One of the things we (I) love about tacos is that everyone can make-to-order. Which means satisfied diners and a lot less work for this chef. So this recipe was a no-brainer addition to our weekly menu 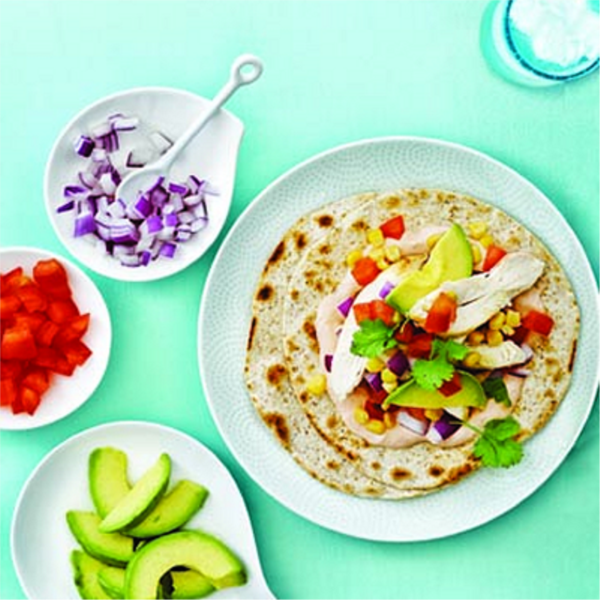 Just like the rising of the sun, you can pretty much count on Taco Tuesdays in our house. But this past week I decided to forgo the usual and try something a little different: Easy chicken tostadas from Chatelaine’s ‘Dinner in 30’ cookbook.

One of the things we (I) love about tacos is that everyone can make-to-order. Which means satisfied diners and a lot less work for this chef. So this recipe was a no-brainer addition to our weekly menu because it follows the same basic rules: you simply present all the ingredients and the family can custom-design their own dinners. The other bonus is that these tostadas call for rotisserie chicken from the deli, so for those busy nights with (too-many) after-school commitments, it’s a ready-in-a-flash meal.

The tomatoes, avocado and onion are chopped, and the corn thawed, and then all are drizzled with the lemon juice and salt mixture. Remember to keep the ingredients separate so people can pick and choose their preferred toppings. We also added grated cheese to the mix because we’re a family that believes everything is better with cheese! The chicken is then coarsely sliced and the sauce is made with a combo of sour cream and a diced chipotle pepper (I found these peppers packed in adobe sauce in the Mexican food aisle of my grocery store).  The chipotle pepper is spicy, but not overwhelmingly so – ideally if you have spice-lovers you’d add two peppers; if spice-averse, maybe add a half a pepper or skip entirely.

While I chopped and combined ingredients, the tortillas were in the oven (brushed on each side with oil) getting crispy. Just don’t forget to flip them every minute or so (ours took less than five minutes to get ‘just right’) so they don’t get too browned. Also, I’d suggest buying the smallest tortillas possible. I bought medium-sized ones and they were a tad large.

Once the tortillas are crisp it’s time for the assembly line. The tostadas were easy to pick up and eat with our hands, and the combination of lemon/salt on the veggies and the sour cream/chipotle sauce made for a super tasty taco alternative.  Might just have to start a new weekly tradition: Tostada Tuesdays!