Breaking down common terms, so you're ready for anything the next time you mix it up in the kitchen. 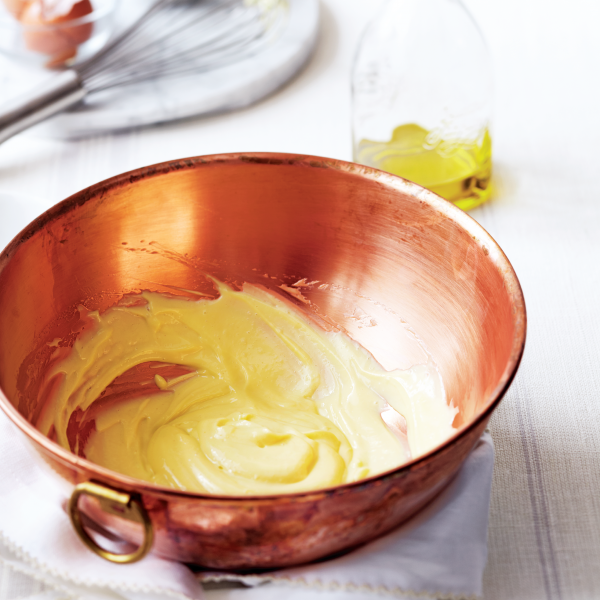 An example of an emulsion (binding two ingredients together that wouldn’t normally mix) is homemade mayonnaise.

Cooking has a specialized language and you’ll find that many of the terms are used exclusively in recipes. Have you ever wondering what it really means to macerate or deglaze? What is happening when something curdles? Here’s a little 101 on common cooking terms:

Sear
Searing is a technique for building flavour. It requires a pan set over high heat to quickly brown the surface of meat and caramelize it (use cast-iron or stainless steel for best results). To get a perfect sear, use a thin coating of neutral oil with a high smoke point (such as canola) in the pan and add the meat in batches for optimal flavour — and remember, only flip the meat once.

Deglaze
Deglazing is a flavour-boosting technique that creates a sauce (known as a fond) by adding cold liquid (such as broth or wine) to a hot pan that has been removed from the heat. This allows the brown bits of flavour that are stuck to the bottom to loosen and season the sauce.

Try this method:
How to make gravy and pan sauce
Lemon chicken with bok choy

Braise
Braising uses two cooking methods, requiring both moist and dry heat. Typically you’ll find tough cuts of meats such as chuck, shank or brisket are prepared using this method, but you can also braise root vegetables and winter squash. First, the food is seared, and then it’s covered with a braising liquid (broth or wine) and cooked at a very low simmer until incredibly tender.

Reduce
Reducing is the process of boiling and cooking down the liquid in a sauce or a soup reducing its original volume. As the liquid boils, it will evaporate creating an intensly flavoured, thick sauce.

Blanch
Blanching is a technique typically used for cooking vegetables. Vegetables are submerged in a pot of boiling water and cooked for 1-5 minutes depending on the vegetable, for example, baby carrots take five minutes while asparagus will blanch for about three.  The vegetables are immediately transferred to a bowl of ice water to stop the cooking process.

Emulsion
An emulsion is a combination of two liquids that normally wouldn’t combine. To get sauce to emulsify, you must use a bonding agent — also known as an emulsifier. To bind the two liquids together you can use ingredients like an egg yolk (for homemade mayonnaise) or Dijon mustard (in a vinaigrette).

Infuse
Infusing is a process of extracting flavour from any aromatic ingredient (such as tea or herbs) by steeping them in a hot liquid (such as water, milk or oil) resulting in a flavourful infusion. These infusions can be used to create flavourful liquids to use as a finishing touch on a dish or to add to sauces and syrups.

Macerate
Macerating involves soaking fruit (fresh or dried) in a flavoured liquid such as vinegar or liquor. It can also be used to describe sprinkling fruit with sugar, which draws out the liquid, creating a syrup. This allows the fruit to soak up the flavour and liquids, resulting in a softer, juicier fruit.

Curdle
When liquid and solids separate, a mixture is curdling. In hot preparations using eggs as an emulsifier or dairy products (custards or hollandaise), the sauce will curdle when overheated. To avoid, heat the sauce gently and be careful not to overcook a sauce.

FILED UNDER: The Kitchen Apprentice