You're counting calories. He wants a burger and fries. What's a couple to do? 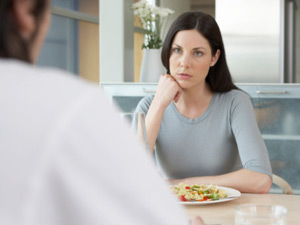 Stacey* labels her tupperware “Wednesday dinner” and keeps it on her side of the fridge. This isn’t a communal kitchen at work. She’s at home, where she shares everything with her husband—except food. “Eating together made me fat,” she declares. “It’s too easy for me to eat four portions of pasta and endless bread. I’m not blaming him, but I needed to do something drastic.” Separate meals have worked for her waistline, but she doesn’t want her real name used because “as a skinny woman with European roots, I feel guilty for not feeding my husband. His family wouldn’t understand.”

Are separate meals the new separate bedrooms: perfectly rational—“he snores”—yet viewed by others as a form of marital treason? “Yes, it’s treason, but symptomatic of our individualistic culture,” says Dr. Sue Johnson of the University of Ottawa, a couples therapist and author of Hold Me Tight. “All over the world, people bond over food rituals. It’s a sacred time together. Not sharing what we eat is another nail in the coffin of intimacy.”

Isa Tousignant, a Montreal-based editor, agrees. A new vegetarian, she fusses over quinoa while her husband, still an enthusiastic carnivore, orders in. “On the weekend, I make batches of vegetarian dishes, but I won’t make his meat.” It’s not an ideal situation, she admits. “I’ve discovered that eating separately is anathema to having a life as a couple. Your Friday night meal isn’t like a date anymore.”

Perhaps this explains the growing occurrence of food rebellion on the homefront, particularly when the justification for solo eating involves a woman’s desire to lose weight. “I call my husband the great saboteur,” laughs Elyn Kirby Arscott, a public relations executive in Toronto. “He even made up a song about undermining my diet when he comes home with burgers and fries.”

Other women view diet sabotage as less than endearing. “My ex would put Lindor chocolates on my bedside table and bring home Wendy’s double cheese burgers, my favourite. Then he’d complain about the wasted money if I didn’t eat it,” says Karen, who feels eating separately contributed to her recent break-up because “our other differences became more intense.”

Linda Hanson, a guidance teacher in Winnipeg, says losing weight “cost me my marriage. He was a big eater who married a fat girl and I broke the deal by changing my habits. He was always undermining me by adding butter to dishes or sneaking alcohol into my drinks.”

“Taking control of food can threaten one partner, who feels judged and abandoned and sees it as a betrayal of their shared pasts and habits,” explains couples counsellor Dr. Jane Greer, author of How Could You Do this to Me? “Is it cheating? No. But it’s a kind of separation that can rock the boat—especially as one partner’s confidence and self-esteem builds. It can mobilize him or her to move out of the marriage for a sexual connection.”

Even for happily married couples, seemingly minor dietary differences can create “a micro-climate of tension, and the fallout can affect your romantic life,” observes Annick Robinson, director of Victoria Park Health Club in Montreal. “It’s the No. 1 complaint I hear from clients,” she adds.

But separate meals don’t have to be the beginning of the end of marital happiness. The way a couple approaches the issue also matters, if one person is a perfectionist with rigid goals, it won’t work. It’s all about negotiation.

Married Canadian musicians Martina Sorbara and Dan Kurtz of Dragonette have done exactly that. “I was raised vegetarian but Dan is so passionate about meat that he made me curious about it.” They share every meal and Martina even indulges Dan’s love of feijoada, a Brazilian dish of black beans and pork. “His Dad lives in Brazil and it makes him nostalgic. I don’t eat the meat but I’ve found I really like its flavour,” says Martina. Dan has also compromised and now eats more fish and pasta. “Although he blames me when he gains weight saying he wasn’t made to metabolise carbs!”

Martina’s advice is to be experimental together. Instead of making separate meals find the middle ground and satisfy both of your cravings. Dan usually cooks her fish when he eats meat, and will enjoys an entirely vegetarian dinner.

Negotiating meals may not be romantic, but it’s a practical solution to combating the aptly named love handles—and may, incidentally, be the best way yet to ensure men do their bit in the kitchen.