The Third Anniversary Of The Quebec Mosque Shooting Was This Week—Did You Notice?

The third anniversary of the massacre was Wednesday, but instead of national commemoration, what I noticed was a lack of recognition. 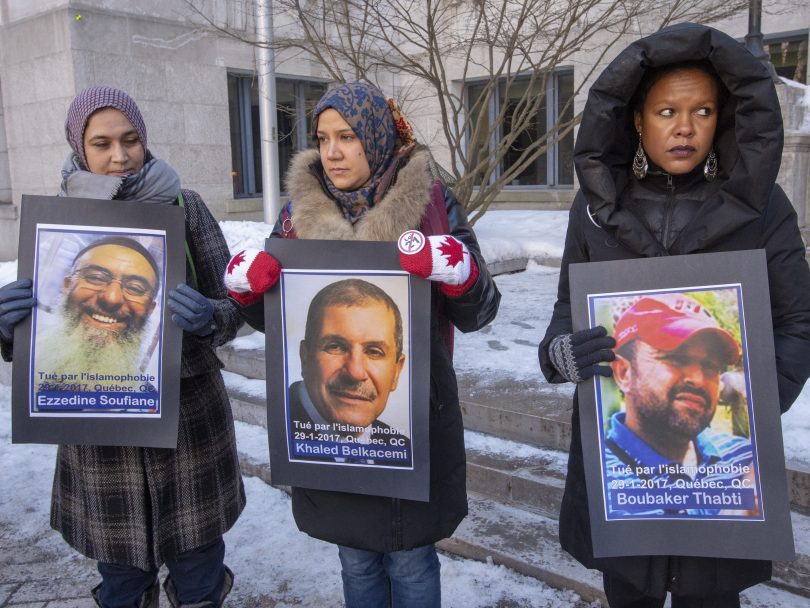 People hold photos of the victims during a vigil, Wednesday, January 29, 2020 in Montreal to commemorate the third anniversary of the mosque shooting in Quebec City that left six people dead. THE CANADIAN PRESS/Ryan Remiorz

Aymen Derbali risked his life on January 29, 2017, by standing in the direct line of fire of a gunman who had entered a Quebec City mosque. In his bold attempt to distract the killer, the father of three was shot seven times and left permanently paralyzed. The third anniversary of his heroism was Wednesday, but instead of national commemoration, what I noticed was a lack of recognition.

To my great disappointment, the mosque attack doesn’t seem to be considered a national tragedy. But whether Canadians like it or not, this hate-motivated mass shooting tells a national story.

In 2018, the shooter pled guilty to six murders and was sentenced to life in prison, with no possibility of parole for 40 years. Derbali was an important presence during the trial and Superior Court Justice François Huot praised him for his “incredible demonstration of courage.” But three years after the shooting, and two after that public praise, I’m afraid of what Derbali sees when he looks at Canada.

I’m afraid of what he’ll conclude about how this country has changed—or not—in the time since he watched his Muslim brothers die. I’m afraid of what the families left behind see when they look at the societal response to a terrible act of Islamophobia, hatred and cowardice. I’m afraid that Muslims, in Sainte-Foy and beyond, will see a nation that did not learn a lesson from this tragedy.

In the years since the shooting, Quebec has seen fit to pass Bill 21. The secularism law bans public servants from wearing religious identifiers like hijabs and turbans, a direct attack on the livelihoods of many, including teachers, judges and police officers. Such singling out of religious minorities only serves to further polarize society. It makes Muslim women who wear hijab easy targets for vitriol, not to mention women who wear the face-covering niqab and have been systemically discriminated against for years.

And, in the past three years, Islamophobia has become increasingly ubiquitous. Last year, Statistics Canada released data showing a significant increase in police-reported hate crimes across the country in 2017, the year of the shooting. Crimes targeting Muslims increased by 151 percent, while Black and Jewish communities saw increases of 50 percent and 63 percent, respectively.

It’s important to note that these numbers do not account for intersectional identities, and that StatsCan confirms that the majority of hate crimes go unreported. They also don’t include online hate and other less obvious, but genuinely harmful, forms of discrimination.

In March 2019, another white supremacist opened fire on two mosques consecutively, this time in Christchurch, New Zealand. That shooter killed 51 people and injured 49 others—and he had the Quebec mosque shooter’s name scrawled on one of his guns. He also live-streamed his massacre, in order to spread this infectious hatred even further.

After the Christchurch shooting, New Zealand’s Prime Minister, Jacinda Ardern, stepped up to take care of her community with compassion and understanding. She immediately called out bigotry on social media, demanding tech platforms take responsibility for hate perpetuated online. Within weeks, her government had banned all assault rifles and military-style semi-automatics.

Over here, Quebec premier François Legault seems to think Islamophobia is a fake thing, one that Canada’s million-plus Muslims have made up in our heads. Around this time last year, when he should have been commemorating the second anniversary of the mosque shooting, Legault told reporters that he didn’t “think there is Islamophobia in Quebec.” He backtracked, weakly, a day later—but the entire time, he was championing Bill 21, which passed in June 2019.

Other politicians have done only marginally better. This week, Ontario Premier Doug Ford and Prime Minister Justin Trudeau merely issued commemorative statements online. Ford’s read, in part, that his government joins the Muslim community “in mourning and honouring the memory of those we lost….” Trudeau noted the horrible anniversary with, “We mourn those who were senselessly killed, and suffered at the hands of ignorance, Islamophobia, and racism.”

Both Ford and Trudeau did use the word “terrorist” to describe the shooter, unlike the criminal justice system. But words are empty if not accompanied by action. The National Council of Canadian Muslims has been advocating to designate January 29 as a National Day of Remembrance and Action against Islamophobia, but the federal government has yet to acknowledge the motion in a meaningful way

For the past three years, I have been thinking constantly about the families who lost loved ones that night. They faced the worst possible attack in the place they call home, the mosque, a place where I grew up.

I went to grade school in a Toronto mosque. I spent my childhood running through its halls and hiding in corridors with my friends, escaping from yelling aunties. As a teen, I gathered there with my friends for Friday evening youth group. The mosque is where we go to eat a free meal upon breaking fast during Ramadan. And it’s where we go for funerals, to pray for souls departed. It’s where in 2017, so close and yet so far from Sainte-Foy, I mourned with my community.

For days afterward, I hovered in doorways at home as my father dressed for winter’s cold, preparing to make the drive to the mosque for night prayer. I thought of all the evenings he’d left with some half-finished task, like an email he hadn’t yet sent, or a mango he had left out to cut for us when he came home. I cried myself to sleep imagining the half-finished tasks of the men who left their homes that night, never again to return.

The attack on the Islamic Cultural Centre of Quebec was an attack on all of us—and by “us,” I don’t just mean Canadian Muslims, but all of Canada. All of us should be in pain. None of us are safe while the ideas that made this attack possible are still very much prevalent and pervasive.

On January 29, 2017, Derbali risked his life, six men died and 17 children lost their fathers. And all of Canada was shown what type of evil can exist on this land, the one that we all share.