The Canadian Civil Liberties Association has filed a lawsuit arguing that the province's restrictions are, among other things, discriminatory towards women. 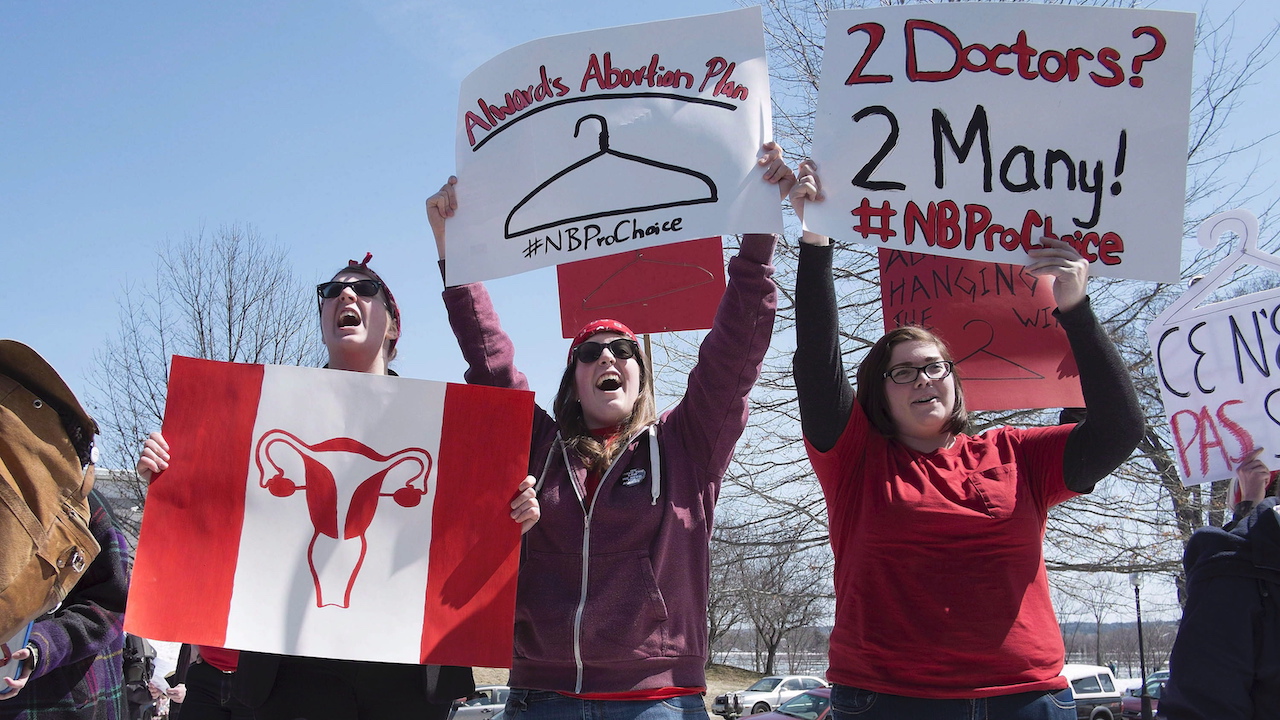 Pro-choice demonstrators rally at the New Brunswick legislature in Fredericton in 2014. (Photo: The Canadian Press/David Smith)

While abortions are technically available in New Brunswick, they aren’t genuinely accessible. This is by deliberate design. In the late 1980s, when Canadian physician Henry Morgentaler moved to open a private clinic in N.B., then-Premier Frank McKenna vowed to give the doctor “the fight of his life.” Thirty years later, just three hospitals in the province provide abortions, none of them in its two largest cities. It’s a setup that has long threatened the privacy, dignity and finances of people dealing with unwanted pregnancies.

In early January, though, a lawsuit filed by the Canadian Civil Liberties Association (CCLA) finally gave those following the increasingly gloomy state of reproductive rights in N.B. a small reason to cheer. A national non-profit defence group devoted to protecting our rights, the CCLA plans to argue that the province’s restrictions are, among other things, discriminatory towards women. Sure, the suit will take years to wind its way through the courts. But for now, its mere existence warrants an interim celebration: It is the most promising step yet towards ending, once and for all, what one former N.B. abortion provider called the “state of legislated misogyny” in the small Atlantic province.

Three decades ago, McKenna entrenched his pledge to Morgentaler by restricting Medicare-funded abortions to hospitals, and only those with “approved” status. Most abortions don’t require hospital resources or operating rooms—the low-risk procedure can be done in doctors’ offices or clinics with a local anaesthetic—but McKenna required that they be performed by gynecological specialists. There was no health-related justification for this. He also ensured that women with unwanted pregnancies were required to get the approval of two doctors deeming the procedure “medically necessary” before being granted permission to undergo abortions. That bit of patriarchal gristle wasn’t struck from the ledger until 2015 (!!!).

By then, Morgentaler’s private Fredericton clinic had opened and then been forced to close down in 2014, a year after his death: It was chronically unable to meet its expenses, largely due to the costs of a 20-year legal battle with the province, but also because those who couldn’t afford its $700 fee weren’t turned away. The only private abortion clinic east of Montreal, the clinic provided more than 10,000 abortions during its existence. To say there was a need for it is an understatement.

In 2015, a new private family practice offering abortions, Clinic 554, opened inside the old Morgentaler space, maintaining the same pay structure and policy. Clinic 554 was the only place in the province that women could get a surgical abortion out of hospital, as well as also the only place in N.B. that specialized in trans health care. It shuttered in late 2020, prompting public outcry–abortions will remain available by appointment until the building sells, says Dr. Adrian Edgar. Like the Morgentaler clinic, Clinic 554 simply can’t sustain the cost of operating while sustaining the cost of warring with the province and also upholding its policy of not turning away those who needed its services.

Today, it remains extremely difficult to get an abortion in N.B. Mifegymiso, the abortion pill, is covered under provincial health insurance, but it is not widely prescribed and can only be used when a pregnancy is at less than 10 weeks (many of us only learn we are pregnant around eight to 10 weeks, which leaves scant time to complete the ultrasounds often required to wrangle a Mife prescription in N.B.).

Provincial rules still require surgical abortions to take place in hospital (that is, if a doctor wants to be paid for performing the service via the provincial health insurance system, and, understandably, most do). But only “approved” hospitals can offer abortions, and of the 20 hospitals in the province, only three have “approved” status.

Bizarrely, two of those are in Moncton, population 70,000, at hospitals with some of the most overstretched operating rooms in the country: A recent Fraser Institute report ranked N.B. as having among the longest wait times in the country for “medically necessary elective treatments.” It takes about 39.7 weeks to receive treatment from a specialist in N.B., just a hair shy of an entire pregnancy. But I digress.

The third hospital that allows abortions is in northern Bathurst, home to just 13,000 people. That means women in the province’s two largest cities, Fredericton (where Clinic 554 just closed) and Saint John, must leave town if they need abortions. I’ll also note that the “approved” hospitals only provide abortions up to 13 weeks and six days of pregnancy; before Clinic 554 closed, hospitals referred later-stage patients to its physician. Now the only option for termination at later stages involves out-of-province travel.

There is a laundry list of reasons that the current setup in N.B. is bananas. There’s the inconvenience and cost of travel for those who can manage and afford it at all: It’s almost certainly an impossible barrier for many who are underage, in poverty, enduring domestic violence or facing other hardships. Such restrictive access to abortion is also a threat to privacy, dignity, mental health, and employment stability.

And, I shouldn’t have to say, it’s a threat to a woman’s right to make key choices regarding her health and her body.

The list goes on and unreasonably on for a medical service that is fairly time sensitive but is about as common and low-risk as, say, a vasectomy (which the CCLA points out is available across N.B. in a variety of non-hospital settings because the law does not bar doctors from being paid to perform them). Even the federal government appears to agree—in an effort to pressure the province to provide reasonable access to abortion, Health Minister Patty Hajdu withheld some transfer payments last year (she ended the hold when the pandemic struck).

Stubborn provincial lawmakers have been allowed to protect the outdated status quo in N.B. for about three decades, which is about three decades too many. Now, to the relief of advocates local and beyond, the CCLA has seized the smouldering torch and reinvigorated the abortion access battle in the province. When their day in court comes, its lawyers will argue that N.B.’s stance on abortion violates both the Canada Health Act— designed to support universal health care, the act describes what health services provinces must provide in order to receive federal transfer payments—and the Charter of Rights and Freedoms.

The organization’s statement of claim argues that the perceived “socially undesirable” nature of abortions isn’t reason enough to limit access to them any longer: “Pregnancy discrimination is sex discrimination,” it insists. None of us—including the government of N.B.—truly needs a judge to verify this.

Correction: This article has been amended to reflect that Clinic 554 will continue to perform abortions until the building that it’s in is sold.