As A Muslim, I Face Islamophobia. As An Immigrant, I’ve Failed Indigenous People 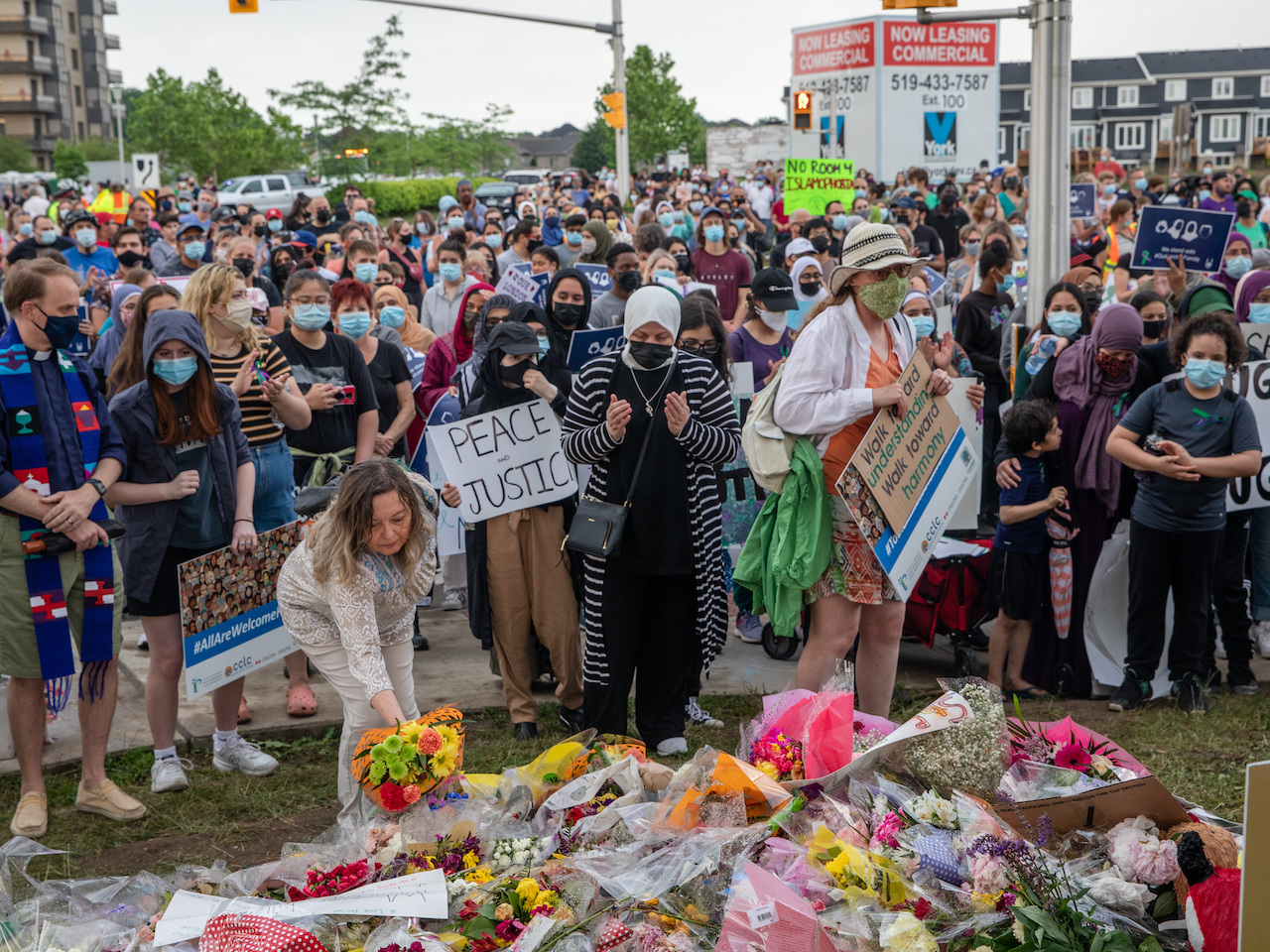 People at the scene where a Muslim family was killed in a vehicle attack in London, Ont. (Photo: Brett Gundlock/Anadolu Agency via Getty Images)

On June 8, I was in London, Ont., watching a blue flag with a white infinity symbol flutter high above a crowd of thousands. They had all gathered to mourn and honour the Canadian Muslim family that was killed in a hate-motivated attack just two days before.

It was the largest, tallest flag at the vigil. It was attached to a long white pole held by a man dressed in jeans and a white shirt, with a colourful, woven belt wrapped around his body. When the crowd was quiet or when a Quranic prayer was being recited, the man would clench the pole with both hands and wave the bright blue flag in the grey and cloudy sky.

I am ashamed to tell you that I did not know what the flag represented.

I am ashamed to tell you that I had to pull up my phone and type “blue flag infinity” into Google.

I am ashamed to tell you that it was only then that I learned that it was the flag of the Métis nation.

When I learned, I decided to go talk to him. I made my way through the crowd, walking past people dressed in traditional Pakistani and Arab clothing, in t-shirts with anti-hate messaging and in rain jackets and hats with the logos of Canadian sports teams. I asked the flag holder why he was here. He paused and said one quick line: “The Métis Nation is here in solidarity with the Muslim community and condemns what happened to our brothers and sisters.”

I thanked him and walked away with an immense sense of grief and guilt. A woman just behind the man stopped me to ask what the flag represented. I later watched her tap his shoulder and say thank you, to which he responded with a hand on his heart.

In the week before the attack on the Afzaal family, bouquets of flowers, children’s shoes and stuffed animals piled up outside schools, city halls and traffic stops across the country, after a mass grave was found on the grounds of a former residential school in Kamloops, B.C. The ink on statements mourning the lives of those Indigenous children had barely dried when the statements condemning Islamophobia began.

This wasn’t the Canada I thought I was moving to. But over 10 years later, I understand that this is what Canada really is.

When my family moved to Canada from Pakistan, we weren’t told that this was a land built on genocide and erasure. No one would want to move to such a country. Instead, we believed that Canada was “an economic opportunity.” We believed it was “the greatest multicultural country in the world.” We believed it was “a safe country.”

It didn’t take me long after we immigrated to Canada to realize that none of that is true. It took me much longer to realize that immigrants are also part of the problem: We are guilty of Indigenous displacement. I think many of us are just starting to realize it, and very slowly.

When you apply to become a Canadian, you’re told how to get a job, how to vote, and the great contributions of revered (white) Canadians. You’re barely taught anything about Indigenous history, culture and communities—there are barely two pages of information on the topic in Discover Canada, the study pamphlet every immigrant is tested on before being granted citizenship.

You’re not told that there are more than 630 First Nation communities in Canada that represent more than 50 nations, and that none have any say over how many people are allowed onto their land. And nowhere in that book are you told your obligations to those nations.

The more I reflect on the discovery of young Indigenous bodies on the sites of residential schools, the more I realize that the term “immigrant” is a misnomer. We, too, are settlers; we are people who chose to migrate to new, distant lands and establish permanent residence.

Yes, we meant to do so in a non-violent way. And it’s hard to call ourselves settlers because many of us have escaped or left behind instability, uncertainty, persecution or war. Immigrants are often the survivors of their own history of colonialism—the reverberations of which still exist in countries like Pakistan, India, the Philippines, Lebanon, Egypt and others—but the truth is that when we make our homes in Canada, we are repeating the same action and have been for decades. We are being invited to create homes on stolen land.

While my family may have not done so with that intention, our moving here was still part of ongoing Canadian colonialism. The only slight saving grace is that we didn’t know it.

We’re also grappling with our relationship to each other, which many of us are thinking about properly for the very first time. In recent days, I’ve watched immigrant community organizers reach out to Indigenous partners to organize vigils and information campaigns, about both mass graves at residential schools and Islamophobia. I’ve heard from immigrant kids whose parents are asking them how they can learn more about reconciliation, and offering prayers for Indigenous families. I’ve seen social media posts from aunties and their kids alike suggesting Indigenous businesses to support in these very trying times.

The confluence of the Kamloops discovery and the London attack have made me, an immigrant from Pakistan, question what it means to be a good ally while you’re also suffering.

What is my duty to the Indigenous people whose lands I am on, who have suffered more deeply and in greater silence than my communities have?

Should I even be in Canada?

In the wake of the Kamloops discovery, I am deeply troubled by my role as an immigrant in Canada and how little I know about what I should do to address it. I am also deeply troubled that I could walk down the street tomorrow and be a target of deadly Islamophobia. I cannot reconcile the two, nor can I separate them.

What I have realized is that the ties that bind immigrants and Indigenous peoples together in Canada are rooted in hate. We have both experienced it. We have both lost families and loved ones to it. We are both still fighting to end it. And in spite of all the hardships, we are both still determined to hold on to our cultures and true, full selves.

Realizing the parallels makes it all painfully clear: Immigrants are in lockstep with Indigenous peoples, or at least we should be.

The day after the London vigil, I had a conversation with an Indigenous friend. She looked at me through the computer screen and said “I’m so sorry, Fatima.”

I looked back at her through our computer screens. I looked at her brown skin and mine, at her Indigenous name and my Pakistani one, neither of which people pronounce properly. I paused and with a broken voice said, “I’m sorry, too. For everything. Especially the things I still don’t know.”