The Cost Of Taking Groceries For Granted: Canada’s Food Labour Bill Is Coming Due

Meat-plant workers are sick and migrant farm labour is scarce. Their jobs have always been risky and underpaid, and it's finally affecting the rest of us.

As pork, beef and poultry plants across North America cope with outbreaks of COVID-19, two issues loom large: the effect on our food supply, and the effect on industry workers. The United States has decided which is more important–on Tuesday, American meat plants were deemed essential infrastructure that can’t close without federal permission. On Wednesday, Prime Minister Justin Trudeau neither committed to nor ruled out doing the same here. “The priority is both things,” he said. “Keeping people safe and ensuring a good supply of food to Canadians.”

Priority, though, is a singular word. There’s a choice to be made, and workers will not be safe if the meat business goes on as usual. The coronavirus has had a devastating toll on them: at a Cargill plant in High River, Alta., 821 workers had tested positive for COVID-19 as of Thursday, the country’s largest outbreak linked to a single site. One worker, a woman in her 60s, has died. Other plants haven’t been hit as hard, but numbers are quickly climbing, and there have been shift reductions and temporary shutdowns from B.C. to Quebec.

The pandemic is breaking multiple links of Canada’s food supply chain. Many farmers are scrambling to find workers. Spring usually brings tens of thousands of foreigners to Canadian fields, most from the Caribbean and Latin America via the Seasonal Agricultural Workers Program (SAWP). This year, COVID-19 has thrown multiple wrenches into that process, including a 14-day federal isolation requirement when workers land.

It’s not clear yet whether significant food shortages are a real risk–Trudeau said he’s watching the issue with “concern.” But it’s inevitable that consumers will be affected eventually. Higher costs are almost certainly on the horizon, and maybe that’s a necessary correction. Prices at Canadian supermarkets have never reflected the true value of the labour that goes into stocking them.

As in other rich countries, underpaid workers from poor countries have long kept Canada’s food industries running. Now, Mexicans and Central Americans have a new reason to avoid the U.S. and Western Europe is desperate for seasonal workers from Eastern Europe and Africa. In Canada, and elsewhere, fears about availability and cost are accompanied by another worry–that the risks long endured by food industry workers might spill over onto the rest of us.

The state of farm workers’ housing is just one example. Last year, the Toronto Star reviewed thousands of complaints about everything from rats and bedbugs to a lack of working sinks. Such conditions were always dangerous for workers, as well as undignified, and a violation of their rights. It’s only now, though, that a COVID-19 outbreak in a cramped dormitory threatens Canadians’ health, too. 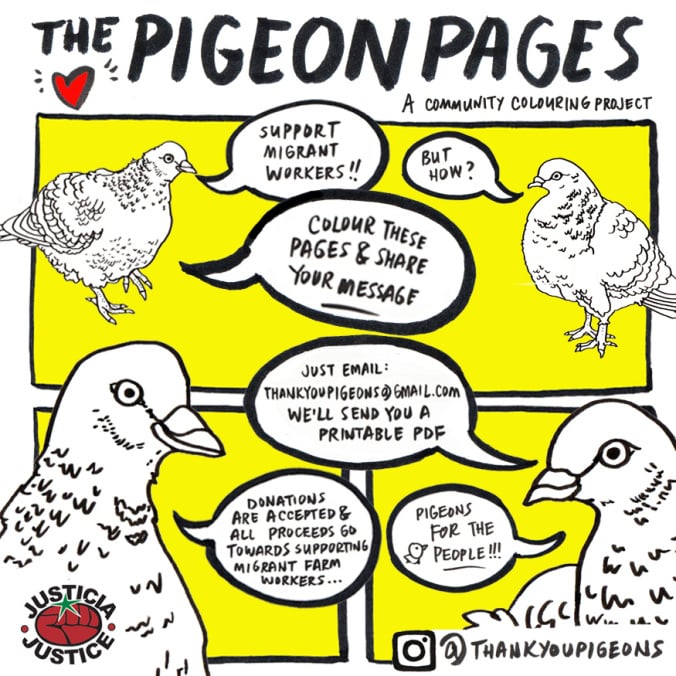 A page from a colouring book being shared by Justicia 4 Migrant Workers.

And so, worried Ontario farming communities are imposing new housing rules. In Windsor-Essex County, that includes soap (presumably at functional sinks) for all that coronavirus handwashing. In Haldimand-Norfolk County, bunkhouses for those who are self-isolating are limited to three residents, a public health stipulation that one local farmer told TVO “doesn’t make sense.”

Amazingly, the same farmer said that replacing SAWP workers with unemployed locals isn’t as easy as it sounds. Many foreign workers have been back and forth between his farm and their home countries for five or more years, and are some of his “core people.”

They also tolerate conditions most Canadians wouldn’t: the average migrant farm labourer here works 10 to 12 hours a day, six days a week, with no overtime or vacation pay, according to the new book, Uncertain Harvest: The Future of Food on a Warming Planet. In it, food security researchers Ian Mosby, Sarah Rotz and Evan D. G. Fraser argue that Canada’s food system owes SAWP workers a path to citizenship. Clearly, their skills are needed here.

But as for so many essential workers, respect and protection are hard to come by, even now. A JBS plant in Brooks, Alta. isn’t shutting down to contain its outbreak, even temporarily: instead, the company is offering short-term disability to workers who are pregnant, over 70, or otherwise vulnerable.

In Chatham-Kent, Ont., 47 workers at the greenhouse Greenhill Produce have tested positive. Even though there are significant profits on the line–800 tractor trailer loads of peppers may end up rotting–the advocacy group Justicia for Migrant Workers (J4MW) believes that staff there still aren’t being protected. J4MW just shared a message, purportedly from a Greenhill worker, that as of April 24, “the positive and the negative are living in the same house using the same utensils, same bathroom…”

“We ask for sanitizers to help kill the spreading of the virus in such a crowded place…,” the message continued. To draw attention to the problem, J4MW is sharing a colouring book online–completed pages can be turned into posters or social media posts.

The Greenhill worker’s request for anonymity is unsurprising. Foreign workers’ immigration status is usually tied to individual employers, making them reluctant to report bosses who violate rules and regulations. Again, that’s always been trouble for them, but now it’s trouble for everyone. In both Chatham-Kent and High River, the outbreak is also in the larger community.

About 70 percent of Cargill’s employees in High River are Filipino, some permanent residents, others with more precarious status. As community advocate Cesar Cala told CBC, “Many of the temporary foreign workers, their stay in Canada is based on their work visa connected to Cargill.” They do have a union, which asked for a cleaning and inspection closure in mid-April.

But it took hundreds of positive diagnoses before the plant announced a temporary shutdown on April 20. Now, over a quarter of its 2,000 workers have COVID-19, and the Alberta Federation of Labour is demanding a criminal negligence investigation into one death.

When COVID-19 hit Canada, the result was supermarket shelves, stripped completely. Things have stabilized since then, but it’s likely that a new round of panic will hit meat departments this week. This is just the start, though: many farmers are way behind schedule for planting. Asparagus pickers are already scarce in B.C. and Ontario, where an industry spokesperson has worried that a significant amount of the province’s crop will stay in the ground this year.

Most Canadians aren’t used to such instability, in large part because of the risks offloaded onto migrant workers. Well, our food has been bought on credit for a long time, and now the bill has come due.