‘When You Know It’s Right, It’s Right’: Elizabeth May Is Getting Married

Anne Kingston: Life’s surprises aren’t all bad — they can also include unexpected love and joy. 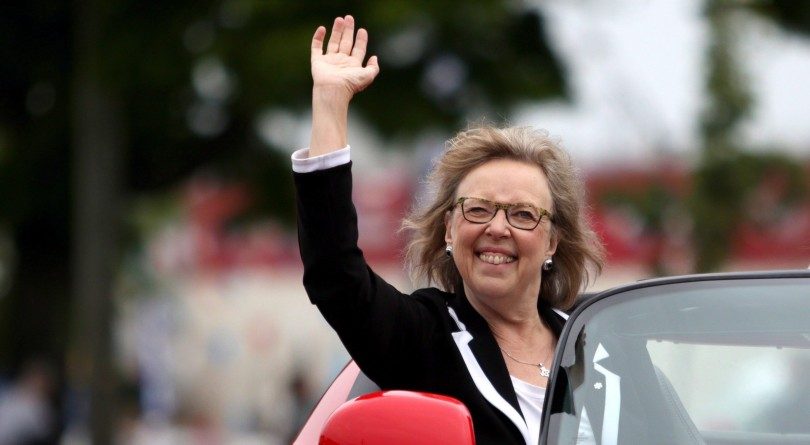 Green Party Leader Elizabeth May waves to the crowd as she rides in a sports car along Douglas Street during the annual Victoria Day Parade in Victoria, B.C., on Monday, May 21, 2018. (Photo: Chad Hipolito/CP)

On a day filled with grim news — layoffs of thousands of GM workers in Oshawa, Ont., as federal Conservative leader Andrew Scheer tried to make political hay by blaming the carbon tax, and the U.S. president said he didn’t believe his own government’s dire climate report — the happy announcement that federal Green Party leader Elizabeth May was marrying for the first time at age 64 was more than a welcome respite: for a fleeting moment, one could hear bluebirds chirping, woodland animals cavorting, and be reminded that life’s surprises aren’t all bad; they can also include unexpected love and joy.

We have a very special announcement.

Our fearless Leader, @ElizabethMay, is engaged to be married! Congratulations to her and her lucky partner, John Kidder!” We’re so happy for you both. pic.twitter.com/a83zjXcSRc

News of May’s engagement to John Kidder, a 71-year-old B.C.-based technology entrepreneur who runs his family’s hops farm, was announced via a congratulatory tweet on the Green Party’s Twitter feed. Attached was a photo of the couple in the Library of Parliament, taken days after their November engagement — May, who represents the federal B.C. riding of Saanich-Gulf Islands, appears radiant as Kidder leans over and kisses her on the forehead.  In the comment thread, May, who holds the distinction of being arrested and engaged in the same year, calls herself “a very fortunate woman.”

The new couple clearly share political passions that their union is destined to amplify. In 1983, Kidder, who includes “cowboy” and “fish buyer” on his CV,  helped found the Green Party of B.C., the first Green party in North America. May was elected leader of the federal Greens in 2007 after a career as a high-profile lawyer and environmental activist. Kidder ran under federal Liberal banner as a candidate in the Okanagan-Coquihalla riding in 2011, coming in third. The two met in 2013 when May traveled to B.C. to support Kidder’s ultimately unsuccessful candidacy as a provincial Green Party candidate. Kidder recalls finding May “charming in every way” when they met.

They were nudged together by May’s friend Sylvia Olsen, the mother of Adam Olsen, the Green member of the B.C. legislature for Saanich-North and the Islands, who convinced May she should consider dating. The romance reportedly ignited at the Green’s 2018 convention in Vancouver in late September amid sexy talk of proportional representation and connecting with voters in order to increase Green representation in the House of Commons to more than the one seat held by May: “the sparks flew,” Kidder told Penticton Western News. He proposed a month later. “We’re “ideally well-suited,” he says: “We both know how difficult political relationships are, but we’re both able to deal with this.” May echoed the confidence: “When you know it’s right, it’s right.”

Historically and mercifully, Canadians have not looked to politicians as romantic role models, nor cared particularly about exposing their relationships. The rapture over the 1971 surprise wedding of Pierre Trudeau and Margaret Sinclair subsequently undercut by the couple’s messy, high-profile divorce 13 years later left a legacy. That said, there’s no question that in year 2018, engagements and weddings grab the sort of attention politicians and advocates find useful. The oft-told story of how Justin Trudeau proposed to Sophie Grégoire — rose petals, oysters, his-and-hers spa treatments — was once recounted on Liberal.ca but has since been removed. And in January, federal New Democratic Party leader Jagmeet Singh ripped off the protective lid he kept on his private life when he invited several members of the media to witness (and report) his “surprise” proposal to Gurkiran Kaur at a private party at the Toronto vegetarian restaurant where they had their first date.

As a politician, May has always forged a singular path, often by the side of her now-adult daughter Victoria May. She’s known for a steel-trap mind and incisive remarks, be it about lack of civility in the House of Commons or blasting the Liberals’ carbon tax plan. It’s novel to hear her gush with the kind of giddiness being head over heels in love brings whether you’re 24 or 74: “I had a crush on him, and he had a crush on me,” May told the CBC. “It was kind of like high school.” May revealed to the National Observer on Tuesday that Kidder eagerly proposed several times, including in the Parliamentary Library and Parliamentary Dining Room.

The fact that Kidder and May found one another later in life gives their love story an added poignancy, a point May herself made to the CBC: “I’m in my 65th year; to find true love is a miracle.” She wasn’t looking, she says: “I didn’t have time. I said, ‘I don’t need a partner.’ I’m really busy. I’m quite happy as a single woman.”  It’s also impossible to live six decades without having an acute appreciation of life’s fragility. Kidder’s siblings include the actor Margot Kidder, who died earlier this year.

The nuptials will take place in Victoria on April 22, on Earth Day. The eco-conscious couple will honeymoon on VIA Rail, as they travel from Vancouver to Ottawa. Of their shared life ahead, Kidder is joyfully optimistic: “I’m looking forward to a glorious time together,” he said.  So is May: she has “never been happier” she tweeted, a personal and political reminder that renewal is always possible, even when you least expect it.