The Death Of Cindy Gladue, And The Criminal Defence Tactic That Should Alarm Every Woman in Canada

Canadian experts have noted a rise in attempts to argue that a woman's severe injuries or death resulted from consensual sexual activity. 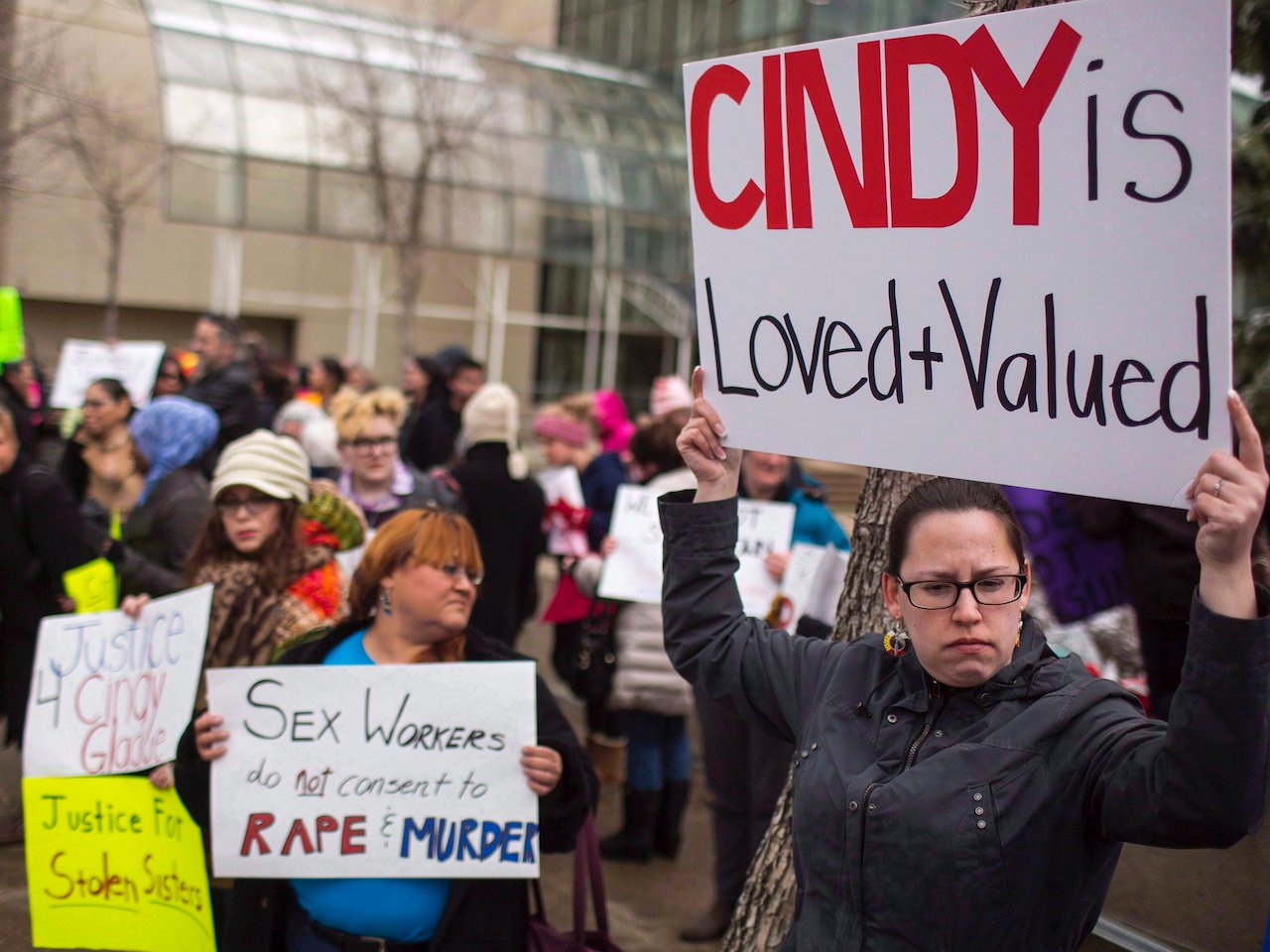 Protesters outside Edmonton’s city hall in 2015, in support of Cindy Gladue. (Photo: THE CANADIAN PRESS/Topher Seguin)

In mid-February, almost 10 years after Cindy Gladue died, Bradley Barton was found guilty of manslaughter. The verdict was the culmination of a half-decade legal battle for Gladue’s mother Donna McLeod, during which she had to endure repeated and graphic descriptions of the sexual violence Gladue endured in her last hours, and her daughter’s total dehumanization by Barton and his lawyer. Lisa Weber, a Metis lawyer with close ties to the family, says they feel a mix of exhaustion and energy after the verdict. And just as their mourning isn’t over, neither are the ways that Gladue’s death and Barton’s trial will echo throughout the Canadian legal system.

In 2011, Gladue was a 36-year-old mother of three daughters. She was a Metis and Cree woman. That June, she met Barton, a truck driver from Ontario on a fateful night at the Yellowhead Inn in Edmonton where, after a sexual encounter, Gladue bled to death from an 11-inch tear inside her vagina. By his own admission, Barton inflicted the injury, by placing his fist inside her and thrusting for 10 minutes. But in what is the newest version of the age-old “she asked for it” defensive strategy, Barton’s attorney spent a significant amount of time trying to convince the jury that Gladue liked “rough sex,” and that her death was a tragic accident resulting from a sexual encounter she consented to. This should alarm all Canadian women.

Barton was originally charged with murder. His first trial was in 2015, the first time his defence argued that Gladue had consented to “rough sex.” He was eventually acquitted. “This case will always be seen as symbolizing the dehumanization of Indigenous women by the criminal justice system” says Dr. Lise Gotell, an academic at the University of Alberta who writes on gender, law and sexual violence. Judge Robert Graesser erred in so many ways, including allowing the defence to introduce Gladue’s previous sexual history, which is not allowed under Canada’s rape shield law. He also failed to educate the jury that consent to any form of sexual activity does not extend to consenting to considerable force. Consent is an ongoing conversation, not a one-time agreement.

The so-called “rough sex” defence has been attempted in over 100 trials in Canada since 1995, says Gotell. And her research suggests it’s being used with increasing frequency in cases of sexual violence that ends in murder or serious harm. Otherwise known as the “Fifty Shades Of Grey Defence” (after the erotic novel of the same name), it’s a tactic employed by people accused of murder or manslaughter who claim that the injuries causing death happened during the course of consensual sexual activity. The most famous usage in Canada was by former CBC radio host Jian Ghomeshi, during his 2016 trial on charges of sexual assault and resistance by choking. Although his eventual acquittal was partly due to seeming collaboration on the part of his accusers, it was the “rough sex” defence he used before both the legal court, and the court of public opinion.

“When you advance this kind of defence, what happens is that the emphasis shifts to the victim or the complainant and their behaviour” says Gotell. She says that research findings in the United Kingdom have shown that using it means that “the responsibility of the perpetrator is minimized. This defence often reduces their culpability, so what may have been a murder trial ends up being manslaughter instead.”

In Britain, where the project We Can’t Consent to This tracks the use of this strategy, millionaire John Broadhurst left his partner Natalie Connolly to bleed to death at the bottom of a flight of stairs after inflicting her with over 40 injuries. He pled guilty to negligent manslaughter—not based on those injuries, but rather on his failure to seek medical treatment as she lay dying.

Like Gladue, Connelly was portrayed as responsible for her own death because of her purported enjoyment of “rough sex.” And Barton’s guilty verdict was also due, in part, to what happened after he injured Gladue: After waking up to her lying in a bathtub covered in blood, Barton did not call anyone to help her. Instead, he used a towel to wipe her blood off his feet, then left her in the hotel room while he went to ask a coworker for advice on what to do. During the trial, Crown prosecutors accused Barton of wrapping Gladue in a bed sheet, which was found stained with blood and crumpled beside the bed, and dumping her into the tub.

Even his second trial was disturbing, says Weber, who was a volunteer with the Institute for the Advancement of Aboriginal Women at the time of the first trial, and became involved with the family after Barton was originally acquitted. The defence wanted to introduce a now well-known, undated photo of Gladue where she is sitting down, looking at the camera and holding a cigarette to her mouth. Weber says this was an indirect way to emphasize that Gladue was Indigenous.

And, of course, Barton’s lawyer attempted the “rough sex” defence at the second trial, trying somehow to convince the jury that Gladue was both drunk enough to not feel the pain of the injury, yet sober enough to properly consent. This time, it didn’t work. On February 19, after a six-week trial and eight hours of deliberation, the jury found Barton guilty of manslaughter. He hunched over and looked down as the verdict was read. A date for his sentencing hearing will be set next week.

Criminal justice is a jigsaw puzzle. One piece doesn’t tell us very much, but as cases increase and precedents are set, the overall image begins to come into view. Last year, the U.K. passed a bill to protect victims of domestic violence. It bans “consent for sexual gratification” as a defence for causing serious harm or murder in England and Wales. But in Canada, the Supreme Court hasn’t weighed in on whether you can consent to bodily harm in a sexual context. This remains a gap in the legislation, one that researchers like Gotell want closed, for the improvement of Canada’s response to sexualized violence.

Cindy Gladue isn’t here to tell her side of the story. Her voice was taken away from her. And while there seems to at last have been some justice for her, a lack of clarity of what consent means in the Canadian judicial system creates a dangerous grey area for women. We need to pay attention.