Microplastics are everywhere—we're even eating and breathing them. 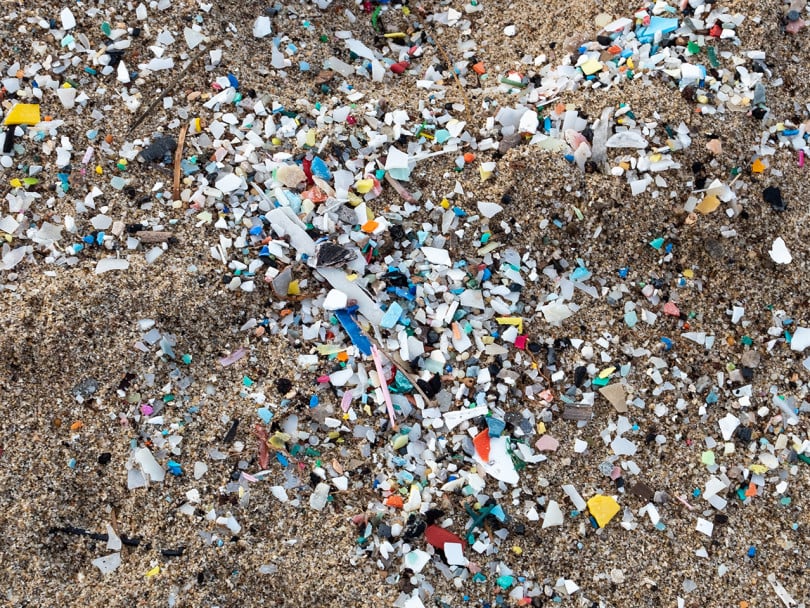 In the midst of a climate crisis with carbon dioxide levels at their highest ever and scary weather extremes, there is also growing concern about plastic pollution and what we should do about that. It’s a difficult question to answer in such a plastic-dependent society, especially because it turns out the most-pervasive kind of plastic pollution—microplastics—is too small for current technology to clean up.

What are microplastics and where do they come from?

Sam Athey, a PhD candidate at the Rochman Lab of the University of Toronto (which studies anthropogenic—that is, human-made—contaminants in the environment) explains that microplastics are “particles less than 5 mm in size.” Sometimes they are deliberately made to be that small—such as the microbeads once commonly used in exfoliating beauty products before they were banned in July 2018—or they are the result of larger pieces of plastic breaking down, everything from plastic-lined paper cups to plastic car parts.

In other words, “microplastic” is a catch-all term that encompasses various types of plastics, shapes, and sizes. They could potentially all have different effects on animals (including humans), plants, and other organisms and their environments.

Athey explains that microfibres—tiny particles that come off of textiles, like the lint caught in your dryer—are some of the worst household-produced offenders, since everyone washes and wears clothes regularly. (Think of the pilling and fraying on your polyester clothing—which is made from plastic—that’s a microplastic.)

If microplastics are so small, what’s the big deal?

To put it plainly, microplastics are now everywhere—researchers have found them in even the most remote areas of the world, from the deep sea to the Alps. “It is a good indicator to the extent in which we are influencing the planet,” says Covernton. Microplastics are too small for most sewage treatment plants to filter out, and even if plants are equipped to catch them, a Vox article points out that those microplastics end up in fertilizer—which is concerning when chemicals associated with plastic manufacturing are considered, like BPAs (which your body confuses for estrogen) and PFAs (which are known as “forever chemicals” because they don’t break down as easily in the environment, and are commonly used for water-, heat-, and oil-resistant products). And microplastics won’t biodegrade.

Microplastics aren’t just pervasive in nature—a study from the University of Victoria’s Dower Lab found that we’re consuming an average of at least 39,000 to 52,000 microplastic particles per year through common foods and drinking water, and we’re also inhaling 35,000 to 69,000 particles annually (depending on your age and sex).

Microplastics are everywhere. Even in the air you breathe. Listen to Rachel Chen talk about it on The Big Story podcast.

We’re eating and breathing microplastics?! What are the health risks of that?

Garth Covernton, a researcher who worked on the UVic study, says there isn’t enough evidence for us to be panicking about microplastic consumption just yet. The area of research studying the health effects of microplastics on organisms (including humans) is relatively new, so we currently don’t know much about their long-term effects.

There is, however, already some information out on how microplastic consumption is affecting other organisms. For example, one study found “warning signs” of endocrine disruption in adult fish from ingesting plastics, and another found that leachate from polystyrene (foam) cups is toxic to some aquatic species.

So far, though, the physical dangers of microplastics are clearer than the chemical risks. Larger animals have eaten big chunks of plastic and been tricked into thinking they are full—until they starve to death. And microplastics can do the same to tiny organisms like larval fish. “They end up being smaller—they aren’t eating the food they need to grow,” explains Athey. Since larval fish and other zooplankton are part of the ever-important food chain, feeding larger animals, maintaining their health is important and the effects of eating microplastic-laden seafood on higher-ups in the food chain is still a new area of research.

What is the best thing I can do to stop contributing to microplastic pollution?

One of the main ways that households directly contribute microplastics into the environment is while doing laundry, because it deposits microfibres directly into waterways. (See a few paragraphs above about them being too small to be filtered out by most water processing plants.) The Rochman Lab found in a study that the best thing consumers can do to directly counter microplastic pollution is get a microfibre filtre for their laundry machines, like the Lint LUV-R. There are also more affordable new products on the market that catch microfibers in the wash such as the Guppyfriend (a washing bag) and the Cora Ball (a laundry ball). (The study found that the Lint LUV-R filter caught 87 percent of microfibres in a test load of a fleece blankets; the Cora Ball captured 26 percent by count.) Other factors that can help are washing clothing less often, using a front-loading machine (top-loaders have a central agitator that makes clothing shed more), and washing a full load. “Using settings on your washing machine that use less water is good for water usage anyway, and energy usage—because it takes energy to heat that water. Also, using less water can lead to less fibres being lost in the wash,” explains Athey.

While zero-waste blogs tend to tout switching to natural fibres as a solution, Athey says that doesn’t help as much because even fibres like organic cotton are persistent (in other words, unlike plastics, they will biodegrade eventually—but they still stick around for a long time). On the consumer side, it is better to look for higher quality textiles with tighter knits because they won’t shed as often.

Are there any solutions on the horizon?

Covernton points to policies such as British Columbia’s Product Stewardship recycling program, which emphasizes “extended producer responsibility”—the idea of putting the onus on industry to manage the life cycle of their products and dispose of them properly (for example, making products more easily recyclable). Ottawa’s single-use plastic ban is also an example of how public pressure can impact policy.

There is no way to look at pollution—plastic or otherwise, in isolation. “I think it’s important not to get laser-focused on one issue, and instead keep your general [environmental] footprint in mind,” says Covernton. Currently, the effects of plastic pollution (of all sizes) appear less dire than the proven effects of greenhouse gas emissions. Microplastics might not kill us like climate change can, but by becoming more conscious consumers in general, we become smarter about using the precious non-renewable resources the earth has to offer.