It's the biggest political story of the year. 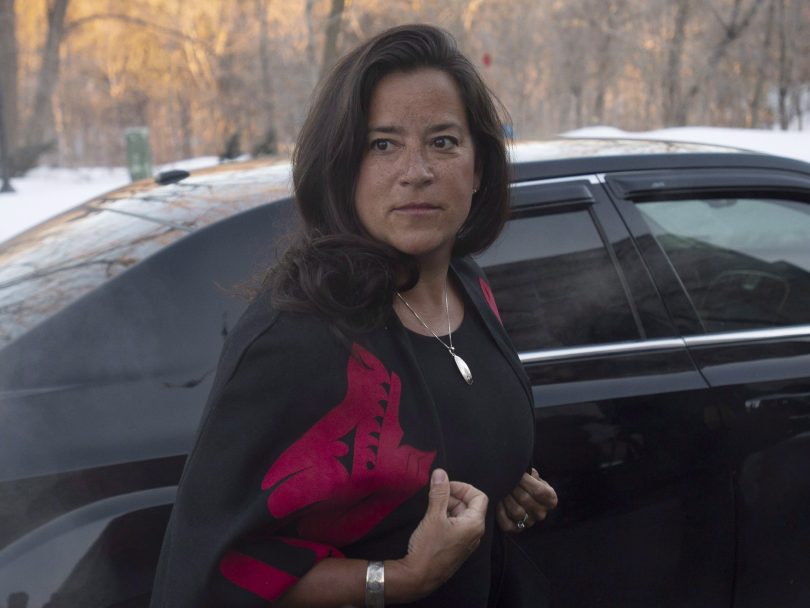 Ejections from the Liberal caucus, resignations, investigations and an ongoing uproar: The firestorm that is the SNC-Lavalin saga is going strong. And it’s not just a matter of whether Prime Minister Justin Trudeau and his office tried to interfere with the potential criminal trial of Quebec engineering firm SNC-Lavalin, allegations that originally came to light in early February. Also very much at stake: the upcoming federal election.

Here’s what you need to know about the biggest, messiest political story of the year.

Who’s been ejected from the Liberals?

On Tuesday night, the prime minister announced that he was kicking Wilson-Raybould out of the party. A visibly shocked Wilson-Raybould told media that she was “to put it lightly, disappointed. If you stand up to what you believe is right and you hold strong to your principles, the truth and principles must always come first.” She also said it was “unconscionable to tread over the independence of the prosecutor.”

“I do regret that the Prime Minister never took responsibility,” she later told the Globe and Mail. “I believe [I] was penalized for doing my job.”

The former justice minister and former minister of veteran affairs had previously resigned from Trudeau’s cabinet amid allegations that the government pressured her to cut a deal with SNC-Lavalin, which has been accused of paying bribes to Libyan officials in a scandal that has been roiling for more than a decade. On February 27, Wilson-Raybould made stunning and detailed accusations about PMO conduct in testimony before the House of Commons justice committee.

Despite resigning from cabinet, Wilson-Raybould confirmed as recently as March 15 that she intended to run for re-election this fall as a Liberal—now an impossibility. (In January, Trudeau named David Lametti as the new justice minister, and he named Lawrence MacAulay as the new minister veteran affairs last month.)

On Tuesday night, the prime minister also announced he was ejecting Jane Philpott from the party. Philpott had been the Treasury Board president until she too resigned from cabinet in the wake of the SNC-Lavalin scandal, saying she’s lost confidence in the way the Trudeau government has dealt with it, though she has maintained she supports the prime minister on all other matters.

“The decisions that I have made, I have made on the basis of what I believe is best for Canadians to stand up for the truth and to stand up for the independence of the justice system,” she told media. She later told the CBC that she was “stunned” by the move and said Trudeau could have nipped the controversy in the bud if he only acknowledged and apologized for putting pressure on Wilson-Raybould. “There is a potential that this could backfire, in a way that may not make Liberals happy,” she also warned.

Why did the prime minister expel them?

Trudeau painted the move Tuesday night as a matter of team loyalty and as a necessity to end Liberal political infighting and turn the focus back to Canadians, saying that Wilson-Raybould and Philpott “can no longer remain part of our Liberal team.”

“The trust that previously existed between these two individuals and our team has been broken, whether it’s taping conversations without consent, or repeatedly expressing a lack of confidence in our government or me personally as leader,” Trudeau said.

His speech won a standing ovation from the Liberal caucus, and MPs have been making the rounds in media to support the move. The Liberals are especially angry about a recording Wilson-Raybould secretly made of a conversation with the Clerk of the Privy Council Michael Wernick, the country’s top bureaucrat and a non-partisan aid to the prime minister and cabinet. The recording caused outrage among Liberals and those who saw it as an ethical breach, and Trudeau called it “unconscionable.” (Wilson-Raybould has expressed dismay at the focus on the making of the recording, “as opposed to the contents of the tape.”)

Unidentified sources told both the Toronto Star and CBC News that Wilson-Raybould set several conditions for her to remain in cabinet, including the firings of both Trudeau’s principal secretary Gerald Butts and Wernick. Reportedly, Wilson-Raybould also wanted a commitment Lametti would not step in to negotiate a remediation agreement with SNC-Lavalin. Wilson-Raybould hasn’t responded to a request for comment on the claims.

On April 9, Philpott asked the Speaker of the House of Commons to rule on whether Trudeau violated the rights of MPs when he expelled her and Wilson-Raybould from the Liberal caucus—a move she calls a breach of federal law.

What exactly are the allegations against Trudeau and the PMO?

Wilson-Raybould says she was “hounded” in “a consistent and sustained effort” by the PMO to help SNC-Lavalin secure a deferred prosecution agreement—essentially, a way for companies to pay their way out of criminal trials. Without the so-called DPA, SNC-Lavalin faces the potential of a lengthy and damaging trial. This type of agreement only became law this fall, causing some to question whether the Liberals tailor-made this law for SNC-Lavalin. The company’s employees have made illegal campaign donations to the party in the past and had lobbied Trudeau’s government to try and enter into a DPA and avoid a trial.

On Feb. 27, Wilson-Raybould told the House of Commons justice committee that she believed Trudeau shuffled her out the prestigious justice portfolio in mid-January because she refused to give in to pressure—and even “veiled threats”—to order a halt to a criminal prosecution of SNC-Lavalin. She has provided detailed accountings of meetings and other evidence, including the recording and transcript of one call with Wernick in which he says the Prime Minister “wants to know why the DPA route which Parliament provided for isn’t being used.” In the call, Wilson-Raybould says the conversation (and others, including with Trudeau) “is entirely inappropriate and it is political interference.”

So is there going to be an investigation?

The Prime Minister and the PMO face an investigation from the ethics commissioner Mario Dion to determine whether the government ran afoul of the Conflict of Interest Act. Dion unexpectedly announced a leave from his job due to health reasons on March 12, but his office has said its work will continue (Dion said in April that he hopes to return to work “later this spring”).

The House of Commons justice committee also held a series of hearings over the affair, including hearing testimony from Butts, Trudeau’s former principal secretary and long-time friend who said Wilson-Raybould never complained about improper pressure to halt the criminal prosecution of SNC-Lavalin until Trudeau decided to move her out of her cabinet role as justice minister and attorney general. He said he believes nobody from the Prime Minister’s Office did anything wrong. Butts said he and others in the Prime Minister’s Office only wanted Wilson-Raybould to seek independent legal advice on the matter, given the potential impact on the company’s 9,000 employees and the fact that remediation agreements are a new feature in Canadian law. On March 13, the Liberal MPs used their majority on that committee to shut down an opposition attempt to call Wilson-Raybould to testify again.

What are the opposition parties saying?

Both the Conservatives and the NDP have continued to slam the government over the controversy since February. Andrew Scheer, leader of the Conservatives, called the expulsions “a betrayal of justice” and later asked, “Why does telling the truth get you kicked out of the Liberal Party?” The Conservatives are continuing to push the House of Commons justice committee to reopen its investigation.

On April 7, Scheer challenged Trudeau to follow through on a threat to sue him over his assertion that the PM politically interfered with the criminal prosecution. The Conservative leader said he got a letter on March 31 from Trudeau’s lawyer, Julian Porter, threatening a libel suit. “I stand by every single criticism I have made of Mr. Trudeau’s conduct in regards to this scandal, including those Mr. Trudeau’s lawyer cites in his letter,” Scheer told a news conference. “If Mr. Trudeau intends to pursue this course of legal action, if he believes he has a case against me, I urge him to do so immediately.”

Why do I welcome Justin Trudeau’s lawsuit? 1) Because he will finally be forced to testify under oath. 2) He will not be able to shut down the proceedings like he has in Parliament. Canadians will finally get the answers they deserve.

NDP Leader Jagmeet Singh tweeted that the Liberals “showed us exactly what they think about integrity” and asked what message the Prime Minister was sending to Canadians, “particularly to young women, when he kicks out former cabinet members just for doing the right thing?”

Where does the scandal leave the Liberal Party?

That remains unclear. The party has clearly been battered by the expulsions and the resignations of two senior staff: Butts, who said in a statement he unequivocally denied the accusation that he or anyone else in the office improperly pressured Wilson-Raybould; and Wernick, who told Trudeau that recent events have made it clear it would be impossible for him to maintain a “relationship of mutual trust” with the opposition parties.

Overall, the government has managed to make the scandal as much about Wilson-Raybould as it is about her accusations. iPolitics reports that Trudeau is unlikely to field backlash within the party, and Sarmishta Subramanian argues in Maclean’s that small-l liberal Canadians will be glad to see the back of the controversy, regardless of the principles at stake, if only to ensure that the Liberals gain another majority government in the fall election. But there are signs that expelling two popular and high-profile women won’t go without consequence. A Globe and Mail editorial warns that “each time the government tries to obfuscate the real issue [of interference in the SNC-Lavalin case], it not only undermines its own credibility, it waters down principles established long before the Trudeau government came to power”—and Trudeau has already been subjected to a wave of disapproval from young women at the Daughters of the Vote event in the House of Commons.

What about the future of SNC-Lavalin?

From the outset, SNC-Lavalin’s fate has been in the hands of the public prosecutions office, which wrote a secret memo in September that the case should go to trial (a decision Wilson-Raybould decided not to overrule, which triggered the entire scandal). The memo itself, known as a Section 13 notice, remains secret, prompting some to argue the whole messy affair could be calmed if the government would simply release it.

A preliminary hearing in the SNC-Lavalin bribery case—which is being conducted under a publication ban—finished Monday, and a judge will now decide whether the case heads to a trial.

In 2015, the RCMP charged the company—a major employer in Quebec—with corruption for allegedly paying various Libyan government officials nearly $48 million in bribes, and defrauding other Libyan entities to the tune of nearly $130 million, all between August 2001 and September 2011 (former employees were also charged in the investigation).

SNC-Lavalin has been arguing (and heavily lobbying) that it’s far too big an employer and too important to the Quebec economy to endure a trial and the potential financial fallout. When the government announced in October 2018 the case would go to court, SNC-Lavalin shares fell to their lowest since 2016. SNC-Lavalin also faces the possibility of being banned from federal contracts—a key portion of its work—for a decade if the company is convicted.