What The Budget Means For Canadian Women 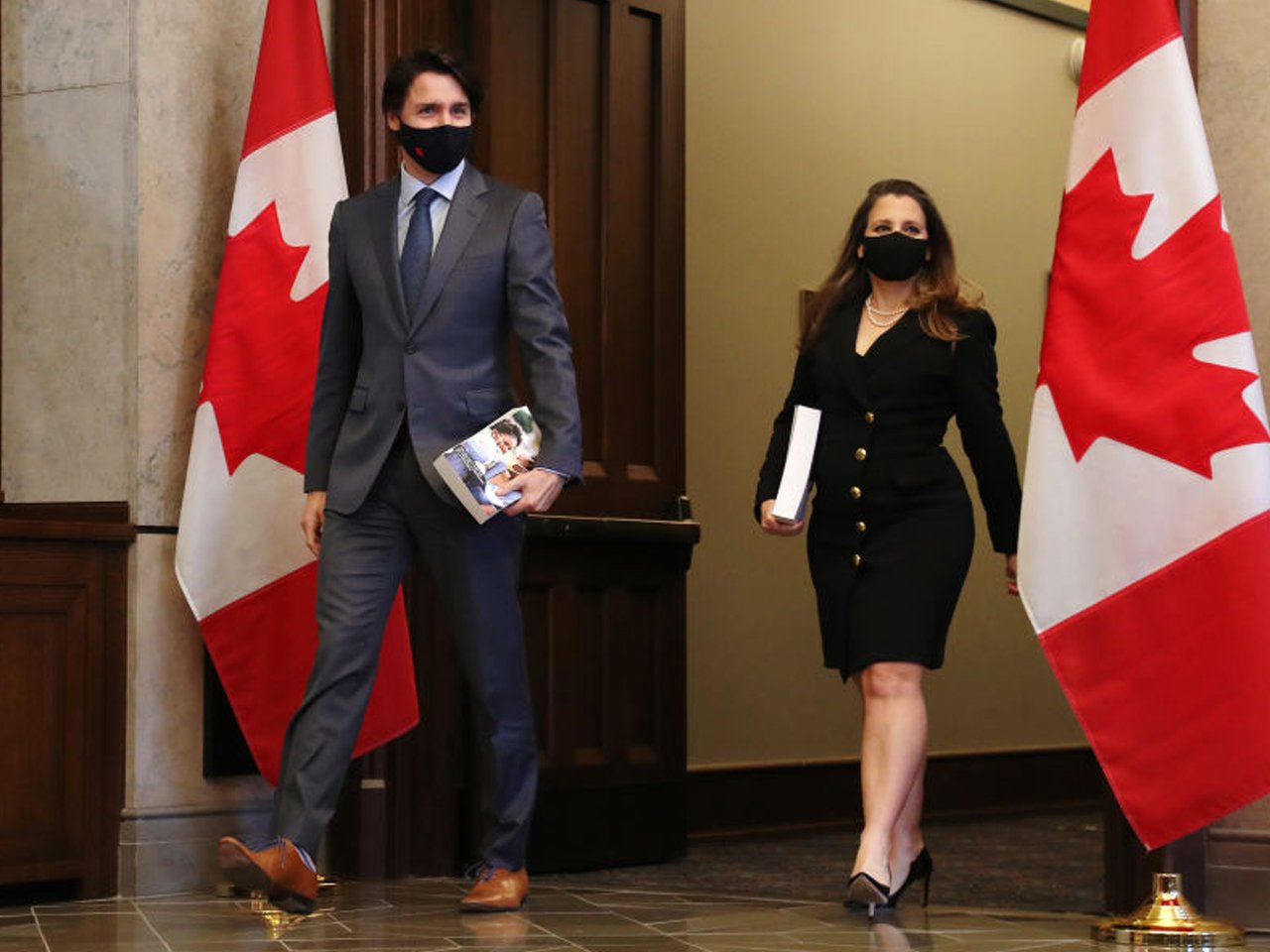 The federal government is finally taking steps to fund a national early learning and child care program—the marquee policy item that emerged from Monday’s federal budget, a document that tips the scale at 724 pages. All it took was 50 years of politics and witnessing the devastating economic and social impacts of a global pandemic to see the idea come to fruition. Deputy Prime Minister and Finance Minister Chrystia Freeland’s inaugural budget is the first the country has seen since 2019 after last year’s budget was cancelled due to the pandemic. Doubling as a policy platform, it’s also a document the Liberals hope will keep them afloat through election speculation chatter. Pandemic recovery is the budget’s throughline. Here’s what you need to know about the budget and what it means for women.

The budget calls child care “essential social infrastructure.” Looking to Quebec’s provincial system for inspiration, what’s new is the funding committed to see the idea through. Ultimately, the long-term goal, according to the budget, is to regulate and reduce early learning and child care fees across the country to $10 per day on average, similar to what Quebecers pay, within the next five years. The budget proposes up to $30 billion over the next five years, and $8.3 billion in annual costs, to create a “high-quality, affordable and accessible early learning and child-care system across Canada.” Advocacy behind the generation-old idea gained new urgency in the past year after the pandemic crumbled decades of economic gains made by women. “COVID has brutally exposed something women have long known: Without childcare, parents—usually mothers—can’t work,” writes Freeland in the budget’s foreward.

It’s a legacy piece the Liberal government hopes will make a difference for parents’ pocketbooks and in the country’s overall economic outcomes coming out of the pandemic. To make that happen, Ottawa pledges to work with provincial and territorial governments to “make meaningful progress” in finding a system that works. Starting this year, Ottawa proposes to move toward a cost-sharing model that splits child care 50/50 with the provincial and territorial governments. The government says regulated early learning and child care fees will be cut in half by the end of 2022. A new federal secretariat on early learning and child care will also be created to handle consultations and compile expert advice to aid the creation of this new national child care system.

The suite of emergency benefits unleashed last year at the onset of the pandemic proved to be lifelines for people who suddenly lost their jobs or had their pay and hours slashed because of widespread physical-distancing measures. With more contagious variants of COVID-19 driving more hospitalization and intensive care unit admissions this spring, the federal government proposes to spend a combined $12.1 billion to extend the Canada Emergency Wage Subsidy and Canada Emergency Rent Subsidy and Lockdown Support, before starting to wind it down as of July 4, and phase it out by September 25.

“We have to finish the fight against COVID, and that costs a lot of money,” Freeland told reporters Monday. “Extending these income and business support programs is absolutely essential. And it is expensive.”

On the recovery theme, the federal government also proposes a new initiative, called the Canada Recovery Hiring Program, to help cushion increased payroll costs in hopes to spur hiring sprees for businesses experiencing “qualifying” declines in revenue compared to before the pandemic. If the budget passes a confidence vote, the program will be available between June 6 to November 20. No details were given for what constitutes as a “qualifying” decline.

TLC for the EI system

The Canada Emergency Recovery Benefit (CERB) was launched quickly last year to help keep the employment insurance (EI) system from being overwhelmed by a flood of new applicants. Since CERB wrapped in the fall, its remaining recipients transferred to the EI system. More than 3.3 million candidates have since claimed EI benefits. The need to deploy an entirely new benefit to keep the existing EI system afloat underscores the urgency of improving the current EI system and increasing its capacity to process a sudden burst of millions of applicants applying for help in the wake of an emergency.

In its budget, the government proposes $3.9 billion over the next three years to make the EI process simpler and more accessible. Long-term reforms are also in the government’s purview, and $5 million has been earmarked for consultations to “examine systemic gaps exposed by COVID-19” and to review how the system can help self-employed, gig and seasonal workers.

Putting “she-cession” barriers behind “for good”

There were three mentions of “she-cession” in the federal budget, a term coined to describe the phenomena of women being disproportionately impacted by the COVID-19 recession than men. “The closure of schools and child care centres has exacerbated work-life balance challenges for women as they have overwhelmingly borne the burdens of unpaid care work,” the budget reads. “This has made it more difficult for some women to work full time, for some to work at all, and for many women it has worsened their mental health.” Government data suggests 16,000 women have left the labour force in the past year while men’s participation has climbed 91,000 during the course of the pandemic.

The federal government says there’s no single approach to mitigate the “she-cession” because it’s an intersecting issue that also draws on “racial identity, income level, disabilities, geography.” The budget drew renewed attention to its new task force, announced last month, and specified the expert panel will continue to advise Freeland and Mona Fortier, Middle-Class Prosperity Minister and Associate Minister of Finance, on ways to improve women’s participation in the economy. Though the pandemic has exacerbated pre-existing inequities faced by women, such as shouldering the bulk of unpaid care work and child care, lasting fixes aren’t expected to all arrive in one budget cycle. It will take some time to build an “inclusive, sustainable, feminist, and resilient economy that values women’s work,” the document reads.

Women, young people, low wage workers and small businesses have been identified by the government as groups most vulnerable to the worst impact of the pandemic and lockdowns. Small and medium-sized businesses make up 99 percent of the Canadian economy and they’ve sustained significant financial impacts over the past year. To specifically support female entrepreneurs, the budget proposes an $146.9-million investment into the Women Entrepreneurship Strategy, and two other relative initiatives, to improve access to financing, mentorship and training.

Plans for a National Action Plan to End Gender-Based Violence announced earlier this year will get a proposed $601.3-million boost over five years. The money has been earmarked to support the work of sexual assault centres, women’s shelters and other organizations that offer life-saving services to women, girls, LGBTQ+ and gender non-binary people. “Those at highest risk of violence are those living in rural and remote areas, Indigenous women, Black women, women with disabilities, women of colour, gender non-binary and LGBTQ2 people,” the budget reads, noting the pandemic has also seen a pernicious rise in domestic violence.

A promise to improve the quality of long-term care

Canada “tragically failed” many residents living in long-term care facilities, Freeland writes in her foreward to the budget. “To them, and to their families, let me say this: I am so sorry. We owe you so much better than this. As a country, we must fix what is so clearly and utterly broken.” After COVID-19 ripped through the country’s long-term care facilities, it was obvious that pre-existing systemic issues exacerbated tragic outcomes experienced by residents, workers and their families. To fix what’s broken, the budget proposes making a $3-billion investment over five years, starting next year, to ensure the provinces and territories meet national standards of care—a request countless advocates, including the Canadian Association for Long-Term Care, have long asked for.

Advancing a pledge made in the Fall Economic Statement to provide more financial security to personal support workers and elder care sector employees, the federal government proposes setting aside $27.6 million in funding to a group tax-free savings account called “my65+,” a program offered by the Service Employees International Union Healthcare to enhance retirement benefits for its members. Additional notable funding includes $90 million over three years for Employment and Social Development Canada to launch an initiative called “Age Well at Home.” Its objective, according to the budget, is to “assist community-based organizations in providing practical support that helps low-income and otherwise vulnerable seniors age in place, such as matching seniors with volunteers who can help with meal preparation, home maintenance, daily errands, yard work and transportation.”

When the final report of the National Inquiry into Missing and Murdered Indigenous Women and Girls (MMIWG) was presented to the prime minister in 2019, it detailed 231 individual calls to action for all levels of government. Advancing last year’s announcement that work is underway to develop a MMIWG national action plan, the federal budget has allocated $2.2 billion to fund this work over five years.

The death of Joyce Echaquan was referenced in the budget as a case study that shows the “devastating consequences of anti-Indigenous racism in our health care systems.” The Atikamekw mother of seven livestreamed herself laying on a Quebec hospital bed, the microphone picking up the voices of health care workers uttering racial slurs shortly before her death. It was a shocking display of racism and discrimination against Indigenous people in the health-care system. In response, the federal government proposes spending $126.7 million over three years to “support patient advocates, health system navigators, and cultural safety training for medical professionals.”