Fall Forecast 2019: What Environment Canada Says To Watch For

This fall will be much milder than usual all across Canada. 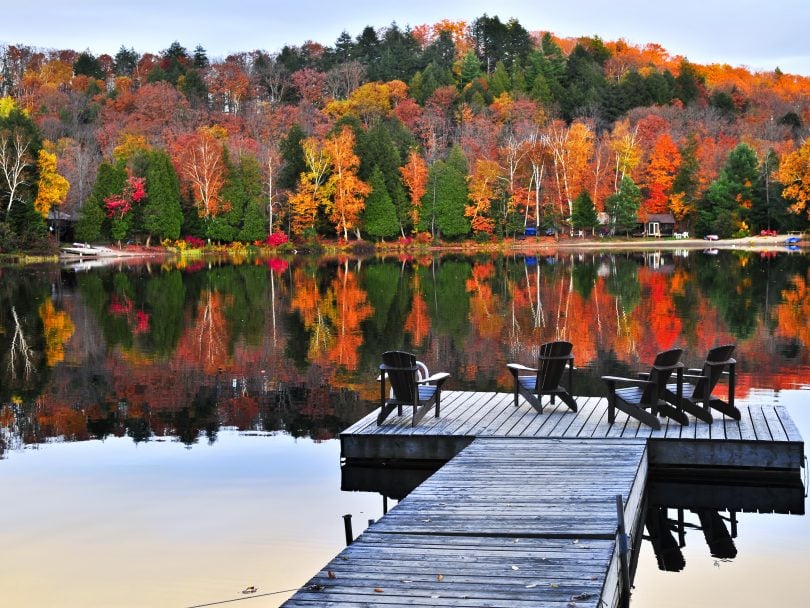 The days are getting shorter and summer is nearing its end. So, what’s in store for Canadians this fall?

It’s difficult for meteorologists to say precisely what the weather will be like for the whole season, but David Phillips, Environment and Climate Change Canada’s senior climatologist, gave us a provisional look at the weather nationwide from September through November. To make long-term predictions, Environment Canada uses water temperatures to predict on-land weather trends. Phillips notes that water temperatures in the Pacific and Atlantic, as well as Hudson Bay and the Great Lakes, are warmer than normal for this time of year, meaning that Canadians nationwide can expect a warmer-than-normal fall. (But, according to Phillips, just because we’re in for “a glorious fall, it doesn’t mean anything for winter.” Fingers crossed that winter isn’t as bad as what the Farmer’s Almanac is predicting.)

Another nationwide trend Phillips points to for this fall is the great foliage. “The trees have loved the summer, they got lots of water in the spring, they got some heat in July, so they were growing,” says Phillips. “My sense is that the health condition of the trees is very good, so they will have a Technicolor look to them.”

And, while this is a fall weather forecast, it’s important to check local weather conditions day to day when planning activities. (We swear by Environment Canada’s WeatherCAN app for iOS and Android for daily weather conditions.)

Here is what Environment Canada is forecasting this fall, region to region.

The best thing about Atlantic Canada’s fall weather, according to Phillips, is that winter always arrives later in the East Coast. September is often warmer than June because the ocean is so warm after summer, and any cool air masses that come in are warmed by the water. As well, the overall warmer-than-average water might mean that warmer temperatures will persist, and those on the East coast will experience an extended fall. This year, because of how hot the Atlantic is, locals will notice that the weather is significantly warmer now and into the fall.

“I think the most gorgeous falls in Canada is in the Atlantic,” says Phillips. “They have brilliant colours there, the great harvest is on—people are in good moods, everything’s coming in, the silos are full. As they say in Newfoundland, ‘it’s a good time to be alive.’”

Phillips notes that Environment Canada’s models are showing a little more uncertainty in their prediction in Quebec. For now, Phillips thinks that Quebec will, unlike most of the country, experience a normal fall . However, Phillips points out that the areas surrounding Quebec are quite warm, so it might still catch up to the rest of the country in terms of temperatures.

Like Ontario and Atlantic Canada, Quebec will have an exceptionally colourful fall. And because of the warmer weather, the colours are due to last longer. “Although, [the leaves] can be knocked off by a major storm that we can’t even see yet, it’s not even born yet,” reminds Phillips. “But the vividness, the vibrancy of the colours—it’ll be as if the trees are in competition with each other to give us a brilliant feel to the fall. I think it’ll be spectacular.”

Like the rest of the country, Ontario is projected to be warmer than usual this fall.

The biggest poor-weather risk in Ontario (and Eastern Canada in general) is hurricane season. This year in particular, Environment Canada predicts that we will be seeing a more active hurricane season to our south because of the warm waters and steady winds in the Caribbean. Fortunately, hurricanes don’t usually come up to Ontario (Canada as a whole averages about one hurricane or hurricane-strength post-tropical storm every three years). But Ontarians might get some heavy rainfall and strong winds from the remnants of dying hurricanes. In other words, make sure your fall rain gear is ready.

In September, the Prairies may see a little bit of frost. Fortunately, this frost won’t be a killing frost: “Farmers are worried about frost, things have been delayed pretty much everywhere and we don’t want a killing frost—that pretty much ends the growing season.”

Despite record cold temperatures in Regina and Saskatoon, wintry weather “are just little blips,” says Phillips. While it’s rare to see an October without snow in the Prairies, this snow usually doesn’t last. “The snow they see in October won’t be the same snow that’s there on Easter. That would come probably in late November.”

Luckily, B.C. hasn’t experienced any “forest fires of note” this year, unlike in most recent history—this is mostly because of a wet summer. This wet weather is likely to continue into the fall. In October, B.C.’s wet season begins and storms from the Pacific have a huge effect on the West coast. “All that warm water that goes from Alaska and down to California is going to make any systems that come in warm systems,” says Phillips. “There’s going to be days where there’s warm rain and there will also be days where there’s warm air. So, we think the Pacific coast will have a more summer-like fall, in terms of temperature.”

Up in the North, fall is all about getting ready for winter. But this fall, Phillips thinks that the North “will have good procrastinating weather,” says Phillips. “We won’t do those things that sometimes winter tells us to do—putting on winter tires, putting away the lawn furniture, all that […] It’ll feel too unseasonably warm for [that].” Environment Canada is calling for a warmer-than-normal fall in the entire Arctic region. And though this kind of “warmth” would, as Phillips says, “scare the bejeebies out of those of us in the South [who are used to warmer weather],” those up North will experience a relatively balmy and late start to fall.

This past summer has been very hot for the Arctic. The North has experienced heat waves, very warm water and large amounts of ice melting. This heat is forecast to continue into the fall: “What will happen is the ice won’t freeze up as quickly as it has,” says Phillips. As well, the Arctic region might experience some rain as opposed to snow. Winter will still come, assures Phillips, but it’ll be delayed, and the delay of ice and snow is problematic for those in the North who rely on ice roads to move between isolated communities and hunting.