Everything You Need To Know About Trump And The Impeachment Inquiry

What it all means—and what happens next. 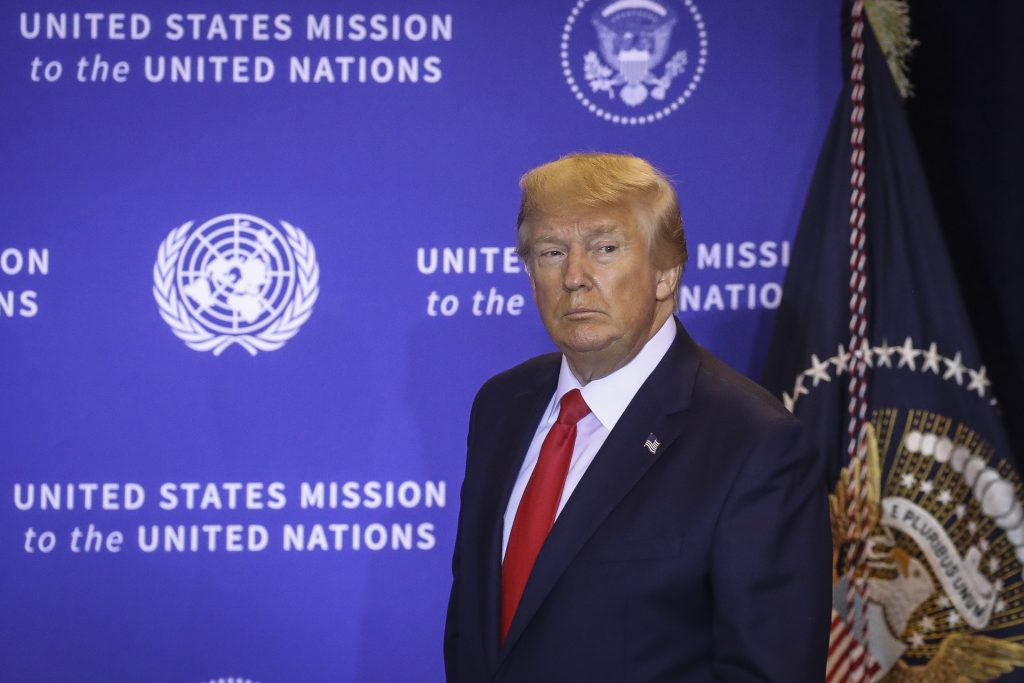 Perhaps you didn’t think things in Washington could get more dramatic. You were wrong. On Tuesday, Democrats in D.C. began a formal impeachment investigation into President Donald Trump—only the fourth impeachment inquiry in U.S. history. It has to do with Ukraine and Joe Biden and, of course, the president’s conduct. Here’s what it all means.

How did this happen?

The short answer is the U.S. is reeling over the news that in July, Donald Trump asked the president of Ukraine to investigate former vice president—and current frontrunner in the 2020 Democratic presidential primary— Joe Biden, as well as look into some of the origins of the investigation into allegations of Russian interference in the 2016 U.S. election and connections to the Trump campaign. Announcing the decision to begin the impeachment inquiry, House Majority Leader Nancy Pelosi said the call revealed Trump’s “betrayal of his oath of office, betrayal of our national security and betrayal of the integrity of our elections” by asking a foreign nation to investigate a political rival.

Quick reminder: Trump’s campaign was under investigation for its ties to the Russian government, in what became the Mueller probe—a damning report of the president’s conduct that ended with 34 people and three companies either pleading guilty or being indicted for criminal conduct, including six former Trump advisors, but without charges against the president. (You may recall hearing Trump’s “No collusion!” refrain. Mueller noted in his report that he could not find the president guilty of anything, no matter Trump’s actions, since it’s Department of Justice policy that a sitting president cannot be charged with a crime.)

Okay. Back to Ukraine. Earlier this month, Democrats revealed that a whistleblower in the U.S. intelligence community had made a mysterious formal complaint, and the president’s acting director of national intelligence was refusing to share that complaint with Congress. A few weeks later, and the story has imploded. On Wednesday, the White House released an account of the call between Trump and Ukrainian President Volodymyr Zelensky—the subject of the whistleblower’s complaint. In it, Trump asks Zelensky for “a favour” in looking into Mueller’s investigation and allegations that Joe Biden or his son, Hunter Biden, may have engaged in corruption in Ukraine—unproven claims of which the White House has offered no proof—and offered Zelensky the help of Attorney General William Barr and Trump’s personal lawyer Rudy Giuliani. A week before the call, Trump told his acting chief of staff, Mick Mulvaney, to hold back $400 million in military aid to Ukraine—a move that raised questions of an implicit quid pro quo, which the White House has denied.

House Intelligence Committee Chair and leading Democratic Representative Adam Schiff called the conversation a “classic mob shakedown,” and now says the original whistleblower wants to testify before his committee as part of the impeachment inquiry, but did not suggest whether the testimony would be open to the public.

The transcript of the call reads like a classic mob shakedown:

Nice country you got there.

It would be a shame if something happened to her.

The acting director of national intelligence, Joseph Maguire, testified before Congress on Thursday—the same day the original whistleblower complaint was finally revealed. (A complaint that says “senior White House officials had intervened to ‘lock down’ all records of the phone call, especially the official word-for-word transcript of the call that was produced as is customary by the White House Situation Room.”)

What exactly is impeachment?

Impeachment is the process by which the U.S. Constitution allows Congress to remove a sitting president. It’s warranted when he or she has committed “treason, bribery, or other high crimes and misdemeanors.” It’s only been attempted three times in the past, and there isn’t a clear, definitive set of guidelines for the nuances of the process.

Very broadly, impeachment proceedings begin in the House of Representatives, where six committees are already currently investigating the president’s conduct (among other jurisdictions), but will now do so under the banner of an official impeachment inquiry. Those investigations include the Ukraine call, but also Trump’s personal finances and the finances of the Trump Organization, hush-money payments to the adult actor Stormy Daniels, whether Trump obstructed justice during the Mueller probe, the use of private email in the White House, and other issues. The results of those investigations could then result in the drafting of articles of impeachment against the president—essentially, a list of the president’s alleged crimes.

There would then be a vote on the House floor on those articles of impeachment. Only two presidents have been impeached in the past: Bill Clinton in 1998, and Andrew Johnson in 1868. In the case of Richard Nixon, an impeachment investigation had begun in the House Judiciary Committee, but Nixon resigned before the House could vote to impeach him in 1974.

According to the Washington Post, support for the impeachment inquiry among Democrats is already high, and depending on what the investigations reveal, there is a good chance they’d have enough votes to impeach Trump.

Those investigations are unlikely to be swift, which means a vote to impeach Trump could be a long while away. If the House impeaches Trump, the issue would then move to the Senate. But what would happen next is far from clear.

The New York Times lays it out: “The Constitution clearly envisions that if the House impeaches a federal official, the next step is for the Senate to hold a trial. But there is no obvious enforcement mechanism if Senator Mitch McConnell, Republican of Kentucky and the majority leader, were to simply refuse to convene one.”

If the Senate did schedule a hearing, the Times added, “the Republican majority in the Senate could vote to immediately dismiss the case without any consideration of the evidence if it wanted.”

Finally, it’s worth noting that the vote to convict requires a two-thirds majority—“a threshold Democrats are unlikely to meet,” notes Vox, since Republicans hold a majority of seats there. Clinton was ultimately acquitted because of this requirement. Ultimately, a president can only be removed from office if she or he is found guilty by the Senate.

What does this mean for the Republicans?

So far, this has played out as most things in Washington under this administration: Along stridently partisan lines.

Republicans have downplayed the announcement, questioned whether the House Majority Leader can simply announce an impeachment inquiry (the House voted to begin an impeachment investigation in the cases of Clinton and Nixon), and begun fundraising off it: Politico reports the news netted the Republican National Committee $1 million in a single day.

Senator Lindsey Graham, one of Trump’s most outspoken supporters, has appeared to call for an investigation into Joe Biden and his family’s dealings in Ukraine. Senator Ted Cruz said Democrats are trying to “undo” the 2016 election.

For his part, President Trump tweeted “PRESIDENTIAL HARASSMENT!” after Pelosi announced the inquiry, and he has since been retweeting conservatives who argue the Ukraine call exonerates him. He called the inquiry a “manufactured crisis” during meetings at the UN, where he also met with the president of Ukraine, who told reporters the call was “normal” and no one “pushed” him. During a later press conference, Trump called the controversy a “hoax.”

What does this mean for Democrats?

Whether to impeach Trump has been a source of infighting among Democrats, and a possibility long held-off by Pelosi. But the Ukraine revelations seem to have finally united much of the party behind this effort. The case for impeachment was boosted by the reaction of moderate Democrats, who wrote a joint op-ed in the Washington Post arguing Trump’s call with Ukraine posed a potential threat to national security.

Many Democrats are coming out even more aggressively against the president in the wake of the release of the details of the call, including some 2020 candidates for president. Others remain worried of a 2020 election blowblack.

What is clear is that we’re headed for months of impeachment-related news and another lengthy, complicated political battle. In other words: many, many more Trump headlines.