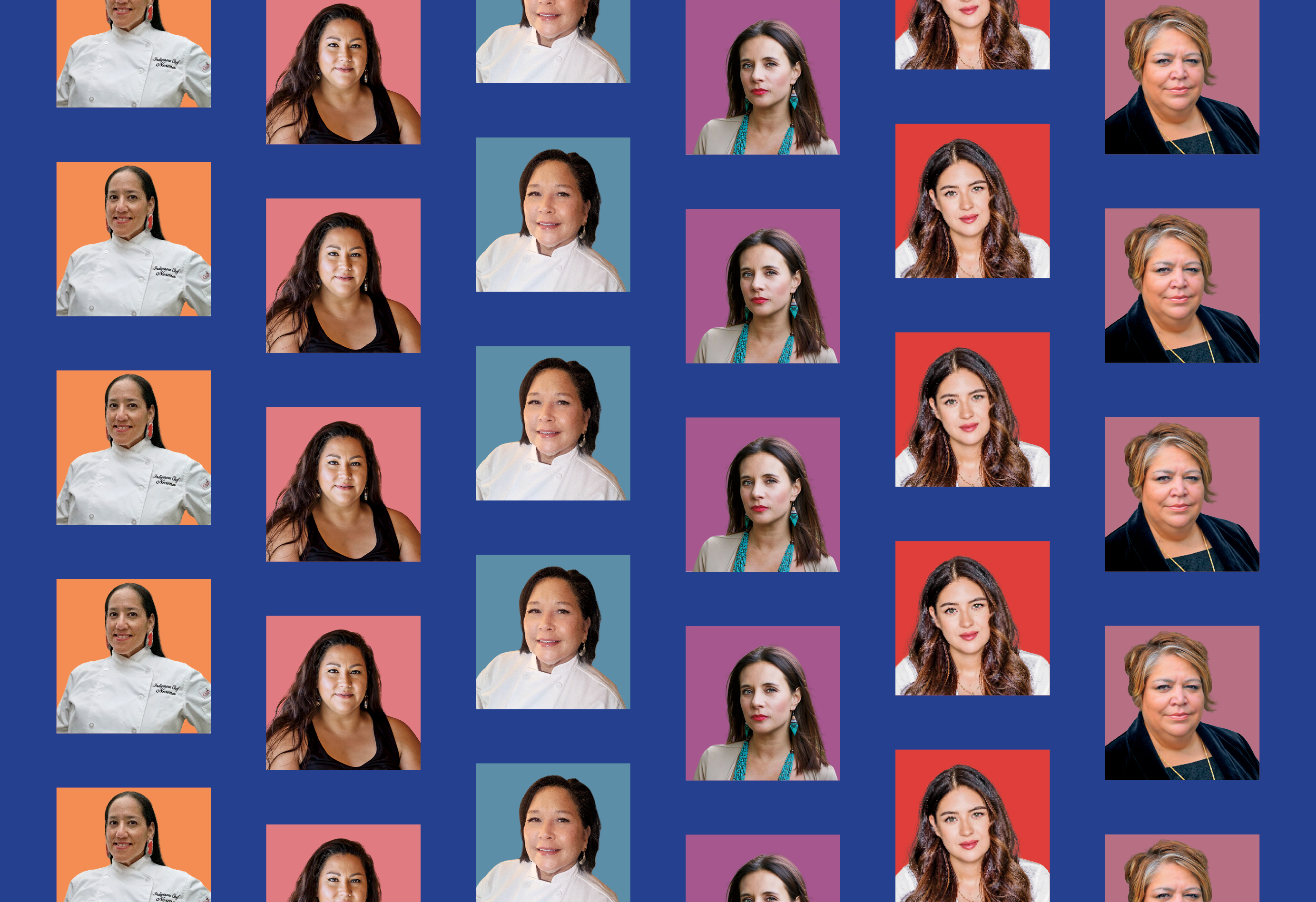 6 Indigenous Cooks Showcase Their Heritage With These Delicious Recipes

From fresh arctic char ceviche to scrumptious sweetgrass cherry cake, the results are tasty dishes you can recreate at home. 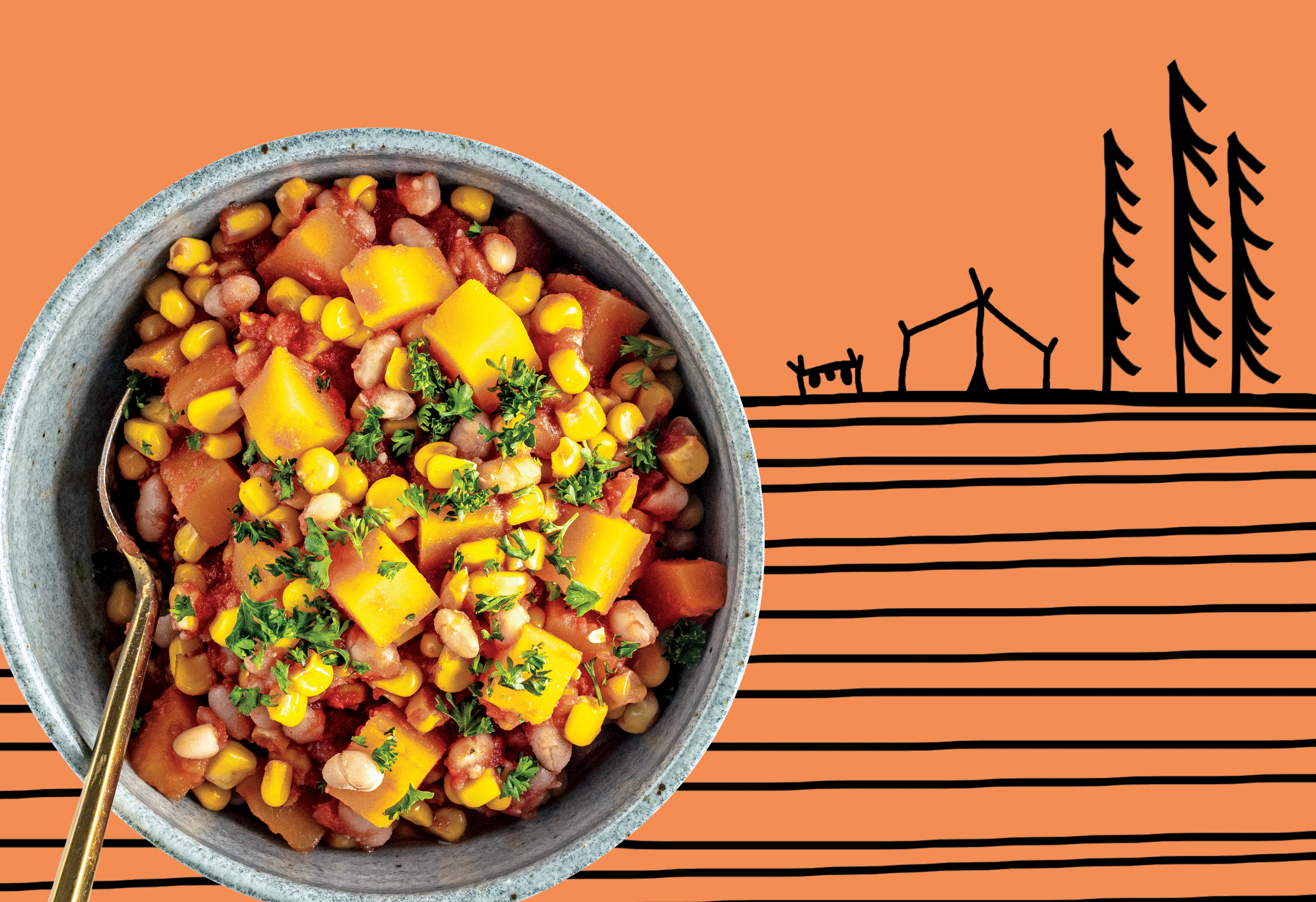 View the recipe by Norma Condo

Norma Condo is the chef behind Miqmak Catering Indigenous Kitchen, the first permanent Indigenous-owned restaurant in Montreal. On the menu are buffalo burgers and pasta with moose-balls, as well as bannock and wild rice.

Condo is from the Mi’kmaw community of Gesgapegiag, which is where she grew up watching her grandmother make traditional meals for her large family on Sundays. Helping out with those meals was the beginning of her journey, she told the online food magazine Eater Montreal in 2019, one that included a stop at culinary school. She has also cooked at the prestigious À la rencontre des grands chefs, an annual culinary event at Quebec City’s Château Frontenac that partners Québécois chefs with ambassadors from each of the province’s Indigenous communities.

Condo focuses on preparing dishes with natural Indigenous ingredients, from salmon to moose meat, often using cedar and sage for flavour. Besides helping to keep Indigenous food traditions alive, her goal is to provide healthy options for Indigenous people, who are often at high risk of diabetes, heart disease and cancer.

Over the past year, like so many chefs, Condo pivoted to takeout and curbside pickup. She has a lot going on, having announced a new project to deliver meal boxes to Indigenous people during the pandemic, and is writing her first cookbook.

This casserole uses squash, corn and beans—a trio known as the “Three Sisters” because they grow together as a unit, with the cornstalks holding up the beans while the squash protects the roots at the base. 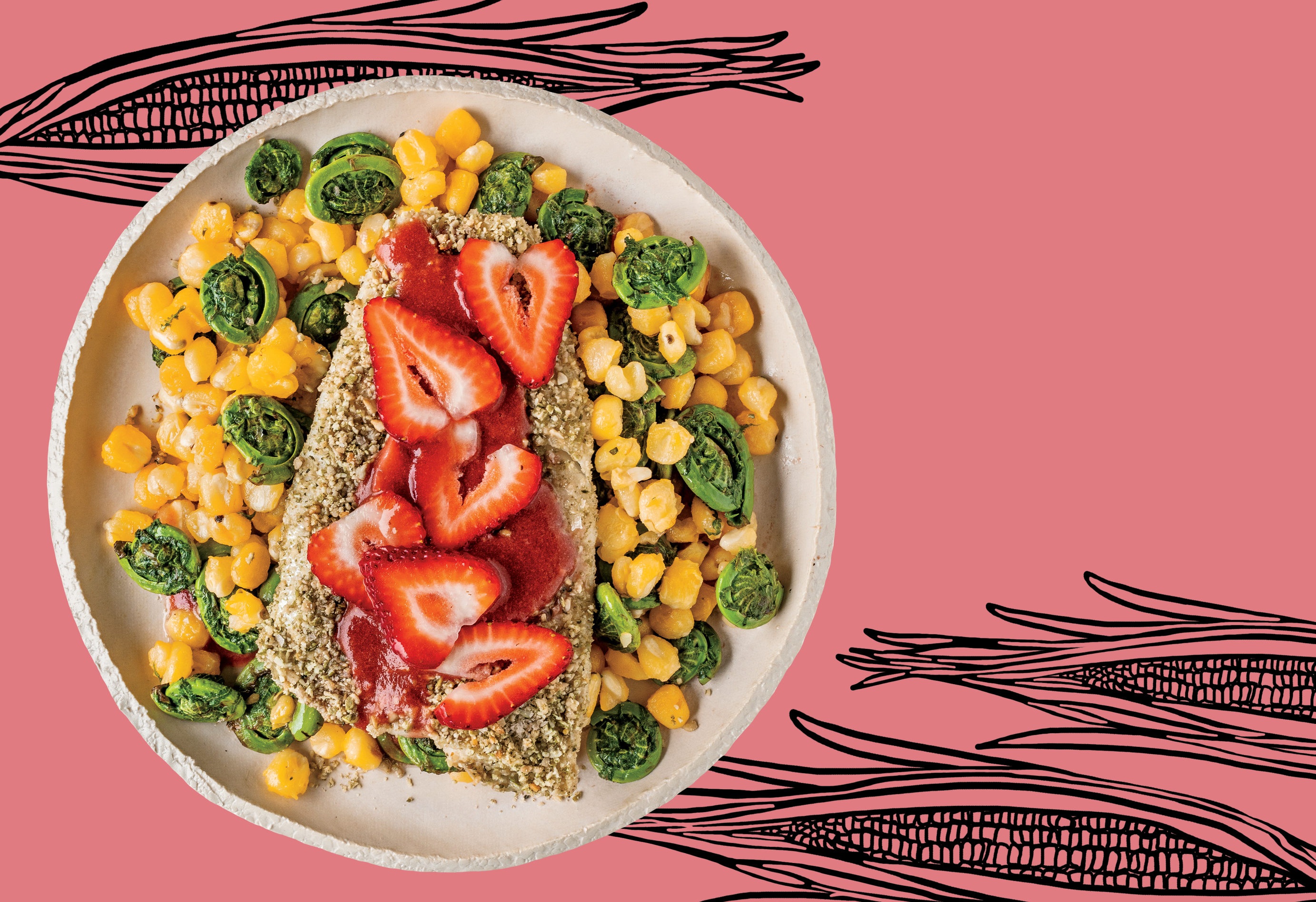 View the recipe by Tawnya Brant

Chef Tawnya Brant is the owner of Yawékon, a takeout restaurant that serves Haudenosaunee fusion cuisine to the large community of Six Nations in southwestern Ontario. Since launching during the pandemic, Brant has focused on incorporating Haudenosaunee ingredients like corn and game into healthy dishes, such as pulled bison tamales or quinoa power bowls loaded with veggies.

Growing up, she learned about traditional foods from her mother, who grew many in her garden. Though Brant has worked in the food-service industry since she was 12, it wasn’t until about seven years ago that it occurred to her that she could make career out of cooking with traditional ingredients. That’s when she encountered the food sovereignty movement, which focuses on ensuring communities have access to healthy and culturally appropriate food that’s been sustainably produced.

“It just opened a whole new world, with a ton of other people out there like me that want to do this work,” says Brant. She believes that incorporating pre-colonial foods into their diets is key to Indigenous peoples’ health. “I’m just happy to see my community embracing their traditional food.”

This dish riffs on one of Brant’s favourite drinks, strawberry and sumac juice, which she thought would make a cool glaze for seafood and appease those who aren’t typically partial to fish. The addition of succotash or hominy is a favourite way to make dishes more filling. 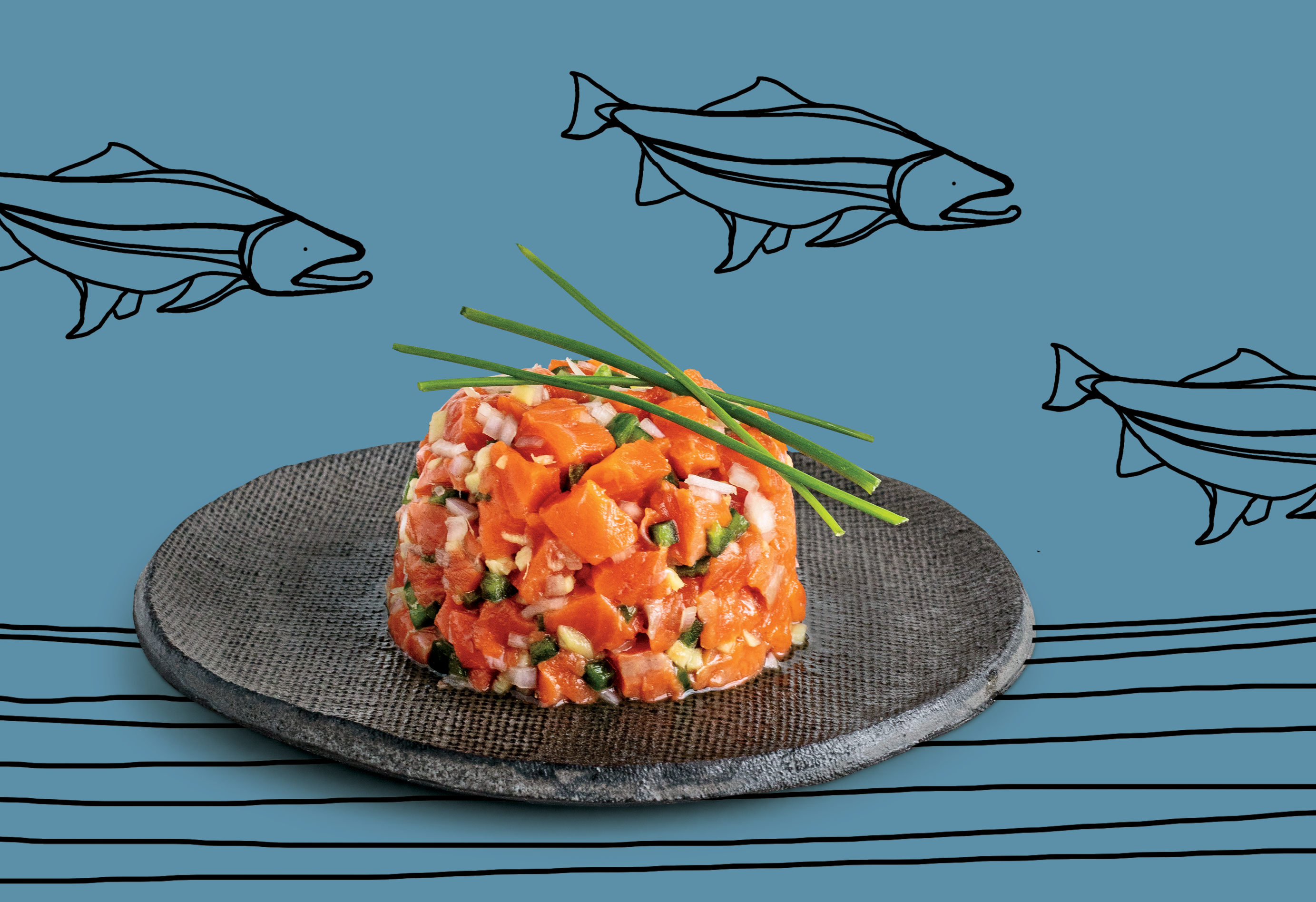 View the recipe by Sheila Flaherty

The cooking bug bit Sheila Flaherty early, largely thanks to her father. He took French culinary classes while she was growing up in Ottawa in the 1970s, and the Inuit chef credits him with her love of cooking, which he passed down to her sister as well.

This recipe for Arctic char ceviche is the same one that Flaherty submitted to season four of MasterChef Canada, which earned her a spot in the top 24 competitors. She opted for ceviche because it presented fish in a way that would appeal to a wider range of palates while also resembling quaq, the traditional Inuit way of eating raw meat that is frozen or partially defrosted.

“I wanted to feature one of our most delicious, unique foods that we harvest ourselves,” says Flaherty. The dish launched her on to notable events, including making hors d’oeuvres for Prince Charles and Duchess Camilla at a feast of country food when they stopped in Iqaluit, Nunavut, during their 2017 Canadian tour.

“I wanted to feature one of our most delicious, unique foods that we harvest ourselves.”

Now, she’s busy preparing to launch her own culinary-tourism business, Sijjakkut, in Iqaluit. The word means “by the seashore” and is also the name of an Inuktitut song that Flaherty loves. She plans to cater out of her home kitchen at first, but eventually she’d like to move into a commercial kitchen. Flaherty envisions creating a space for gatherings, cooking, baking lessons and more, where she also provides community members affordable, restaurant-quality Inuit food. 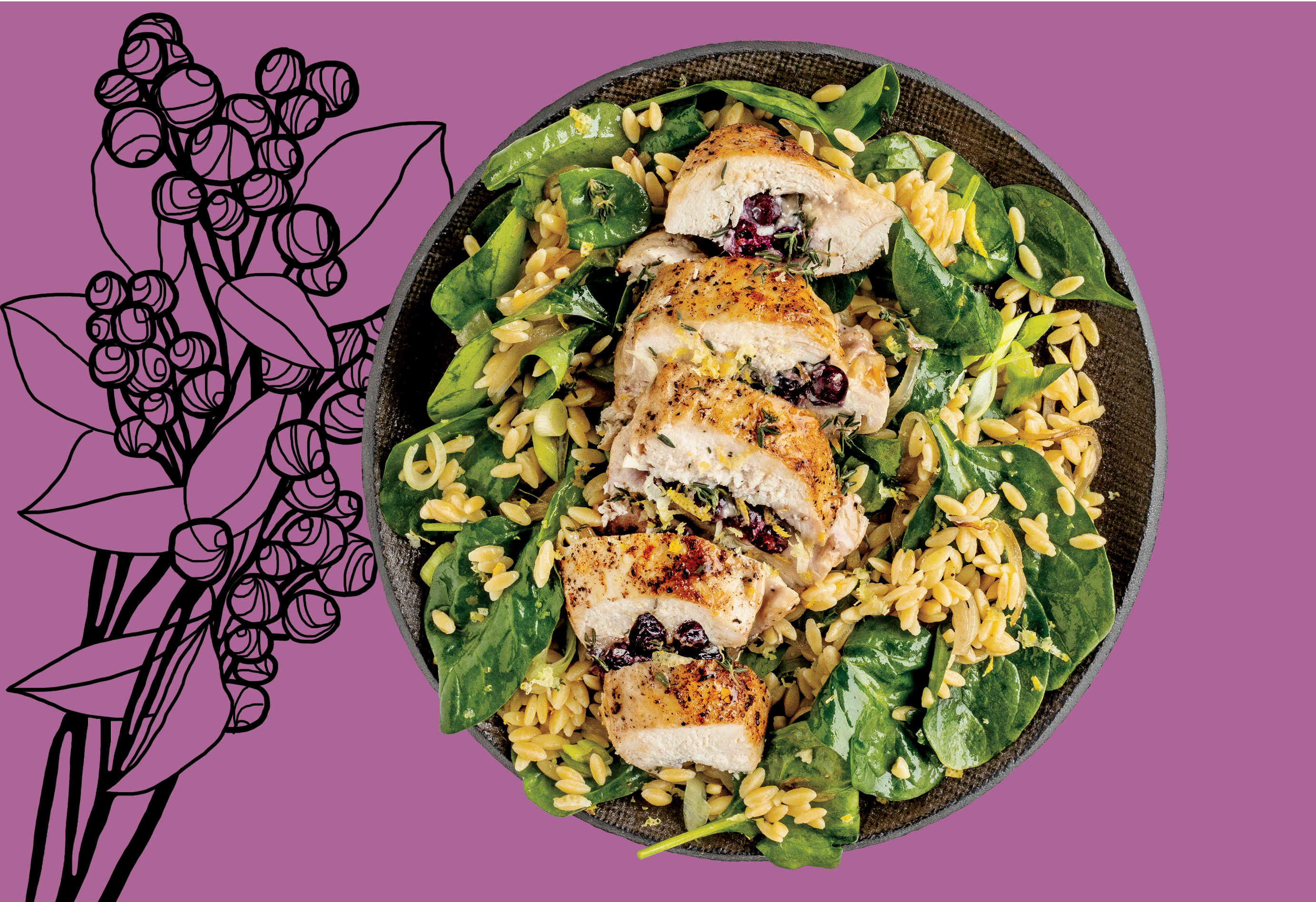 View the recipe by Christa Bruneau-Guenther

Christa Bruneau-Guenther is a home cook turned restaurant owner, of Feast Café Bistro in Winnipeg. She is Saulteaux Cree and French Metis from Peguis First Nation in Manitoba—a background that has informed her approach to food, as she mixes ingredients from various Indigenous traditions and beyond.

“I wanted to feature one of our most delicious, unique foods that we harvest ourselves.”

Her stuffed chicken breast recipe is an “ode to the saskatoon berry,” a traditionally First Nations ingredient, while the brie is a nod to her French heritage. The berry is abundant in the summer, and while it’s used predominantly in baking and desserts, Bruneau-Guenther says it’s underused in savoury dishes.

“Many people don’t know that the saskatoon berry has properties and flavours that are more similar to [those of] an apple than a blueberry,” she says. “In classic chicken dishes, it’s absolutely delicious.”

Her home garden serves as inspiration for many of her recipes, from the spinach that grows abundantly to traditional vegetables, like squash, that have helped the chef reconnect with her Saulteaux Cree side.

“Traditional food knowledge was minimal in our home [growing up], and that had a lot to do with our accessibility and [ability to afford] certain ingredients,” she says. “When I started incorporating some of those ingredients into my garden and into my recipes, I just felt a real connection to our history, to our ancestors and to the land. Food for me, and even for my staff, has become part of the healing journey.” 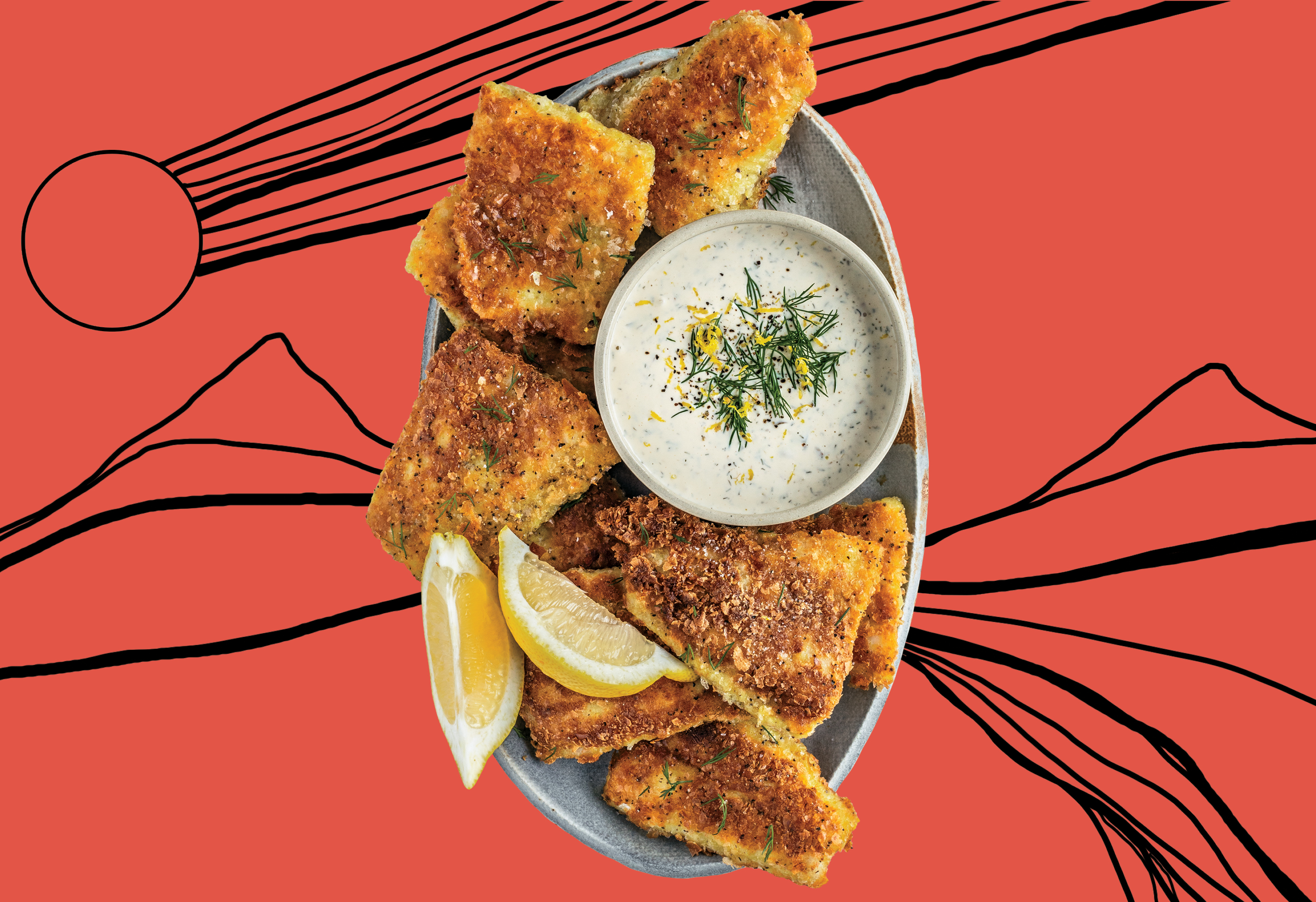 View the recipe by Kirsten Buck

The inspiration for home cook Kirsten Buck’s recipe is childhood memories of her cho-chum (grandpa) making a midnight snack of fried pickerel.

“I still remember how the kitchen smelled when he would panfry fresh pickerel late at night—crackling hot oil and curry powder,” recalls Buck, who lives in Winnipeg. “I would wake up to the sound of the oil sizzling. He would always dust the pickerel with curry powder, season with a generous pinch of salt, dredge it in white flour and fry until crispy. As I peeked around the corner, he would laugh and say ‘nipâw, nôsisim,’ which means ‘sleep, my grandchild.’ ”

“The focus is on what the land has to offer, taking only what you need, being grateful and giving back to the land.”

Buck grew up on Tataskweyak Cree Nation (Split Lake) and in The Pas, in northern Manitoba. She published her first cookbook, Buck Naked Kitchen, last year, but she didn’t start cooking until she lived on her own at 18. Once she got bored with ramen noodles and sandwiches, her mom bought her a cookbook to get her started. Her advice to new cooks is to stock your pantry with items that will allow flexibility, like favourite spices, olive oil, vinegars, stocks, canned goods and baking essentials. She also suggests learning some food lingo, like “julienne,” “dredge,” “reduce” and “al dente.”

Buck is an adventurous eater but generally prefers to eat seasonally, and she prioritizes quality over quantity.

“To me, traditional Indigenous food is natural, seasonal, sustainable, earthy and wild. A system made up of water, land, soil and air,” she says. “The focus is on what the land has to offer, taking only what you need, being grateful and giving back to the land.” 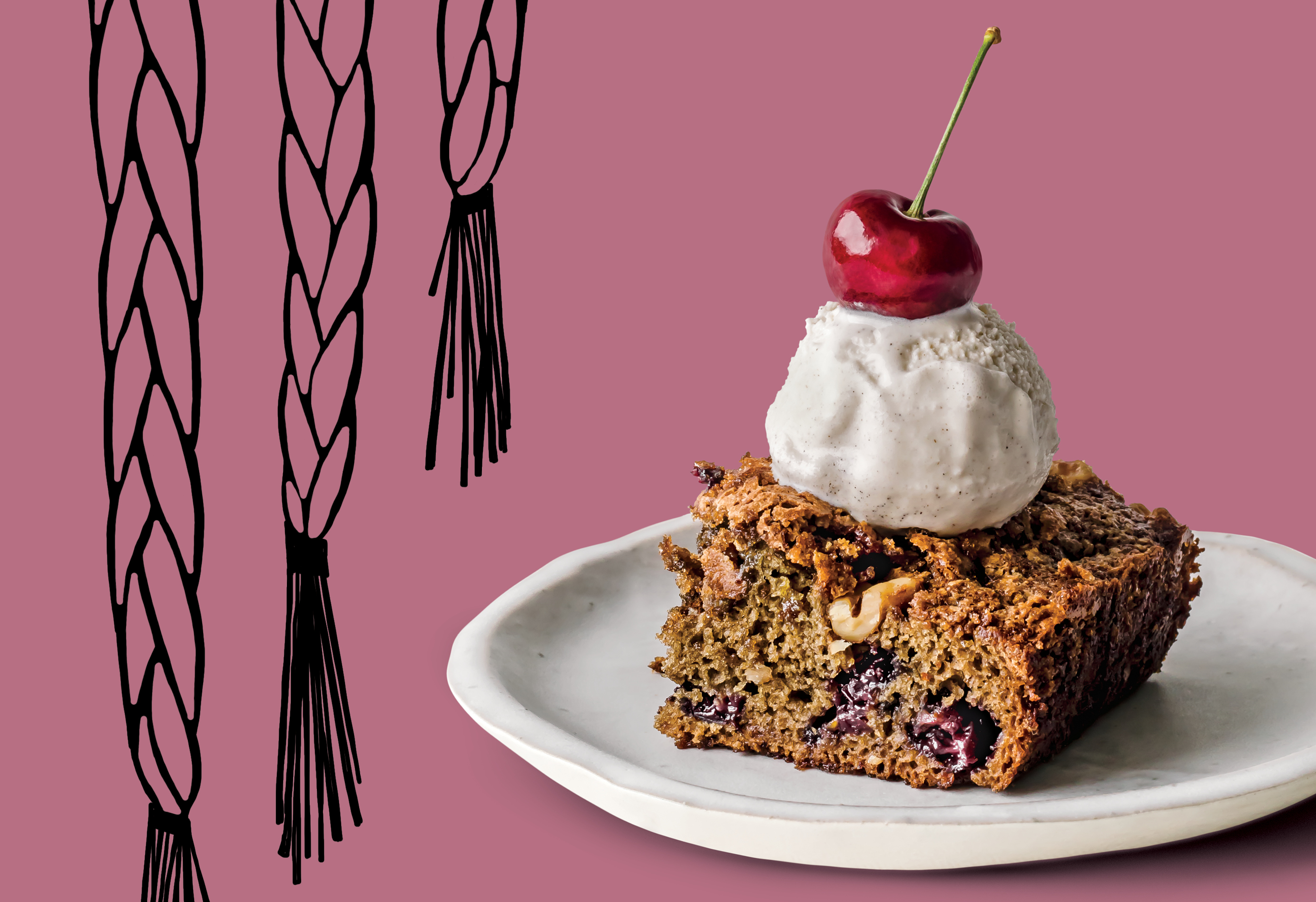 View the recipe by Inez Cook

Inez Cook is the co-founder of Salmon n’ Bannock, a Vancouver bistro that serves wild salmon, bannock tacos and bison pot roast. She’s in the middle of opening a second location, as well as getting ready to enter the retail market with prepared foods, including products like bannock in a bag, spicy maple salad dressing and cherries flavoured with sweetgrass, the key ingredient in this cake.

“It’s like a flavour sensation when you bite into the cherry,” says Cook. “We steep them with sweetgrass and [they’re] so delicious. You could serve them with sweet or savoury dishes.”

The recipe was inspired by Cook’s bittersweet history. She was one of many Indigenous children forcibly removed from their homes during the Sixties Scoop. Separated from her Nuxalk parents, she grew up eating mandarin orange cake with her adoptive family. Her mother now has Alzheimer’s disease, and Cook recently wanted to replicate the cake, to see if she could evoke memories through flavour. Unable to find a recipe for that exact cake, she tried to make one with sweetgrass cherries instead.

The recipe has become her go-to whenever she needs a crowd-pleaser. The cake, which Cook considers delicious comfort food, is easy to make—something she appreciates as a full-time flight attendant and restaurant owner who usually doesn’t have time to bake at home.

If you’re making the cherries but not the cake, don’t throw out the liquid from the steeped fruit and sweetgrass. Cook, who is always thinking about how to eliminate waste, turns it into a simple syrup to add to sparkling water, making a refreshing flavoured soda. Garnish the glass with a few sweetgrass cherries for a perfect summer drink.

This recipe, and the Salmon n’ Bannock experience, captures what Cook enjoys the most. “I like creating memories,” she says.