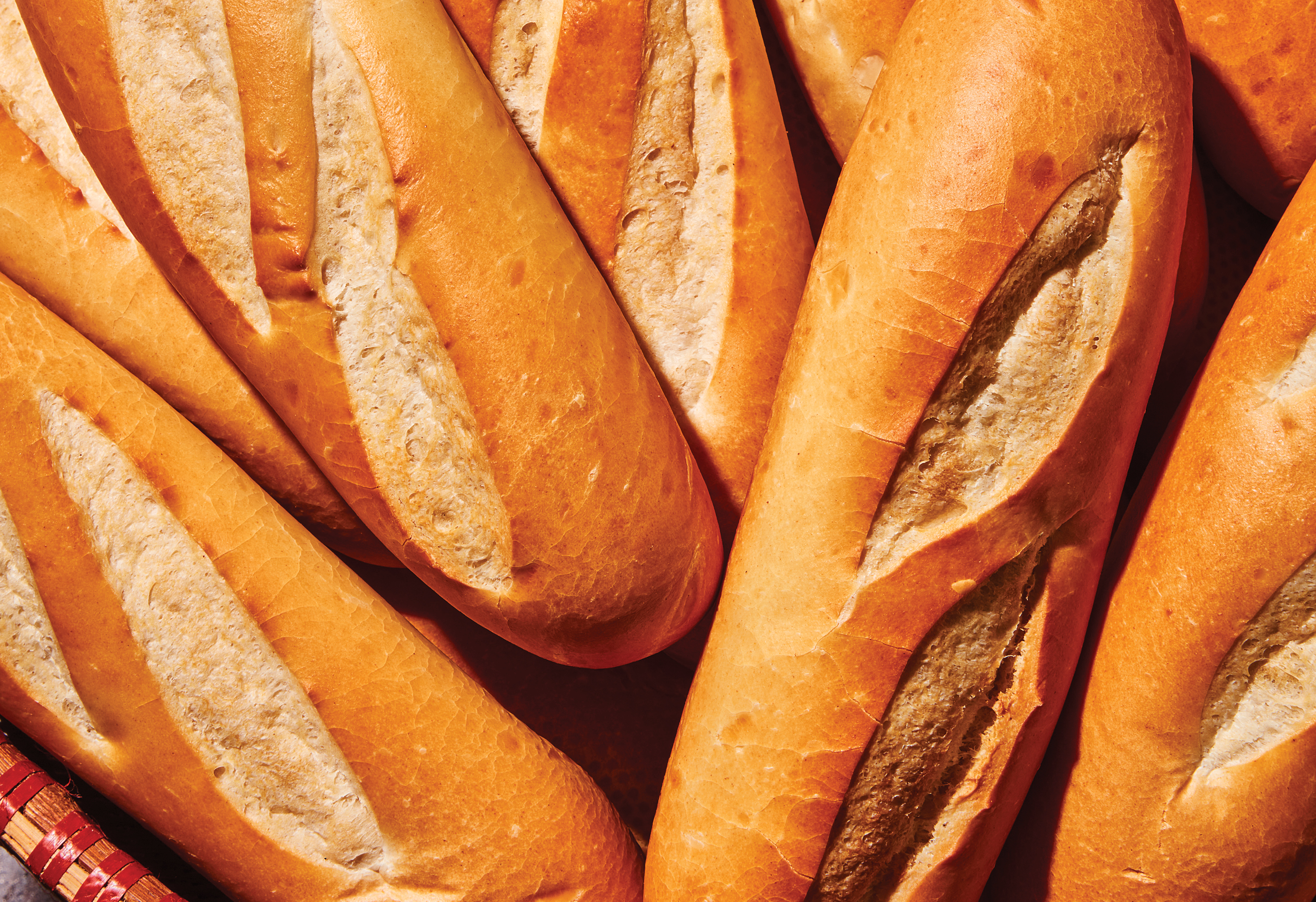 A Guide To Making The Best-Ever Bánh Mì

Bánh mì embodies the principle of balance that guides Vietnamese cooking and is an amalgam of culinary influences.

Growing up in Toronto, Tara Lê had her fair share of bánh mì. For lunch, her mom would stuff a French baguette with homemade meat fillings and top it with pickled carrot and daikon, fresh cucumber and cilantro. Lê’s favourite was bánh mì thịt Nướng (bánh mì with grilled pork), which is now a menu item at Bánh Mì Metro, her Vietnamese sandwich shop in Toronto’s Scarborough area.

Full of complementary flavours and contrasting textures, bánh mì is a culmination of influences from Vietnam’s colonial history. Its origins date back to the first decade of the country’s French occupation in the 19th century, when the baguette was a “case of love at first bite for the entire population,” writes historian Vũ Hồng Liên in Rice and Baguette: A History of Food in Vietnam.

Initially called bánh tây (“French bread” or “Western bread”), the French baguette later came to be known as bánh mì (“mì” means “wheat,” while “bánh” is a generic term for foods made with flour). The term now refers to both the bread and the sandwich that’s built with it. Unlike a French baguette, bánh mì has a crispier crust and airier interior, a local adaptation that makes it last longer in hot weather and easier to stuff. Most often, you’ll see it in individual-sized rolls for eating on the go.

Butter, cheese and ham—the baguette’s original accoutrements— went from foreign and exotic to sustenance for the masses. A piece of bread spread with butter or Laughing Cow cheese and topped with a sprinkle of sugar was once a common breakfast item (my grandmother still likes her bread this way).

The variations I’m most familiar with gained popularity toward the beginning of the 20th century, when people began stuffing bánh mì with different combinations of cold cuts, chả lụa a (Vietnamese-style ham) and tinned sardines. A splash of Maggi Seasoning sauce added a savoury depth, while pickled daikon and carrot, cucumber and cilantro reflected the local preference for bright, tart flavours and made the sandwich juicier. When I was a penny-pinching student in Vietnam, there were always crumbs all over my desk—bánh mì was a quick but substantial bite, sold by pushcart vendors on almost every street corner.

Bánh mì’s rise to fame abroad is partly due to the exodus of Vietnamese refugees following the Vietnam War. By the 1970s, food establishments catering to the growing diaspora sprang up in countries as far away as the U.S. and Australia. Nguyên Hương, a local favourite in Toronto’s Chinatown, has been serving bánh mì and other Vietnamese treats since 1986.

“[When] there was some kind of park gathering with the Vietnamese community, someone would always go to somewhere like Nguyên Hương and buy sandwiches,” recalls Joseph Nguyên, who is part of a new generation of cooks charmed by the sandwich’s endless possibilities. He runs Tâm in Toronto, where he shares his take on the original cold cut bánh mì by transforming xíu mại (meatballs in tomato sauce) into a luscious spread that’s used in addition to the usual pate (Vietnamese-style pâté). Elsewhere, you’ll find bánh mì served alongside pho broth, bánh mì sliders and even bánh mì with Korean-inspired fillings.

Regardless of how it evolves, bánh mì always starts with good bread. To buy Vietnamese-style baguettes, check local bánh mì shops or large Asian supermarkets, such as T&T, Nations or Kiến Hưng. Other lightweight loaves with delicate crusts, such as Italian or Cuban rolls, can work in a pinch. To Lê, “the trio”—pickled carrot and daikon, cucumber and cilantro—is equally vital to a tasty bánh mì. Together, they make the sum of bánh mì larger than its parts: a perfect bite. 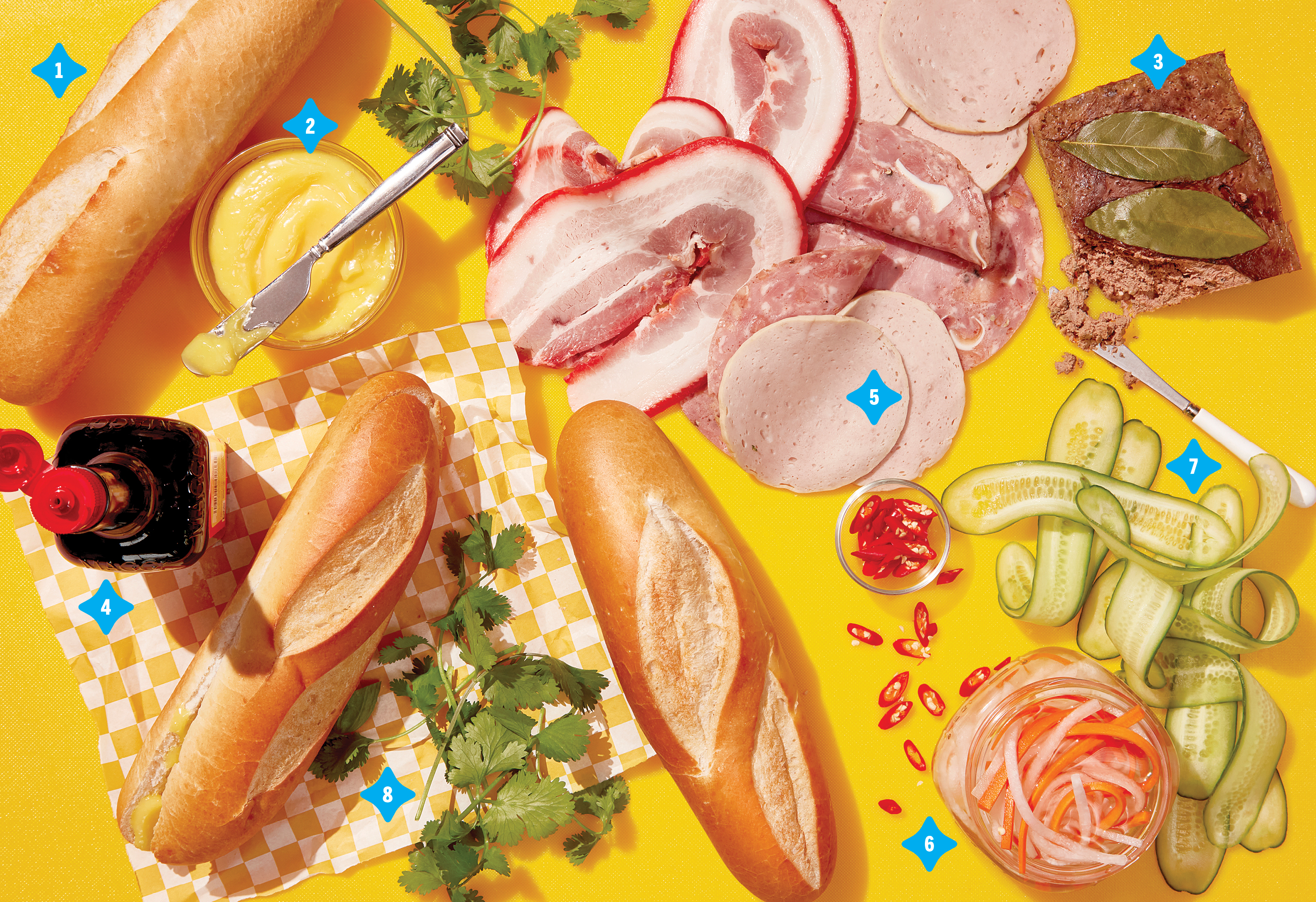 You’ll need 1/4 cup of Vietnamese-style mayonnaise. Get a recipe for bơ here.

Opt for Vietnamese-style ham (or any other cold cut of your choice).

Four handfuls of pickled carrot and daikon. Get a Đổ chua recipe here.

Jalapeno or bird’s eye are ideal. 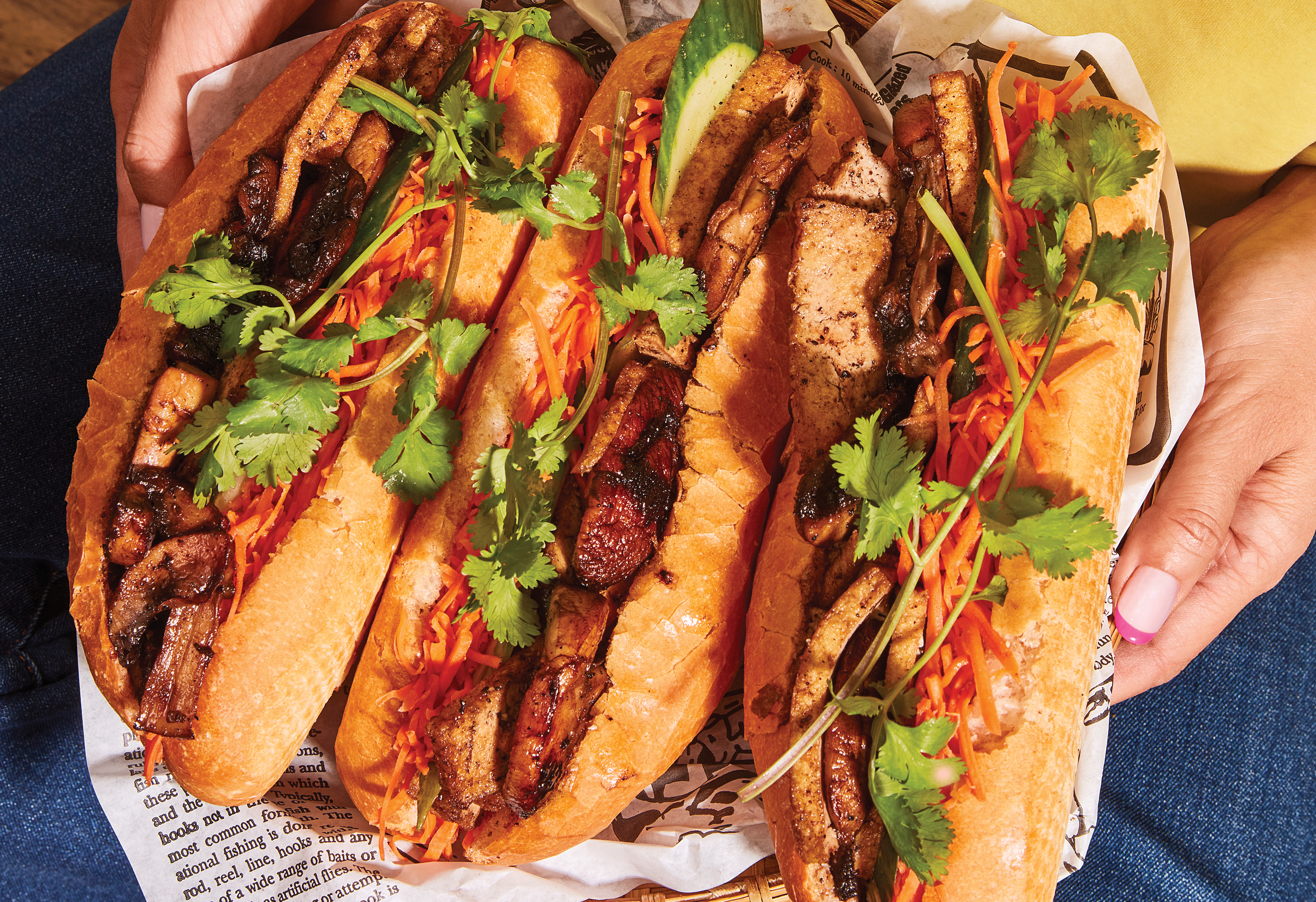 Recipe by Sarah Lee and Rod Dyquiangco of Rustle & Still

Taking inspiration from traditional bánh mì, chefs Sara Lee and Rod Dyquiangco continue to expand their menu to include more plant-based options at their contemporary Toronto café, Rustle & Still. In this recipe, tofu and mushrooms soak up a sweet and savoury sauce made from pantry staples including soy sauce and five-spice powder. 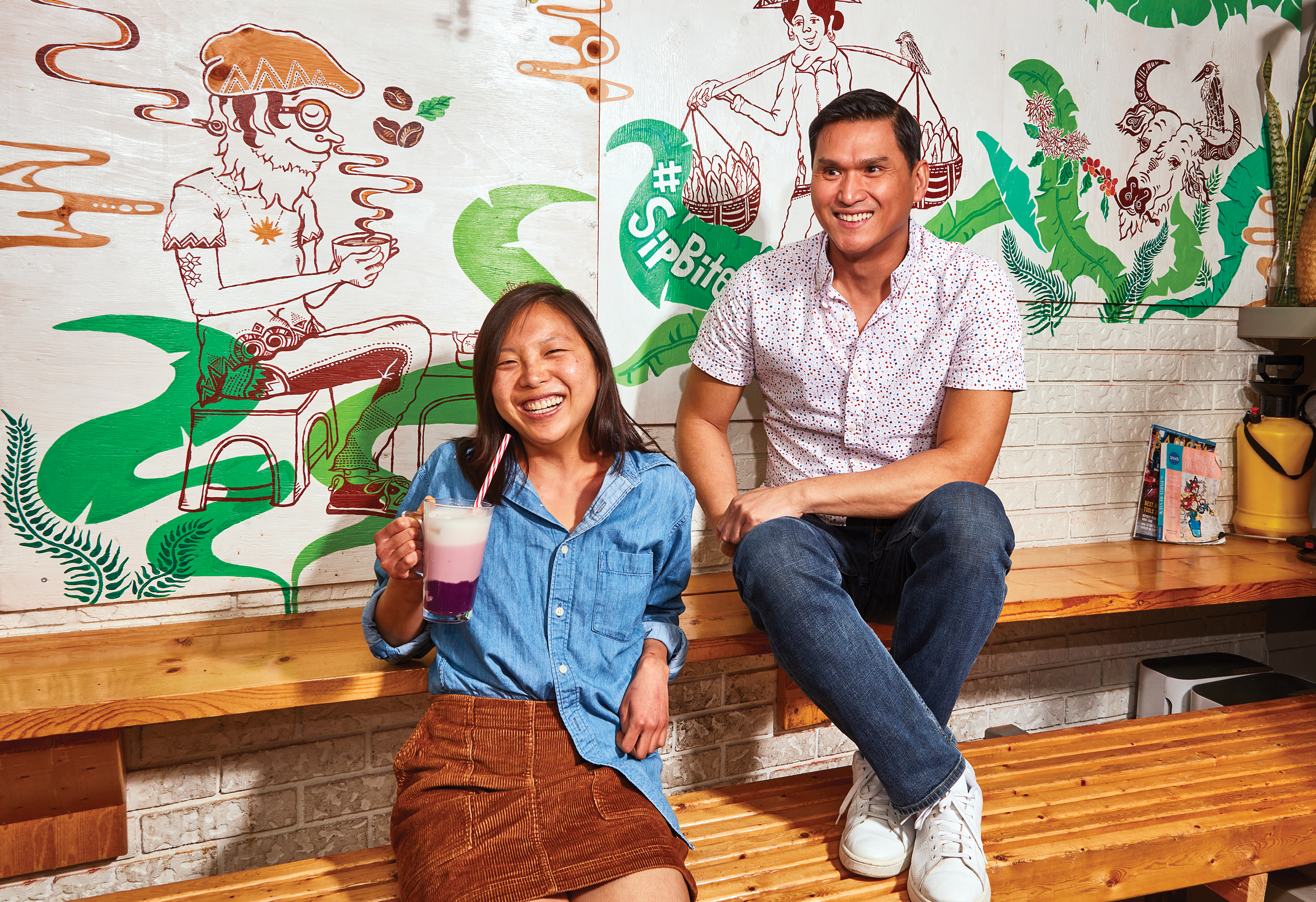 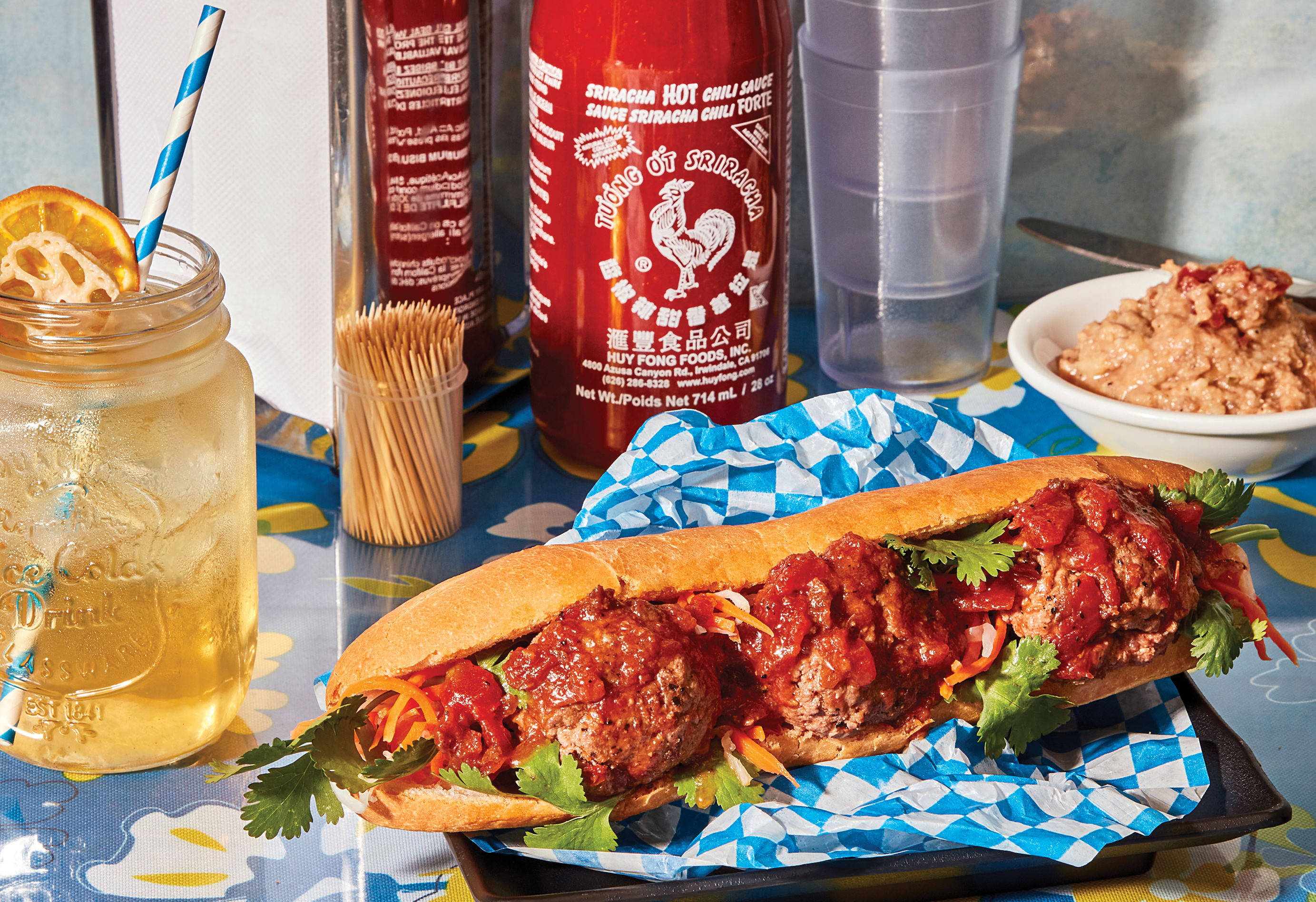 Bánh mì xíu mại is Vietnam’s very own meatball sub (“xíu mại” means meatballs in tomato sauce). Try this recipe from Joseph Nguyên, the owner of Tâm, a Vietnamese street-food joint in Toronto. Use the meatballs as the main filling for your bánh mì as we do here, or take a lesson from the chef and turn the recipe into a flavourful spread to accompany a classic bánh mì with cold cuts. 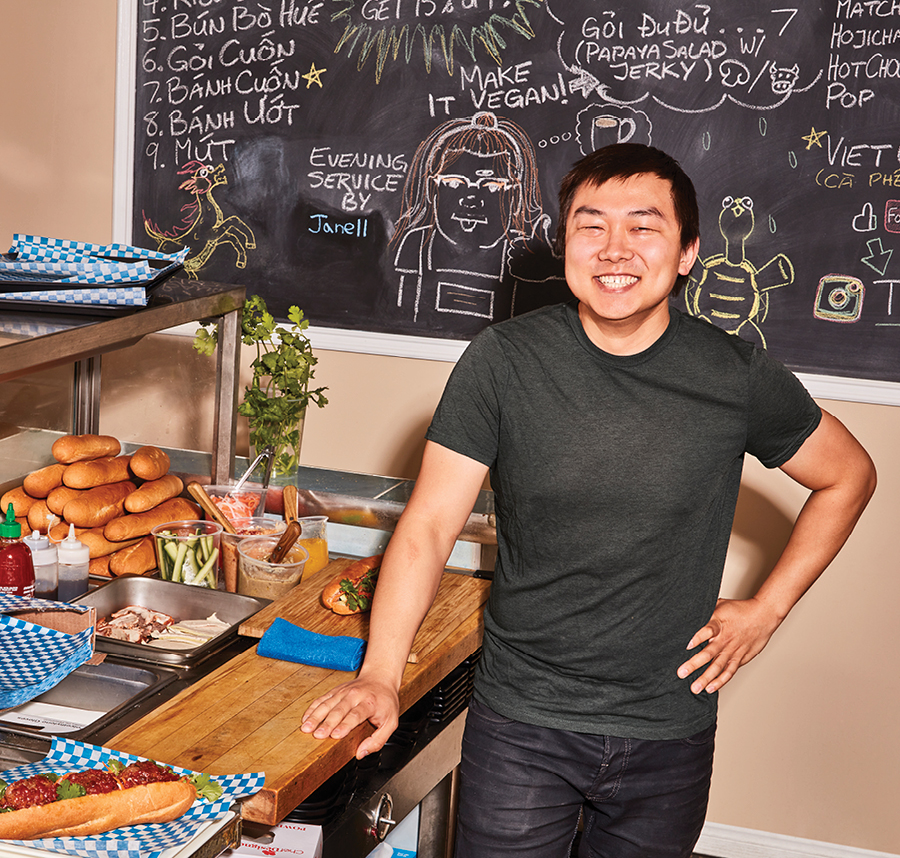 Joseph Nguyên of Toronto’s Tâm Restaurant. Growing up, he says, “bánh mì was our gathering food.” 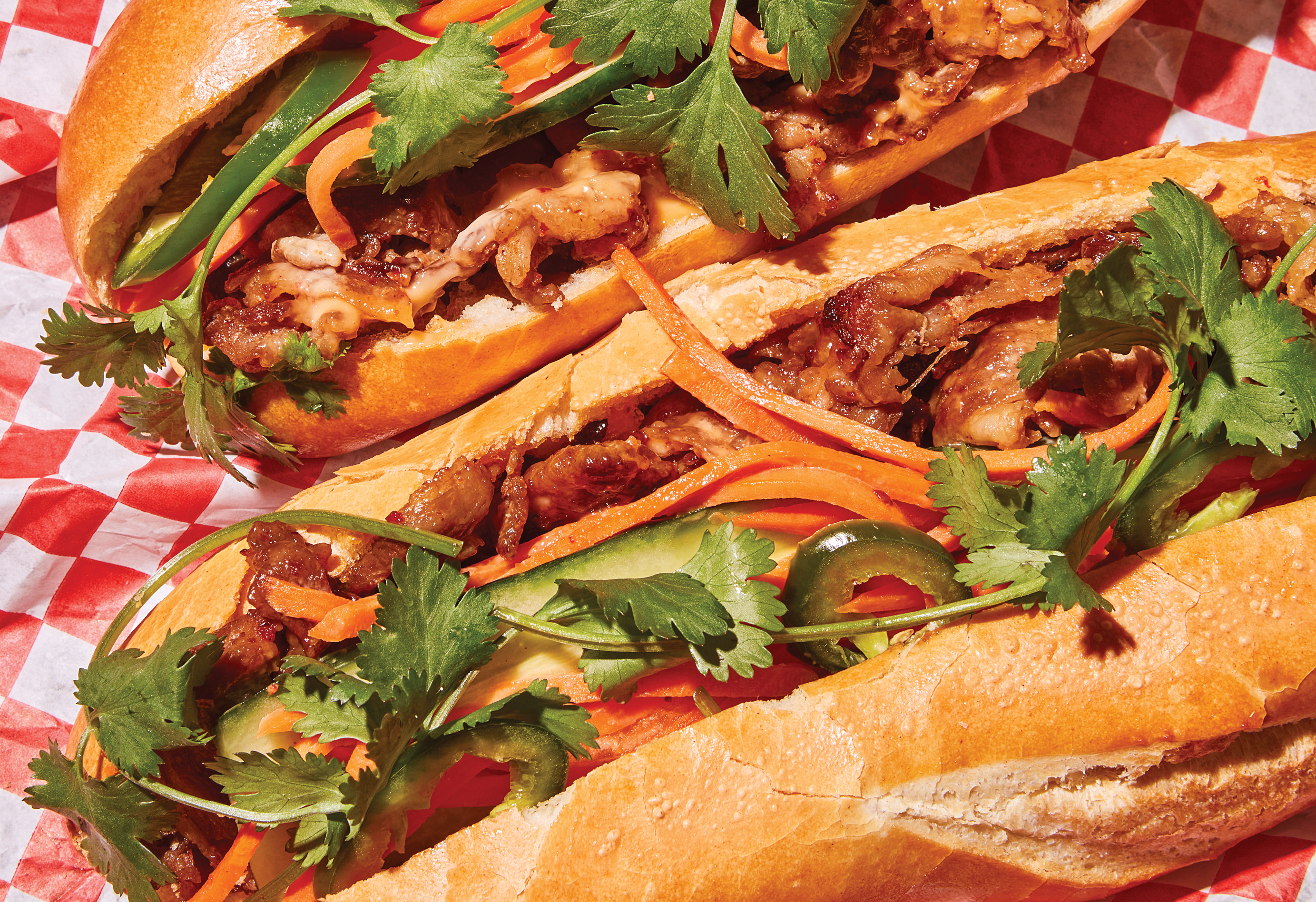 For chef Tara Lê, owner of Bánh Mì Metro in Scarborough, Ont., bánh mì was a lunchtime staple growing up. Of all the varieties her mother used to make, grilled pork was her favourite. This is her mother’s recipe, in which boneless pork shoulder is marinated in a bold and aromatic sauce. 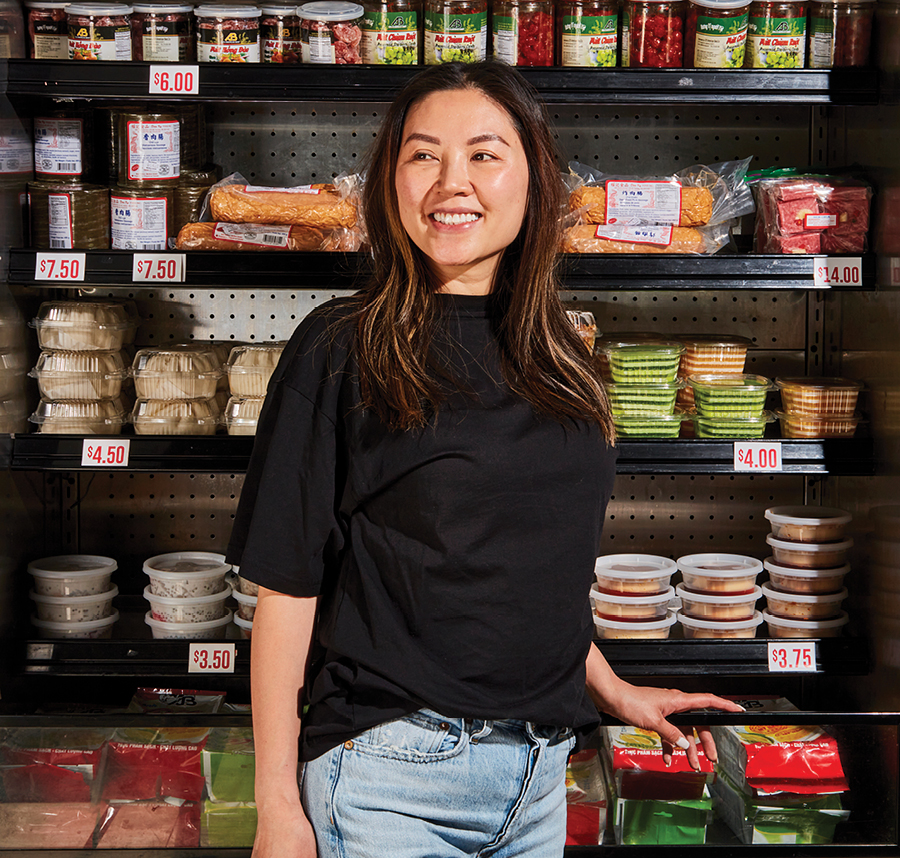 Tara Lê of Scarborough, Ontario’s Bánh Mì Metro says the ideal baguette should be moist, soft and fluffy in the centre, and crispy on the outside.