The economic crisis spurred by the pandemic has unveiled inequalities and obstacles once thought a thing of the past for women, begging the question: Have women really secured their foothold in the job market? 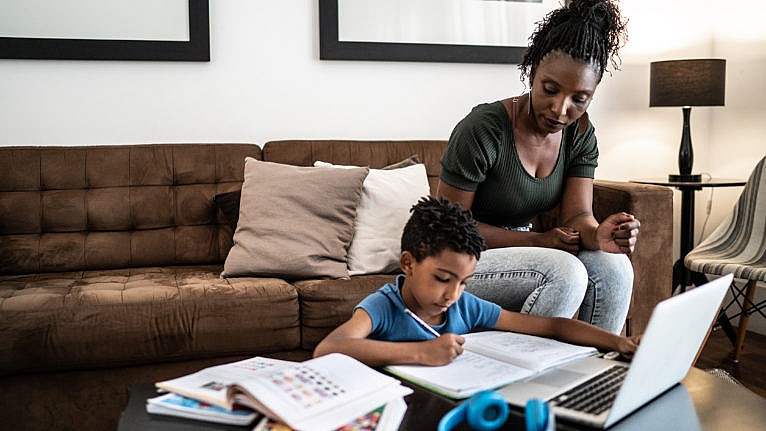 This has been a year of realizing that what we thought was solid ground beneath our collective feet was in fact a cliff that would crumble away with just a bit of natural erosion or one sharp blow. Maclean’s, Chatelaine’s sister publication, reflected on 2020 to find truths, exploded. This is one of them. Read more about the year that changed everything.

If you are a working-age woman, chances are you grew up knowing that, someday, you would be expected to get a paid job. Obstacles might appear on your career path, but perhaps unlike your grandmother or great-grandmother, you have always taken it for granted that there is a place for you in the workforce.

But the year 2020 seems to have pulled out the rug from under us. Those obstacles loom larger. Countless stories and statistics are calling that innate assumption into question. Have women really secured their foothold in the job market?

In the pandemic’s immediate aftermath, women made up two-thirds of the workers aged 25 to 54 who lost their jobs, according to the March Labour Force Survey. Data in the federal government’s July fiscal snapshot showed that, between February and May, women faced larger reductions in work hours. Among women with children, those with the youngest kids were the hardest hit.

Eight months into the pandemic, those women are having a harder time re-entering the workforce than men, says Viet Vu, an economist at Ryerson University’s Brookfield Institute for Innovation + Entrepreneurship. The hardest-hit industries were in services and personal care, where women make up a majority of workers. And disruptions to school and daycare have emphasized women’s disproportionate burdens in child care. “The pandemic hasn’t really changed that,” Vu says. “What it has done is exposed existing inequalities.”

When women began to cement themselves in the workplace around the ’70s and ’80s, institutions and policies rarely changed to accommodate them, notes Simon Fraser University’s Amanda Watson, author of The Juggling Mother: Coming Undone in the Age of Anxiety. Women were tasked with “figuring it out” while simultaneously raising families, she says, which birthed pervasive expectations around supermoms who could “do it all.”

Behind the pandemic’s broad trends are individual situations that paint a picture of women’s existing disadvantages: for example, data show that in heterosexual couples, women are likely to earn less than their partners. “A lot of decisions around ‘whose job is going to go if suddenly child care is required’ might come down to financials,” Watson says. “That’s what I would call a systemic cause of these personal micro-decisions. There is a pattern.”

In the long run, women do have a solid place in the labour force, explains economist Armine Yalnizyan. Because of stalling wage growth over the past generation or so, more women have taken up paid work to stabilize household income. “The market dynamics mean that, unless you’re willing to roll back your standard of living, women are in the labour market to stay,” she says.

Still, women could “lose ground dramatically” in the immediate future, Yalnizyan says. Labour force participation is on a negative trajectory, especially for lower-income women, racialized women and recent immigrants. Some of the jobs they relied on before the pandemic were already precarious and may never come back. If deficiencies in childcare, long-term care and post-secondary education are not addressed, that will make a return to work even harder.

For all the suffering it has brought on, this year offers a “historic opportunity,” Yalnizyan says. “We’re going to need all hands on deck. We could be actually improving the learning and earning opportunities of groups of Canadians that have been historically shut out: women, racialized minorities, recent immigrants, disabled people, Indigenous Canadians.”

Watson hopes the pandemic will force governments and institutions to think about how best to do that. “I’m feeling strangely optimistic, as burnt-out as we’re all feeling,” she says. “This is laid bare for all to see now.”