Experience the best of Turkey

On my third day exploring Turkey’s Lycian coast, I found myself in a large valley presided over by the arched walls of an ancient mausoleum. Picking my way along a rocky trail littered with Roman columns and other remnants of past civilizations, I was about to experience something else that will soon be relegated to another era: the chance to sip sage tea with one of the last generation of nomadic shepherds.

My journey had begun in Marmaris, a busy resort town that serves mainly as a port of departure for the elegant wooden gulets moored along its shore. To board one of these traditional Turkish yachts is the best reason to be there. (Other attractions include bars and beachfronts cluttered with tourists clearly undeterred by fear of sun damage.)

While boat excursions along the Lycian coast are popular, I had embarked on the only walk-and-sail tour in town. It was created by Anne Edelston, a 49-year-old British businesswoman who came to the country on holiday and fell for a Turk. She and her husband, Adil, now run Meridian Travels and Yachting, with Adil at the helm of their handcrafted gulet, East Meets West. “Our boat sums it all up,” Anne says. “Turkey is a country that feels Eastern and different and a little bit mysterious, while still being Western enough to seem comforting and familiar.”

A journey into the past
Like the other gulets that cruise the coast, East Meets West started out shuttling tourists from one seaside town to the next. But that changed one day when Adil dropped Anne off on an empty beach in a quiet bay. She wandered up into the pine forest and happened upon Mutlu, a nomadic shepherd who gamely guided her on a two-hour trek to meet up with Adil in the next bay. It was the inspiration for her walking tours — and a visit to Mutlu’s modest hut-like home is now one of the many attractions on the trip itinerary.

At five foot four with short blond hair and a penchant for pastels, Anne is hard to picture in the role of intrepid explorer. But it was her curiosity and quest for adventure that led her into the forest in the first place — and her enthusiasm is contagious. “No matter how often I do these walks, there is always something new to discover,” she says. “Finding a wild tulip on the path, watching the sea change with its many moods — it’s a luxury for me to see these things through fresh eyes.”

From early April until the end of October, Anne and Adil oversee about 25 walk-and sail tours. They follow the routes the Romans took, which lead to places you simply can’t see unless you arrive by boat. One day Anne led us along a tree-lined trail that opened suddenly onto the ruins of a Roman city, shards of ancient amphorae crunching beneath the heels of our hiking boots. Another day we passed orchards of pomegranate trees, beyond which we caught our first glimpse of Lycian tombs. There are more than a thousand of these seemingly impossible funerary monuments carved into the sheer cliffs of southern Turkey.

In her old life, Anne was neither a hiker nor a historian; now she is both. I learned to stick to the front of the group to catch snippets of history, the names of local plants (like the chaste tree, whose berries monks reportedly used in anti-libido remedies) and tips on what to look for in a hiking boot. One moment she’d stoop to show us the grooves cut in a Roman road to prevent donkeys from tumbling off the mountain; the next minute we’d find her bargaining with a pair of hunters on the crest of the rocky hillside, their rifles and freshly killed quail slung over their shoulders. (Her attempt to buy the birds for our dinner failed when the price proved non-negotiable.)

Hanging with the locals
One of Anne’s favourite walks: the hike to visit her shepherd friend, Mutlu. After we’d climbed through olive groves and taken refuge from the heat in cavernous water domes from 400 AD, our path led to his home, where we sat in the shade near the garden of his wife, Hanife. Anne chatted easily to them in Turkish, then translated. We learned that Mutlu will likely be the last of his family to embrace the nomadic way of life. (The couple sent their eight-year-old daughter to live with her grandmother on the coast so she could attend school.) Mutlu has 70 goats wandering the hills and Hanife supplements their income by selling handmade beaded necklaces.

“The walk-and-sail tour is special for me because of the people I’ve met along the way,” Anne says. “Turkish people are vibrant, generous and kind. They’re truly satisfied with the simple things in life.” That’s why her other favourite trip is the hike from Ekincik, a tiny coastal village, to the remains of Kaunos, a remarkably preserved port city containing the ruins of ancient temples, a Byzantine church and a Roman amphitheatre. It was in Ekincik that we met Mehmet and Hatice, who took Anne in one day when she wandered by. We were welcomed with a delicious lunch of gozleme (pancakes filled with spinach and cheese) and ayran, a refreshing yogurt drink made with milk from the couple’s cow. We watched Hatice cook the pancakes in the smoke-blackened fireplace of her open kitchen, then enjoyed a leisurely lunch in her yard, shaded by grapevines and surrounded by clucking chickens and inquisitive ducks.

Life on deck
One of my biggest pre-trip concerns was spending seven days on a small boat with 15 strangers. But, with such a diverse group of interesting and entertaining people on board, it turned out to be one of the highlights. (Thanks to my Australian shipmates, I now know several creative euphemisms for Speedo-wearing males.) When not in the mood for company, I could easily find a quiet spot to read or watch the shore go by. Unlike much of the overdeveloped Mediterranean coast, the pristine view is of rocks, trees and sea, with the mountains rolling gently up behind, uninterrupted.

Gulet cabins are small and comfortable and have ensuite bathrooms (warm water is available in the evenings, when the generator runs). Anne encourages everyone to spend at least one night under the stars, so I dutifully lugged my blanket up to the row of cushions on the sundeck. Once I’d experienced the fresh breeze blowing across the bow and a sky full of stars undimmed by light pollution, I never slept below deck again. 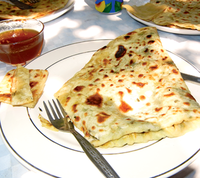 Most meals were served on board and assumed the atmosphere of a boisterous family dinner. We sat at a mahogany table laid with traditional Turkish fare: barbecued fish, sigara borek (cheese and parsley spring rolls), stuffed peppers, eggplant stews, creamy yogurt and crisp salads. Each meal ended with a chorus of “Elinize saglik” (health into your hands), to which the chef responded with “Afiyet olsun” (and may your food give you health). (Photo on left: a fresh gozleme pancake with honey)

Boats, bazaars and baths
Peaceful nights were followed by action-packed days. We rode a riverboat through reeds that, rumour has it, Bogart and Hepburn chugged through during the filming of The African Queen. We enjoyed the spectacle of the mud baths near Dalyan, fed crabs to sea turtles, snorkelled in the ruins of Cleopatra’s baths, smoked hookah pipes in Fethiye’s bazaar and wandered through Kayakoy, the eerily empty hillside village abandoned by both Greeks and Turks 88 years ago after the Greco-Turkish war.

Each day ended with a lazy swim around the gulet, moored in a sheltered cove for the night. Occasionally, another boat dropped anchor nearby, causing us to glare across the water at the interlopers. But on most days we were more likely to happen upon grazing donkeys or goats perched on the walls of ruins than other tourists. And that’s the way Anne hopes it will stay. “It’s only us walking these paths because we were the ones who discovered them,” she says. “When we meet shepherds on the mountainside or visit a villager’s house, it’s a true reflection of life here.”