Mia Noblet, 23, picked up the extreme sport three years ago. Here, she talks about smashing world records and (mostly) learning to ‘be in the moment,’ almost half a kilometre in the sky. 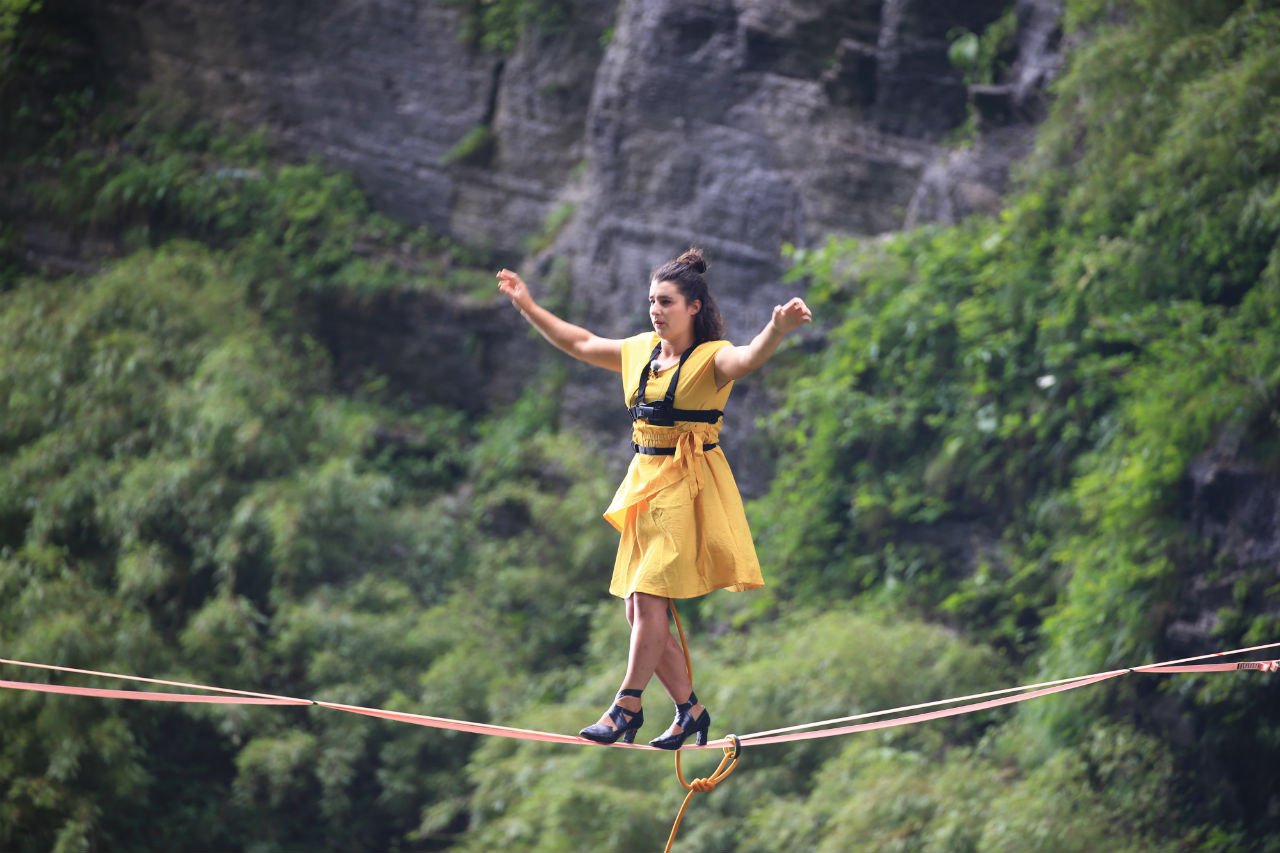 Wearing a yellow dress and black pumps taped to her feet, Mia Noblet steps out onto a 70-metre-long slackline, high above the Zhangjiajie National Forest in China. Twenty-two minutes and 36 seconds later, she makes it back onto solid ground, where she’s met with a barrage of cameras hoping to capture the moment for Chinese TV.

Terrifying as it is to watch her so high up, her biggest challenge was the footwear. “They were like, ‘Can you walk the highline in high heels?’ I was like, ‘No, I don’t walk in high heels on the ground,'” Noblet — who typically slacklines barefoot — said.

That was just the most recent high-profile walk for Noblet, who holds the world record for women’s highlining (which is measured by distance walked). Slacklines are, as their name implies, a more flexible version of a tightrope — what’s most frightening about watching Noblet (apart from the epic drop) is seeing her constantly right her balance against a bouncing line. Slackliners rig a flat webbing (instead of the wire cable used for tightropes) between two points. You’ve likely seen someone trying a line tied between two trees in a park; when the line is rigged high enough to be dangerous, it becomes the extreme sport known as highlining. (Most highliners, including Noblet, walk with a safety harness leashed to the slackline, though there are those who are free-solo walkers, who walk without harnesses.) On April 21 this year, Noblet broke her own previous world record when she walked a 614-metre long highline, 450 metres — or 150 storeys — above the Canion do Espraiado in Brazil. 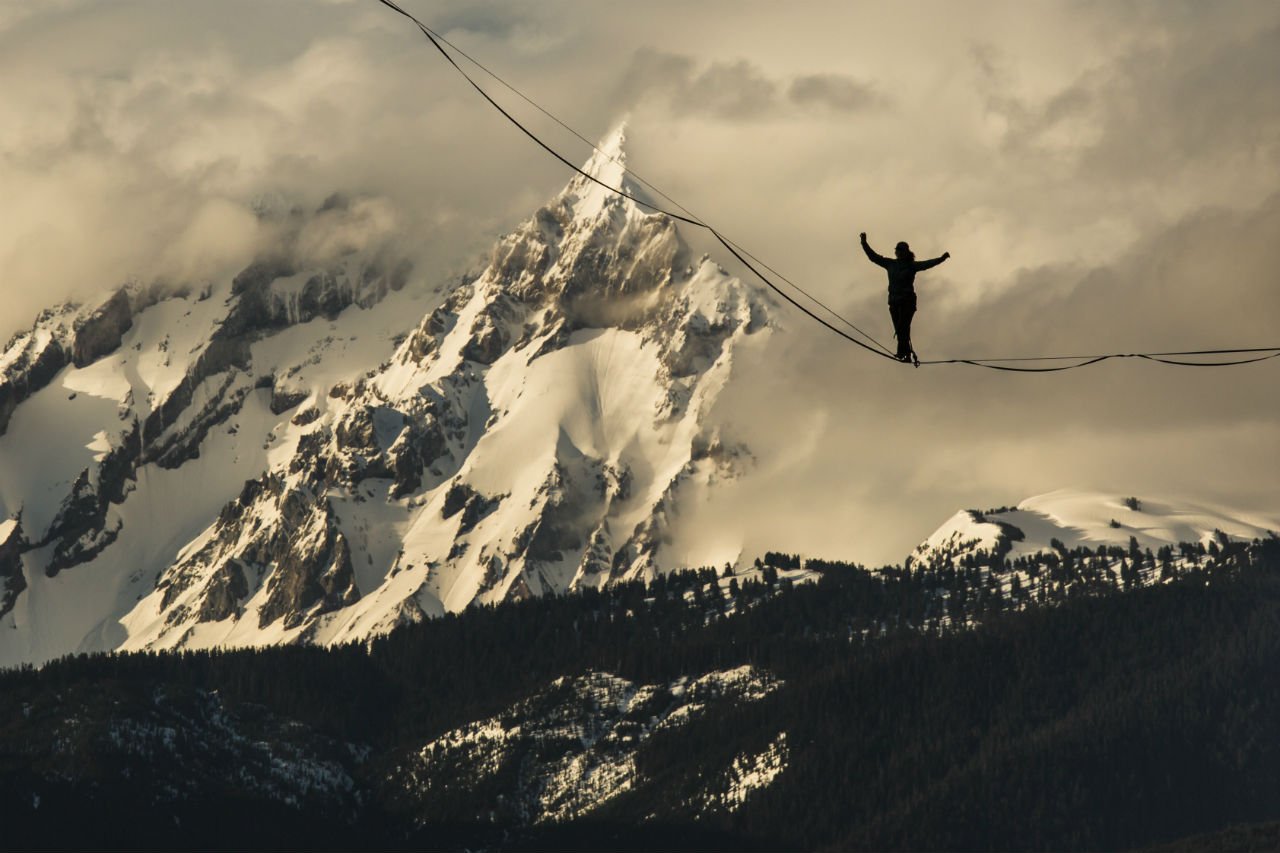 The 23-year-old Noblet — who grew up in Nelson, in B.C.’s southern interior — started out as a figure skater, then switched to speed skating. A photo of free-solo slackliner Dean Potter that she saw during childhood stuck in her mind, and eventually persuaded her to try something more outdoorsy. “I was tired of being stuck inside. It didn’t change if it was raining or if it was sunny out.”

That was three years ago. Since then, she has made a career of slacklining, working on numerous highline projects and slackline jobs, such as those with the group SlackLifeBC, and has travelled to more than 10 countries in North America, South America, Asia and Europe. 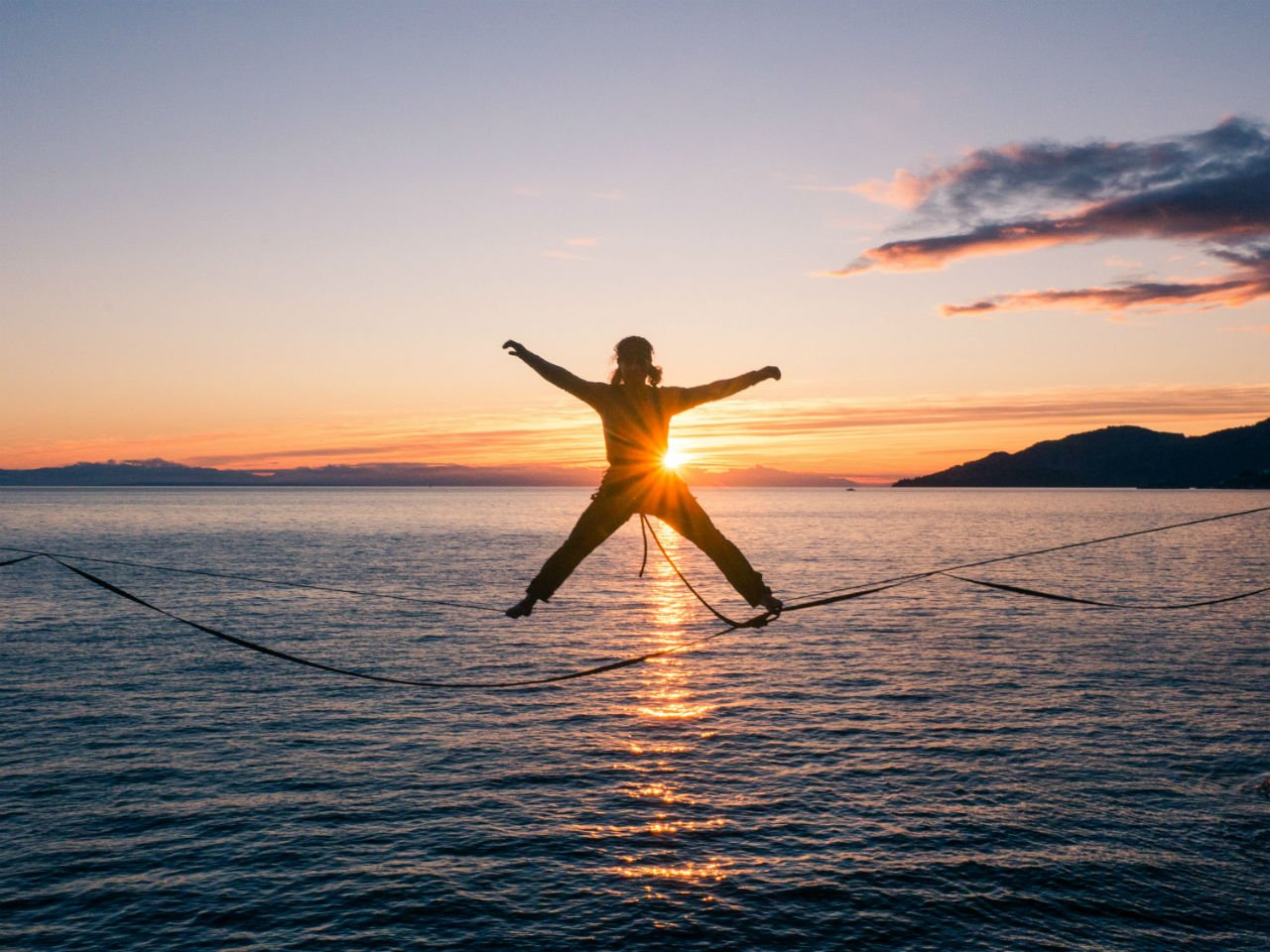 Three years ago, at West Vancouver’s Lighthouse Park, Noblet took her first step on a highline 15 metres, or 4.5 storeys, above ground — although by British Columbia standards, it is only a midline. (Photo, Anthony Boulay)

On taking the first step

I met some slackliners in the park and they told me, ‘Yeah, there are slackliners here, you just have to go join this Facebook page,’ and I did. The next weekend they posted they were going [to Lighthouse Park]. So, I went to MEC and bought a harness.

I didn’t know what I was getting myself into. I think that first time I was able to stand up and take one or two steps, but it was absolutely terrifying — and at the same time thrilling. I wanted to come back and try again because I knew that once you got to walk and do it, it would be the coolest thing ever.

Mia Noblet first became the female world record holder for highlining a year after she picked up the sport, when she walked for 222 metres above Hunlen Falls in British Columbia in 2016. The video above shows an exhausted and exhilarated Noblet as she finishes her record walk.

On safety and overcoming fear

Slacklining is one of the safest things you can ever do, if it’s rigged properly with good conditions. Everything is backed up. There is nothing that can go wrong. If you fall, there is only air to hit. It’s not like mountain biking where you have trees and rocks. But you need 100 percent trust in the gear you use. You need to know how it’s used, the strength of it. When I started, I didn’t have any clue what the gear was or how strong it was. I think it took me a year to slowly get over the fear and fully trust everything. 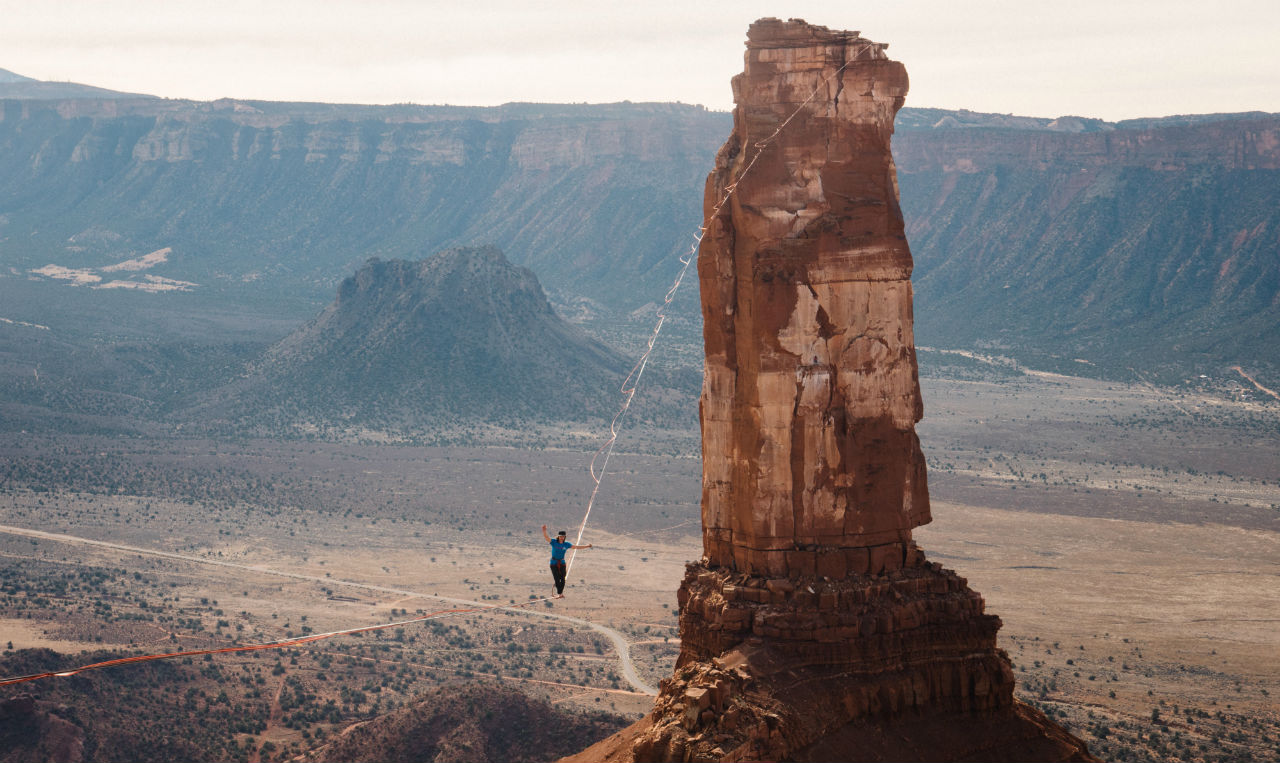 Noblet broke her Hunlen Falls world record when she was in Moab, Utah with a 493 metre walk, 120 metres above ground, in 2017. (Photo, Levi Allen/@LeftcoastMediaHouse)

On learning to fall

[Learning how to fall] was the mental thing for me to switch. Now, I have no problem falling. There are still lines now that will terrify me; the fear never leaves completely. Some lines I feel 100 percent comfortable with now, 100 percent where I belong, super relaxed and calm. And then there are some lines that are just terrifying. The fear is always there because your body isn’t meant to walk on a wobbly piece of webbing, but your ability to trust everything and let it go and not let that stop you – you get better at that, and eventually it is automatic. 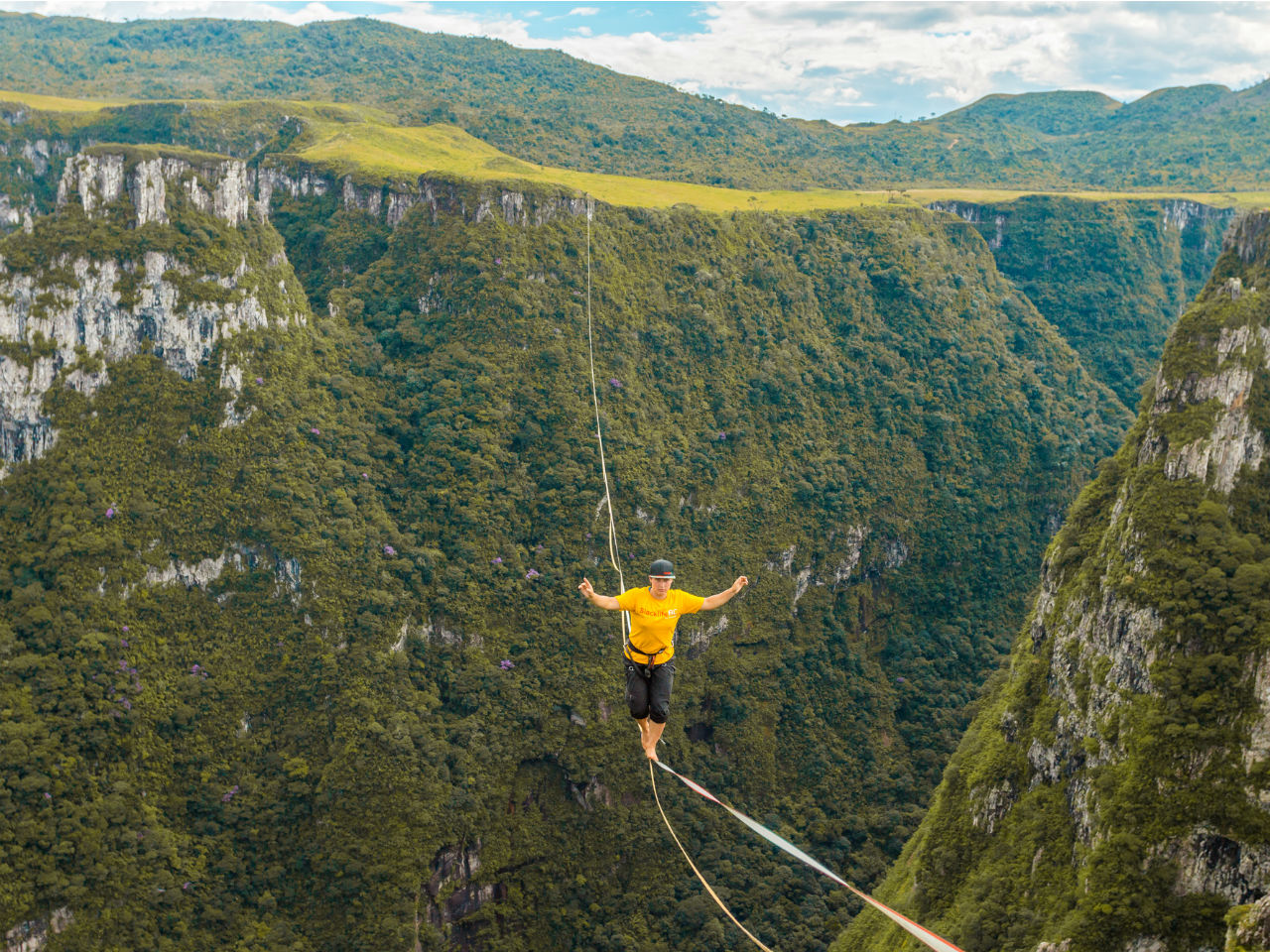 On breaking records and why she slacklines

As soon as I start walking, I forget. I don’t even know how long I’ve been on the line. I don’t remember anything. I just walk and eventually you get to the end. Usually at the end you’re pretty exhausted, but pretty happy to have walked something new. The idea of a record is probably the last thing that crosses my mind.

Slackline just forces you to be in that moment. I think in the modern world where there is so much distraction and media, internet — so many things around us — we’re trapped in a world full of things that make you worry about the future or be sad about something that happened in the past. Slacklining brings you to these beautiful places in the exact moment. There is nothing that makes you feel so alive than just being there.