Six expert tips on how to be a great hostess

On Mother’s Day, I decided to host my first lunch party at my house. This is because I felt like being a “good” daughter, my mother deserves it, and my brothers weren’t stepping up to the plate. I was scared out of my mind. 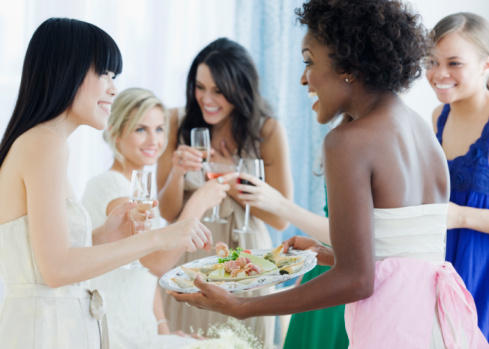 On Mother’s Day, I decided to host my first lunch party at my house. This is because I felt like being a “good” daughter, my mother deserves it, and my brothers weren’t stepping up to the plate. I was scared out of my mind. I couldn’t say for certain that I don’t like hosting, because I’d never done it before. But I can say for certain that I much rather be a guest than a host.

I was hosting ten people, including my boyfriend’s mother, his children and my family. I pretty much panicked right after getting off the phone with my mother and saying, “I’d love to invite you over for lunch.” What was a good time to start? I don’t have enough serving spoons! I need to clean the house! How long will they stay for? Who will clean up?

I called a local restaurant to cater the food. All I would have to do is pick up beverages, napkins and cups. (My cutlery situation is not up to par for so many guests.) I was pretty much all nerves the entire morning, especially when I sent my boyfriend to fetch the food I had ordered and he came home with a bagful of bagels…and only bagels. At the same time, the catering person called to say, “Your husband or boyfriend or whoever forgot to pick up the platters!” I looked at my boyfriend and said, “What the hell am I going to do with 24 bagels?” He headed back to the restaurant to get the actual food. And all I kept thinking was, “Why oh why did I decide to do this in the first place?” It was not getting off to a good start.

I got some advice from Jerry Comfort, previously the executive chef at Beringer Vineyards and now their wine educator. He hosts three to five parties a week.

1. Comfort suggests that one of the most important things when hosting is to offer options to guests. “Everyone has their own taste.” A simple way of hosting a party, especially for first timers, is to make it a potluck and ask people to bring appetizers. “It’s fun,” he says, “to see how creative people are nowadays, thanks to cooking shows and the Food Network.” And, it makes things more casual because they’re contributing and probably bringing something they like.

2. Studies he’s read and commissioned have shown that 75 percent of Canadians would rather stay in than go out to a restaurant, which means a lot of people are hosting nowadays. “But times have changed. In the 60s and 70s, it was maybe meatballs. Now we do sliders,” says Comfort. “It may have been fondue, but now we do white truffle fondue.” One suggestion, he says, is to always have a cheese plate. Apparently, they never go out of style. “That’s a start to a beautiful gathering. There are so many great cheeses out there.” (And, not that this matters, but he says women love cheese.)

3. For a first time host, he suggests hosting “linner.” Not lunch, not dinner, but that time in between. “It’s one of my favorite times to host, because it lets people sleep in and do their chores or go to the gym. And then you give them food in the late afternoon, and it could go on into early evening but you’re not ending up having people over until midnight.”

4. He says that a first-time host has to act like she knows what she’s doing. “There is definitely a confidence factor.” He suggests that a first timer start small, like just inviting family, then move on to inviting friends, and then hosting a larger party. “That will build up your own confidence.” He jokes, “I host for my family first because they respect me the least.” (Plus, your family has to love you even if you give them food poisoning.)

5. I asked how you know if your hosting is a success. “If half-way through the party or gathering, you can’t hear yourself talk, then it’s a success, because everyone else is laughing and talking,” says Comfort.

6. When it comes to cleaning up, Comfort says, “It’s one of those tactical things you have to figure out. I say that you clean moderately during the party, just so things look clean, but still like a party. Wait until two-thirds of the guests have left to deal with the large pots and pans and even then just put them in the sink.”

Even Comfort, who hosts numerous parties a week, says if he had to choose, he’d rather be a guest. However, you may just get an invite soon for “linner” because I’m not as fearful of being a host anymore. No one got food poisoning, and there was laughter at my first every hosting event. You won’t mind if I pat myself on the back, right?