Shania Twain Is Having A Moment. 7 Reasons She's Still Queen Of Our Canadian Hearts

And a song to go with every reason. 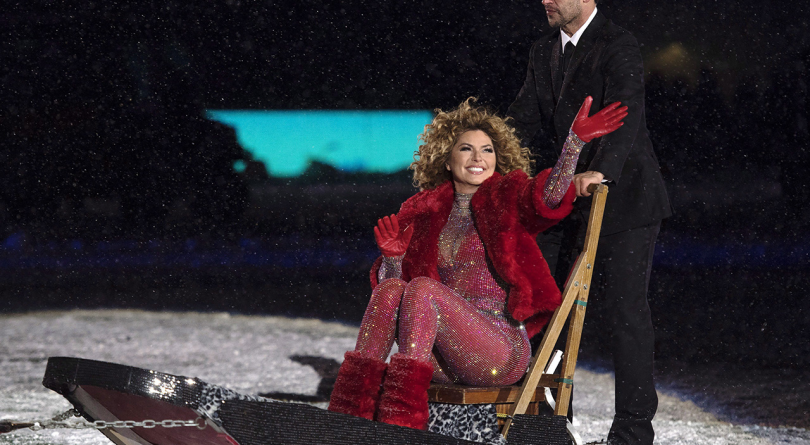 Shania Twain is literally the best: One of the bestselling artists in all of music history and certainly the bestselling woman in country music. There’s also something about her that makes you feel like she could be your (super hot, super accomplished) best friend — the kind of woman who’d be fun to trade stories with over a glass of wine. And then there’s the way she flaunts the fact that she’s Canadian — as per her halftime show at Grey Cup 2017.

After a 15-year hiatus, Twain released what might be the most honest and approachable record she’s ever made this past September. Now is her first album since her 2010 divorce from record producer Mutt Lange, who left Twain for her one-time best friend. (Twain later went on to marry the friend’s ex.) The betrayal is a major theme on the album of songs the 52-year-old mostly wrote herself — one even homes in on the exact moment she learned of the affair. But Twain always flips the script to focus on how she’s working to live her best life, the best way she knows how.

So, in tribute to this Canadian treasure, here’s a look at just some of the many reasons we love Shania (complete with a corresponding soundtrack).

Born in Windsor, Ont., as Eilleen Regina Edwards (she later took her stepdad’s surname), Twain grew up impoverished in the northern Ontario town of Timmins, and as a teen helped her mother and siblings escape domestic violence at home. Both of her parents died in a car crash in 1987. She contracted Lyme disease from a tick bite in the early 2000s, which left her with vocal dysphonia (she now has to do lots of warming up and physical therapy before performing). She went from thinking she would never sing again, to doing a Vegas show, writing an entire record of new material and planning a world tour. Though these experiences left her “shattered,” Twain said she wouldn’t give back any of the heartbreak. “I don’t want to forget about it. It’s made me who I am.”

Song: Life’s About to Get Good

Filming something special for the @usopen 🎾

She’s a music industry pioneer — and an under-appreciated songwriter

Twain’s unique blend of country and pop reshaped the commercial music landscape in the 1990s, making her one of the most successful country crossover artists of all time (she has five Grammys — “You’re Still The One” was nominated for four in 1999 and won two). But despite her hit-machine bona fides, it’s rare to hear Twain lauded for her ability to write catchy, relatable music for broad audiences (this might be due to her biggest hits being co-writes with ex-husband Lange, widely considered to be a genius of popular music). Now, with her return to the spotlight, Twain’s being praised by young performers who count her as a huge influence in their own careers.“I’m enjoying the compliments and enjoying the fact that I don’t have to fight for that place,” she says in a new interview with Maclean’s.

Song: You’re Still The One

Despite being mainly based in Switzerland and Las Vegas, Twain has kept strong ties with Canada. She maintains a cottage on Lake of Bays in Ontario’s Muskokas, and her charity, Shania Kids Can, helps children and youth here (and in the United States). And who could forget the time she hosted the Junos in a revolving wardrobe of crop-top hockey jerseys? She practically outdid herself this year, riding into TD Place Stadium in Ottawa on a dogsled before performing the halftime show at the 105th Grey Cup. And, it was on the 1993 Canadian Country Music Awards that Twain had her first major live performance, of her debut single “What Made You Say That?” Fun fact: Avril Lavigne got her first big break when she sang that song after winning a local talent contest that Twain held on her Come On Over tour years later.

Song: What Made You Say That?

Oh my sweet, old friend Tango. Dusty here after rolling in the sand. He likes his cuddles!

She loves them so much that she took a horse trailer along with her during parts of her Come On Over tour in 1998. She even included them in her Vegas show, which picks up again in 2018 after she’s done touring the new record (imagine singing while trying to keep the focus of a white stallion so it doesn’t get spooked and trample on the audience? Impressive). Horses also feature prominently in Twain’s early music videos: In the opening scenes of the video for “Any Man of Mine,” shot on John and Bo Derek’s ranch in 1995, Twain is seen corralling a herd of cattle on horseback (and looking amazing while doing so, of course).

Song: Any Man of Mine

She’s a champion of women

The 1990s was a good decade for women in country music, and Shania was at the forefront with her monster hit single, “Man! I Feel Like A Woman!” The upbeat track became an empowerment anthem, celebrating women’s “prerogative to have a little fun,” judgment-free. The music video for the song became iconic in its own right, with Twain dressed up in a sexy tux, a band of Zoolander-lookalikes behind her. Listen closely, and you’ll find themes of women’s empowerment in many of Twain’s songs, from “Any Man of Mine” to “If You Want to Touch Her, Ask!”, which dealt with the issue of consent long before it entered the public dialogue.

Throwing it back to the "That Don't Impress Me Much" video. Show your spots and visit iFakeit.org to find out more. #🐆 #IfakeIt #TBT

She’s not afraid to say what’s on her mind

Twain has not held back in sharing her opinion of the woman who betrayed her: “[S]omeone scammed her way into my trust, so completely under the radar, that my astonishment compelled me to share how these events unravelled, in case they help readers recognize this happening in their own lives,” she wrote in her 2011 autobiography From This Moment On. “Whether it be in business, family, friendship, or marriage, it’s so important to keep your eyes open for cons, liars, and cheats who will comfort you with one hand on your shoulder and rob you with the other.” In other words? You don’t mess with Shania.

Song: That Don’t Impress Me Much

Morning coffee with my favorite. ☕️🐶

She’s kind of a homebody

Like most of us, Twain appreciates a little downtime — which will likely be hard to come by as she promotes her new record with a 48-stop world tour. After the massive success of her 1997 record Come On Over, she and Lange moved to a secluded château in Switzerland, away from the prying eyes of the public. “I do get very rattled if I don’t get enough [normalcy] in my life,” she told Maclean’s earlier this month. “I like solitude. I can’t even write music if I’m not isolated.” Do what you have to do to keep the music coming, Shania — you’ve been gone way too long.