The most touching acts of forgiveness we've ever seen

In an attempt to reclaim the humanity lost during the Rwandan genocide, photographer Pieter Hugo documents the victims of violence accepting contrition from the perpetrators. 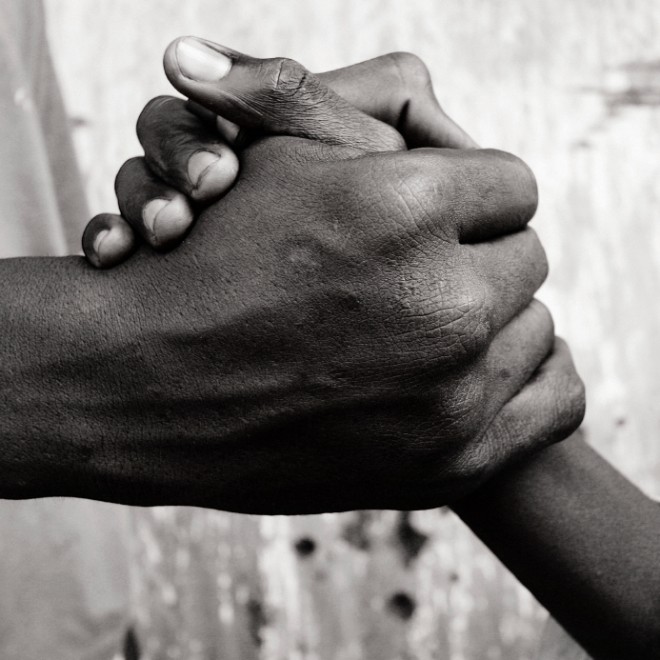 To forgive, to forget, to move on after inexpressible pain and suffering and in such a way that doesn’t obscure the joys that surround us — it’s the challenge that nearly every human being faces at one point in their lives. Some of us get luckier than others, however, when it comes to the scale of the sorrows that need to be digested and absorbed.

The people of Rwanda fall into the unlucky category, having endured one of the bloodiest and most brutal genocides in recent history.

Twenty years after the end of the war in Rwanda there is a movement among the population to forgive, reports The New York Times’ Susan Dominus. To give vivid life to that ongoing project of civilian regeneration, the Rwanda-based organization Creative Court commissioned a series of “Portraits of Reconciliation” that depict the victims of violence accepting the contrition of those that have done grievous harm to them.

The photographs were taken by renowned South African photographer Pieter Hugo and document a nation’s attempt to reclaim the humanity lost during those awful months in 1994. You can see examples of the photos on the Times’ website here.

Not only has the Times offered a selection of photos to look at, they’ve also accompanied each slide with explanatory text from the victims and the perpetrators.

The stories are terrible — reminding us of the great pain human beings can inflict on one another — but they also reveal how great is the human capacity for goodness, repentance and forgiveness. The photographs should inspire anyone nursing a private grudge or hurt, or consumed with guilt for an ugly act, to move forward.

Pieter Hugo summed up the meaning of the photos best.

“These people can’t go anywhere else — they have to make peace. Forgiveness is not born out of some airy-fairy sense of benevolence. It’s more out of a survival instinct.”