Something REALLY does happen to me EVERY DAY that makes me scream, "HELP! FIX MY LIFE!" Most of the time, incidents – like roof leaks, or a mouse in the house – are out of my control and stress me out. Yesterday, what happened was also out of my control. 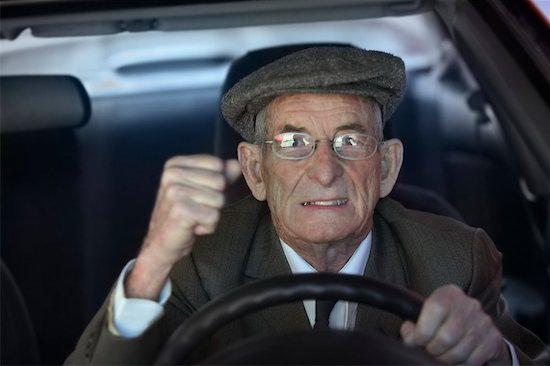 Something REALLY does happen to me EVERY DAY that makes me scream, “HELP! FIX MY LIFE!”

When I say I don’t follow drama, it follows me, I believe this. I was on the way to my therapist’s (for a drama-free life!) when I was involved in a road rage incident.

I had signalled and pulled into another lane. Next thing I knew, a man was pounding on my widow, screaming bloody murder that I had made his tire hit a curb. He immediately had the police on the phone, as if I had just murdered someone. I tried talking to him.

HIM: YES YOU DID! I’M NOT TALKING TO YOU.

ME: YOU HAVE ISSUES!

HIM: Yelling at police on phone: “I’M NOT LETTING HER GET AWAY!”

In these situations – big crazy men yelling at me for apparently no reason – I usually have no idea what to do, except cry. With tears, I checked out Road Rage Man’s car. There were tiny scratches on his tire, but who the hell doesn’t have scratches on their tires? There was no damage, however, because there was no accident. Our cars didn’t touch. But this guy was MAD. I’m talking raging,-you-should-read-Anger-management-for-dummies mad. I did something I never thought I had in me. I drove away from this ranting lunatic. (And then took every side street possible, to ditch the guy, who I thought for sure would chase me and kill me.)

I expected the police to be outside my house when I got home. I was paranoid I broke some law. I called the police to explain what happened and it turns out I was right to leave. I didn’t break any law. You CAN drive away if there was no accident, no one is injured and if someone is just yelling at you. But angry people? I just don’t get what to do with them, especially angry men who have road rage.

I talked to Owen Williams, a relationship expert at relationshipexcellence.com, who specializes in men (and more importantly anger) about how to handle men and road rage.

1. Generally, says Williams, we’re all going so fast. So we’re not going to let a nameless, faceless person hold us back if they cut us of, even unintentionally.

2. He suggests that we don’t know the real reason behind people who are in the midst of a road rage tantrum, especially if there was no accident. “But I do know that if we yelled at our spouses like that, they’d leave us,” he says. (So I did do right by leaving!)

3.  Should I have yelled back? According to Williams, while it’s so tempting to meet anger with anger, it’s best not to. It’s like shooting the messenger, he says. Ask yourself what type of person do you want to be? The person who is screaming and holding up traffic? Or the person who finds their inner yoga calmness.

4. The road, for many men, is a place for ego, says Williams. “It’s possible he didn’t like the car you drive.”

5. He suggests if someone is losing it on you, you can’t stop them, so don’t bother. What he suggests is to walk away and “bless the guy,” because we don’t know what the real context of his anger his. (Perhaps he was just fired. Perhaps his wife just left him?)

6. Most of all, he says, don’t take it personally. “Men need to think they’re teaching someone a lesson.” (Men, then, I think should GROW UP!)

So angry road rage man. I bless you. I’m not taking it personally. I hope you have a better day today. As for me, I’m not driving anywhere today.