Pretty much every day for the past six years, I've worn something of my mother’s. It’s my way of continuing a conversation that ended far too soon. 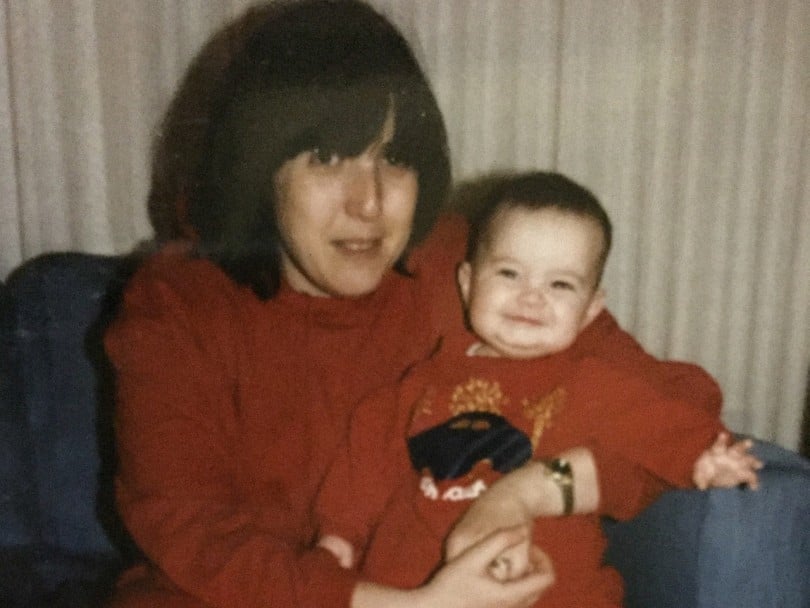 The author and his mother in matching red outfits. (Photo, courtesy Ben Waldman)

My mom and I had the exact same shoe size and, by the time I was 17, we were roughly the same height and shape—about one refrigerator high, and about half as wide. And although we had distinctly different styles—she was much more likely to wear a polka-dotted shirt than I—we shared an affinity for oversized hoodies, sweatpants, and polar fleece, and I often plucked hers from the laundry bin as November arrived. In Winnipeg, in the winter time, you needed to dress for the weather, and my mom’s body was invariably wrapped in clothing that ensured warmth, and with a profound willingness, she transferred that warmth to whomever she encountered through a hug.

She was a non-stop, one-stop problem-solving service who could look at any barricade and quickly devise a rational solution to get to the other side. Her wardrobe was equally competent, and fit for any situation. But in January that year, her sweatshirts were folded up and replaced by a hospital gown.

Something was wrong with her white blood cells, I remember my dad telling me. We didn’t yet know it was leukemia, but we all knew our lives were about to change. When I got to her ward, I found her sitting in bed, smiling, and she quickly told me everything would be fine; the only thing that would make her sad would be if I stopped doing what I loved—going to summer camp, playing sports, seeing films—on account of her illness.

She told me this wearing a pair of salt-and-pepper sweatpants. At the time, they fit her properly, with the appropriate amount of looseness, but as the chemotherapy dripped, her body withered, and as remission came and went, they got baggier and baggier. She wore those sweats when she got sick, when she got sicker, and when doctors knew she wouldn’t get better.


After my mom died, my dad sifted through her closet and extricated as much as he could, donating clothing to charity and community organizations, like the theatrical summer camp most of my family attended. My dad and his siblings went, and in the 1980s, my mom became the program director, a role my sister held for three summers. My parents’ first date was at camp, and most of the pictures of their early courtship were snapped on the grounds, many featuring their matching red-and-black lumberjackets. 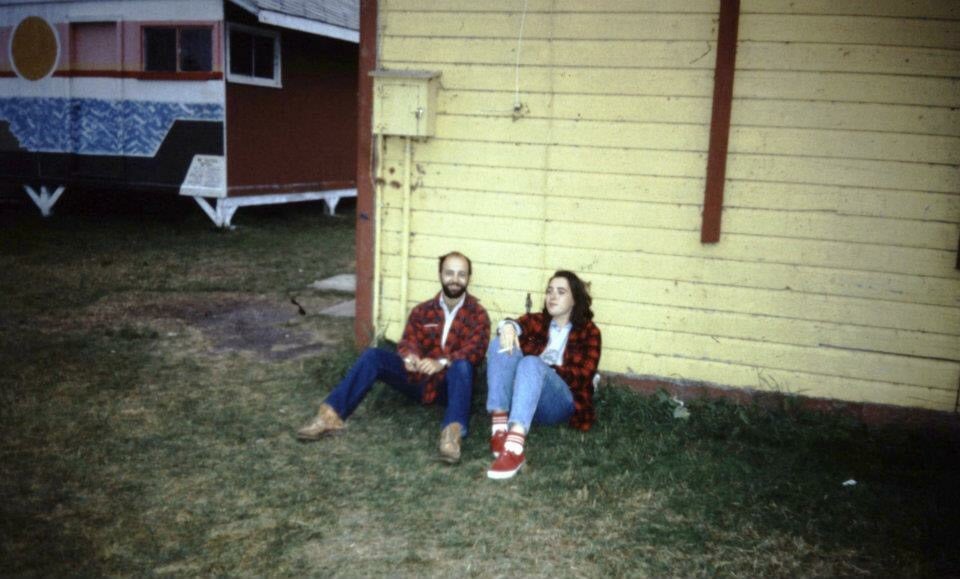 I don’t blame my dad for making the donations; he generally saw her clothes as items, not direct representations of the woman he loved. While she joked that black was her favourite colour, her wardrobe was flecked with bursts of flair: bright, yellow jumpsuits, blue smocks she wore while painting and drawing (she was a junior kindergarten teacher), and a floor-length lavender parka that made her resemble Barney in a snowstorm. Her clothes weren’t expensive, or fancy, but they were as she was: practical, covered in dog hair, and tinged with scents of smoke breaks, barbecue and laundry detergent—an aromatic trio that instantly brings me back to when her closet was full and her toothbrush sat in a cup by the bathroom sink.

Even though most of her wardrobe is gone, some signature pieces remain: the camp shirts and crewnecks (one of which I’m wearing right now), the lavender coat, the lumberjackets, the hoodies, and many of her size-11 shoes, which fit perfectly onto my men’s size-9.5 feet. When I go outside to play with our dogs, I slip on the woolly clogs she wore while tending the grill or answering a sensitive phone call. The leather sandals she wore most summer days have her toeprints embedded into their soles, and of course, my toes line up perfectly when I strap them on. 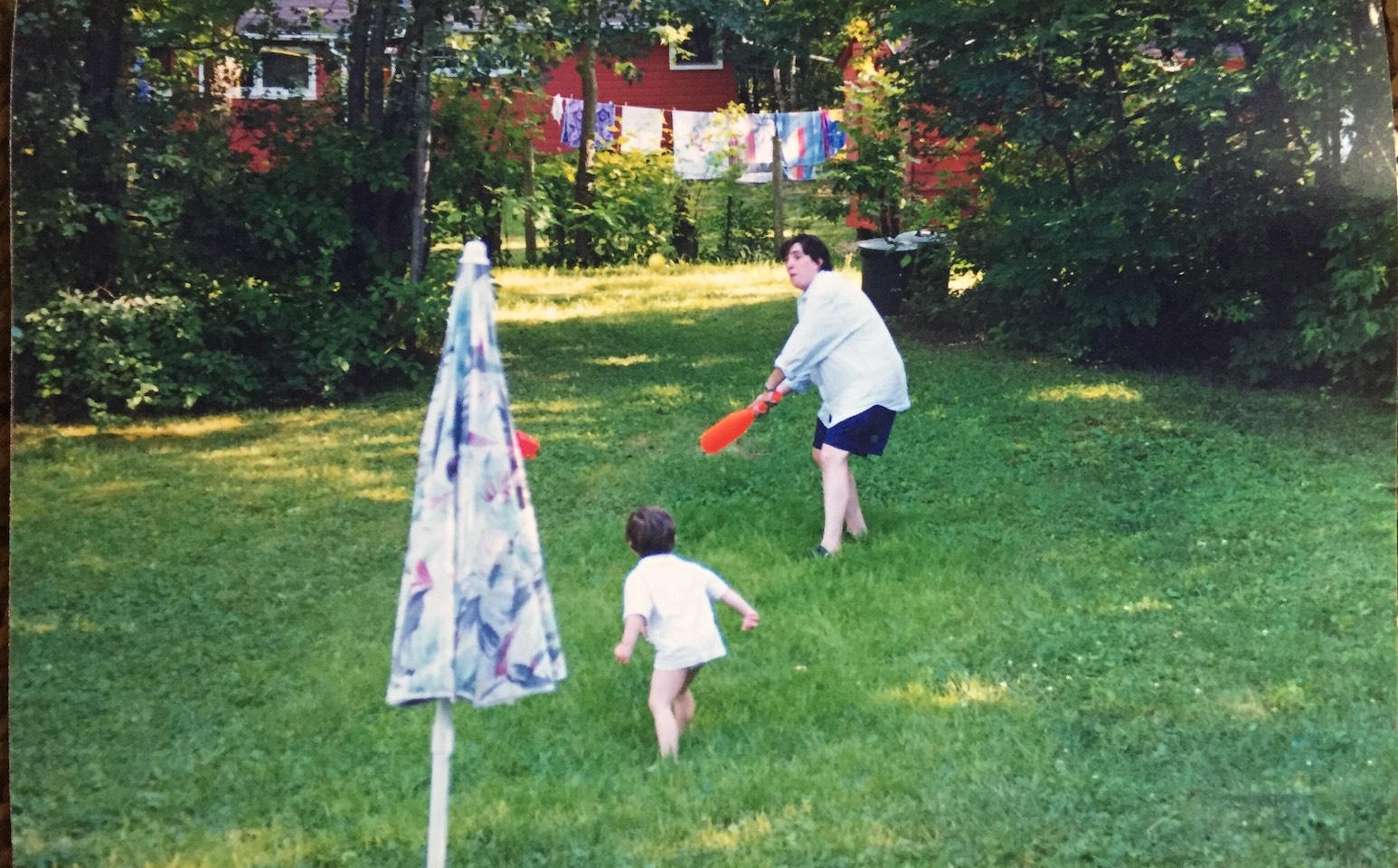 The author and his mother playing in the yard. (Photo, courtesy Ben Waldman)

I wear something of hers most days.

What does it mean when a 23-year-old man still wears his mom’s clothes whenever he can?

I’d wager I’m wearing my grief. In Judaic tradition, mourners wore sackcloth and ashes, rending their clothing to represent the torn fabric of their lives. Most Jewish people don’t tear their clothes nowadays, but many pin ripped fabric to their shirts. People wear black to funerals, perhaps because death feels undeserving of technicolour.

It also means I’m not ready to say goodbye—not completely, anyway. Wearing her clothes is my way of continuing a conversation that ended far too soon. It gives me an impetus to act as she acted, and to look at the world as I believe she saw it. It reminds me that she wanted me to continue to live, even if she couldn’t. 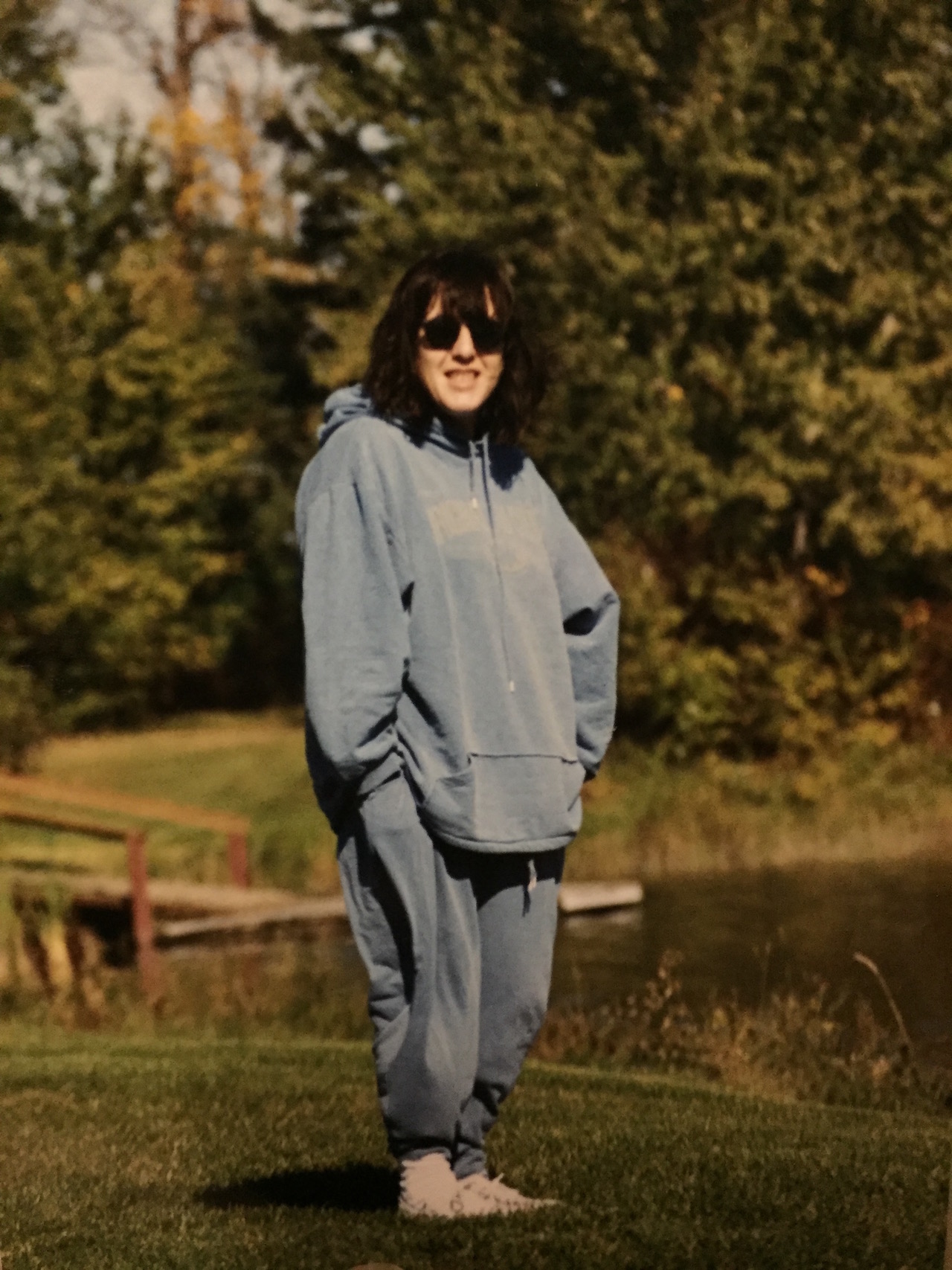 Clothes are many things: armour, camouflage, canvas. My mom’s clothes are a photo album, a soundtrack, a treasure. I wear them because I can’t bear not to, because they are what remains.

Ben Waldman is a journalist and writer in Winnipeg whose work has appeared in the Winnipeg Free Press, Maclean’s and Toronto Life.