Actress and writer Tamara Podemski’s second son, Benjamin, died after her C-section was wrongly downgraded at the hospital. 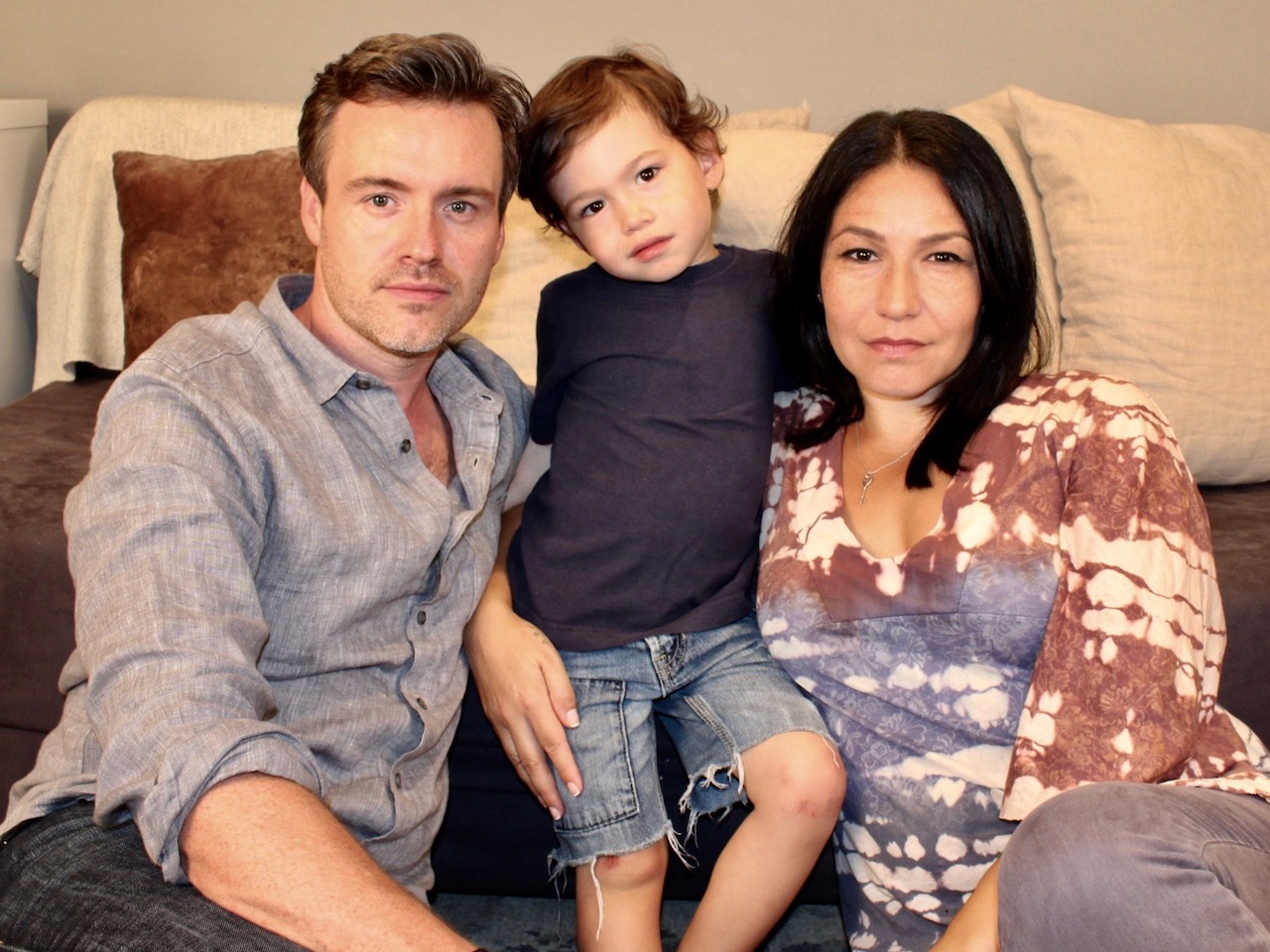 In May 2016, at a hospital in Bath, England, actress and writer Tamara Podemski’s second son, Benjamin, died five days after his birth. The case was national news in the U.K., and the inquest that followed led to regulatory procedures on C-sections to be amended in Britain, where Podemski and her husband, the British actor Jamie King, were then residing (they have since relocated to Toronto, Ont., to be closer to Podemski’s family). She spoke to Chatelaine about the experience and what losing Benjamin taught her about grief.

In 2010, I was living in Los Angeles when I met this incredibly charming Englishman at a party. After two years of long-distance dating it was like, “Okay, are we gonna do this?” We got married and decided we would set up shop in London. I was 35 and knew I wanted to start having babies right away. We got pregnant almost immediately.

We bought a house in an amazing little medieval village in the southwest of England called Frome. It was a magical, happy time. We’re both a bit hippyish, and we did a lot of alternative birth preparation practices. We decided we wanted a home birth and read every book that we could find. I felt so incredibly supported by the midwife-led system in the U.K. My Canadian friends would say, “What do you mean you don’t see a doctor?!” But we were very confident and happy.

My first son Oliver’s birth did not go to plan. I went into labour at 41 weeks, and after 25 hours I was rushed to hospital and given an emergency Caesarean section. Oliver was born with meconium in his lungs and had to be respirated for 20 minutes. We lived in the NICU for two weeks. It was pretty traumatic. Our feeling, after that, was that the hospital staff had saved Oliver’s life. Basically they were our heroes.

So when I got pregnant again a year later, we were happy to have the baby in hospital. We did not question anything we were told, which looking back on it, probably helped to lay the foundation for what later happened to our second son, Benjamin.

With my second pregnancy, I was told that having a VBAC (vaginal birth after Caesarean) was the safest and most natural way. When I asked about an elective C-section, the midwife said that if I wanted one I’d have to petition the hospital to say that the anxiety of going through another labour and vaginal birth would cause me harm. I’d definitely had a traumatic birth experience with Oliver, but that seemed a bit extreme. Also, I was attracted to the idea of having the natural birth experience I didn’t get the first time around.

I had a healthy pregnancy with no issues. We hit our due date, and then at term-plus-five-days we went to the hospital and had a bunch of tests, but nothing happened. Benjamin was big and he wasn’t budging. We were concerned about my age and the risks of a late baby, but the doctor said there was nothing to worry about. Then he booked us in to see him again at term-plus-15-days past our due date. He said we’d do a final scan then.

We celebrated that night because we believed there was nothing to worry about. Then, at 42 weeks we went to our local birth centre for a stretch and sweep and the midwife noticed a deceleration in his heartbeat. She was so concerned she sent us straight to hospital in an ambulance.

We were set up in a room to wait for our emergency C-section slot and watched Dirty Dancing to pass the time. There was no fetal monitoring but we weren’t worried. We thought, “We’re going to meet him today.” We felt totally supported.

Then a midwife came and told us our C-section had been dropped from a category 3 (emergency) to a category 4 (elective) and they were sending us back home. Jamie and I both became alarmed at this point and pleaded with them to do the procedure. The midwife said they needed the bed and someone else’s emergency had taken precedence over ours. We were distressed but they were very firm, assured that there was no risk, and sent us home.

That night I woke up in the early hours of the morning with a rock hard belly. It was an intense but painless contraction that went on for 20 minutes. I knew instantly that something wasn’t right and that my baby was in distress. So Jamie drove me at high speed to the hospital where I was admitted again. This time I was given an emergency C-section right away.

Baby Benjamin was born at 7 a.m. on May 5, 2016. According to my hospital notes he was born in “poor condition.” He was beautiful, absolutely physically perfect and huge at 9 pounds but he’d suffered brain damage due to oxygen deprivation. He was put on a respirator and taken directly to the NICU.

We were devastated, of course, but we were also angry because we felt in our hearts if they hadn’t sent us home the night before, he would have been delivered healthy.

And then, a ray of hope. As the anaesthetic was still wearing off from my C-section, two doctors appeared by my bedside and asked us if we wanted Benjamin to be put in a lottery for an experimental new treatment being trialled at another hospital, not far from Bath. The treatment was called “xenon gas inhalation” and it’s so expensive it’s run on a lottery system only.

We said yes — and amazingly, we won. The next day, doctors cooled Benjamin’s brain by a few degrees by making him inhale concentrated amounts of xenon gas. The treatment has been almost miraculous in halting the spread of brain damage due to asphyxiation in newborns. Suddenly we had hope again.

And at first, it was incredibly exciting, Benjamin seemed to respond well to the treatment. His MRI was really encouraging. But then he suffered multiple seizures. With each one, his brain health diminished. Once the treatment was over, he was given an MRI that showed severe damage across his entire brain.

We were given the choice of whether to take him off life support, and we asked the doctors, “What would life look like with a child with Benjamin’s degree of brain damage?” The doctors said they didn’t know because no parents they’d met had ever made that choice. So we took him off life support and prepared to let him go.

It’s a very strange thing taking your child off life support because you don’t actually know how long it’s going to take for them to go. In Benjamin’s case it took 8 hours.

The hospice room was large and nicely furnished. It looked more like a nice hotel suite than a hospital room. And Benjamin was so big and healthy-looking, he seemed almost like a normal sleeping newborn. I hadn’t slept in days and was still recovering from surgery, and at a certain point it all just started to feel weirdly normal, like the previous four days had been a dream. I said to Jamie, “It’s fine, it’s fine, he’s actually fine,” and I remember Jamie had to pull me out of the room to see the fluorescent-lit hospital corridor so I could remember what was really happening.

We asked the hospital staff if we could perform traditional Ojibwe death rites, which was obviously an unusual request in England. To the hospital’s credit, they brought in the fire marshal who stood with us on the roof as we smudged baby Benjamin with burning sage and sweetgrass brought over from Ontario. He died in our arms the next day.

The weeks after his death were the worst days I’ve ever lived. You feel like you’ll never feel joy or light again. I was going to say you feel like you’ll never feel love again but that’s not true because with grief, the pain is love. Grief isn’t something you get over — it’s something you just learn to live with. The weight of it never gets lighter, you just get stronger and more able to cope with it.

After Benjamin’s death we were told the hospital would not release his body for a while. An autopsy would be performed as part of a coroner’s inquest into Benjamin’s death. It found that Benjamin almost certainly would have been born healthy if I’d undergone the emergency Caesarean section I was originally scheduled for. Basically we shouldn’t have been sent home from hospital that night.

British hospital regulatory procedures on births and C-sections have been amended due to the findings of Benjamin’s inquest, which is gratifying. It’s now more difficult to send home a pregnant woman at full term. And there have been measures put in place to prevent emergency C-sections being wrongly downgraded.

What we’ve always wanted most is an acknowledgement from the people directly involved that mistakes were made and that, sadly, hasn’t happened.

We haven’t had a funeral or a burial for Benjamin yet because we’re just not ready. In the meantime, we’re telling our story in the hope that other, similar tragedies can be prevented. We want to seek some justice for Benjamin himself, because his death was preventable.

We want to tell pregnant couples to trust their own instincts and to be skeptical. Don’t be afraid to question authority. But we also want people to know that when you do lose your child you have to give yourself the time and space to grieve.

Childbirth is a miracle. Sometimes you bring your baby home, sometimes you live in the NICU for a while, and sometimes you leave with empty arms. That’s just how it is. All we can do is equip ourselves with knowledge, take precautions, follow a gut feeling or just have faith. But if your story ends with a broken heart, take good care of yourself. That’s what Benjamin taught us.

Grief asks for our attention. It wants time and energy. When we give that to ourselves, we can get through it. When we avoid it, it turns on us. Part of mothering a child “on the other side” is loving yourself, fiercely. I am more kind and compassionate to myself than I have ever been in my life. That self-love has allowed me to fall to my knees in tears, let it all out, and then continue on with my day. For that lesson, I am grateful.

It’s not just about preventing further tragedies but also about talking about how you live with it.

Tamara Podemski is currently working as a writer on the second season of APTN’s Future History and has a role in the feature film Never Saw It Coming, due out later this year.