For years, I’ve told myself not to let those words bother me. But they do. And why shouldn’t they? The only place I’m from is Saskatoon. 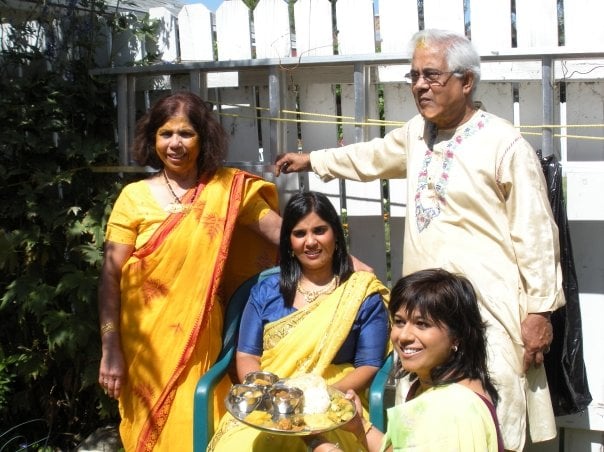 Pembina Crescent in Saskatoon’s north end is a great street. It inclines from the banks of the South Saskatchewan River into the heart of the neighbourhood I grew up in. My parents still live there—in the same house for 45 years now.

Pembina has a lot of really great homes. And I’m sure, inside them, a lot of great people. But I don’t feel so great being on that street, even now when I return to the city in which I was born and lived for 23 years.

Because what happened to me on Pembina Crescent is something I’d rather forget, but just can’t. It was there that—for the first time in my 46 years—I was told, “Go back to where you came from.” It wouldn’t be the last.

The thing about hearing that phrase directed at you is that you remember every exacting detail. Where you were, who said it, the sound of their voice, the look on their face. It’s almost like it encodes itself deep inside your body.

And every time you hear that phrase directed at someone else, it takes you back to your own lived experience. As it did again this week, after United States President Donald Trump suggested four American Congresswomen of colour, three of whom were born in the U.S., should “go back” to the “totally broken and crime infested places from which they came.”

I was an eight-year-old when the “Pembina incident” happened. It was late afternoon on a warm day. I was walking with my best friend at the time, who is white. She was on my right. A few cars passed by us from behind. Then, as another was approaching the peak of the hill, a guy leaned out of the passenger side window and yelled, “Go back to where you came from.”

Nearly four decades later, I can still picture the look he had on his face.

I was wearing a bright red T-shirt. I remember that, because as soon as those words struck me, my eyes cast downwards to look at myself. Is he saying that to me?, I foolishly wondered. But I’m from Saskatoon. I was born here! I shouldn’t have worn this shirt—it makes me stand out.

My friend said nothing. Neither did I. And we carried on our way—which was a huge relief. Because all I knew as an eight-year-old was that what that guy yelled made me feel something I’d never felt before, and it certainly didn’t feel good. And I just knew I never wanted to feel that way again.

But I would again, and again. Not often, but at the same time, often enough. And certainly, far too often for my liking.

There was the time in my 20s when I’d moved to Toronto for journalism school. I was alone, standing on the subway platform when I heard a voice close in behind me muttering various names of predominantly non-white countries: “Guyana, Trinidad, Pakistan.” He went on with his list.

“Sorry?” I turned around and asked

“Where you from?” he retorted.

I said nothing. An eternal second of silence came between us.

“Go back to where you came from.”

I sneered at him: “Saskatoon.” And turned back around. And that was it.

I may as well have been wearing that red T-shirt again. Yes, I was years older. But I felt all the same hurt, anger and disappointment—just in the adult version of me.

And I did again, in my 30s when I was back home in Saskatoon for my bridal engagement party. My mom and I—both wearing saris for the occasion—were crossing a street downtown when a guy walked past and, bam: “Go back to where you fucking came from.”

Perhaps it was the interloping curse word that helped set me off.

But what really did it was the hurt and fear on my mom’s face as I turned on my heel and started hurrying after him.

“I’m from fucking Saskatoon,” I yelled. “Born and bred. Where the fuck are you from? How dare you say that? Get back here and say that to my face!”

He never did. He just went on his way. And I walked back to my mom.

“Piya, don’t do that. He could have hit you,” she said. “I’ve been living in Canada for most of my life. Some people say things like that. Don’t let it bug you. It doesn’t matter.”

My mom and I never spoke of it again.

But it does matter. It matters because that phrase is said to someone each and every day. Not only in other countries, but here in ours, too. I know that’s true: People said it to me again just days ago, when, prompted by Trump’s comments, I posted about it on Twitter, writing ‘I remember…every time someone told me to go “back where I came from.” This stuff embeds itself in you.’ Yes, some of the replies were by trolls. But trolls are people, too.

And you know it’s true, too, just by reading the often xenophobic comments on any news story about racial identity in Canada. Or just ask the millions of non-white people who call this country home about it.

I have received hundreds of meaningful, supportive responses from Canadians across this country since I tweeted about my experience. And I thank them for it. It has provided a little salve.

People have said, “I’m sorry this has happened to you.” Others have told me that those people are just jerks. That it’s not who we are as Canadians. That I AM Canadian. That they’re glad I’m here. To get over it. And well-intentioned people have told me not to let it bother me.

For years, I’ve told myself not to let those words bother me. But they do. And why shouldn’t they? The only place I’m from is Saskatoon. But I can assure you that, no one who has ever told me to “go back to where I’m from” is suggesting Saskatoon. To hear those words cast my way is akin to being told I don’t belong. I’m unwanted. I’m not good enough to be the only thing I’ve ever been—Canadian.

So yeah, it bothers me.

While reflecting on all this, this past week, I asked a close friend and my husband—both of whom are white—about paper cuts. Could they remember, among all the paper cuts they’ve had in life, the ones that cut deepest? The ones that hurt more than they should have, and more than they wanted them to, despite a paper cut being such a relatively tiny wound? Each not only remembered, but could show me the exact spot of the cut on their hand.

Isn’t it perplexing that something so seemingly small can hurt so much and embed itself in your memory?

That’s what being told to go back to where you come from feels like, to me. It’s a tiny wound not to your hand, but to who you are at your core. It cuts your confidence, your sense of belonging. It hurts more than it should, and certainly more than I want it to.

And I wish I could just forget about it. But I can’t.

—
Piya Chattopadhyay is the host of CBC Radio’s Out in the Open, and regular Friday host of The Current.