After My Divorce, I Was Ready To Get Out There. But Online Dating Utterly Terrified Me

I was completely unprepared for the shark-infested waters of online dating. I needed a crash course in modern love. 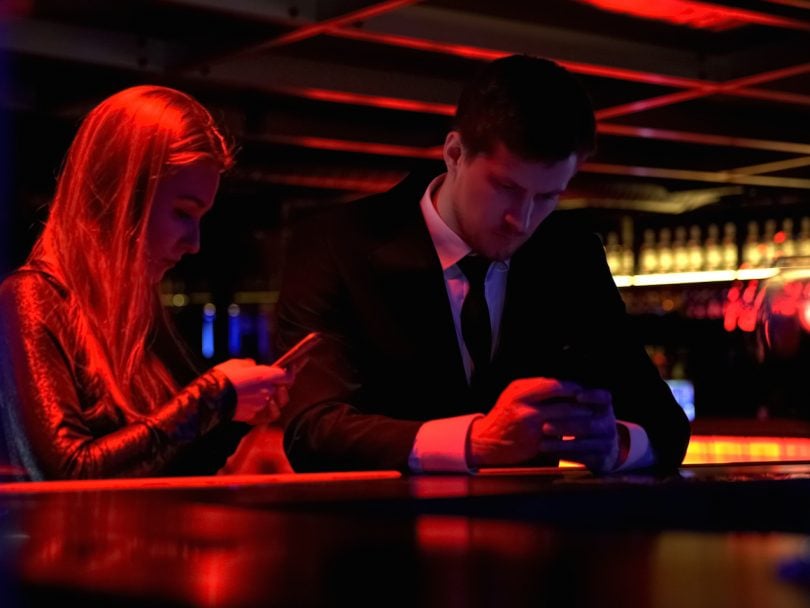 Dating in your mid-thirties after a long relationship is like playing Tetris with round pieces; you can achieve some kind of structure, but it’s wobbly at the best of times.

I’d never met anyone on the internet. At 15, my first “real” boyfriend started out as a “phone boyfriend”—a cordless handset was my gateway to him (a mutual friend had set us up). I met the guys who followed him through real-life channels, too: at high school, at a concert, at a 1950s-themed dance. He was the one that stuck—the ’50s dance guy and I were married, and we were going to be married forever.

But three years ago, when my “forever” turned into a mere eight years, I felt like a squid out of water. Life had brought me two little boys and singledom, so what was I supposed to do when I felt ready to share my life with someone again? I had no idea how this world worked. And I had no idea what I wanted, or even what I wanted to be different this time around.

After all those years of cozy monogamy, I was ill-informed and unprepared. The internet was a place I went to the way I used to crack the spine of an encyclopaedia. It could answer pretty much any question, but I’d never dare ask, “Siri, find me a boyfriend who is employed, kind and lives in close proximity.”

Within 48 hours of treading the shark-infested waters of dating apps and websites, I encountered so many poorly cropped photos (from which ex-spouses and kids had been freshly excised) and shots of men holding antlers attached to still-bloody severed heads. Entire sentences were communicated in emojis—a language I couldn’t speak. Swiping through profiles was like a never-ending Marie Kondo-ing of my closet.

It was so excruciating and overwhelming that I promptly deleted all the apps. I needed to learn about this strange world I was getting myself into in a way that felt less terrifying. I decided I would observe the dating scene from a safe distance.

My field research started with a lot of casual but intentional people-watching whenever I was out with friends. Were people in pairs actually on dates? Did they know each other? Would this be the night they realized they were meant for each other? Or were these people married for a long time and somehow still managed to seem interested in each other? After so many years of trying to make my own marriage work, I realized I had almost no grip on dynamics.

I’d get lost in what I thought peoples’ stories could be. I’d wonder how they met—did they work in the same building and had seen each other in line for coffee every day for a year before one of them finally worked up the nerve to ask the other out? Or did he “slide into her DM’s” and tell her he thought she was pretty, and they took it from there? It was really hard to read most couples. But then there were some that were so transparent you could see through to their inevitable end.

One example was the “phone people.” The pairs—who paid more attention to their phones than to the person across the table, faces bathed in blue light. What were they doing, honestly? I tried to convince myself they were playing each other in online Boggle. What was so important that it couldn’t wait? Was the Nikkei trading at a 20-month low? What was it that was compelling enough to pick the phone up and stare at it while someone sat across from you—presumably there to talk to you?

I once saw a girl excuse herself from what was very obviously a date to use the washroom (recognizing the first date dynamic—equal parts excitement, awkwardness and complacency—was a skill I had mostly mastered). In the reflection of the framed artwork behind her date, I could see him on Tinder, swiping away. And it reminded me of one rare night when my ex and I had been able to get out for dinner. We were sitting next to what was very obviously a first date, laughing as we eavesdropped on the awkwardness that we’d long left behind and I leaned in a little closer and whispered “I’m so glad we’ll never have to date again” part flirtatiously and part thankful that when we’d met, there weren’t smartphones. I’d come full circle—the married first-date observer had become the divorced first-date observer, and potentially the first date participant.

While I was never able to find out the end result for many of these couples I eavesdropped on, it was strangely helpful to imagine what was, or was going to be. My research helped me to get excited what my next (and hopefully last) relationship might be like.

With my limited time to commit to this new dating world, I decided I would do as the kids say, and meet someone “IRL.” To streamline that process, I developed a sort of roster of first-date questions, most of which I planned to also ask on an impending second date I had coming. That might sound silly, but I didn’t want to waste time, either. I wasn’t 20 anymore, and much of my time was spent with my kids. I didn’t want to date someone for five years only to realize that they didn’t even like children.

The roster included questions I’d collected through my career as a family law clerk—What is the worst thing your ex could say about you? And if the answer wasn’t, “I cheated on them,” the follow-up question would be “Did you ever cheat on them?” I’d also ask whether they a) liked kids? Or b) wanted any more?

When I finally had a portfolio of questions and a capsule wardrobe of date outfits grouped by activity genre, I was ready to hop in with both feet, very gently and quietly. I had been on one first (blind!) date that a friend set me up on that had paved the way for a second. I had gone on the first date unarmed—without my list of interview questions—and I was intent on making the next date more organized.

I planned to go to Date Two with my list of questions committed to memory because how weird would it be if I was like “excuse me for a moment, I need to pull up this list of pre-planned questions on my phone that I’d like to ask you now”? (Plus, in my research, I had realized just how glued to my phone I had become—not much better than those “phone people”). I was still scared and anxious. But the idea of cuddling up to someone other than my cat was more attractive than any potential for failure.

Knowing my first “first date” had gone well enough to produce a second one was somewhat comforting—I was still capable of being intriguing enough, I guess, for someone to make the time. I also took comfort in the fact we wouldn’t have that awkward phenomenon I’d heard about with online dating apps, where you’d match with someone, have a super awkward date or encounter, and then virtually bump into them again, having been re-matched by some algorithm that was sure you belonged together.

That relief lingered comfortably until we awkwardly bumped into each other during a street festival a few days before our second date.

I was helping my younger son play a game where you burst balloons with darts while trying to keep the older one from running away when a big dog brushed by me, unexpectedly. I pet it on the head and when I looked up, a little girl was giggling. Immediately behind her was another dog and a man and woman. Holding hands.

The same man I was meeting in a few days for Date Two.

I pulled out my iPhone and added “do you have any siblings, but specifically a sister?” to my questions roster, but then ruminated on it for the remaining days leading up to the date. You see, hopelessly monogamous me hadn’t yet become acquainted with the terms “dating openly” or “seeing other people.” Instantly and utterly deflated, I realized I had a lot more to learn.

My people-watching had given me a good base of knowledge. But there is no fool-proof way to guard against further disappointment or heartbreak‚ not even in this swipe-able, delete-able, Google-y world of dating. If I wanted to see what was out there, I was going to have to close my eyes and jump in. I was going to have to prepare myself for the unexpected.

Charlotte Schwartz is a mother of four in a blended family—the kids range from 9 to newborn. She blogs regularly at Running on Borrowed Legs and tries to fit the odd marathon in here and there.