From child actor to Private Practice star, the Canadian shares the various jobs she's had in between, and what she's learned along the way. 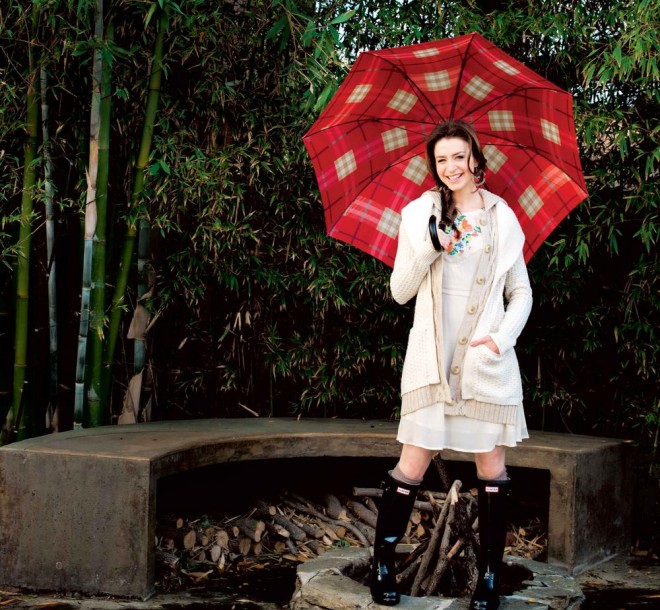 With her perfectly curled hair tumbling over her defined triceps, Private Practice star Caterina Scorsone looks every inch the celebrity. But she’s actually refreshingly relaxed and friendly, and that’s despite having just returned from her first cooking lesson on live TV (with Nigella Lawson as the teacher). Caterina is used to delivering: She worked as a midwife’s assistant when she first moved to L.A. and even helped out during her niece’s birth. “It was amazingly transformative,” she says of the experience before joking, “And I knew I’d be a terrible waitress!”

Although she made her acting debut on Mr. Dressup at eight, and her sister Francesca was also a child actor, Caterina’s not from a showbiz-obsessed family. (Francesca is now a chaplain in the armed forces.) Growing up as the middle child of five siblings, Caterina says, “was a cross between the von Trapp family and Lord of the Flies. There was lots of love and singing, and then moments of absolute mania.” Her father is executive director of the Good Neighbours’ Club, a charity that provides respite for elderly men who suffer from addiction or mental-health issues, and her mother is a social anthropologist. “We’re really lucky. They raised us to believe that what will make us happiest is to find a way to use this life to inspire, love and help others,” she says.

This is likely partly why at 19, despite having earned a Gemini nomination for the TV series Power Play and acted alongside Ed Harris in The Third Miracle, Caterina found herself questioning acting as a career. “I had this sense that if you wanted to help people, you needed to be working in a soup kitchen or building an orphanage,” she says. She stepped out of the spotlight, got a degree in literary studies from the University of  Toronto and had an epiphany: “I realized that as an actor, you have an opportunity through telling a story to inspire empathy in others and to help people understand themselves.”

Caterina returned to the small screen and went on to score a second Gemini nomination for her lead role in the 2009 miniseries Alice. So strong was her passion—and the support from her husband-to-be—that when filming coincided with her wedding day, she took the red-eye from Vancouver to her own ceremony. (She married Rob Giles, of the L.A. pop-rock band the Rescues, in Toronto in June 2009.)
After a cameo on Grey’s Anatomy as McDreamy’s blunt kid sister, Amelia Shepherd, she now plays the ex-addict neurosurgeon on the show’s spinoff, Private Practice. Caterina says she still helps out at her dad’s charity, though: “Especially now that I’m playing a character who suffers from mental-health issues. I’m excited to help in any way possible and get the word out there.”

My guiltiest pleasure is…a Harry Potter movie marathon, with a box of Panda licorice and a cup of tea.

I wish I had more time for…international adventuring. I love stepping off a plane and walking around seeing things I’ve never seen before.

In my car I listen to…hip hop—I love it. Rhyming makes me laugh.

My favourite moment of the day is…whichever moment I take the time
to notice and appreciate.

In my fridge you’ll find…blueberries and takeout.

The glass is…overflowing and spilling on my pants.