Prince Harry Interviewed Barack Obama, And It Was Delightful

There are only a handful of individuals that could make people climb out of their comfy holiday stupor. And few combinations other than Prince Harry interviewing former U.S. President Barack Obama could suddenly make all those people very interested in downloading a BBC podcast centring around “key policy makers.”

The pair’s conversation took place in a simpler, pre-Meghan-Markle-engagement era — back in September when they were both in Toronto for the Invictus Games. (Meaning: before the current “controversy” swirling around whether Obama will be invited to the royal nuptials. But, the prince did address the issue in a live segment with BBC hosts to promote the interview, saying that the invite list had not been put together yet.)

The prince and politician chatted with ease in the interview for Today — a BBC Four radio program guest edited by Harry — about Obama’s life post-presidency, how to harness the power of youth in politics and, believe or not, the Kardashians.

Here are some highlights:

Obama is as basic as everyone else

He may be a former president, brilliant negotiator and master orator, but he still just wants extra time to eat brekkie. “I could spend an extra 45 minutes talking to Michelle or having a long breakfast,” he said, reflecting on what it means to be released from a packed schedule. But there are still things he misses about being president: “I didn’t use to experience traffic. I used to cause traffic.”

Obama expressed concern over the divisive nature of online conversations, particularly the danger that people are “cocooned in information that reinforces their current biases.” But he was careful not to lay blame. Instead, he encouraged people to take their online discussions offline: “The truth is, on the internet everything is simplified, but when you meet people face to face, it turns out it is complicated.”

When asked about what was on his mind on Donald Trump’s inauguration day in January, Obama took the opportunity to praise his partner.

“The first thing that went through my mind was, sitting across from Michelle, how thankful I was that she had been my partner through that process,” he said. “She is a spectacular, funny, warm person. She is not someone who was naturally inclined to politics, so despite the fact that she was as good of a first lady as there’s ever been, she did this largely in support of my decision to run. And for us to be able to come out of that intact — our marriage was strong, we’re still each other’s best friends, our daughters turning into amazing young women — the sense that there was a completion and that we had done the work that preserve our integrity and left us whole and that we hadn’t fundamental changed, that was a satisfying feeling.”

Here is a sneak preview of when @barackobama met Prince Harry for the interview. Listen to the full interview on 27th December on @bbcnews Radio 4 Today programme.

In the lightning round, when Harry presented two options — asking the former president to choose the first that came to his mind — Obama did not fall into a trap when asked “Kim or Khloe?”

Instead, he expertly sidestepped, and when asked “Harry or William?” he quipped: “William, right now.”

But with others, he remains a very smooth diplomat

And, when Prince Harry asked the former president to choose between Suits or The Good Wife? 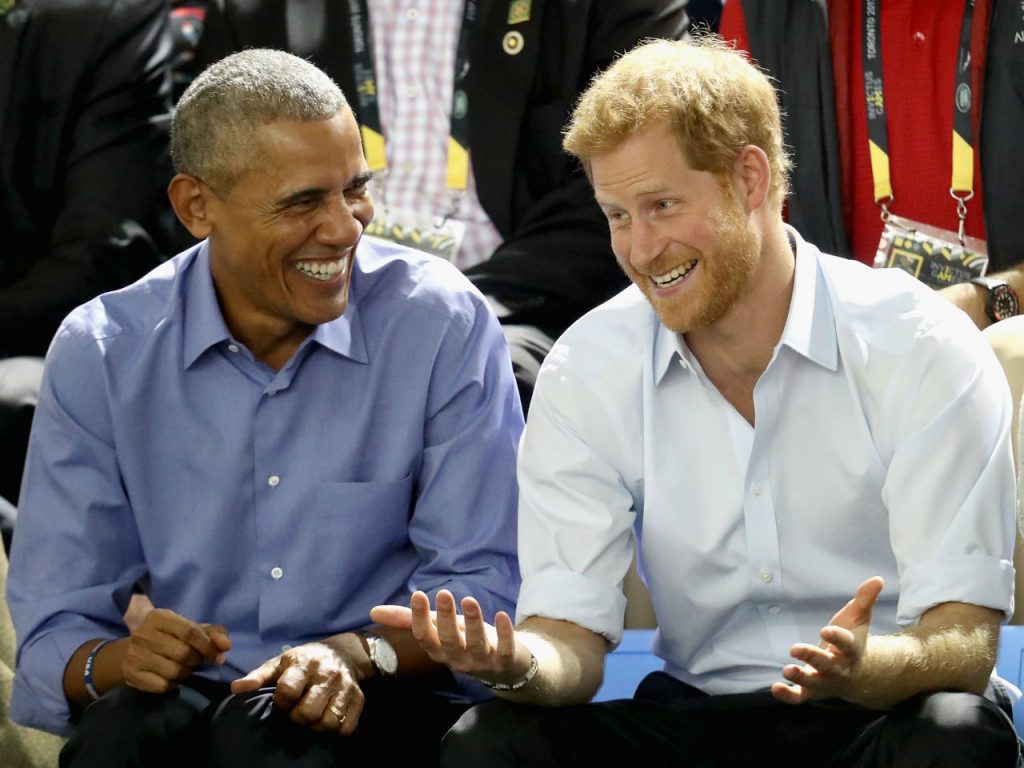 Former U.S. President Barack Obama and Prince Harry share a joke as they watch wheelchair basketball on day 7 of the Invictus Games 2017 on September 29, 2017 in Toronto. (Chris Jackson / Getty Images for the Invictus Games Foundation )