Why Sex Workers Are Suing the Canadian Government—Again

Current sex work laws in Canada make it impossible for sex workers to make a living without discrimination. 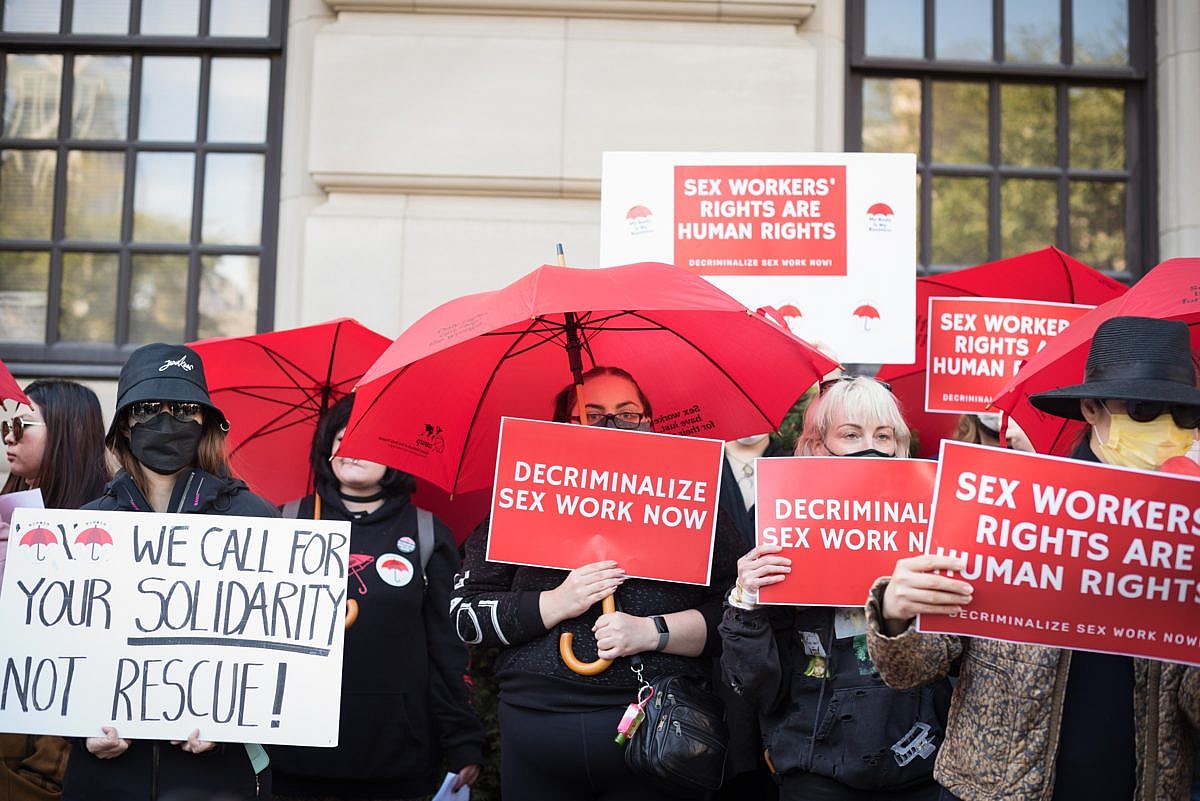 For more than a decade, Jane Li supported her family through sex work. Once she retired, Li helped other sex workers with administrative tasks—answering the phone, setting up dates, posting advertisements. But most importantly, she helped them reject rude or dangerous clients. Until several years ago, that is, when Li was arrested and charged for sex work-related crimes. The sex workers she was helping were either deported or forced to stop working, while Li was put in prison.

“The police took my phone and all my money. I have lost my apartment and became homeless without income. I can’t even afford to pay for my food,” Li says. “I do not force anyone to work. I do not exploit anyone. There are so many nights I want to end my life because of this injustice.”

Li is not alone. Her experience encapsulates why a group of sex workers are suing the Canadian government (again) over the laws that criminalize their work. The Canadian Alliance for Sex Work Law Reform and six individual applicants are challenging Canada’s sex work-specific criminal offences and are seeking to strike them down on the basis that they violate sex workers’ constitutional rights.

Earlier this fall, the Alliance, which is made up of 25 sex worker rights groups from across Canada, argued in the Ontario Superior Court that the Protection of Communities and Exploited Persons Act (PCEPA)—which is the current legislation on sex work—subjects sex workers to targeted violence, harassment, police profiling, surveillance and arrest.

PCEPA criminalizes most aspects of sex work—including communicating to obtain sexual services, placing advertisements, renting work space to sex workers, working for sex workers, and managing or hiring sex workers. While these provisions are in place, sex workers will continue to be criminalized for their work.

Yes. In 2007, Terri-Jean Bedford, Valerie Scott and Amy Lebovitch took the Canadian government to court to challenge three sex-work related criminal offenses, also on the basis that the laws violated their constitutional rights. After the case wound its way through the courts for years, the Supreme Court of Canada issued a unanimous judgment in 2013 that the laws under consideration contravened sex workers’ right to liberty and security. The justices ordered the Stephen Harper government strike down the three criminal offenses, and gave parliament one year to enact the changes.

In 2014, the Harper Conservatives did as ordered and struck down those laws—but they then introduced a new set of provisions that simply reintroduced criminal penalties against sex work. Known as PCEPA, the new laws, in theory, meant that sex workers could not be charged for selling sexual services, but instead made purchasing those services illegal. The underlying idea of these laws is that sex work is inherently exploitative and violent—rather than a form of labour deserving of labour law protections—and is influenced by what is called the Nordic Model, due its use in Scandanavian countries.

The Nordic Model, also known as the End Demand Model, claims to immunize sex workers from prosecution and protect them from abuse. But in reality, sex workers are still criminalized under PCEPA for providing helpful services to other sex workers such as booking appointments, providing a workspace, or translation, driving or advertising. Even providing sex workers with vital assistance like taking down licence plate numbers and client descriptions to make sure that the client is not a known abuser is an offence.

Under PCEPA, it is impossible to provide sex work services without breaking a law. So, to claim that the current laws shield sex workers from conviction is misleading.

Why are sex workers in court again?

Recent research from the Centre for Gender and Sexual Health Equity has revealed that since the implementation of PCEPA, sex workers have faced higher levels of violence, reduced access to sexual health information, outreach services and condoms and a reduced ability to negotiate sexual services and screen out bad clients when compared to pre-PCEPA rates.

Criminalization as it stands in Canada still harms sex workers. At Toronto’s Butterfly, an Asian and migrant sex workers support network that has documented multiple instances where migrant sex workers have been evicted, extorted by landlords, arrested and jailed, deported, turned away from support services, had all of their savings seized by the police and had their children turn on them due to the stigma in being branded as “criminals”—whether or not they are ever charged with sex work offences. This is why sex workers are back in court.

How is this case different from the 2007 Bedford case?

The current constitutional challenge against PCEPA is different from the Bedford case in a number of important ways. First—thanks to the Canadian Alliance on Sex Work Law Reform that was founded in 2012—sex workers are more organized than they were in 2013. With greater national organization came political advocacy that was more broadly representative and intersectional.

Which leads to the second difference between the PCEPA and the Bedford case: the rise of intersectionality—a concept that recognizes that people experience discrimination differently based on multiple, overlapping social identities. As Black and Indigenous 2Spirit trans woman Monica Forrester stated in her affidavit to the court: “For myself and other Indigenous sex workers, the PCEPA is an extension of colonial laws used to control us based on who we are and what we do for work.”

As well, a wide range of human, racial and migrant justice organizations are supporting sex workers in this current challenge as intervenors—including the Black Legal Advocacy Clinic, the Migrant Workers Alliance for Change, the Ontario Coalition of Rape Crisis Centres and Amnesty International.

Third, the Bedford case established the bare minimum: that sex workers had a constitutional right to “security”—that is, a right to be protected against violence and death. But the case against PCEPA is much broader, with sex workers arguing that the criminalization of sex work discriminates against cisgender and transgender women and non-binary people while demanding the right to safety, security, life and personal and sexual autonomy.

The fight against PCEPA is a vital next step in defending the lives and dignity of sex workers. But it will take more than the courts to transform sex workers lives. It will take solidarity from a society that recognizes every sex worker’s life is worth fighting for.