Rushed decisions, overstretched hospitals and a scramble for vaccines: how the Doug Ford government fumbled its way into the province’s third wave. 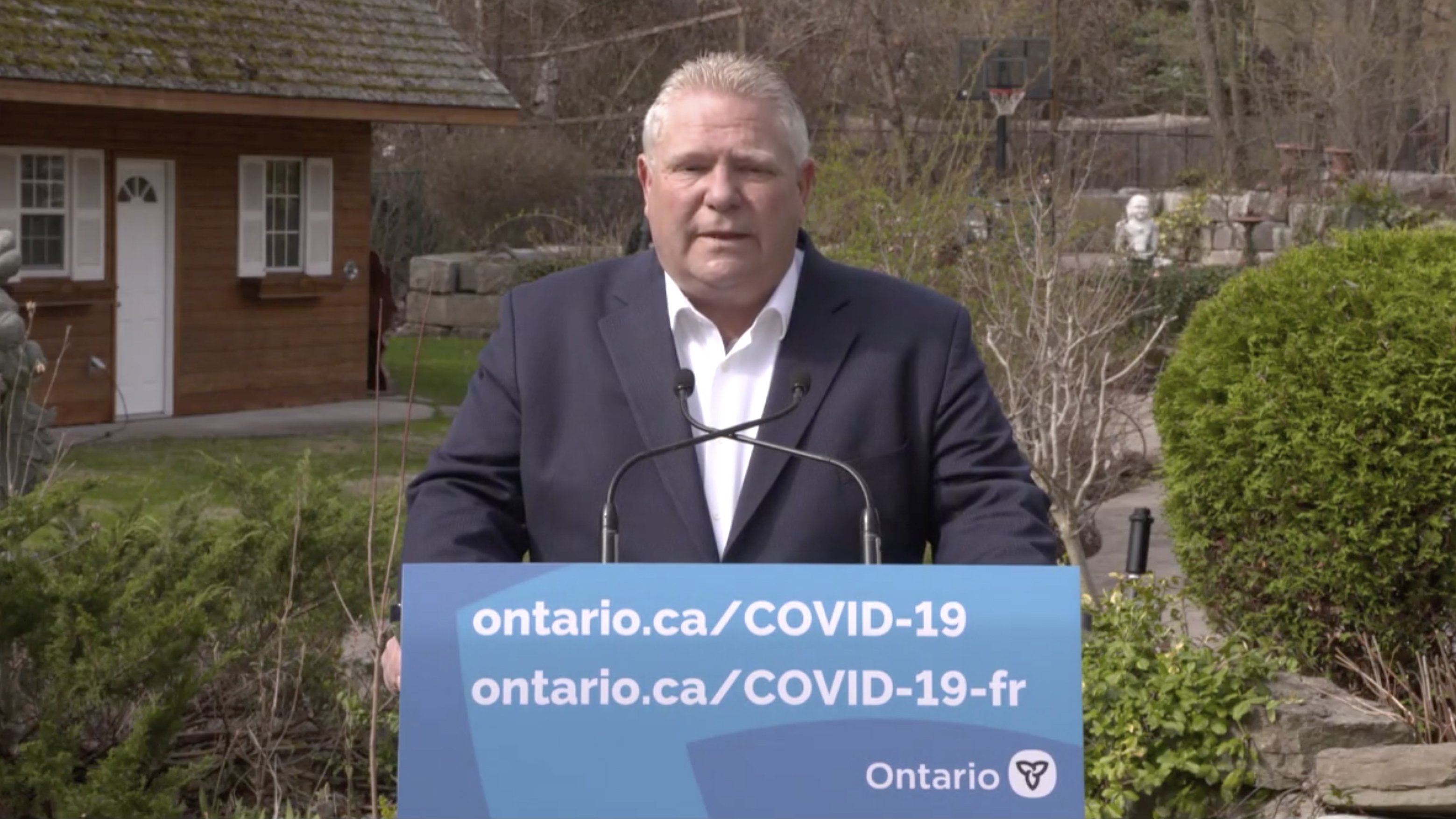 On February 11, one of Ontario’s top doctors gave us a bleak picture of the province’s COVID future.

“Am I missing something here—or is this presentation actually predicting a disaster?” TVO’s John Michael McGrath asked Dr. Brown.

Brown took off his mask and seemed to take a quick deep breath before saying “No, I don’t think you’re missing anything.”

Five days later, on February 16, the Ontario government lifted the stay-at-home order in 27 out of 34 regions—Toronto, Peel, York and North Bay stayed in lockdown—and returned to a confusing, colour-coded system where red means open and grey means closed. Premier Doug Ford defended the decision that was contrary to the data. “We aren’t reopening the province,” he said. “We’re transitioning. We’re transitioning into the framework that was laid out by the health team … and we won’t hesitate to pull on the brakes at any given time.”

Here are the decisions—and the backtracking—the province made heading into and throughout the third wave:

March 11: The provincial government implemented its first so-called “emergency brake” in Sudbury after seeing a rapid rise in case rates.This was the first pull back after the stay-at-home order was lifted.

So, here we are: Ontario’s Third Wave. This isn’t a model.. Blue line is overall SARS-CoV2 spread; Orange line is VOCs — now almost half of the pandemic and driving the growth. (The two lines are now parallel). #COVID19Ontario https://t.co/U6F16usw2A pic.twitter.com/i8hcod9XAo

March 16: Ontario’s COVID-19 science table made it official in a tweet: “So, here we are: Ontario’s Third Wave. This isn’t a model.” A graph with two lines, one showing general COVID spread and the other numbers of variants, were increasing in parallel. Ontario’s ICUs had been full since January and remained stretched thin.

April 1: Williams, despite the rising numbers, stood by the decision to lift restrictions, and when asked if all this was a failure in policy-making, he said “I don’t agree it’s a failure.” Modelling released by the COVID-19 Science Advisory Table on the same day indicated that even with a stay-at-home order, the province could see up to 800 COVID-19 patients in ICUs by the end of April. Hospitalizations were 20 percent higher than what they were in December and the patients were younger and suffering from the more deadly new variants.

Dr. Michael Warner walks us through the story of one patient.

A woman in her 40s who got Covid. Earlier today he fought to save her life.

But before the day ended Covid stole her from us.

Please listen to @drmwarner share his anger and heartbreak. pic.twitter.com/LzreBOxwrS

April 3: Dr. Michael Warner, director of critical care at Michael Garron hospital in Toronto, told the CBC about a patient who died, a mother of five in her 40s whose husband went to work despite a declared outbreak in a previous shift. “I’ve never had a patient so close to death in my career,” he said. “It took five doctors, 17 people yesterday to keep her alive.” She died a few hours after his interview—spurring a conversation about paid sick leave in the province.

April 5: Peel Public Health used powers granted to their medical officer of health, known as a Section 22 order, to order all schools in Brampton, Mississauga and Caledon to close for at least two weeks and move online, calling it a “necessary step to protect staff and students” in the wake of rising case counts. 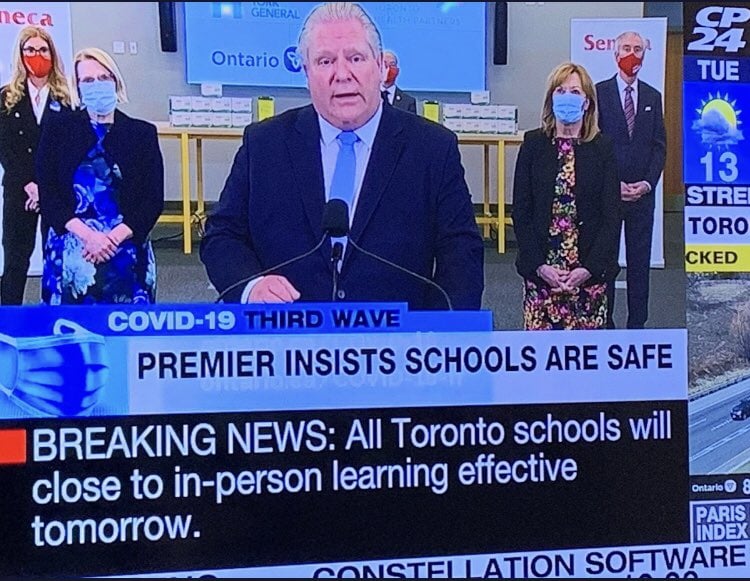 This screenshot from CP24 made the social media rounds on April 26.

April 6: Ford reiterates that schools are safe and that the problem was “when kids go back into the community.” Right after Ford’s press conference, the Toronto Public Health made the executive decision to move all classes online.

April 7: The Ontario government declared its third state of emergency during the pandemic, and once again implemented a 28-day provincewide stay-at-home order. “I can’t stress this enough. Things are extremely, extremely serious right now. And I’m extremely concerned,” Ford said, adding that he took the decision as soon as he found out that there were more than 500 COVID-19 patients in ICUs.

As part of its response, the government released a list of hotspot neighbourhoods where those aged 18 and older would be eligible for a vaccine. The announcement gave public health units permission to set up mobile and pop-up vaccine clinics. Between tracking down pop-up and mobile clinics, and a complicated online and phone booking system, Ontario’s search for vaccines became a survival-of-the-fittest experience.

April 8: Solicitor-General Sylvia Jones was interviewed on CBC’s Ottawa Morning, telling reporter Robyn Bresnahan the government “wanted to make sure the modelling was actually showing up in our hospitals” before declaring the state of emergency or stay-at-home order. “We’ve seen that now,” Jones said.

April 16: The Ontario government extended its stay-at-home order to at least six weeks in an attempt to stem the rapid rise in cases as the daily case count hit a record 4,812. The news came at a twice-delayed news conference on a Friday afternoon after a lengthy cabinet meeting. The government came out with a decision to lower the capacity at essential retailers to 25 percent, restrict outdoor gatherings, and set up checkpoints at provincial borders with Quebec and Manitoba. It also empowered police carding practices and shut down playgrounds. It did not, however, provide paid sick days and on-site vaccinations for essential workers, which modelling suggested was needed to curb cases over the summer. The government also denied Justin Trudeau’s offer of a Red Cross deployment to help administer vaccines and support exhausted hospital staff, saying, “we do not have a capacity issue, we have a supply issue.”

The response to these announcements was swift and enraged. At least 26 of the province’s major local police agencies took to social media to rebuke the order to use heavy-handed powers to enforce public health regulations by stopping and questioning anyone outside their home. Parents (and doctors) were confused about playground closures, since experts have endorsed outdoor time again and again as being vital for mental and physical health during lockdowns. The outrage forced the government’s hand and both decisions were walked back less than 24 hours later.

April 19: The government expanded the eligibility of the AstraZeneca vaccine to those aged 40+, creating a further scramble for appointments, one that, Sarmishta Subramanian wrote in Maclean’s, favoured those that had “copious free time, ingenuity, a flexible work schedule, a car, the research skills to manoeuvre through a chaotic sign-up system, technological resources including internet on demand, and, ideally, loads of social capital.”

April 20: Ontario’s auditor general said her office would review the government’s selection of hot spot postal codes, following a request from the NDP to do so. “Postal codes showed up on that list as hot spots where they were nowhere near hot spots and then other postal code areas that certainly did justify being on that list were left out. We need to know why,” Ontario NDP Leader Andrea Horwath told CP24.

Science Advisory Table statement: Ontario is now facing the most challenging health crisis of our time. If we want to bring #COVID19Ontario under control, protect our health system and reopen as quickly as possible, this is the way forward: https://t.co/xN7zHCWi10

Meanwhile, Ontario’s science-advisory table released the most blunt memo it’s written throughout the pandemic with two simple headings: “what will work” (paid sick leave, vaccines for essential workers and in hotspots, limiting “essential” workplaces, limiting mobility in the province) and “what won’t work” (“inconsistent policies,” and policies “that harm or neglect racialized, marginalized and other vulnerable populations.”) Notably, the science table endorsed safe outdoor activity, especially for kids.

In the days that followed, reports in the CBC, Maclean’s and the Toronto Star illustrated that the decisions to close playgrounds and enact police carding were made amid cabinet in-fighting, in a rush and without evidence. Political aides and PC party advisors were blamed. Attorney General Doug Downey’s concerns about the unconstitutionality of the policing powers were allegedly ignored. Members of the Science Table were “frustrated and angry,” even “dumbfounded.” Cabinet members reportedly “didn’t want to piss off their stakeholders,” according to one insider. And caucus members were outraged by the decisions.

April 22: Premier Ford offered an emotional apology for the measures enacted just days earlier by his government. He spoke from his late mother’s house, where he was isolating after coming into contact with a COVID-positive staffer. “We moved too fast….Simply put, we got it wrong. We made a mistake.” He also promised to institute paid sick days, saying Ontario’s would be “the best program in North America.”

The same day, Williams told QPBriefing reporter Jack Hauen that the blame for the third wave lay with Ontarians: “If people are doing everything they need to do, then there’s no cases,” he said.

April 25: An outpouring of grief sweeps the province after we learned of the death of Emily Victoria Viegas, the 13-year-old daughter of an essential worker in Brampton. Emily was one of Canada’s youngest victims of COVID; her family lives in a hotspot neighbourhood.

April 26: The Conservative majority government voted down a Liberal MPP’s private member bill that would give 10 paid sick days for essential workers, voting against paid sick leave for the 21st time. Meanwhile, the government also accepts medical assistance from the Canadian Armed Forces and the Canadian Red Cross.

April 27: Toronto’s Sunnybrook hospital transferred its first patient to its field hospital; it didn’t disclose whether the patient had COVID-19 or not. Meanwhile, the first workplace COVID-19 vaccine clinic opened in Brampton’s Maple Lodge Farms, a chicken processing plant.

April 28: In a new report, Auditor General Bonnie Lysyk found that Ontario’s long-term care sector and the ministry that oversees it were not “prepared or equipped” to respond quickly and aggressively to the pandemic. Long-term care Minister Merillee Fullerton responded to the report by claiming zero responsibility: “We didn’t start the fire,” she said.

Hours later Ontario announced a plan for three days of paid sick leave on day nine of the premier’s 14-day isolation. The new, temporary system, which expires on September 25, will require employers to pay their workers up to $200 a day for up to three days, which can be used to isolate, get vaccinated or care for others without sick notes. This program does not apply to independent contractors, and will be retroactive to April 19.

“Since the start of the pandemic, we’ve had workers’ backs,” Minister of Labour Monte McNaughton said at the beginning of the announcement. “This is a game-changer, and this will save lives.” Liberal MPP John Fraser told the CBC that “for 400 days people had to make the decision between going to work sick or putting food on the table. The government didn’t have their backs and I would argue that they don’t now.” The legislation passed unanimously the next day.

Meanwhile, as vaccine supply ramped up, the province released a new schedule that would see everyone 18+ able to book vaccine appointments by the end of May.