The budget included new measures to try to get more women working (but sorry, no more money for childcare). 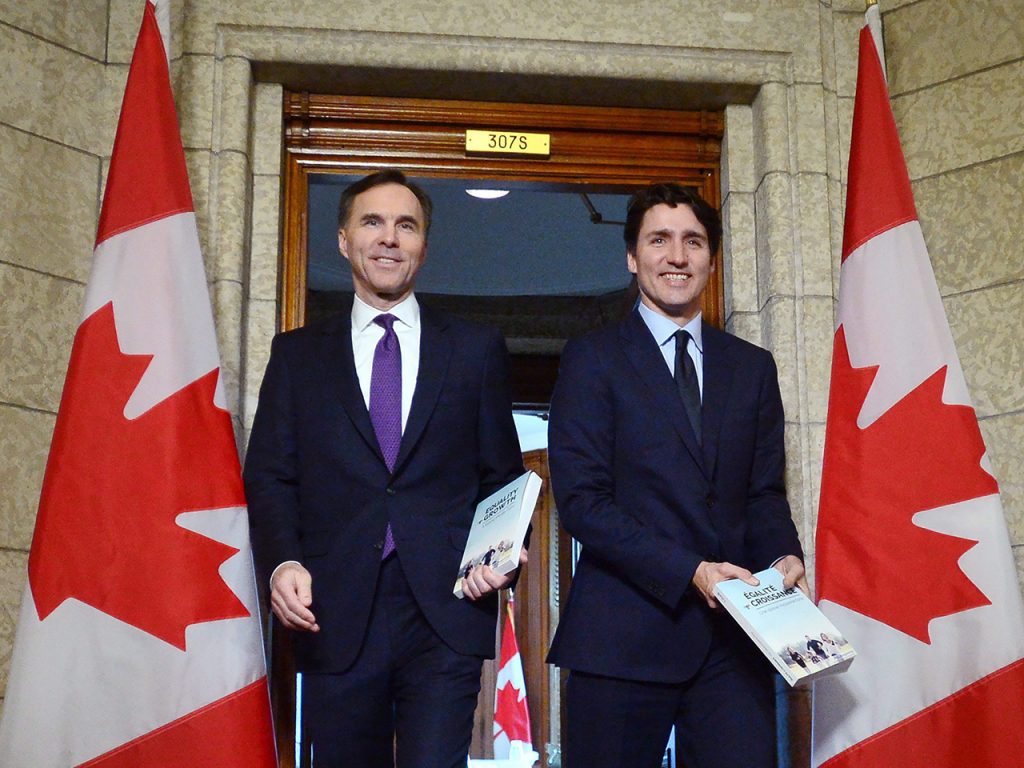 The Liberals leaned so hard into the gender equity message in their third federal budget that they dropped the “g” word no fewer than 359 times in 367 pages. The federal budget 2018 — which was long on spending but short on details — introduced new parental benefits and moves to close the wage gap. Here’s what you need to know about the budget — and how it might affect you:

New measures to try to get more women working

According to the Liberals, Canada’s economy is “deeply tied” to women’s opportunity to work: in 2015, just 77.5 percent of Canadian women were employed, compared to 85.3 percent of men. This budget is trying to close that gap by adding incentives for women to get back to work after they’ve had a baby, or to continue working if they’re in low-wage jobs — but a lot of the government’s moves are just refreshing existing pots of money. The new spending includes injecting $1 billion more next year into a refundable tax credit (the Canada Workers Benefit) that supplements low-income workers (who are more likely to be women), to help them take home some extra cash at the end of the day. The government has extended the Employment Insurance Working While On Claim pilot project — which lets workers keep 50 cents of their EI benefits for every dollar they earn — to apply to people on maternity leave or away sick with the aim of giving them more flexibility in returning to work. The Liberals have also pledged $31.8 million over three years to boost supports for visible minority newcomer women trying to enter the workforce.

The new EI Parental Sharing Supplement — “to support greater gender equality in the home” — promises a child’s second caregiver five weeks of “use-it-or-lose-it” time off work when both parents take parental leave. It’s a model that looks a lot like Quebec’s parental benefit plan, which 80 percent of dads claimed in 2016. If the two parents agree to share the leave — which should be available as of June 2019 — they’ll get an extra five weeks on top of the 35 maximum usually given to a woman on mat leave. The couple can decide how to share up the time, but one of the parents has to take five consecutive weeks during that leave period in order to qualify for the extra time. If they take advantage of the extended parental leave (introduced in the 2017 budget, in which the leave-taker would be off for 18 months, but with lower EI income over that period), the second parent could take up to eight extra weeks of leave. The benefit will cost $1.2 billion over five years to implement, starting in 2018-19, and an additional $344.7 million each year after that. The Liberals say it will help encourage women to cut their mat leaves short and get back to work, because their partner could qualify for taking more of that shared leave time, but economist Kate McInturff is skeptical. “That’s not really what the research shows,” says the senior researcher with the Canadian Centre for Policy Alternatives. “Really the thing that’s going to help women get back to work is childcare.”

… but sorry, there’s no more money for childcare

The government announced all its big bucks for kiddos — $7 billion over 10 years — during last year’s budget, and there are exactly zero more dollars allocated to childcare now that they’ve wrapped negotiations with each of the provinces. “It’s not going to be enough to provide universal affordable childcare across the country,” McInturff says, so settle into the status quo of better or worse daycare depending on the province or territory in which you live. (The budget did, however, mention supporting better childcare options for parliamentarians.)

Canadian women currently earn 31 percent less than men do — and the Liberals have long promised to do something to close that gap. Now they actually are working to narrow it — the budget includes pay equity legislation, which will aim to reduce the gender wage gap in the public sector. By including it as part of the budget implementation package, that means the government is serious about seeing it through this year. While critics worry it will only impact already well-paid public sector workers, the legislation may make waves on the private side too, because it includes federal contract workers. “If you have a contract with the federal government of more than a million dollars, you’re going to have to be able to demonstrate proactively that your employees are being paid fairly and equally,” McInturff says. “That could have a pretty big impact.”

Women entrepreneurs have a harder time gaining access to capital, supply chains and export programs than male business owners do. Which is why the Liberals are budgeting $1.4 billion of new financing over the next three years for women entrepreneurs through the Business Development Bank of Canada. They’re also going to give Export Development Canada $250 million to help women entrepreneurs access global markets. Women farmers in Canada also get a boost with a new lending product through Farm Credit Canada. “There is also some money for training and an attempt to incentivize the private sector to promote women, though there’s no actual mechanism to ensure that happens,” McInturff says.

Women in trades get extra money for training

The trades have one of the biggest gender gaps in Canada’s employment landscape (women make up just 11 percent of workers), and the Liberals would like to narrow it with their $19.9 million Apprenticeship Incentive Grant for Women, over the next five years. The grant would give women in male-dominated certified trades $3,000 for each of their two years of training. While it will help get more women into these jobs, McInturff wonders what it will do to address the high numbers of women dropping out of trades thanks to a hostile work environment.

Research shows women’s organizations are the best poised to make a difference on issues of gender equality — and it’s a message the Liberals heard time and again during pre-budget consultations. In response, they’ve given an extra $100 million over five years to organizations funded by the Ministry for the Status of Women. “Double is good,” McInturff says. “It’s still in the 100ths of a percent of total federal program spending…so it’s a tiny, tiny amount.”

Cash to tackle sexual violence in the workplace and on campus

The government’s response to #MeToo in the federal budget comes in the form of an $86 million pot of money over five years to expand the gender-based violence work it’s already doing. This includes work to prevent teen dating violence, as well as giving more money to high-needs rape crisis centres — including those close to Canadian Armed Forces bases. It will also mean $25.4 million in legal aid over five years to help sexual harassment complainants, plus an ultimatum to post-secondary institutions: Starting in 2019, if they’re not implementing best practices to prevent sexual assault on campus, the government will consider yanking federal funding.

Residential schools’ survivors and their families will get help with their mental health via $248.6 million over three years as the Indian Residential School Settlement, launched in 2007, winds down. Community organizations that serve Black Canadians will also get $19 million over five years to help at-risk youth and to research and develop more culturally focused mental health supports. The government’s also given a $23 million boost over two years to the Multiculturalism Program to fund the development of a new anti-racism effort.

The government set goals and introduced with this budget something they’re calling Canada’s Gender Results Framework — an actual tool to measure gender-equity commitments and have every federal department thinking about the differences their policies and spending decisions make for men and for women. But while they did apply rigorous gender-based analysis (that is, weighing how policy and spending decisions impact the lives of men and women differently), to every single chapter, and though they did throw money at initiatives that will definitely help women, the feds came up a little short on details about how their decisions will make daily life better for Canadian women. “More importantly, this is an accountability measure,” McInturff says, of the framework tools and investments put in place in this budget. And that is what will help the Liberals walk their very loud and frequent talk about making Canada a more equitable place for women.