Palin gets it "together," dads are sad, and toning running shoes may not tone

Tea Party supporters, start your engines. Sarah Palin has released what many are calling the first ad of the 2012 American presidential campaign. 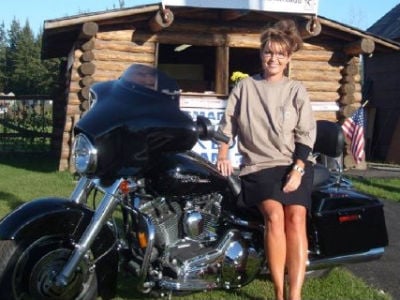 Tea Party supporters, start your engines. Sarah Palin has released what many are calling the first ad of the 2012 American presidential campaign. Palin doesn’t appear until the final seconds of the commercial (right before the silhouetted grizzly bear – no joke), but she’s peppered the ad with shots of other female politicians, giving the entire minute-long piece a moderately terrifying bear-lady-politician vibe that we’re guessing will be a prominent theme in the Palin camp for the next two years.

New legislation proposed yesterday may make using the internet or phone to arrange a sexual encounter with a child a criminal offence with a mandatory sentence of 90 days. It was one of two new offences that would fall under the proposed Protecting Children from Sexual Predators Act. The second would make it an offence to provide explicit material for the purposes of facilitating a sexual offence against the child, and would carry a mandatory sentence of 30 days.

New research has shown that it’s not just mothers who can suffer from postpartum depression – dads get it too. One large study found that 10 percent of new fathers suffer from depression, compared to 14 percent of new mothers. Though its causes have not been extensively researched, studies show that becoming a parent prompts hormonal changes in men as well.

If you’ve bought a pair of Sketchers Shape-ups toning running shoes in the hopes of slimming down and tightening up, you may have been had, according to the American Council on Exercise (ACE). Sketchers and several other athletic brands have recently released soft bottom shoes that make it more difficult to balance. Sketchers says the additional effort required to stay centered mimics walking in the sand, and claims the shoes will strengthen muscles, burn more calories, improve circulation and help you lose weight. The ACE disagrees. They commissioned a study that found the toning shoes are no better than regular runners. Some researchers also warn the shoes could increase your risk of losing your balance and falling and could alter your biomechanics, making it more difficult to walk in your regular shoes. To see a variety of studies on the topic, click here.

Remember good ol’ George W.? Well he’s back in the limelight thanks to Decision Points, his new autobiography that is expected to hit shelves November 9. In it, Bush admits he gave the go ahead to waterboard alleged 9/11 planner Khalid Sheik Mohammed. Waterboarding is considered torture by numerous international legal experts, many of whom believe Bush’s admission may eventually have legal consequences.