The story behind those Oprah magazine images sparking intense conversations 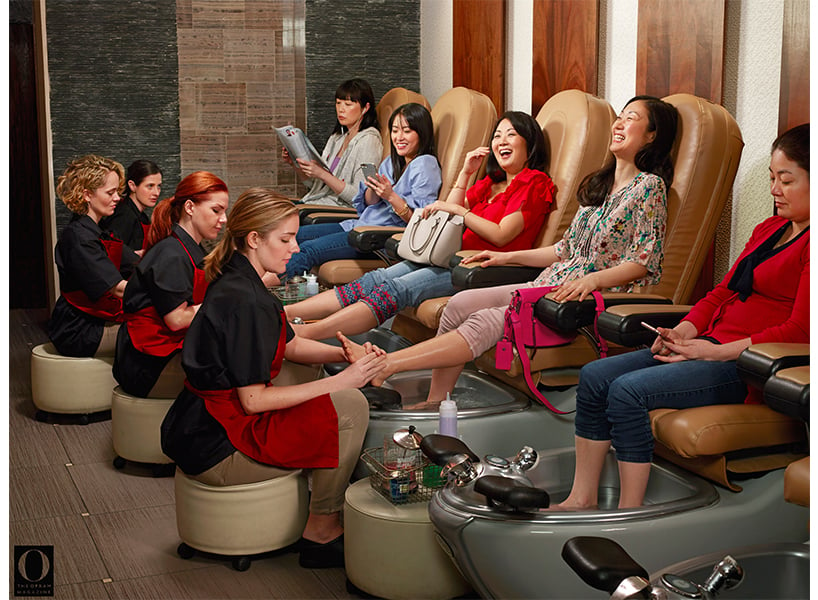 If a picture is worth a thousand words, the word count around the “Let’s Talk About Race” photo essay in O, The Oprah Magazine’s May 2017 issue — a series that has sparked much-needed conversations about race, power and class — must be too enormous to tally.

The series, shot by portrait photographer Chris Buck, shows three thought-provoking role reversals between women of colour and white women in positions stereotypically held in North America by either group. In the first photograph, a group of Asian women sit in pedicure chairs at a nail salon while white women tend quietly to their feet, while in another image, a young white girl stands in a toy store in front of a wall of black dolls. In the final photo, a young Latina woman is seated in a plush chair in a lavish apartment holding a lapdog, talking on the phone and ignoring a white maid pouring her a cup of tea.

The pictures have sparked countless conversations on Twitter, predominantly from people applauding the magazine for the trope-challenging images.

These three pictures make a powerful statement about race and power among women. Photo series by @MrCHRIS_BUCK. @O_Magazine @Oprah pic.twitter.com/nnbwDruJFO

Some critics have accused the magazine of reverse-racism, while others are questioning the magazine’s choice to hire a white male photographer for the assignment, but Buck told FLARE that as long as the photos inspire meaningful conversation, he thinks they’re serving their purpose. “One of the things that’s interesting for me is different people have different reactions and that’s really good,” says Buck.

“In a way the best pictures ask questions but don’t necessarily answer them. At best these pictures do that.”

Me when I discover Oprah commissioned a white man for this ‘powerful’ photo essay on race pic.twitter.com/aKQTLxIlc8

Flare, Chatelaine’s sister publication, spoke to the photographer about the delicate task of approaching this assignment as a white man, his goal of delivering the message with what he calls a “light touch” and the importance of art impacting cultural conversations about race.

How did the project come to fruition?

From my end, it was a normal editorial assignment. So I was asked if I’d like to participate and I said yes. The idea and the central visual aspects were driven by the O editorial and art department teams.

What was your reaction when you got the assignment?

I recognized it is a sensitive area and there was a chance the photo essay could be provocative, but I’m drawn to that. I want pictures that are interesting and have impact and draw people in and might be thoughtful and so I was excited to be a part of it. As a photographer, I was interested in the challenge of doing it and doing it well. 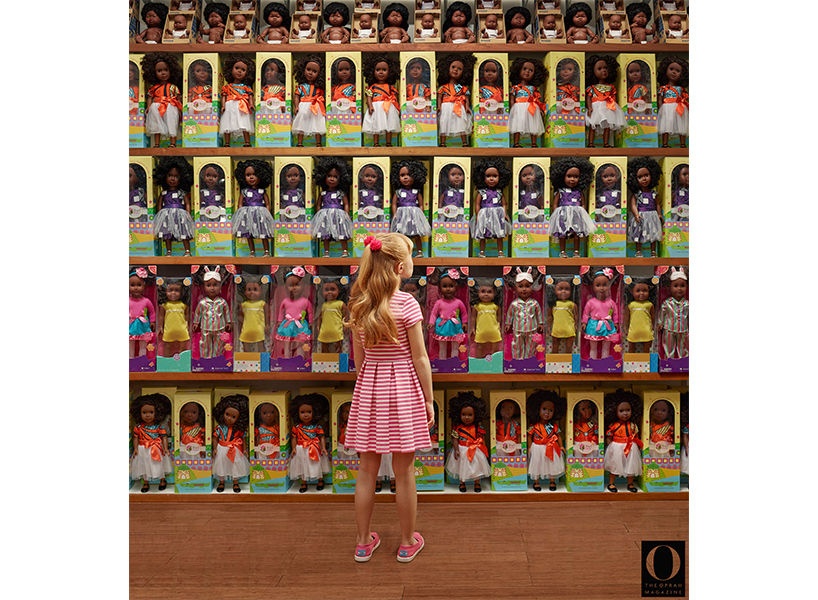 How did you feel photographing a story about racial stereotypes as a white man?

It was something I was excited to do. As someone who’s a prominent photographer in the U.S. and one of the primary voices in portrait and advertising photography, it’s important for me to be part of what is going on in the culture; to distance myself from it and be disinterested would be doing an injustice to what’s happening in the culture. It’s important to engage in what’s going on in terms of cultural diversity or in the intellectual life of the country. When I was asked to the do it, I was pleased and happy to be a part of it and I hope my contribution made it better.

What has the reaction been from people close to you about the photo essay?

Different people have different reactions. I was talking with a friend who’s African-American and he felt that when some white people get upset about the pictures, they don’t really realize that the pictures in a way aren’t meant for them, they’re meant to speak to people of colour. And that is an interesting take. I’m a white person, so it’s not something that would’ve crossed my mind, but his take on it made sense given the kind of reaction that’s seen online and through friends. The fact is that even for people of colour, not everyone is going to be specifically connected to it. For some people who are particularly sensitive to racial issues or are activists in some way, it’s going to really speak to a narrative that’s important to them. And for people who aren’t particularly politically minded, it may have less resonance, and that’s totally fine. One of the things that’s interesting for me is different people have different reactions and that’s really good — in a way, the best pictures ask questions but don’t necessarily answer them. At best these pictures do that.

What do you think about those people on Twitter who say the photos are reverse-racist?

I’m happy for them to be part of the dialogue. The way I would advise people who find these pictures either offensive or questionable or unduly provocative, I would ask them to see them as a fable. They’re about reversing race expectations in a social context and so it’s asking you to ‘imagine this.’ In a way I hope I brought to it a bit of playfulness and even when dealing with a sensitive subject and something that certainly an important part of the social dialogue right now, I hope to deliver them with a bit of a light touch so everyone feels like they’re invited to this conversation. So if someone is put off by it or feels they’re being excluded from it, that’s unfortunate but if they’re vocalizing their feeling about it, that’s ultimately a good thing. I want everyone to feel like they can vocalize their feelings about it, whether they’re positive or negative. More talk about this is a good thing. I’d rather people not get upset or offended, but if that’s their reaction, then I think that’s totally fair, too. 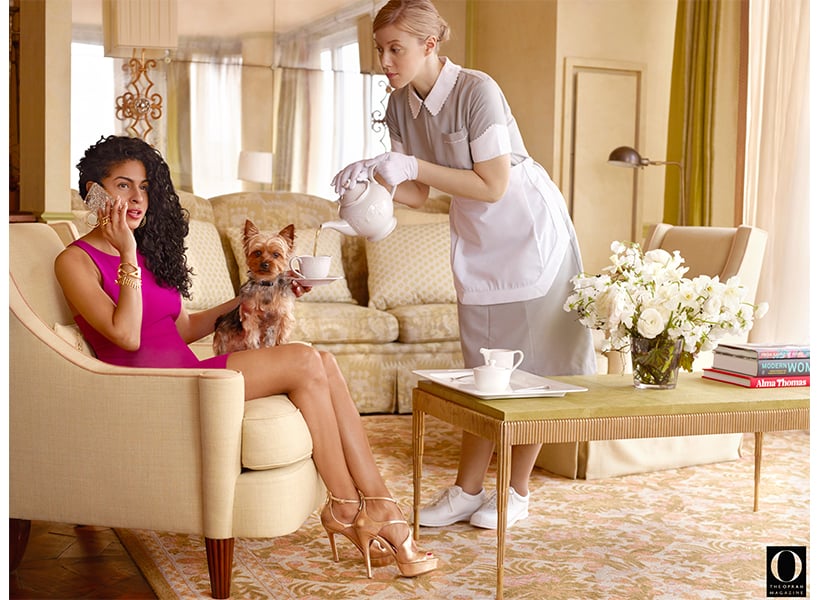 What was the most challenging part of the project?

It was really quite straightforward. What’s good about it is coming from the Oprah Magazine, the legacy, and her whole backstory — Oprah has had such a strong level of support among all demographics of women that I think coming from her, there’s a sense of goodwill it’s not coming from a place of attempting to alienate or disrespect any group or any people, and so I think that’s one of the reasons why I felt comfortable stepping into it. In some ways, Oprah has been more politically vocal in the past few years, but there’s a reservoir of goodwill around her that made me feel comfortable that they were going to hit the right notes and that it wouldn’t be grossly misinterpreted. And the response has generally been consistent with what the intentions of myself and the magazine have been.

So would you say that as long as it’s provoking conversation and thought, it’s accomplishing what is was intended for?

More:
‘I can’t magically shrink myself to accommodate others.’ Why I called out a fat-shamer on a flight
Remember those Anne Geddes babies? Here’s what some of them look like now
What actually went down at Pippa Middleton’s royal(ish) wedding