I Found Out My Cancer Came Back The Day COVID Hit

Since her cancer relapsed at the start of the first lockdown, Robin McGee’s treatment has been affected every step of the way.

In March 2020, the same day the pandemic’s first lockdown was declared in her province, Robin McGee got a call from her family doctor telling her her cancer had recurred.

The Nova Scotia-based clinical psychologist was first diagnosed with late-stage colorectal cancer in 2010. Since then, she’s joined the healthcare advocacy group Patients for Patient Safety Canada and has written a book, The Cancer Olympics. Her book details her experience having her diagnosis delayed by two years (despite having symptoms, a family history, and eventually a positive cancer screening test, she says the four doctors she consulted dismissed the idea of colorectal cancer because she was under 50) and lobbying the province to make the treatment she needed at the time more readily available (though by the time it was, it was too late for her to receive it). 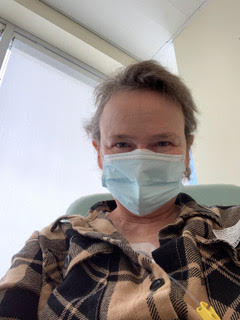 Over the course of the pandemic, McGee—like many patients in Canada—has experienced significant delays in treatment.

After waiting three months, she began her chemotherapy in May 2020, with periodic gaps in treatment to give her body a rest from the taxing side effects. In July 2021, she took a break that was supposed to last three months. Due to a lack of healthcare resources, that interval got pushed to six.

Like other Canadian jurisdictions, the province of Nova Scotia had to postpone elective surgeries to make way for an influx of COVID-19 cases. According to a report by the Canadian Institute for Health Information released last December, almost 560,000 fewer surgeries were performed across the country between March 2020 and June 2021 compared to 2019.

With Omicron putting more pressure on Canada’s already-strained healthcare system, the backlog of surgeries is growing. This impact is felt by overexerted healthcare workers and patients—especially those whose conditions have worsened as their procedures got pushed back. McGee says these delays and cancellations have left many patients in “absolute terror and anguish.”

Below, she shares her experience navigating the pandemic as a cancer patient.

What was it like finding out your cancer recurred at the start of the pandemic?

The whole world remembers what that was like: all surgeries were cancelled; nobody could reach anyone; all the doctors’ offices were closed. That was emotionally worse [than when my surgery was recently delayed in September], because I couldn’t get a hold of doctors at all. And it was not the fault of those providers, it is entirely the fault of the pandemic disaster and the public health decisions attached to that.

Normally, when you’re diagnosed with cancer, especially if you’re already in the system, they give you a few weeks to resume treatments. But in my case, I had to wait three months. It took me five months to even speak on the phone with a surgeon. It turns out I’m inoperable, so surgery was not an option, but you don’t know that until you know it. So I was sitting there going, ‘“maybe there’s a chance,” but I couldn’t get through.

At that time, as a result of my previous cancer treatments, I also had what’s known as “nuclear cataracts” in both eyes. My optometrist told me if I didn’t get surgery right away, they would make me blind within six months. My eye surgery was booked prior to the pandemic, but it got cancelled with all other surgeries. It had to be done before I could start chemotherapy; if not, my eyes wouldn’t heal properly. I was desperate, so I posted about it on social media. Through lobbying efforts, I got a letter from the Nova Scotia Health Authority allowing me to go to a private clinic. I was able to get my eyesight corrected a few weeks before starting chemotherapy in May.

What happened when your chemotherapy was delayed most recently?

I’m on chemotherapy for life. But because it’s very hard on your systemic health, like your heart and kidneys, it’s good to have breaks so your body can recover.

I started a chemotherapy break in July 2021, and it was only supposed to be three months long, but it was delayed due to COVID resource-related problems. I have a cancer blood marker that tells me when I’m starting to progress again. At the end of September, it started going up, so I knew I needed chemotherapy to start right away. But when I saw my surgeon in October, he told me I needed a minor, 15-minute superficial surgery before resuming treatment. He then told me many of the operating room nurses were seconded to COVID response. As a result, I wasn’t able to get in for this 15-minute surgery until December—so I had a two-month wait. And of course, afterwards, I needed two weeks of recovery before I could begin chemotherapy. But then it was the holidays, and the hospital was on a skeleton crew, so I couldn’t start my treatment in December at all. They couldn’t get me in until mid-January. What was supposed to be a three-month wait turned into a six-month wait.

How did the delay impact your health?

In November, I did a PET scan—a test that tracks the progression of cancer in the body—which confirmed that the cancer is growing and getting a lot worse. Shortly after that, I could feel the progression: I can sense that the tumour in my pelvis is larger. I don’t know that I could ever afford another break given how much progression there was.

A recent scan showed that my cancer grew by nearly half its size while my treatment was delayed, and I have a new pelvic lesion as well. This is what happens when COVID impacts cancer care.

How were you feeling during that period of delay?

When you’re waiting for surgery and you have evidence of cancer spreading, your apprehension grows. You have to come to a point of acceptance with terminal cancer anyway—but to have avoidable delays essentially caused by anti-vaxxers makes my blood boil. Half the time I was angry. The other half, resigned. Chemotherapy is not a trip to the park, but when you’re getting it, you at least know you’re trying to address your danger. Psychologically, it’s better to be in treatment.

What do you think could or should be done to address the issue of surgeries being delayed?

At least in Nova Scotia, the bottleneck was in the availability of nurses. So, big-picture, we’ve got to have a deeper field of qualified nursing staff able to step up to roles when something critical happens. Nova Scotia needs better healthcare resources in that respect.

I believe that governments must develop an exception policy so that doctors don’t have a blanket ban on [all elective surgeries] and they can at least save the most desperate patients, including patients whose conditions deteriorate. When it comes to cancer surgeries, many of them are life and death things.

With Omicron being so transmissible, the jeopardy to cancer patients is much worse, because they are already uniquely vulnerable. Many people who are waiting for these procedures are dealing with absolute terror and anguish. For their anxiety to go down, they need to know when their surgeries are scheduled. Within the whole Canadian healthcare system, the path to getting surgeries sooner is to end this pandemic. The way we end this pandemic is through vaccination, social distancing, and mask-wearing.