My husband became a woman

We were an ordinary couple, until the man I married became openly transgendered. Today, the kids call him "mada," and I am still his wife 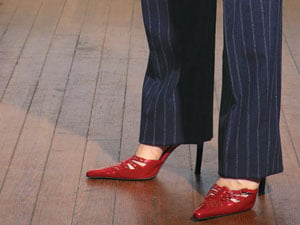 In the summer of 2005, my husband and I began telling people that he wanted to live as a woman. At first, we didn’t know how to conduct this life. There wasn’t a guidebook about transitioning that we could follow. After lots of struggling, we decided that we should be very open. At the time, we were both doctors working in the emergency room at Markham Stouffville Hospital, just outside Toronto, so first we went through the hierarchy: We began with the chief of the emergency department, assuming that my spouse would then be asked to leave. Instead, we received an amazing, non-judgmental response. We then told the chief of staff, then the medical advisory committee; we sat down with our emergency-physicians group.

Everyone took it surprisingly well, but it was exhausting. Meeting with all these people, every day for a week, and exposing intimate details: I was extremely uncomfortable. My spouse was quite technical about everything, saying that he had gender-identity disorder, which meant he felt like he was in the wrong body, that he had been struggling with it for a long time and needed to make the transition. He had probably been thinking about this speech his whole life, but honestly, I wasn’t listening.

I just sat there and wished I could crawl into a hole in the ground.

The first signs emerged in 1994, one year after we were married. We were living in a house with an unfinished basement, and I happened to inadvertently find a pile of clothing – women’s clothing. It was immediately clear that this wasn’t some sort of infidelity. There was just so much of it. And it wasn’t cheap: I found some really nice shoes in there.

I felt humiliated, I felt stupid, and I wondered what else my husband was lying about. I confronted him about it, and he said he would stop. There was a lot of guilt and a lot of bargaining; every piece was thrown out and that was supposed to be it – until I found the next load of clothes. I initiated that purge myself.

But the clothing kept coming up, even after I became pregnant with our first child, a daughter. He went to support groups; at the time, he truly believed it was just a cross-dressing thing. He kept swearing up and down, “Thank God I’m not a transsexual.” Sometimes, I’d accompany him to these meetings, and it all seemed very benign. Most of the people there were older and wearing age-appropriate dresses. No one looked like a drag queen; they just looked like your mom or aunt. If everyone was dressed provocatively, I would have been frightened. Instead, I was uncomfortable and a little resentful about spending my time there.

We talked more about it; I would support him, and he would get dressed and attend these meetings. I bought him clothes as gifts, and it was manageable.

We didn’t hide it from our children. When my daughter was three, she’d see her dad dress up once in a while and she’d say, “Daddy looks pretty.” We had a conversation with her about the concept of privacy: It was okay if she wanted to tell people, but she had to be prepared for them to think it was odd. We were dealing with it.

But as the years went on, my husband began to feel more and more despair. We fought. He would leave the house. It was all quite dramatic. I’d be left holding the ball and staying with our daughter and her younger brother.

But what brought it to a breaking point was that he became suicidal. After one fight, he drove to the lake and walked into the water. He came home, wet, and said that for his mental health, he needed to make this transition and live full-time as a woman.

It was an easy decision for me.

What people need to understand is that this isn’t a choice. Why would he choose to do this? It’s awful. It’s clearly difficult in this society. But we all have a fundamental right to be who we are. Still, when they hear my story, women universally ask me, “How can you stay together?” The way things stand now, I guess I have cautious optimism. Our ideal goal as a couple would be to stay together, although we both realize that it may not be a possibility. The time may come when we acknowledge that it’s over. But we’re not there yet.

I don’t want to say the wrong thing, but of all the problems to have – addiction, infidelity, cancer – it’s workable. Certainly, it represents a sacrifice. A friend asked me the other day what would happen if I met a really great guy. I said, “I’ve already met a great guy. He just happens to be a woman.”

There are so many good things that are hard to let go. My spouse is a great person, a true friend, and we’ve known each other for more than 20 years. Do you just ditch your best friend? That’s not the right thing to do.

If it were just me, maybe we would have split up. But I needed to set a good example for the children. I know that the kids will do better with both of us in the picture. And my children saved me, through all of this.

When we told our kids in the spring of 2005, they weren’t so inquisitive, because of their young age. My daughter was seven at the time, my older son around four and my youngest son was not yet one. They did come up with a new name for their father, because it wouldn’t be right to use “daddy” anymore; instead, they say “mada,” a combination of mommy and daddy. My youngest is three now, and he likes the word “daddy” because it’s a novelty for him. Sometimes the kids will play house, and someone will always be the daddy. No one plays mada.

It’s been two years since her transition, and for me, it’s still very early. I’m still getting over the loss of my husband. At times, it’s like living through an odd grieving process. But if somebody dies, they are gone: She’s still here. And our relationship, which I believed to be unshakable, is so different.

It’s very strange to move on. For instance, I tried to be good about the pronoun shift right away, but it was a real challenge. And then I began to get other people’s pronouns mixed up. It took a while – a full year, in fact – to call my spouse by her new name. Instead, I’d call her “honey,” which I used to do anyway, although I couldn’t do it in public – I didn’t want to call another woman “honey.”

I’m almost 40 years old now. I’ve been married for 14 years. I’m supposed to be in a certain place. I didn’t anticipate that the place would involve someone who was very insecure about her looks, like an adolescent girl. It’s understandable, because she’s exploring her femininity. But it got to a point where I didn’t want to see much of her at all. The whole thing was just hard to look at, hard to listen to. She was almost a caricature of feminine characteristics at the beginning.

I asked, “Does your voice have to be so high? Do you have to wear so much makeup? Do your clothes have to be so tight?” I was extremely resentful about having these conversations with the person who used to be my husband.

What’s more, “husband” used to be such a favourite word of mine. And I loved being called someone’s wife – the cozy familiarity of that word. I had a huge amount of pride in how we were as a couple and as a family. Maybe that was hubris on my part, but the fact that I can’t take that same pride anymore represents another loss.

Then there’s the loss of our friends. When we told them, we were fully prepared for no one to ever talk to us again. But initially everyone was great, which was splendid. Then I said to my spouse, “Well, they’re all fine now, but let’s see who’s still calling us in a couple of years.” That number has very much declined.

It’s okay. I understand that it’s an uncomfortable thing.

I am trying to move on. I’ve enrolled my kids in softball, which is right outside my comfort zone because it means meeting new people the way we are now.

It took me a while to move beyond acting like she wasn’t there, and I’m just starting to introduce her as my spouse. Sometimes, it’s no big deal; other times, it’s met with uncomfortable, endless silence. But I’m trying, and that represents a change for me.

It’s hard: I like men. I know there are people who are more fluid in their sexuality, but that’s not me. She considers herself a lesbian, and I’m not, though I am secure enough not to correct people who think we’re a lesbian couple.

We joke sometimes that we’re going to find me a boyfriend, but that’s not going to happen. I am making a considerable effort: There is intimacy between us, although it’s fraught with difficulty. We talk about her issues quite endlessly, but it’s come to a point where I think enough is enough.

There may be spousal support networks out there, but I haven’t sought them out. There are so many other things to do and this has taken up far too much of my time and brain space. This may, in part, be avoidance. I’m shy, so it would make me feel very uncomfortable to go and talk to people about this stuff.

I prefer to think of this as a very small part of my life. I’m much more than this one thing.