Nothing can stop this rower — not even blindness. 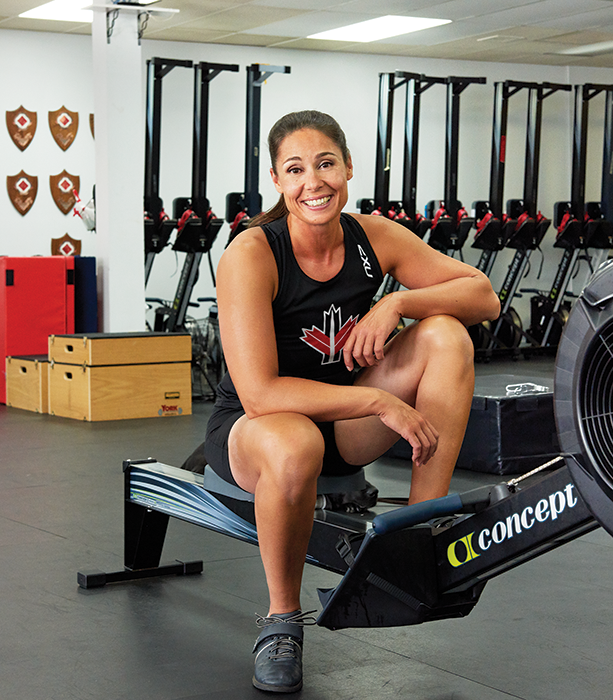 When Victoria Nolan was a kid, she thought her eyesight was fine until one day, when she was performing in a play, she realized her classmates could comfortably find their way through a dark gymnasium while she had to hold onto another student’s shoulder to guide her. At age 18, she was diagnosed with retinitis pigmentosa, a degenerative eye disease that caused the rods and cones in her retinas to deteriorate. Loss of night vision — in her case, the ability to see in dark rooms — is one of the first signs of the disease.

She got a cane and connected with the Canadian National Institute for the Blind for support. It was tough, she says, but manageable. Years later, she and her husband had children — first a son, Tarabh, then a daughter, Ceili — and the pregnancies accelerated the disease. Her sight diminished from 10 percent to 3 percent. “I couldn’t take my kids to the park or to play groups,” she says. “Even in the house, I was agitated because I couldn’t keep them both in my sight.” Frustrated, depressed and looking for a way to prove herself, especially for her kids’ sake, she took up rowing.

Nolan has since competed in two Paralympic Games (Beijing 2008 and London 2012) and five world championships (securing gold and setting a world record with her team at the 2010 world championships in New Zealand) and published a 2014 memoir, Beyond Vision: The Story of a Blind Rower. Now she’s heading to Rio with Canada’s para-rowing team. “To be in such a big crowd of people who are all passionate about their sports but also overcoming disabilities — there are no words to describe it,” says Nolan.

She spent the past winter in Victoria, B.C., and summer in London, Ont., training with her three teammates and their coxswain (the person in charge of navigation and steering). She relies on audible cues (like the sound of the oars hitting the water) to navigate from her position at the bow. “It’s like dancing,” she says. “You want to keep the timing and the rhythm with everyone else, and you can anticipate it because there is a continuous beat.” Her biggest motivators are her children, now 13 and 11, and her husband, who will cheer her on in Rio. “I never wanted my kids to be ashamed or embarrassed that I am blind,” she says. “And it’s always the first thing they tell people: ‘My mom’s blind and she rows for Canada.’”