'We’re all at an age where we’re beginning to see the mortality of our parents. You get this panic of losing the connection to your culture that you probably always took for granted.' 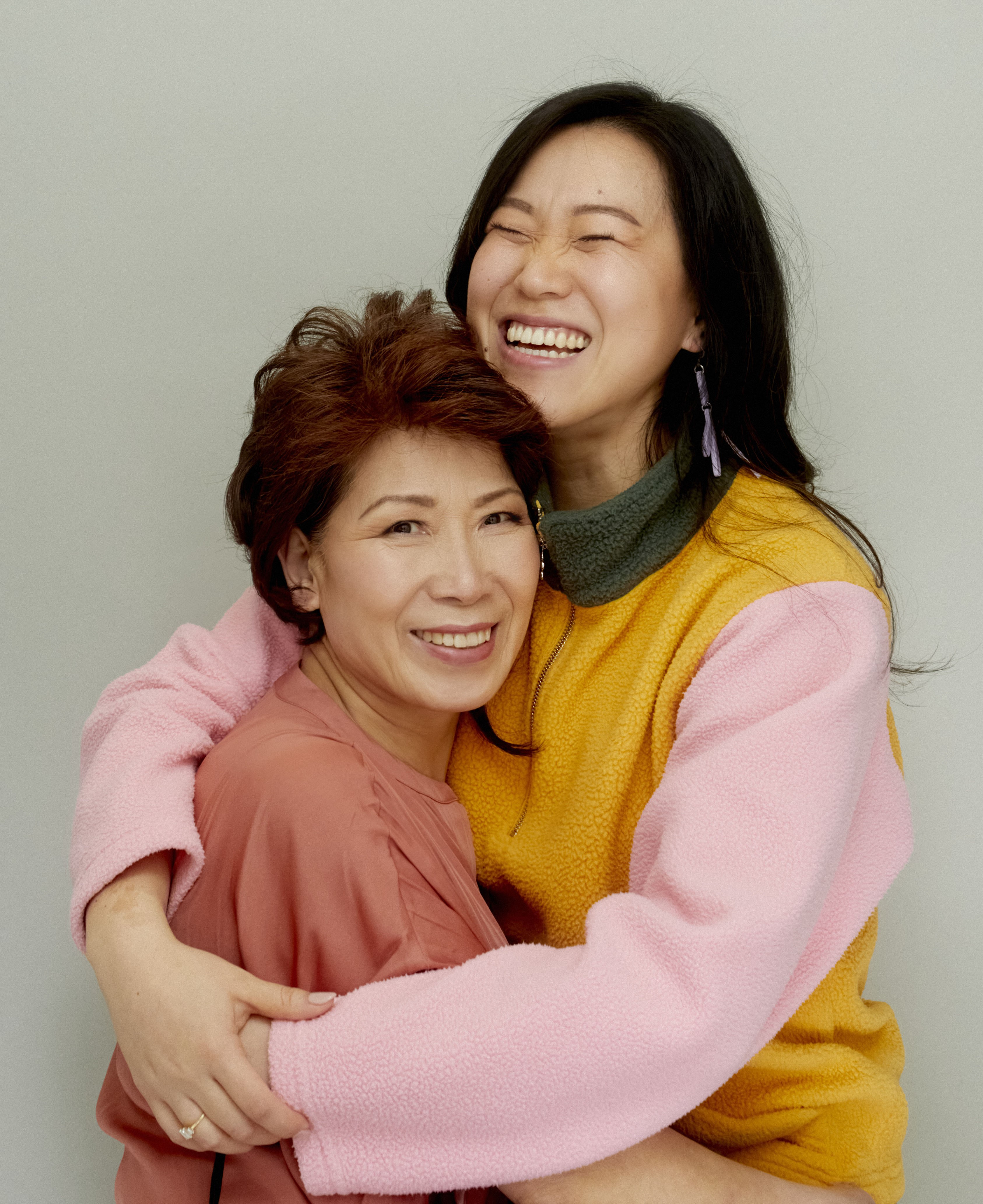 From left: Michelle and Diana Lee. Michelle is the owner of Toronto’s Kimchi Korea House, and the star of the restaurant’s Instagram account.

This column by Hannah Sung—the creator of At The End Of The Day, a news perspective that puts people first—is the first in a three-part series on “good change.” Here, Hannah talks to Diana Lee about helping her mom, Michelle, navigate her Korean restaurant through the pandemic. Spoiler: Michelle is now an Instagram star, and Diana feels more deeply connected to her culture.

If you want to feel all the feels, scroll waaaaay back through the photos on your phone. I recently did that, searching for a particular pic, and accidentally found myself in the Before Times.

I was staring into a different world. It felt like a house of cards inside me came undone.

Sure, I might have rose-coloured glasses on now that we’re in the sixtillionth wave. But the nostalgia was extremely powerful. I had so much photographic evidence of a beautiful life. My children’s babyish faces. All the places that were not my home. It looked carefree, to smile and laugh in the presence of so many other, aerosols-emitting people.

So after like 3 years of staying home, not being able to work and wearing masks the endgame was always just fuck it?

I’ve been pragmatic and cautious for the entire pandemic yet I still couldn’t predict that we’d end up in the position we’re in now, two years later, in spring, when seasonally, things are supposed to feel hopeful.

Plans keep getting wrecked and when we can’t plan, it’s hard to hope.

But I’m tired of equating change with loss. Before the pandemic, I used to embrace changes in my life.

Change doesn’t have to feel inherently bad. The pandemic, in all its waves, makes that hard to remember. So I’m trying hard to reconnect with this truth by focusing my next few newsletters on people who made major changes in their life over the last couple of years.

Earlier in the pandemic, I came across some Instagram stories that intrigued me. They were from a Toronto restaurant kitchen, called Kimchi Korea House, where a Korean immigrant woman was doing tutorials, laughing and being charming while mixing and measuring ingredients by hand.

It was a peek into a restaurant kitchen during a time when the world felt shut down. I was intrigued and followed the account.

Who was behind the camera?

…The More We Come Back To Our Roots

Meet Diana Lee. She is a 32-year-old radiation therapist in Toronto and the perfectly-coiffed, voluble woman in the restaurant kitchen is Diana’s mom, Michelle Lee (or Mama Lee, as everyone calls her).

As soon as I called Diana up, we launched right in.

“I don’t know if it’s just me in my head, or if there’s a movement happening with children of immigrants wanting to connect more with their roots,” Diana says, mentioning the books Crying in H Mart by Japanese Breakfast musician Michelle Zauner and Korean American: A Taste of Home, a cookbook by New York Times food writer, Eric Kim.

“It’s like, Maybe it’s not just me,” Diana says. “We’re all at an age where we’re beginning to see the mortality of our parents. You get this panic of losing the connection to your culture that you probably always took for granted,” Diana says.

“Also, the culture was not always a happy, easy thing when we were younger,” she adds. Oh yes, I really understand that, too.

Open for business (no, really)

Kimchi Korea House is a family business. Diana’s cousin (“he’s like my brother”) is the chef and Mama Lee runs the business and makes the kimchi and banchan, the numerous pickled and fermented side dishes that are the hallmark of Korean meals.

Before spring of 2020, their business bustled with foot traffic in the downtown hustle of Dundas Street West, where the restaurant is situated between the Toronto Eaton Centre and hospital row on University Avenue. Students, workers and regular customers all passed through to pick up a bite. Overnight, however, the city core became a ghost town.

“It was eerie,” Diana remembers. Meanwhile, her mom’s restaurant wasn’t on any delivery apps before the pandemic.

“She was like, ‘Why would I when they take 30 percent commission?’”

But things would be different now. Mama Lee needed to pivot and operationalize for a digital world. Diana’s first focus was to get Kimchi Korea House on all the apps, revamping its website and starting an Instagram account.

Above all, Diana needed for people to know her mom’s restaurant was still open. Instagram was her way to do this but it also had the effect of distracting Mama Lee from what was happening. There were no customers or orders coming in and it was devastating to her, Diana says. “Filming things like the kimchi tutorial or the japchae tutorial or pajeon tutorial, and seeing people’s responses, it made her happy in a way.”

“I got so many messages from people who aren’t Korean and that surprised me,” Diana says. “They’d say, ‘I’m Persian’ or ‘I’m Italian and she reminds me of my grandma.’”

Mama Lee has always been camera-ready. She enjoys being well put-together, gets a perm every other week and continues to wear lipstick—even under her mask. More importantly, she just really wants to share her food, which goes beyond the comfort of a meal.

“Part of what brings her joy on a day to day basis is seeing customers who have never tried Korean food and bringing them different things. Or she’ll see what banchan they ate first and she’ll bring them out a different banchan that we normally only serve the staff,” Diana says.

“She’s a great ambassador for Korean culture through food. She genuinely loves when people enjoy the food because it’s an extension of herself.

Michelle also tells her daughter about witnessing, through her restaurant, how people’s perception of Korean culture has changed since she first immigrated to Canada. These days, people come to the restaurant saying they’re obsessed with K-dramas and want to try a food they saw on TV.

“The other night, someone came in and wanted to eat something because they saw BTS eat it on their show,” Diana says. “It’s still very strange to Mama Lee, to go from living in a new place, where you couldn’t even find the right cabbage or gochugaru to make kimchi, to Korean food being so widely-accepted.”

A path from assimilation to reconnection

Every immigrant family tries to find a path toward success over generations. Diana says her mom wanted her family to assimilate to succeed in Canada.

“She didn’t even speak Korean to me for the first three years of my life. She tried to speak as much English as possible,” she says. “My Korean is really abysmal. If I’m at work and I have a Korean patient, I can’t deliver a medical translation. I can’t say, ‘Did you have a bowel movement today?’ It would be, ‘Did you have a poo poo?’”

When Diana says this, I have to laugh because I completely understand what it’s like to learn a language solely from the role of being a child.

“It feeds into my guilt that I’m a bad Korean. What my mom wanted was for me to be a great Canadian,” she says.

“There’s no such thing as a bad Korean,” I cut in.

“I know. And my mom is so happy that I have a good job and I’m not destitute. My mom being happy is what’s important to me.”

“I’ve ultimately accepted that the best way I’ll be able to raise my kids with a strong connection to Korean culture is just have my mom raise them,” Diana laughs.

Diana is joking but it’s heavy to think about culture, diaspora and generations, especially when we’ve all been thinking about our mortality over the last few years.

One conclusion for Diana is simply that food can be a tie that binds generations.

“That’s my own connection. That’s something I can learn, that I can do, that my mom can help me with. Food is universal.”

I loved talking to Diana and maybe it was my mood, but she pretty much brought me to tears. Her mom’s cooking really does connect people. It connected us. And my mom’s cooking connects my own family, too.

Today, Diana has been posting less on Instagram, to put a cap on how much time she spends on her phone, plus she has a whole job in healthcare and is planning a wedding.

But sometimes she’ll be there at her mom’s restaurant and Mama Lee will say, “Oh my god, look at these cucumbers, don’t they look so good?” In times like those, Diana will flip on her phone.

Recent years have been tumultuous. The more things change, the more some things should stay the same.

I’m grateful for this conversation with Diana. And how cool is Mama Lee?

Hold it all very close, the people and the banchan and whatever moments you can share in these changing times.

Want to read more from Hannah? Subscribe to her weekly newsletter above. For now, here are two more of her columns that we love:

Why I started a company during a pandemic
Would you ditch your mask?