What I’ve Learned About Love And Loss From My Dogs

As I prepare to say goodbye to one beloved dog, a new puppy offers resilience and hope for a fresh start 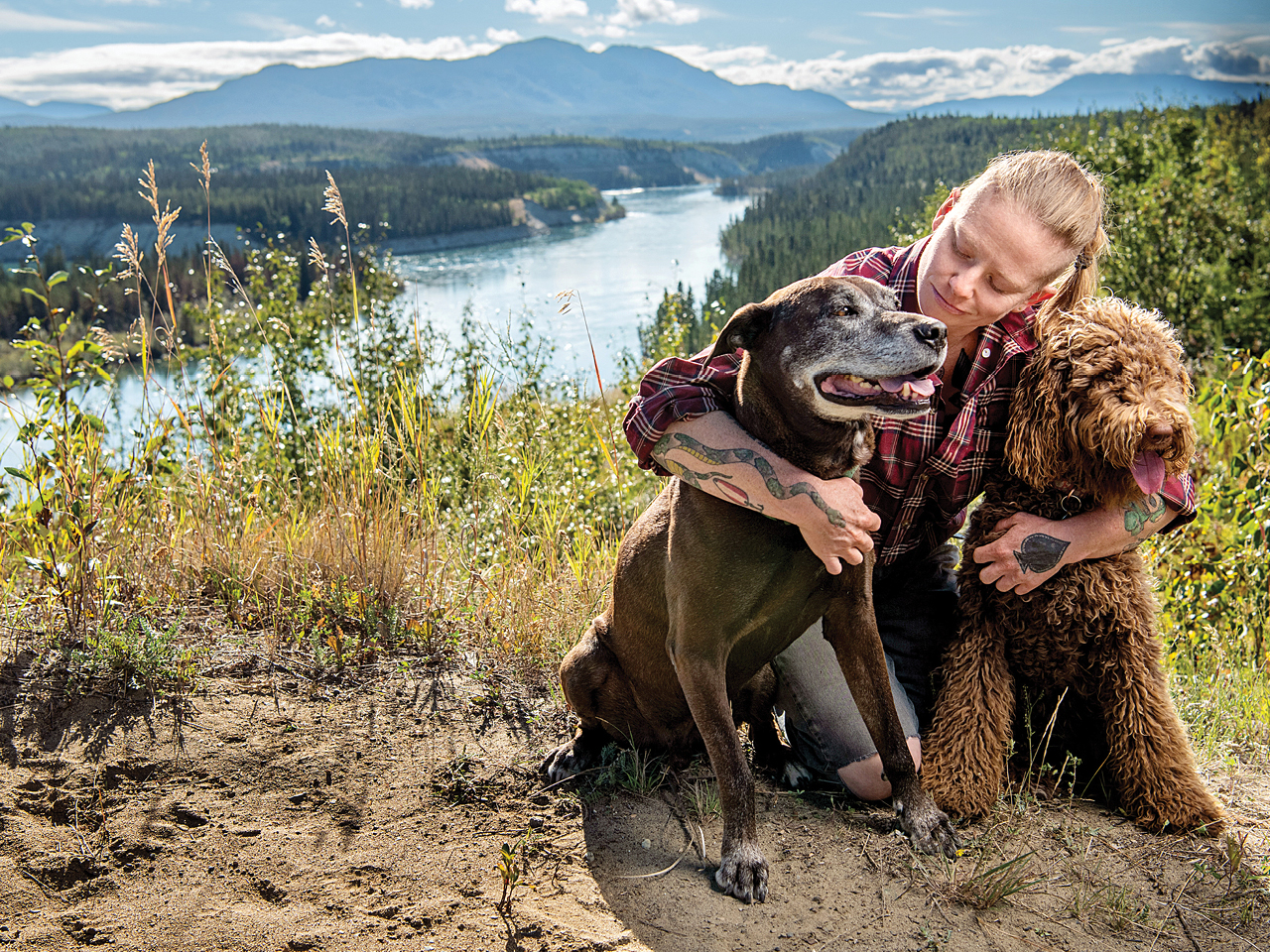 Audrey wakes me in the middle of the night, a big red paw on my shoulder.

Mumbling, half-awake, I slither from my sleeping bag, unzip the tent and crawl under the fly. Audrey slips out behind me, and I quickly zip everything up again. It’s mid-August and we’re camping next to a pothole lake some 110 kilometres southeast of Whitehorse, Yukon; the mosquitoes are thick.

Audrey disappears into the brush to do her business. The moon is full and round, so bright I throw a shadow standing there, barefoot with my arms crossed. I keep careful watch, whooping occasionally into the dark. Audrey is only eight months old, and this is bear, porcupine and coyote country.

If she were Herman, I’d have let her out and back in on her own. But Audrey is not Herman.

When I was 23, I lived alone in a one-room walk-up in an Ottawa neighbourhood that, at the time, no one wanted to live in. I had a hard time making friends and was in a go-nowhere long-distance relationship with a jealous, controlling older woman. I was terribly lonely. I decided a dog might help.

I had grown up with dogs and knew they were a big responsibility. I researched breeds carefully. Herman, the breeder told me, was a lab-shepherd mix; it turns out he’s actually mostly pitbull with a dash of chocolate lab, the way you sometimes get a couple of onion rings in the bottom of an order of fries. I’ve never been sure if this was a genuine mistake, or because pitbulls were (and largely still are) banned in Ontario, where Herman was born.

I looked at a half-dozen litters before I visited Herman’s. Of 13 puppies, he was the only one with white markings: a star on his chest, like an asterisk. When I picked him up to look him over, Herman—so big-headed he fell over taking a corner—looked directly into my eyes as if considering something important, yawned, lay his head on my collarbone and went to sleep. I bought him for $50 and a sixer of Pabst Blue Ribbon.

I had a little Yamaha motorcycle; I tucked him into my hoodie so he’d stay warm, zipped him into my leather jacket and drove home. That’s how I ended up with Herman.

Audrey returns from the brush, slipping inside as I reopen the tent flap. I brush the pine needles from the soles of my feet and crawl back into bed after her.

Herman is in his usual place at my side, curled up with his tail over his nose, snoring softly. He hasn’t stirred. In the last few years, in addition to stiffening hips, splaying feet and cataracts, Herman has started to go deaf.

I run a hand along his back. The ridge of fur at the base of his tail is fluffed up; he’s cold. My tattered plaid jacket is folded next to the pillow. I drape it over him, tuck him in.

At my feet, Audrey is watching. I take a wool shirt and wrap her up in it. I don’t think she’s cold, I just want her to feel loved.

When Audrey takes a drink of water, she submerges her whole face, blows out bubbles and wildly tosses her head around to shake out the drippings from her “dogstache.” She is patient, gentle and great with kids; she’s also a stone-cold predator who catches fish at low tide with her face. People often note how calm Audrey is, mistaking the hyper-focus of a precocious, stubborn child for submission.

Last summer, as Herman’s health began to flag, I decided it was time for a second dog. I selected a breeder and put a deposit down on an as-yet unborn litter. Months later, I viewed each newborn via Zoom; Audrey had a white star on her chest, in the same place as Herman. I knew she was mine right away. 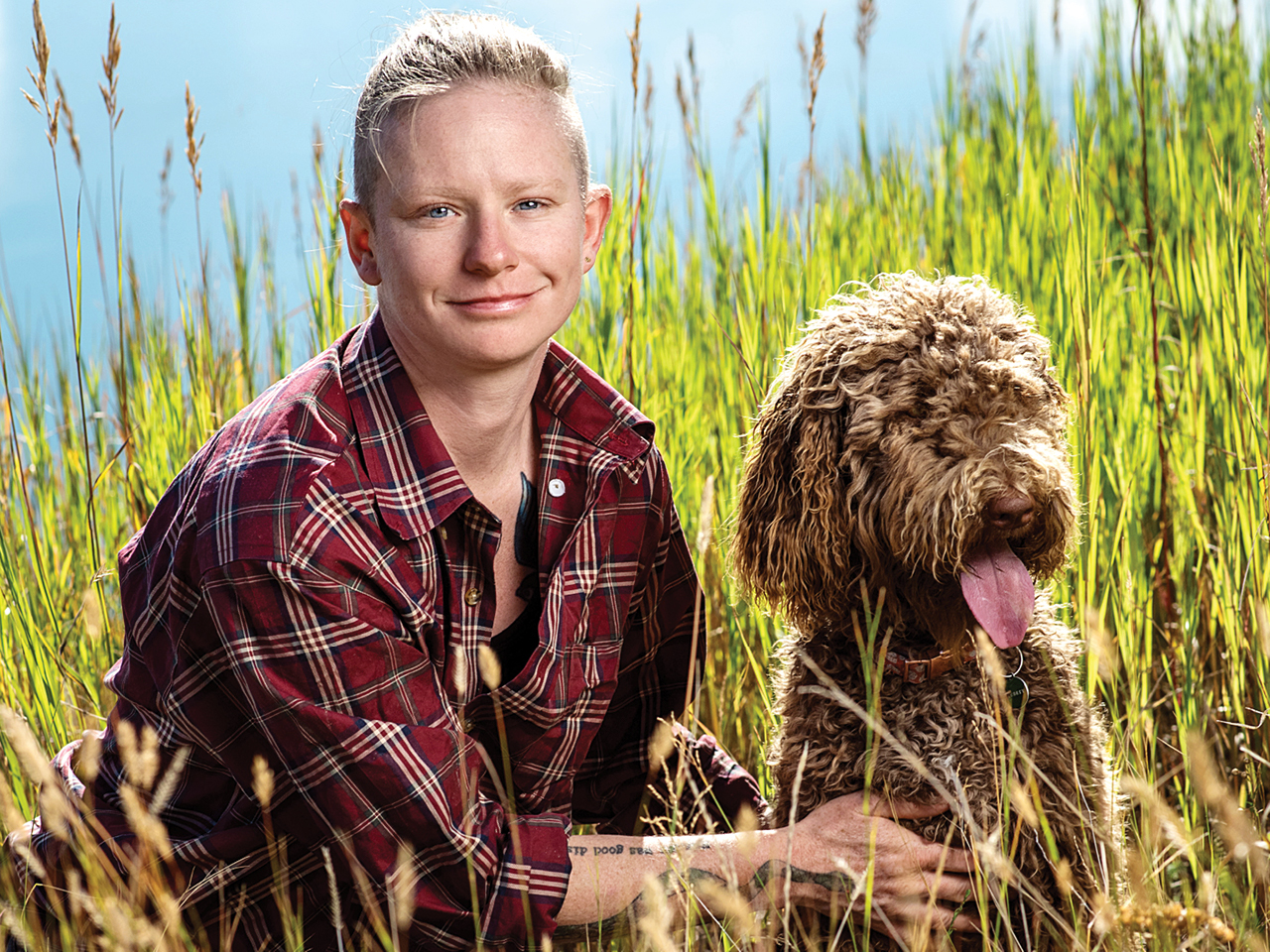 Audrey is hypoallergenic. At the time, this was important, because I was in love—more in love than I’ve ever been—with a woman who adored dogs, but was terribly allergic to them. I carried allergy tablets in my wallet, just for her. I imagined a future with her.

And then, last winter, I got very sick. I was given the wrong medication. It caused a severe nervous breakdown—a psychotic break. It was like being possessed. I said and did things I would never have done while well, things I don’t remember doing. The only per- son physically hurt was myself, but the emotional damage to the people who love me was terrible. When I woke from this nightmare, I found I’d done something unforgivable, and the woman I loved was gone.

It would be easy for me to blame her, to write a version of this story with her as the villain who abandoned me, but that story isn’t true. When I got sick, I went away; all that I was was gone. I’d abandoned her.

It would have been just as easy to see Audrey as a relic of a bitter loss. She was only a few weeks old when I got sick. I was supposed to pick her up when she was 16 weeks, nearly four months away. I could have decided not to take her anymore. But what is easy, I think, is rarely what is good.

That’s how I ended up with Audrey.

A few days before we headed out camping, I’d taken Herman to the vet.

Over the last few months, he’s been unusually tired; he’s developed a limp that won’t go away, is having digestive issues, has lost interest in walks. More and more often, he wants to be alone, sleeping in a quiet corner.

The vet said what I thought she would: Herman is 13, and that’s old for a big dog. Given his symptoms, cancer is probable. He might rally, but at his current rate of decline, he probably only has a few months left.

Herman and I have been a team for 13 years. These have not been easy years. Many of them have been marked with poverty, homelessness and violence. But we made it through our worst days by seeming bigger and scarier than we are, by scraping by when there was nothing left worth scraping.

Sometimes, Herman’s protection was physical; once, while I was working on a ranch in Alberta, a bull got loose and charged me. Herman threw himself between the bull and me, hackles up, snarling and barking. The bull, lathered in sweat, came to a dead stop, snorted, pawed the ground and trotted off to a back field. But more often, Herman’s tremendous, unshakeable love for me was protection enough; when I had nothing else, I had his cool nose against my bare foot.

Even when we had nothing—living in the back of my car, when dinner was a split pack of ramen—we had each other. We have a secret language.

When he’s gone, there will be so much I won’t be able to say anymore.

Audrey’s birth name was Odyssey. It was appropriate: I drove 2,200 kilometres through snow and rain, with a blown wheel bearing and worn-out brakes, to pick her up. It took four days each way, from Masset, Haida Gwaii, to Vancouver and back again.

Money changed hands, paperwork was signed and then it was just me and Audrey, sitting alone in the front seat of my rickety trap of a van. I put on a playlist. Boygenius’ “Me & My Dog” blared through the speakers. Everything stopped.

The woman I loved—the reason I had Audrey at all—would play that song in the kitchen while we cooked. She would make me dance with her, slowly, softly singing the words into my ear as we swayed: “Just me and my dog and an impossible view.” I thought I had deleted it from my playlist.

I held Audrey against my chest, crying harder than I’ve ever cried before. I told her she was “a good girl, such a good girl,” that she was so loved. I cried and held this little creature, a symbol of so much love and faith and hope.

Is it possible to be a new person, with so many hurts and mistakes and accidents? I cried for all the futures I might have, futures I desperately want to be possible.

While I wept with hope and grief and fear, Audrey rested her curly head in the dip of my collarbone, in the same place Herman had placed his own head more than a decade before.

In the tent, I am trying not to cry. Next to me, Herman stirs, slowly rising to stare down at me, some deep thought work- ing behind his luminous eyes. He leans forward with all his weight, his big, broad head pressing hard into my shoulder. I wrap my arms around his neck and squeeze.

Herman stops pushing. He turns in a circle and lies down. His head rests on my hip.

I pull my coat back over him. I’ve left the tent fly rolled up.

There are so many stars.