Kayla Grey Finally Has Her Own TSN Show, The Shift 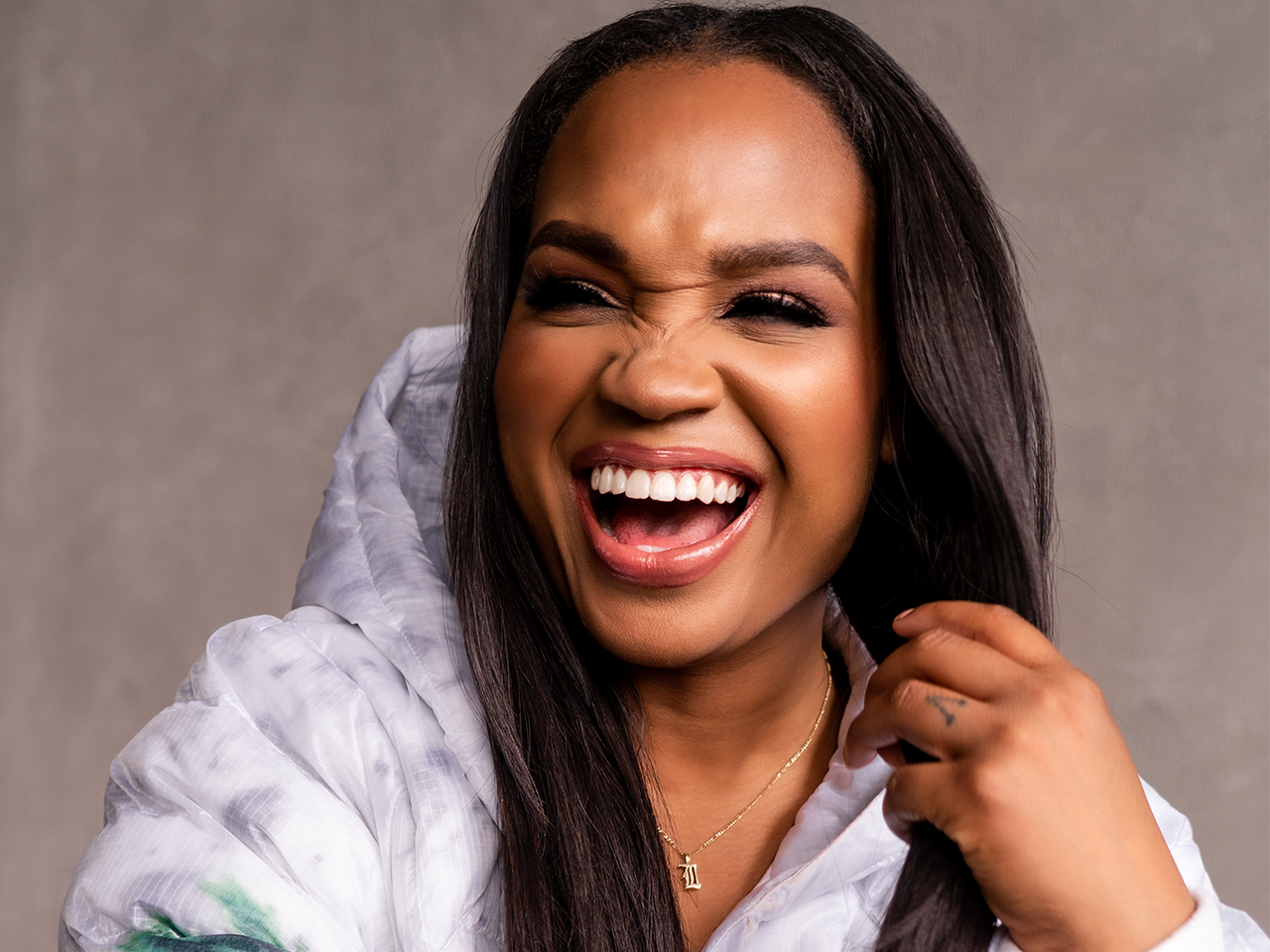 Kayla Grey has a sharp mind and a creative vision that matches her flashy kicks. As the first Black woman to anchor a flagship sports highlight show on a major television network in Canada—TSN’s SportsCentre—she has been vocal about anti-Black racism and the systems of white supremacy that exist in society and within her own industry. Grey has never shied away from the necessary and uncomfortable conversations and she’ll bring her dedication to educating the public to her brand-new show, The Shift with Kayla Grey, which premieres May 13. She is Canada’s fastest rising sports media star, as well as my colleague and a friend.

The dynamic 28 year-old has not taken a traditional path through her career. After leaving home at 15, Grey finished high school at an adult learning centre before attending the prestigious College of Sports Media in Toronto. In her early days, she honed her craft and paid her dues in much smaller markets, such as Winnipeg, Terrace, B.C., and Prince Rupert, B.C. She lived close to Indigenous communities and says that experience allowed her to learn more what smaller communities need from sports reporting. The experience made her more committed to amplifying the voices of racialized people in the sports world.

Grey’s first break at TSN was producing radio—in fact, her original career goal was to pursue producing, not get in front of the microphone. But Grey is a natural presenter and her effortless ability and wit made her a natural voice from the sidelines. The award-winning broadcaster has appeared on lifestyle shows like eTalk and The Social, and been a correspondent for the Amazing Race Canada. In 2018, while she was late in her pregnancy with her son, Levi, she got her shot to anchor SportsCentre. The rest, as they say, is history: Last March 24, she was part of the first all-women’s NBA broadcast program on TSN, during a Toronto Raptors game against the Denver Nuggets. 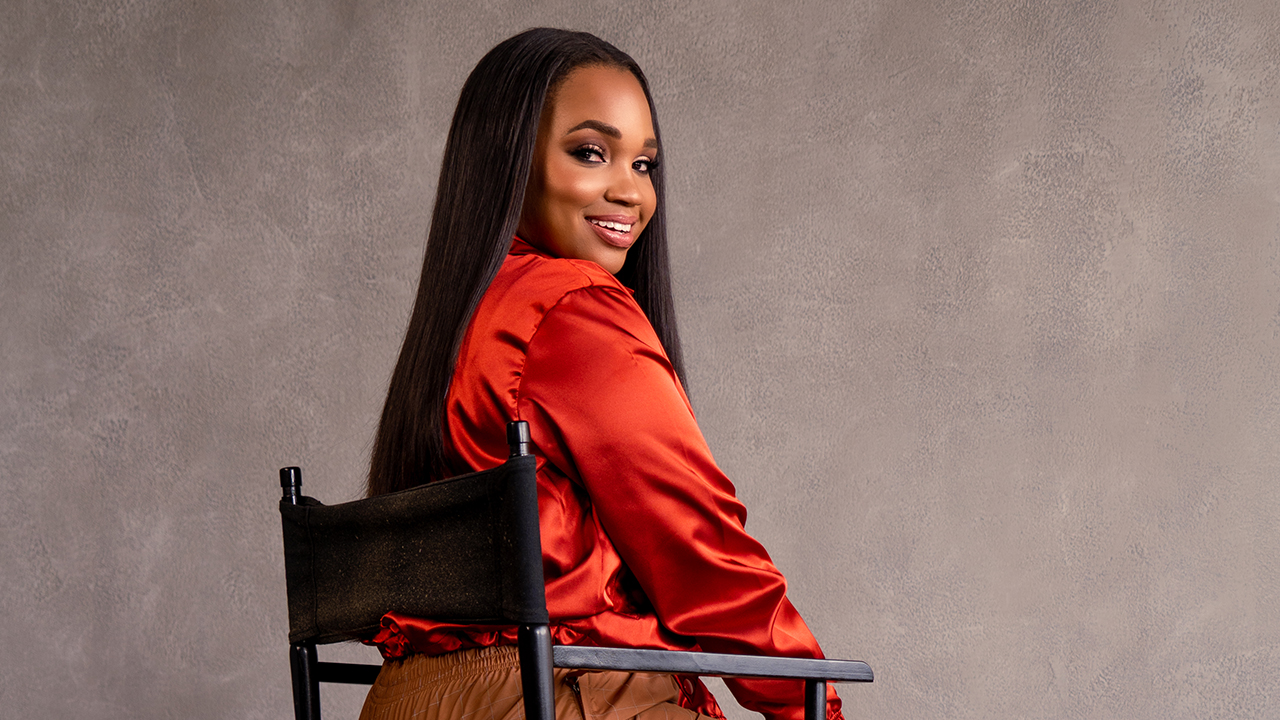 Now, Grey will be on both sides of the lens, as not just the eponymous host of a new show, but co-creator and co-executive producer. The Shift is a program with no rigid structure: It will feature everything from interviews and video essays to panels and even fashion. “We all love an unboxing!” she says excitedly. This makes sense, as Grey is so exquisitely attired: Watching her unbox basketball shoes would be gripping television. “All the sneakers I have worn in the promo photos and ads have been designed by women,” Grey adds. She is well aware of the importance of lighting up those who need it.

Despite her accomplishments, Grey says she felt some trepidation taking on an executive producer role, although the show idea was hers. Sports media is notoriously male-dominated: In 2017, the Women’s Media Center reported that almost 90 percent of sports media in the United States is run by men. Arguably, the numbers for Canada are worse, and the lack of personalities that are Black, Indigenous and People of Colour (BIPOC) is palpable in sports and sports media as well. So while Grey is excited about The Shift, she admits that she feels pressure about what it means to the sports media landscape.

“The idea was born out of what I wanted to see in the industry,” says Grey. “There are conversations that people felt were not getting equal love. These are conversations within sports that we are already having. I just wanted a bigger platform.”

Grey sounds so self-assured and confident that it is hard to recall how turbulent the world of sports media was one year ago after the murder of George Floyd by a police officer in Minnesota. Months of reliving the trauma of lethal violence against Black people in Canada and beyond required an immense amount of emotional and physical labour from Black journalists, including Grey herself. That became acute after another Canadian sports journalist, a white woman, used the n-word in a story about her family: Grey—the only Black woman with a public presence at TSN, called her out.

No matter the context, white people I need you to know that using the n-word is still not okay.

The fallout for Grey was harsh, including ongoing harassment on Twitter by one stranger in particular, but her fandom wasn’t going to stand for it: Led by outstanding Black women, they started a #KaylaGreyAppreciationDay hashtag to lift her up and support her, both online and behind the scenes. Eventually, TSN put out a press release clarifying that Grey had the station’s “full support.”

Remember when @Kayla_Grey rocked braids on TV, making a whole lot of young Black girls feel like they could wear their hair however they want? She’s breaking down barriers every day and @TSN_Sports is extremely lucky to have her #KaylaGreyAppreciationDay https://t.co/scxbawOOLs

Some have argued that the sports media industry faced a reckoning in the wake of Floyd’s death, but according to Grey, it is far more complex than that. “There is an oversexualization of Black trauma in the media,” Grey explains. “There is too much negativity and that weighs heavily on us. I was in a constant state of unconditioning. I just wanted viewers to see who we are as people.”

This is why, she says, a huge part of her show is about holding space for joy. About creating a place where BIPOC feel included, naturally part of the conversation. She wants them to feel this show is for them; they aren’t an afterthought. The Shift will not “tweak and twist for people to be comfortable,” she says. It will be candid, authentic, celebratory, and full of life—much like Grey herself. And that’s something she’s proud of. “I am not going to feel bad asking for my credit, for my due,” she says. “It’s mine.“ Grey’s co-producers, Ken Wong and Craig Chambers, are both racialized men. This time, the burden is not only on her.

Pre-launch feedback has been excellent. “The one thing that has stuck with me was the word finally,” Grey says and then pauses. The word just sits there, holding tremendous importance. “I get to show up as me for my community. I was created by the community and they have shown up for me. It took a community to create Kayla.” And she plans to give backing, to channel her passion and dedication into something tangible for the wider community. “I am the first but I have to make sure that I am not the last,” she says firmly. “I am creating room for more.”

While her show is not for any specific demographic, Grey hopes that it will be a means of (un)learning for many in this country. The Shift will carry authentic conversations about the culture of sports and the immeasurable contributions of Black people to the sports world, offering viewers a fresh perspective. I will definitely be watching, not only for the drip but for the critical engagement, along with celebrating the moments of joy that are long overdue in sports media.

The Shift with Kayla Grey premieres May 13 on TSN.ca