The philanthropic actress talks about her career, passions and why she loves being in her 40s 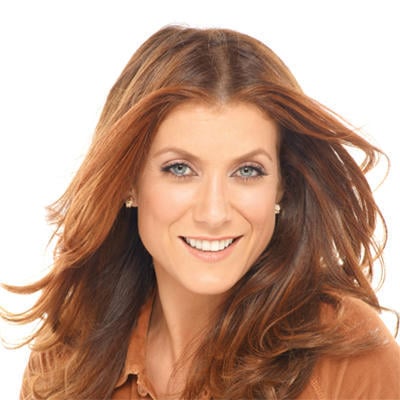 Kate Walsh has been arrested (for throwing a cue ball at a mirror in a Chicago bar), has swum with sea turtles and has done almost every odd job available in her lead-up to becoming one of television’s most successful actresses. Unlike her slightly buttoned-up character on Private Practice, in person Kate is warm, funny and self-deprecating—the type of girl you’d love to have a good gossip with over a glass of wine.

Born in San José in 1967, the youngest of five children, Kate was raised in California and in Tucson, Arizona, after her Italian mother and her Irish father divorced. Early on she channeled her creative energy into acting in school plays and community theatre before enrolling in business studies at the University of Arizona. She quickly switched to political science, then English and finally general studies before, in her words, “I split to go study acting.” She joined regional theatres in Tucson, Chicago, Mississippi and New York. After bit parts in Homicide: Life on the Street and Law & Order, Kate landed a role as one of Drew Carey’s girlfriends on The Drew Carey Show (wearing a fat suit). But it was her turn as Addison, Dr. Derek Shepherd’s feisty estranged wife on Grey’s Anatomy, that impressed critics and audiences. After Kate’s two seasons on Grey’s Anatomy, creator Shonda Rhimes launched the spinoff for the popular actress (and her equally popular character).

True to form even now, with the show soaring into its fifth season, Kate downplays her success: “You think, ‘Okay, I’m on a hit show. When’s this going to end?’” She considers herself supremely lucky. “Yes, I have worked hard but there are a lot of people who work very hard. This is just one of those once-in-a-lifetime deals.”

But as Private Practice began to thrive, Kate faced personal difficulties. In 2008, her 14-month marriage to film executive Alex Young ended. It’s no surprise she’s not keen to discuss her private life. “How about I talk about relationships in a vague philosophical manner?” she says good-naturedly. “I feel like part of the lesson I’ve learned in having my life go from private to public is I had better not talk about everything!” She pauses and then offers this insight: “We no longer use rotary phones or trolleys. How can we think that romance is going to be the same? There’s been no rule book since the 1950s. What are our roles? None of us has the instruction manual. We’re socialized with this fairy tale that you meet someone and you live happily ever after, and we live in a culture where everything is hypersexualized.”

Still, Kate hasn’t let her divorce dampen her boundless enthusiasm. She lives with passion. “I have this unending hunger to try everything in life,” she says. “It’s almost like a deadly sin.” Last year, she launched her beauty company, Boyfriend LLC, and earlier this year she released a fragrance line of the same name. In 2008, she campaigned for Barack Obama, and she volunteers with multiple charities like Oceana, the organization focused on protecting the planet’s seas.

Because she’s frequently overextended, she’s had to amass something of a mini-army to manage her life. The soldiers affectionately dubbed Team Walsh do everything from running the Boyfriend company and Twitter account (133,000 “Walshies” and growing) to scheduling her engagements and helping with the laundry. They also helped her avert potential catastrophes her felines ripping the brand-new furniture to shreds by suggesting she put vinyl nail tips on her orange tabbies, Pablo and Billie, a.k.a. William E. Pants. “It’s a very Hollywood thing and a little embarrassing,” she laughs. “It did not work. The cats popped them off like it was a cartoon: tink, tink, tink, tink. Varoomp. ‘Thank you. We’re done; we’ll be back later.’”

After a brief summer hiatus (she spent two weeks in Greece without her BlackBerry), Kate is back on the Los Angeles set of Private Practice, where she’s rehearsing for the fifth season. Her character, Addison Montgomery, a neonatal surgeon, is talking with Jake Reilly, a fertility specialist, played by Benjamin Bratt, who she says is “just fabulous and wonderful.” She won’t give away the plot line but does reveal that she’s making her directorial debut in the 20th episode. “It’s terrifying. I’m telling you in case I chicken out. It makes me accountable.”

Another first for Kate is playing a mom. In the 2012 film The Perks of Being a Wallflower (based on the book of the same name), she has to guide and support her troubled teen, played by Logan Lerman. “It’s a period piece in the sense that it’s set in the 1990s! As soon as I put on my mom pants—which were fabulous— I was in character,” she hoots.

Asked if she intends to have children in real life, she responds: “I would like to be a mother in some form. There are many ways to be a mother, not just literally but figuratively. We’ll see what life brings.” Years ago, life brought her to Planned Parenthood, where she’s currently a board member. Kate was uninsured for most of her 20s. (Before President Obama signed the Affordable Care Act into law in 2010, many health plans removed anyone, even students, aged 19 and up from their parents’ policies.) “Planned Parenthood was where I’d get all my gynecological exams as it was the only affordable place. It’s very near and dear to me to know they take care of women,” she says. She finally acquired health insurance via the Screen Actors Guild in her 30s.

Another current cause is the U.S. Army. Two weeks before our interview she was seated in business class on a Delta Air Lines flight when several soldiers boarded. “The shock of that, seeing these enlisted guys shipping out to war, it hit me in a very visceral way.” Her father, who died several years ago, was a Korean War veteran. “This is a segment of our society that is not being served properly.” She’s exploring the idea of establishing her own organization or working with an existing one to help soldiers transition back to civilian life, including getting access to adequate health care. Often when soldiers return with severe injuries, such as loss of limbs or sight, they don’t receive enough financial aid. “Making sure they get their benefits when they come home has become one of the biggest concerns of my life.”

Where do her motivation and passion come from? She can’t pinpoint one thing but says, “I think I’m stealing a line from the show when I say that I feel the magic is in having ideas and goals and seeing what each day brings.” But, ever down to earth, she quickly clarifies, “It’s not about getting a lot done, it’s more about experiencing a lot of life. And I have a hard time saying no!”

Time has brought about wisdom, though Kate is celebrating her 44th birthday on October 13. “The older I get, the more at peace I am with myself. I love being in my 40s. In my 20s and 30s I was working and struggling as an actor, waiting tables half the time and trying to get to somewhere else,” she explains. “And now I feel like I’m actually happy where I am. I think that happens the older you get.” Then she mocks herself, saying that she’s “crumbling” a little every day. “Oh, my knees hurt more when I ski.”

Kate lives in Los Feliz, a trendy neighbourhood near the Hollywood Hills, which allows her to take frequent hikes in nearby Griffith Park with her rescue dogs, “Rosie” Perez and Lou “Lucy” Diamond Phillips. She loves Pilates and recently took up golf. “It’s very addictive, even if you suck at it like I do.” She nourishes her body and mind and forsakes extreme diets. “I love cooking dinner and drinking wine with friends—I’m not a gourmet cook, though.” She rolls her eyes about a juice cleanse she did this week–her first and last. “It was too much for me. I lasted a day. I mean it ain’t poverty or war, but it sucked.” As we’re talking, she chomps on a favourite work lunch: mixed greens, tuna, lentils, brown rice, avocado and almonds with toasted sesame oil. “I call it the Kate salad.” At home and work, she practises Vedic meditation, which involves repeating a silent mantra for 20 minutes twice a day. “The beauty of it is you can do it anywhere.”

Now she’s being called back to the set—at the moment, they’re working 16-hour days in the studio, with wardrobe fittings on lunch breaks, and doing press on weekends. “Oh, God, I have to rehearse now or they’re going to fire me off my television show.” As we say goodbye, Kate deadpans: “In an alternate universe, I’m in bed all day reading, wearing cut-offs, a T-shirt and flip-flops at the beach. And my bed would be on the beach.”

Q: What is the last great book you read?
A: A Visit from the Goon Squad by Jennifer Egan.

Q: What part of the world is next on your list?
A: Mexico.

Q: What is your guiltiest pleasure?
A: Shopping.

Q: What is your favourite comfort food?
A: Potato chips and chicken cutlets.

Q: Who has been the most influential political figure for you?
A: Mother Teresa.

Q: Who do you consider a misunderstood historical figure?
A: Jesus.

Q: Who or what makes you laugh the hardest?
A: Everyone in the hair and makeup trailer. We laugh constantly.

Q: What’s your favourite swear word?
A: F–kertown. I made it up. It’s very satisfying; try it.

Q: What’s the most exciting part of your job? And what’s the most tedious part?
A: Getting to work with amazing actors, writers, producers and crew; they are the best ever. Nine straight months of shooting . . .

Q: What is the worst piece of advice you’ve been given?
A: Someone once told me I should steal my grandmother’s car.

Q: What song do you sing in the shower?
A: “Cheers (Drink to That)” by Rihanna.