How these business partners balance fame and family life 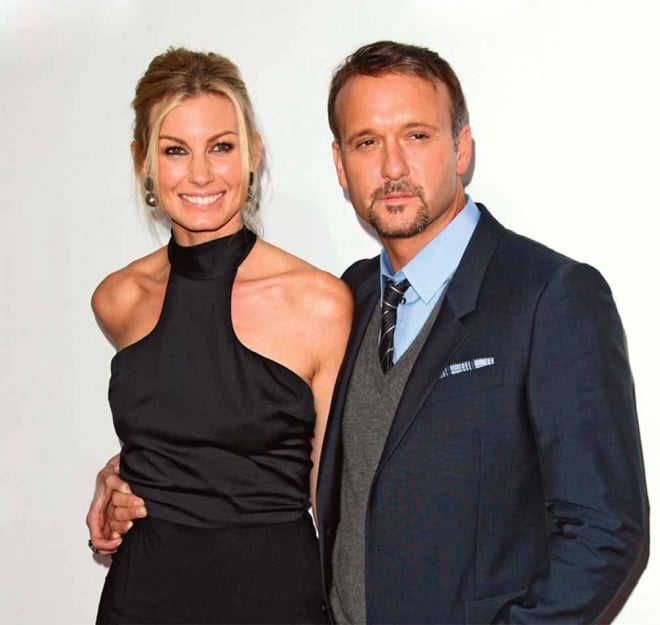 On the screened-in veranda of their folksy farmhouse, munching on homemade fried chicken and mac and cheese, Tim McGraw and Faith Hill poke fun at each other like high school sweethearts.

“They don’t like my music,” jokes Tim of his three boisterous daughters.

“Yes they do!” insists Faith, playfully batting his forearm. Tim shakes his head with mock seriousness: “They make fun of me every time I come on the radio.”

The couple invited us into their home to launch Soul2Soul, his-and-hers fragrances that mark the latest in a growing line of professional collaborations between the two, whom many consider the king and queen of country.

Tim and Faith – both 44 – appear to have struck a healthy balance between fame, family and old-fashioned southern humility. Faith repeatedly suggests that they take us all ATVing around the property despite the fact that she’s dressed in a tight black cocktail dress and five-inch heels.

But when it’s time to talk work and love, the two get serious. “Our personal life and our work together are two very separate things,” says Faith. “We have incredible respect for one another, and that helps when we’re pitching ideas back and forth.” Tim and Faith together actually make good business sense: The new fragrance takes the name of the couple’s most successful tour, which also happens to be the most lucrative country music tour of all time.

Tim nods as he watches his wife speak. “We agree to disagree when we’re working together,” he says. “There are certain things that she likes that I don’t like and vice versa, and you have to know that about each other, and then it’s cool. That being said, we generally go down the same road with what we do together musically. And in the times when we have pushed and pulled a little bit, it makes it even better.”

They do push each other – and themselves. “Hard work is definitely part of my philosophy,” says Faith. “You have to follow your heart, although sometimes it’s not always the safest or easiest path to walk.”

And this thinking, which her husband shares, has made them perhaps the most recognizable couple in Nashville, Tennessee, America’s country music capital. Ask anyone wearing a cowboy hat on the downtown honky-tonk strip about Faith and Tim, and they’ll smile and mention the hometown heroes’ rustic property on the outskirts of town.

It’s a fame that draws on the wisdom of past masters. “Johnny PayCheck gave me my best advice,” says Tim. “He was a country singer in the ’60s and ’70s, and he was hard livin’. We were on a bus before he died, and I asked him what kind of advice he would give to a new country singer – I was new at the time. He just looked at me and said, ‘Son, always go hard and fast so that when you hit the ditch you can come out the other side.’” Faith nearly falls out of her chair laughing, and Tim looks pleased as his giggling wife tries to compose herself.

When asked if humour is a key tool for diffusing tension in their relationship, Faith says: “Always. I think that’s a good motto for life in general.” Tim smiles and adds, “There’s tension?”