I Live In A Small Northern Town And Bought An Electric Car. Here’s What I’ve Learned

''The biggest question, I think for northerners, is 'how does it work in the winter?' 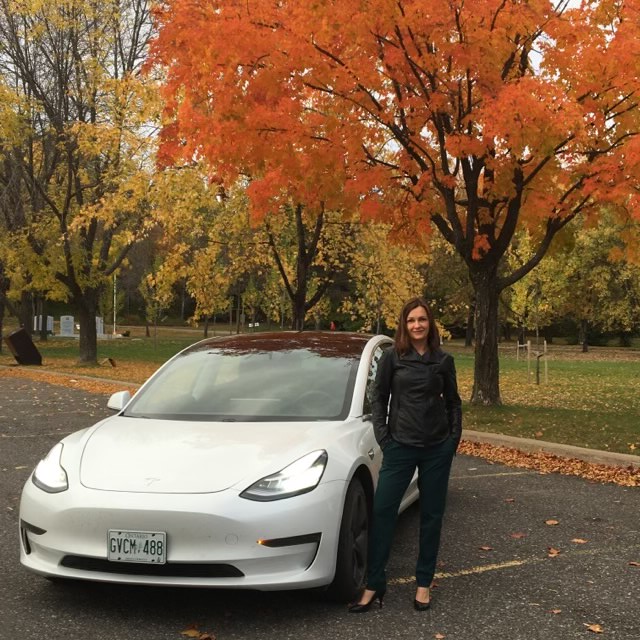 Laura Mason took the plunge and bought a Tesla Model 3 Standard Range Plus. Now she’s encouraging others to buy an electric car.

Laura Mason has never really been a “car nerd”. As someone who often drives long highway distances along the north shore of Lake Superior year-round, reliability and safety have really been her only concerns.

About 15 months ago, Mason found herself at a crossroads. She was ready to buy a new vehicle, but she couldn’t bring herself to purchase yet another gas guzzler, jump-starting her journey to find just the right electric vehicle.

“I just wanted to buy a green vehicle because I’m worried about my daughter’s future,” said the 40-year-old high school teacher. “I just want her to live in peace, safety, and prosperity, and honestly, if we don’t stop the climate crisis … she won’t.”

For Mason, buying an all-electric vehicle (EV) and completely ditching gasoline seemed like the most feasible way to make a meaningful difference in her carbon footprint. After all, transportation remains the second-largest source of greenhouse gas emissions in Canada, closely following the gas and oil sector, according to Transport Canada.

Deciding to buy an electric vehicle was a start. Still, Mason knew the next steps in actually getting her EV on the road would take some research. While there are dozens of makes and models of zero-emission vehicles on the market, Mason was limited to what was available in her small hometown of Terrace Bay, Ont (The closest city hub of Thunder Bay, Ont., is still over 200 kilometres away).

Early on in the process, Mason learned there were only about three electric vehicles—the Hyundai Kona, the Kia Niro, and various Tesla models—that she could buy with the option of having them serviced in the Thunder Bay area if needed.

Mason took to YouTube, community forums and even met with an owner of a Tesla to help her make her choice. She pondered questions about affordability and cost efficiencies, the ease of charging at home, and the battery range of some vehicles, which she refers to as “range anxiety.” She researched the overall battery life of an EV—which are estimated to last anywhere between 10 to 20 years depending on the make, before it needs to be completely replaced.

Mason had to consider all these questions as someone who endures the harsh northern Ontario winters, where temperatures dip near 30 below, and massive snow dumps and blustery storms are a guarantee for almost six months of the year. It’s a climate that can be hard on any vehicle, electric or not.

“The biggest question, I think for northerners, is ‘how does it work in the winter?’ For example, people know Tesla as a brand that’s made in California. And is this California car going to survive up here?” she said.

Through her research, Mason landed on a Tesla Model 3 Standard Range Plus, of which she has now been the proud owner for about 15 months. One factor in her choice was a mobile maintenance option. This option allows her to book an appointment with a service person who will make a trip to her driveway if she needs a mechanic. So far, Mason has put this service to use once when she needed a faulty rear light swapped out. Otherwise, she’s had no mechanical problems since.

Sorting out the cost

In Canada, the cost of newer electric vehicles generally runs from from $30,000 to over $100,000. The current cost of EVs remains a barrier for many people looking to make the switch. Still, for Mason, the long-term savings and eco “peace-of-mind” she was searching for outweighed the the upfront cost.

Mason said she’s already noticing savings when it comes to fuel costs. In the past she would gas up weekly, costing about $50 each time. Eliminating this weekly cost saves her about $200 monthly, and in the long run, she says, will result in about $2,600 saved per year on gas. Plus, she was keen to use the government’s zero-emission vehicles incentive program. Since 2019, many different models are eligible for rebates of up to $5,000, something that Mason’s Tesla qualified for.

Mason ditched her weekly gas station routine with the purchase of her EV, but now her new reality includes stopping in at public superchargers. Teslas can be charged at branded superchargers, other networks of compatible public chargers, or they can be charged at home. Plugging in at a supercharger, which looks like a futuristic gas pump in some ways, usually costs Mason about $12 to $15, but charging her vehicle at home has been the most cost-effective at around $4 per charge. She said she barely notices a difference on her electricity bill since buying her car.

Heading into EV ownership, Mason said she anticipated the charging process being the most significant sacrifice, since it would take about four hours to fully charge at home and up to half an hour at a supercharger. However, in the year and a half Mason has owned her Tesla; she says the ease of the charging experience has pleasantly surprised her. Mason said she’s never had an issue with finding a charger in the wild, especially with in-car technology that helps to find them.

“There’s several around town, but you wouldn’t know about them. They’re inconspicuous. But they’re there, and they’re starting to pop up,” she added.

The battery in the Tesla Model 3 Standard Range Plus is rated as a 400-kilometre battery, meaning it can be driven that far before needing a charge. However, Mason said the range of the battery is actually closer to 350 kilometres, since it’s recommended not to completely drain the battery or to completely charge to better preserve the car’s long-term battery life.

Waiting for a charge might take up to 30 minutes at superchargers, but for Mason the wait has never been an issue and usually affords her some time to grab a coffee nearby.

Most of the charging for Mason happens at her own home. She’s spent around $30 on extra hardware to have a 240-volt outlet installed by an electrician, similar to what you would plug your stove into. Adding this outlet allows her to more efficiently use an at-home Tesla charging adapter she’s purchased. Mason also made the decision to purchase a Tesla wall connector charger after purchasing her vehicle, which cost around $700, not including electrician fees which bumped the total cost of the installation to around $1000.

Being garage-less, especially in the harsh winter climates of northern Ontario, Mason was worried the charging experience outdoors might get tricky. But with a weather-proof box for her electrical outlet, she’s yet to have a problem.

Being pleasantly surprised with the ease of the charging process wasn’t the only added bonus of making the switch for Mason. She’s also been surprised by the “hardiness” of her Tesla and the way it handled its first winter. Not having to wait for an engine to heat up to access in-car heating in 30 below weather, or even just the effectiveness of the rear-wheel drive traction on slippery roads were some stand out features for Mason.

“There’s a lot of people who believe that electric vehicles aren’t ready for the north and I just experienced a year of it really being ready,” she said.

Mason added she’s been exposed to a whole new community of electric car owners, both online and in-person. She said learning from the experiences of others is what has given her the confidence to make the leap, something she’s hoping to do for others now too with an Instagram account dedicated to electric vehicles in the north.