How to get along with your partner's ex-wife

I like designer bags but I don’t necessarily like baggage. Not the “ex” kind of baggage. At my age, it’s more likely than not that anyone I would date/end up with has baggage. It's a term I don’t like because when you find the right guy, his baggage doesn’t seem so much like “baggage” as it does a “pretty package.” 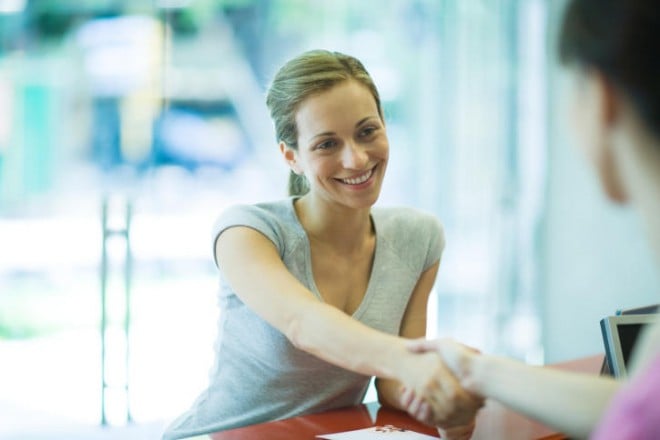 At my age, it’s more likely than not that anyone I would date/end up with has baggage. It’s a term I don’t like because when you find the right guy, his baggage doesn’t seem so much like “baggage” as it does a “pretty package.”

For example, before I met the man I’m now dating, I made it perfectly clear to any man I went out with that I come as a package. If you date me, you’re also, for lack of better description, dating my daughter. Meaning, you have to get along with her, she has to like you, and you almost certainly will be my second priority.

When you have a child, it’s easier to date someone else who has children. They usually understand if you have to bail at the last minute because your child is sick, they like children (because they already have them), and they understand why a child can turn from an angel into a sobbing heap on the floor within 10 seconds.

But what I’ve never quite understood is the baggage that is known as “the ex.” Rather, I understand it; I just don’t like to deal with it.

One of my exes had an ex-wife who acted as if she were still his wife. They had no children and it was hard for me to fathom why this woman would still want to go out of her way to decorate his place, ask him to drive her to the airport, and buy him flowers. There is nothing worse than an ex who doesn’t realize she is an ex (at least for the person dating the man/woman.)

The man I’m dating now has gorgeous, kind and sweet children. I thought God was looking down on me, finally, when I fell in love. Plus, his ex lives a 40-minute drive away, is not in my social circle, and we didn’t have any friends in common. (My boyfriend is lucky in the sense that my daughter’s father lives in another province.)

But, of course, I was a little naïve. I recently found out that this ex is following my every move on Facebook — which is fine, because, seriously, aside from saying “hi” to your best friend when you were seven, what else is the point of Facebook? (Even I admit to “creeping” around sometimes.)

Still, it makes me uncomfortable, especially when exes of the man I am dating, or the men I have dated, check me out. My boyfriend and I are serious, to the point where we both would like to be included in every aspect of each other’s lives. This includes school plays (which he attended with me when my daughter was recently in one) to birthday parties. One of his children has an upcoming birthday party. As we slowly blend our families together, I don’t want there to be any drama.

My ex’s ex-wife (the one with no children) actually wanted to meet and hang out with me. My response was, “Why?” But if I do plan on being a stepmom with my new man, I do understand why I may have to meet my boyfriend’s ex-wife. Do I want to do this? No. Do I think if we can get along at least politely it will be best for the children? Absolutely. Does she have to like me? No.

But if my ex was/is dating another woman who could possibly be my daughter’s stepmother, I would for sure want to meet her, at least once, to make sure that my daughter is safe. My daughter, her safety and her happiness, will always be my first priority, just as I’m sure that’s my boyfriend’s ex-wife priority.

But I can’t help but feel guarded. Still, I do have to make nice with this woman, for my boyfriend’s children’s sakes, and for my boyfriend. So I talked to Heather Hetchler, of Cafe Smom, a site for stepmothers to find support, discuss issues, and help each other through the ups and downs of being a stepparent. Thousands upon thousands of readers have chipped in and found solace in her site. She is the mother of four and has two stepchildren.

1. Hetchler says that ex-wives and new wives don’t necessarily have to be friends. “I think it’s best to be amicable though.” She also says, for those that are worried about the ex, that many people on her blog live by the motto, “She’s an ex for a reason.” Although she does admit there is a movement now of women trying to become friends with the ex-wife.

2. As for the FIRST meeting of the ex-wife, she says to not have “any expectations.” “It will never go as you work it up to be in your head,” she advises. She says the more casual the meeting the better, along the lines of “It’s nice to meet you. I’ve heard good things about you.”

3. She says that whether I, or any woman who is in a stepmother position, like it or not, the mother sets the tone for the relationship she will have with you. Meaning “They may slam the door in your face, or just say ‘hi’ and never look you in the eye again.” It’s important to somehow let her know that we have no intention of or desire to replace her as a mother. Your man can help out by introducing you casually, if he comes to pick you up. “But let the mother lead how the relationship is going to be.”

4. She says it’s a hot topic when it comes to events like birthday parties and whether it’s cool for stepmoms or new girlfriends to come. “If we’re told we can’t come, of course we’re going to want to,” says Hetchler. She believes that it may be better to just say to your husband/boyfriend, “It’s your time with your kids and we’ll celebrate their birthday another time together.”

5. If the ex is crazy, or at least engages in crazy-like activity, it’s simply best not to engage, she says. “You can’t fight crazy. You have to remember that. I do think it’s healthy for your own relationship not to always talk about the exes. It takes time away from your connection.” So if your boyfriend/husband always tells you about what the ex-wife is doing, or has done, maybe you should have a chat and set boundaries about what you want or don’t want to hear about.

6. She says there is no “cut-and-dry” format for stepparents. “I always say that if every stepmother was right about the ex and the ex was always right about the new wife, then there would be no nice women in the world,” she says.

So, there you have it. I may have a door slammed in my face. But, above all, I will not take things personally. Or if I do, I’ll just head to Cafe Smom to rant!

Do you know anyone who has been able to form a healthy relationship with their partner’s ex? Or even become friends with her? Share your thoughts here.

Follow me @rebeccaeckler and How To Raise a Boyfriend