Why You Should Consider Giving Up Toilet Paper

It turns out the the water-conscious, sensitive skin–friendly bidet doesn’t just feel good—it can do good, too. 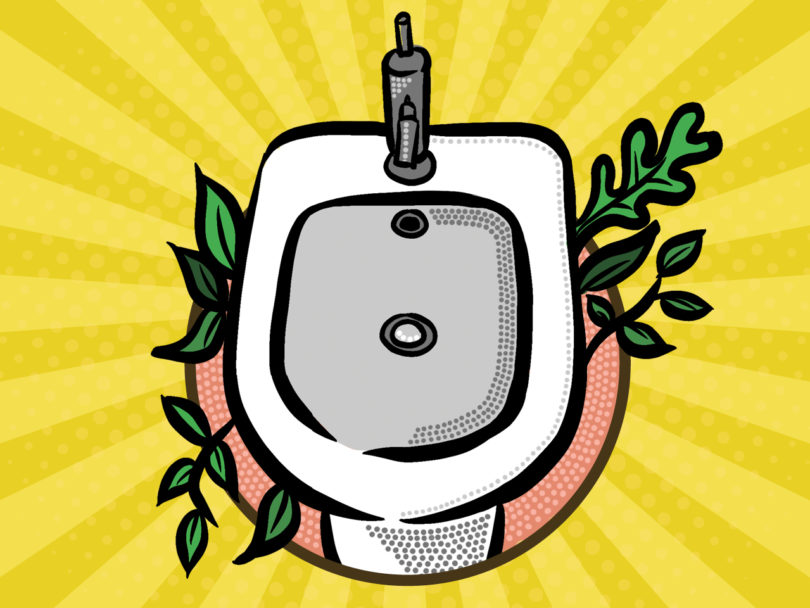 Danuta Valleau can’t remember the last time she bought toilet paper. The rolls that are stocked in her southwestern Ontario home, located in the Georgian Bluffs, are primarily for the comfort of her guests—and she’s often amazed by how much is used when people visit. A family of four who recently stayed over for two days flushed away nearly six rolls, she recalls. But for the 67-year-old, the number-one choice after number two isn’t wads of toilet paper, it’s water—a switch she and her husband, Michael McLuhan, made after learning how crappy (sorry) toilet paper is for the environment.

Making lifestyle changes to be more green is nothing new for this retired couple. Valleau always carries a reusable bottle and coffee mug, avoids purchasing produce wrapped in plastic or other products with too much packaging and describes her husband as a “recycling genie” who meticulously separates discarded items to minimize waste. After reading an article about a man who went TP-free, it was McLuhan’s idea to give up the roll—and Valleau was game.

Bidets have come a long way since decorated wash basins were introduced in 1600s France. While stand-alone bidets, meant to be straddled and used to bathe the genitals, perineum and anus, are still used, today the term also applies to a water spout that is built in, or attached, to the toilet and is designed to shoot water—either cold, as is the case with less-expensive options, or warm—at the user’s undercarriage.

“It’s actually much cleaner than using toilet paper,” Valleau says of her experience using the $41 cold-water bidet attachment they purchased on Amazon and installed themselves a couple of years ago. And it turns out that washing rather than solely wiping—a common practice among Muslims and in many parts of Asia, the Middle East, Europe and South America—doesn’t just feel good, it can do good.

Canada’s boreal forest, which covers almost 60 percent of our country, is the most carbon-dense forest ecosystem on earth, each year removing 24 million cars’ worth of carbon dioxide from the atmosphere. According to a 2019 report from the U.S.-based Natural Resources Defense Council (NRDC), by using toilet paper we are literally flushing those resources down the toilet.

Throughout history, we have wiped using everything from hands to leaves, grass, snow, moss, corncobs (apparently softer than you might think) and water. The Farmer’s Almanac was so frequently hung from a nail in bathrooms and outhouses, functioning as both reading material and waste removal, that in 1919 the publisher started pre-drilling a hole in the corner. Toilet paper originated in China and was introduced in the U.S. in 1857, but it didn’t take off initially because of the stigma around discussing bathroom habits. It wasn’t until the 20th century, when companies began marketing TP around the idea of femininity, hygiene and absorbency, that the customers started . . .rolling in. (Sorry again.)

The tissue market is now the fastest-growing sector of the paper industry and shows no signs of slowing down. But in order to produce these products, which the NRDC explains are primarily made from “virgin” rather than recycled pulp, companies are wiping out our ecosystems, threatening Indigenous people’s traditional territories and affecting wildlife like the boreal caribou, whose population has declined at an estimated rate of 30 percent every 18 years. The NRDC report highlights that, in addition to using toilet paper made from recycled materials, bidets “could considerably slow forest degradation.”

When Valleau tried to switch to recycled toilet paper a few years back, she was frustrated to discover that the “made from recycled material” label sometimes only referred to the outer packaging, not the tissue itself. Water, sanitation and hygiene expert Sayed M. Nazim Uddin says not knowing what goes into our toilet tissue is part of the problem—particularly since companies use bleach to whiten, strengthen and soften these products. “Normally when you buy food, the ingredients are written [on the packaging], but these chemicals aren’t written on the toilet paper,” he says.

The process of bleaching toilet tissue releases toxins into the air and water, which the NRDC reports has been shown to harm fish, animals and people. There are reported cases of skin irritation caused by these chemicals—and they don’t disappear once they are flushed down the toilet. Uddin says when chemicals that are used to make paper feel softer than a luxe sweater are released into the water, it pollutes the entire ecosystem.

“Toilet paper has high impact if you consider all other residual issues or effects,” says Uddin, a visiting research associate at the University of Victoria who is based in Bangladesh, where a small water bucket called a bodna (known in other areas as a lota) is typically found next to the toilet. And even though it may seem like a bodna or bidet would increase water usage, he says it will never have the same environmental impact as using toilet paper—particularly since, in the U.S., producing toilet paper requires an estimated 473 billion gallons of water per year. Uddin personally uses water, and he believes that Canadians at large should rethink their water closet customs for both health and environmental reasons. “Using water is quite a bit better for the environment and human health than toilet paper.”

Bidets were a fixture in Jenny Rodrigues’ childhood home. Her parents worked as the distributors of a large Korean lifestyle brand, which among its many products included a heated toilet seat that played a chime, sprayed warm water from an attachment with adjustable pressure and finished by blowing warm air—no tissue required. As a kid growing up in Richmond Hill, Ont., Rodrigues enjoyed the heated seat, but avoided the bidet function.

“Like most North American kids growing up, I thought that was weird,” says Rodrigues. “It freaked me out that you would shoot water at your nether regions. I didn’t understand the point of it because I was like, ‘You have toilet paper.’ ”

It wasn’t until she gave birth that she gave the bidet a second look. Women who deliver vaginally are sent home with a small squeeze bottle—or, as Rodrigues describes it, a “very low-tech bidet”—which helps to wash urine away from any tears in the skin and keep the area clean, rather than wiping the wound with dry toilet paper. Rodrigues found the bottle difficult to manoeuvre and realized that it was finally time to make use of the bidet.

Having a bidet attachment already installed (ever the enthusiasts, her parents had given her one), she adjusted it to the lowest pressure setting and gently wiped away excess water with TP before using the blow-dryer setting to finish. As Uddin explains, water is known as a universal solvent; it’s effective, whereas there may still be residue after using tissue. Just think about the difference between washing chocolate ice cream off your hands with water compared to wiping it with a paper towel. Rodrigues had heard that the hands-free bidet was more hygienic than toilet paper; it turns out, there is some truth to that.

That said, even the softest toilet paper can start to feel irritating for those with gastrointestinal issues, such as chronic diarrhea. (Consider what it’s like when you have a cold and are constantly blowing your nose; eventually, your nostrils are left dry and irritated. The same goes for your butt.) For patients who use the bathroom frequently or have certain skin conditions, such as symptomatic hemorrhoids, Selk says using water can provide relief.

That’s one of the reasons Victoria-based plumber Mary-Anne Bowcott got a bidet. “It definitely made things a lot easier and a lot more comfortable for me rather than using super dry toilet paper all the time,” says Bowcott, 33, who has a history of stomach issues. While she’s seen increased demand for bidets and bidet attachments, it’s still not “crazy popular” in Victoria. Leah Adelman, a 41-year-old plumber in Saskatoon, agrees that toilets with built-in bidet functions are becoming more common, which she figures is due in part to the aging population as well as people travelling and experiencing bidets overseas.

Barbara Penner, a U.K.-based architecture professor and the author of Bathroom—which explores the evolution of the water closet—says there has always been an interest in “toileting” habits around the world, and with increased access to travel in recent decades, more people are experiencing these customs. She sees high-tech toilets with built-in bidet functions becoming aspirational in the same way that, historically, indoor plumbing was once a status marker. During a pre-pandemic visit to California, her host showed off their Japanese toilet as their home’s pièce de résistance. Celebrities have also spoken of the beauty of the bidet, or in some cases, simply using water. Comedian Hasan Minhaj said the one item he couldn’t live without is a lota, SNL’s Michael Che said getting a bidet attachment was “life-changing,” and author Judy Blume called her electronic bidet toilet seat her “greatest luxury.”

With products ranging from $41 attachments that can be bought online to thrones that cost thousands of dollars, making the switch is doable at a variety of price points—but Bowcott and Adelman advise only purchasing products that have earned the Canadian Standards Association stamp of approval to avoid any plumbing issues.

It may be a while, though, until we see a bidet in every bathroom. Penner says that bathroom design evolves slowly due to ingrained habits: When indoor plumbing was introduced, people often still used chamber pots because it was habitual. After healing from childbirth, Rodrigues returned to only using her bidet’s seat warming function, partly because the bidet takes longer—but it’s also what she’s used to.

Ditching TP took Valleau some getting used to, but it is now a part of her routine. “The balance has tipped from trying something new at home . . . to preferring the bidet concept and reluctantly having to use toilet paper elsewhere,” she says. She thinks about the environmental repercussions every time she wipes. Meanwhile, Bowcott’s CSA-approved bidet toilet seat, while not cheap, was a game-changer.