How To Wrap Your Gifts In Reusable Fabric, Furoshiki Style 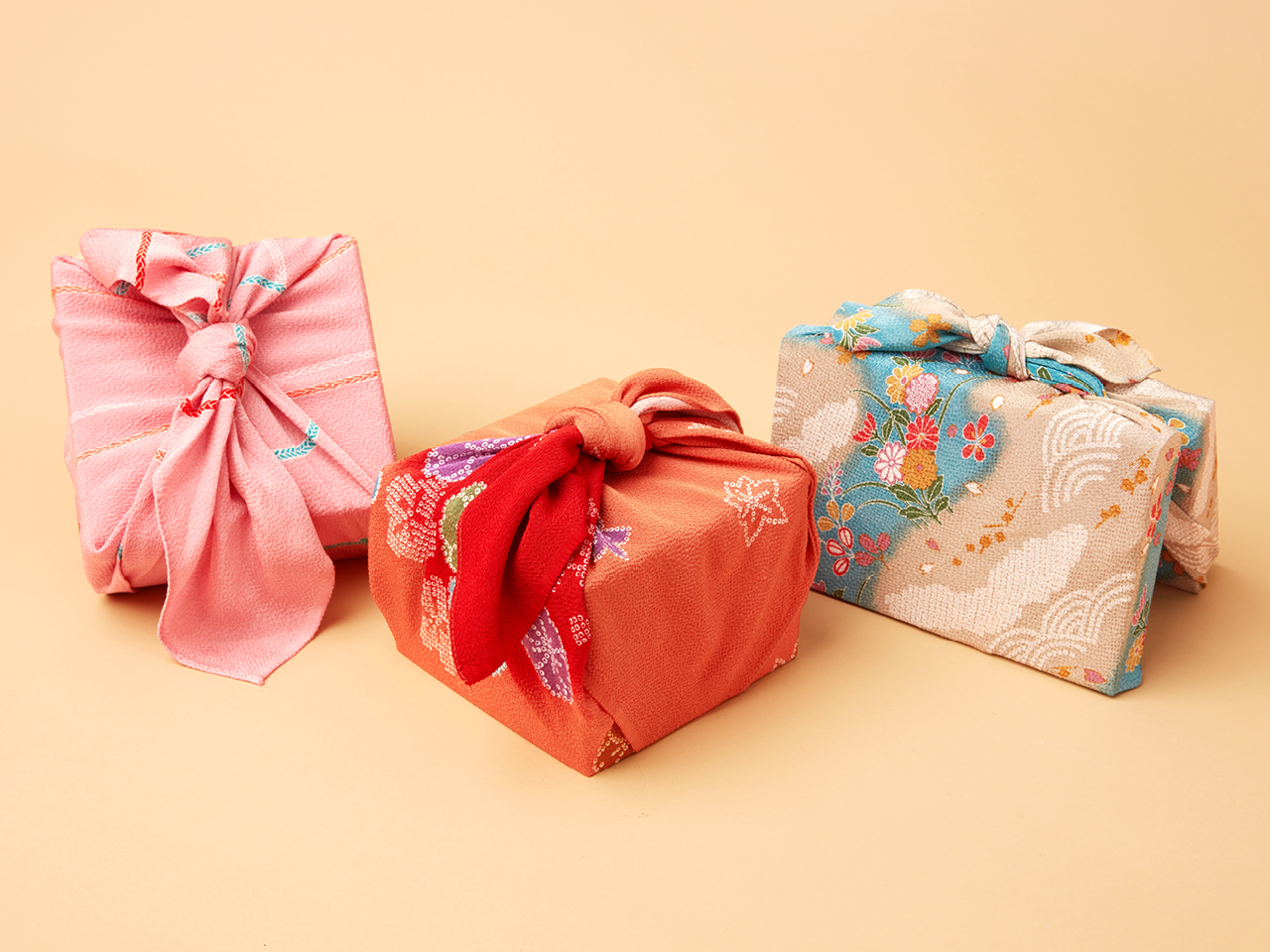 The moment I knew for sure that Santa wasn’t real was when I was 9, and heard the squeaking sound of my mom running out of tape, wrapping presents late into the night. Thankfully, you can avoid this telltale holiday reveal with a wrapping tradition that’s also a beautiful way to reduce the single-use waste of wrapping paper. Japanese furoshiki gift wrapping—wrapping gifts in reusable fabric—has been practiced in Japan since the Edo Period. It could help reduce the 540 tonnes of plastic-finished, non-recyclable wrapping that Canadians discard every year. The most sustainable (and cheapest) way to wrap furoshiki style is reusing old fabrics or thrifted vintage silk or polyester scarves.

While the fabric originally used in furoshiki and bojagi, the similar Korean cloth wrapping tradition, can represent a lot of labour to manufacture, the spirit of both is to use what you have and respect the workmanship and usefulness of fabric. I tried it out—here’s how.

1. Get a big square cloth 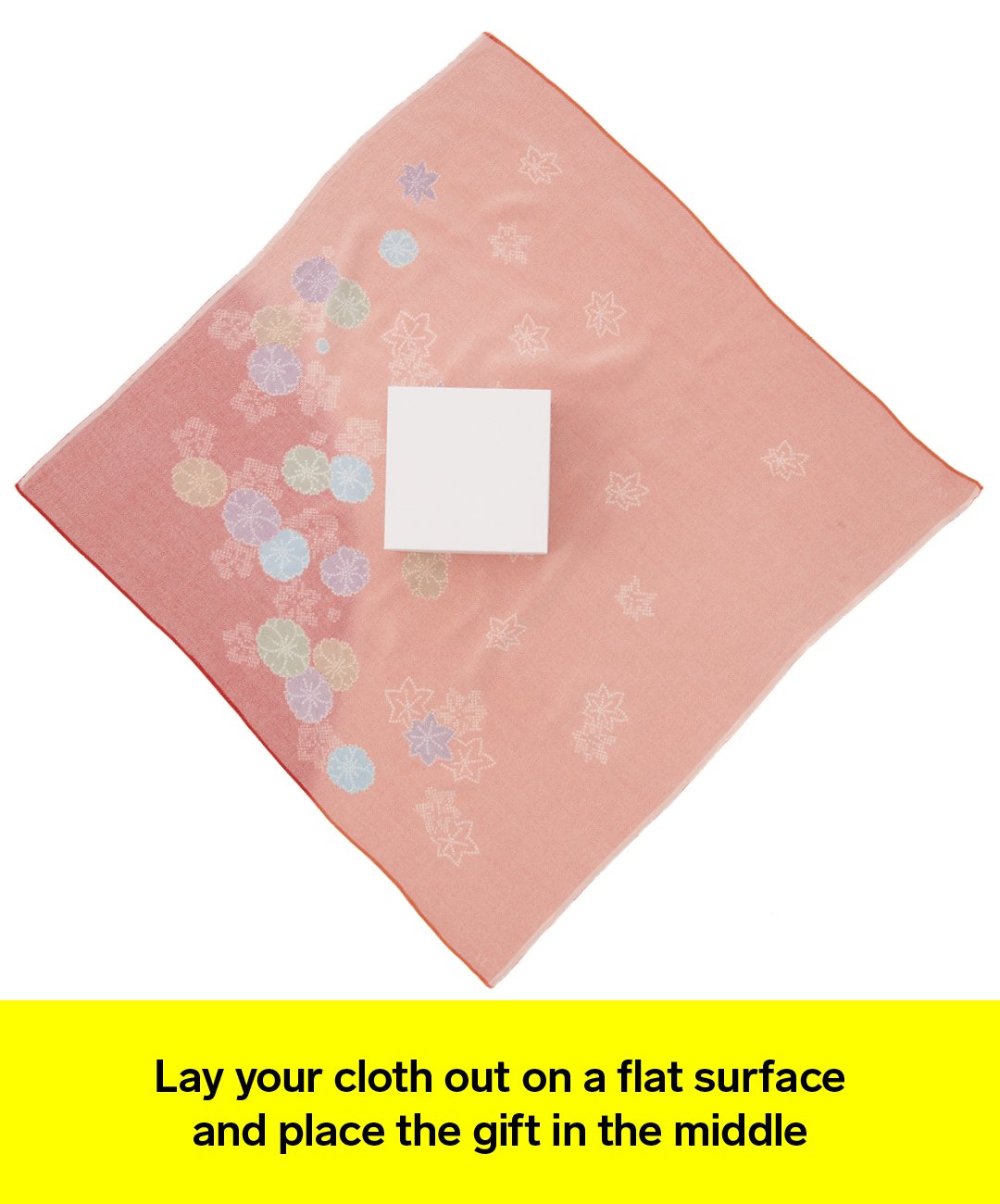 In order to wrap a gift furoshiki-style, choose a cloth with a diagonal length about three times the length of the gift. It needn’t be exact; this proportion just gives you enough cloth to cover the whole gift without too much extra flop on the sides. I started with the simplest wrapping style, otsukai tsutsumi, the basic carry, for a small gift. A patterned women’s square scarf is just the right size for this. Ayano Hasui, the manager of international sales and press from Musubi, a furoshiki specialty shop in Kyoto, advises that you can use any cloth “which is not too thin, not too thick, and soft enough you can make a knot [of two of the corners]”. Her shop uses silk, cotton, organic cotton, rayon, polyester, linen, and wool. The vintage scarf I used is polyester, with a graphic pattern in seafoam green, on a cream-colored background. It cost about three dollars. Other options might be a square tablecloth, or a length of unused fabric. (I recommend popping the cloth in the wash, if you’re using something bought second-hand.)

2. Lay your cloth out on a flat surface and place the gift in the middle 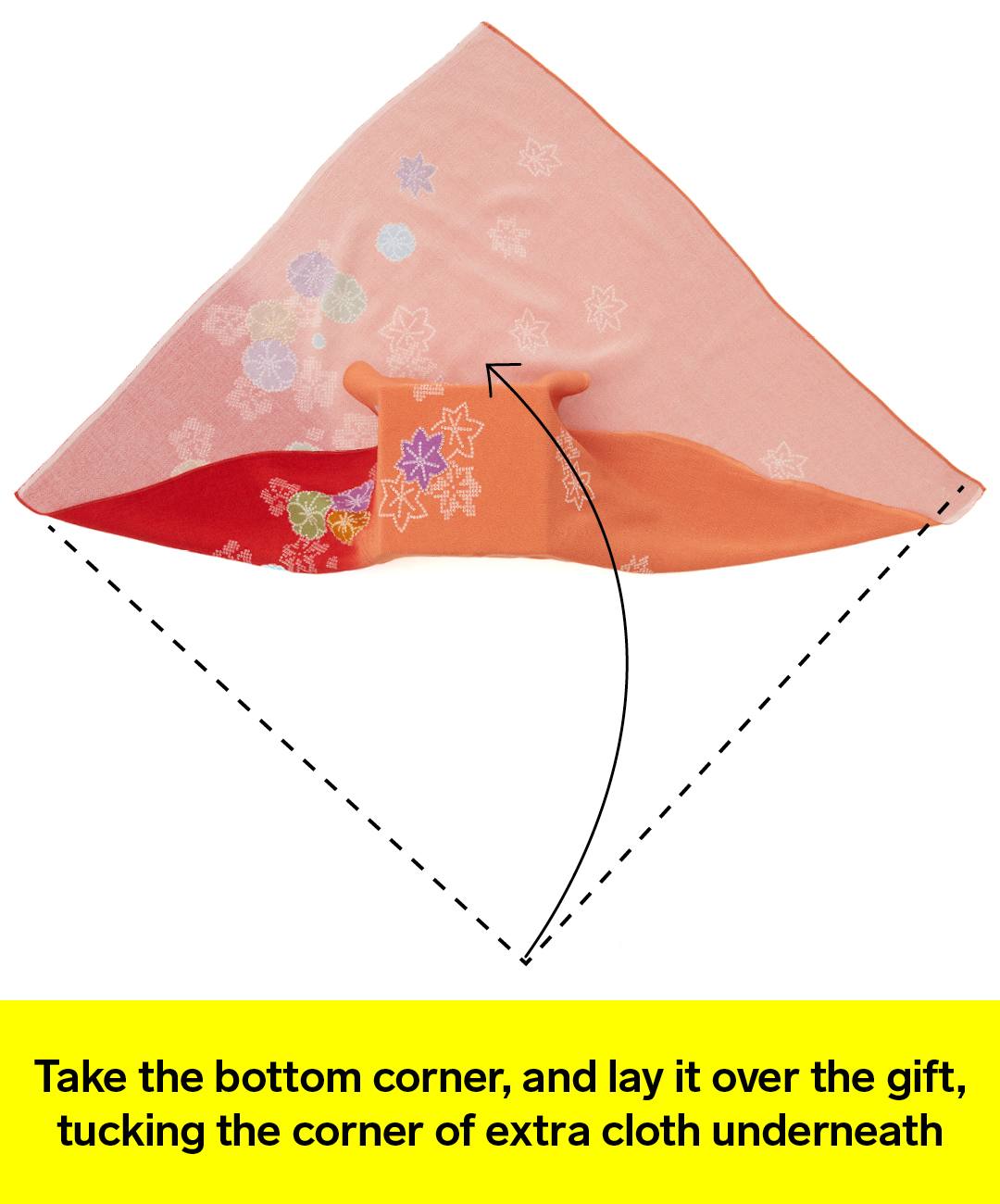 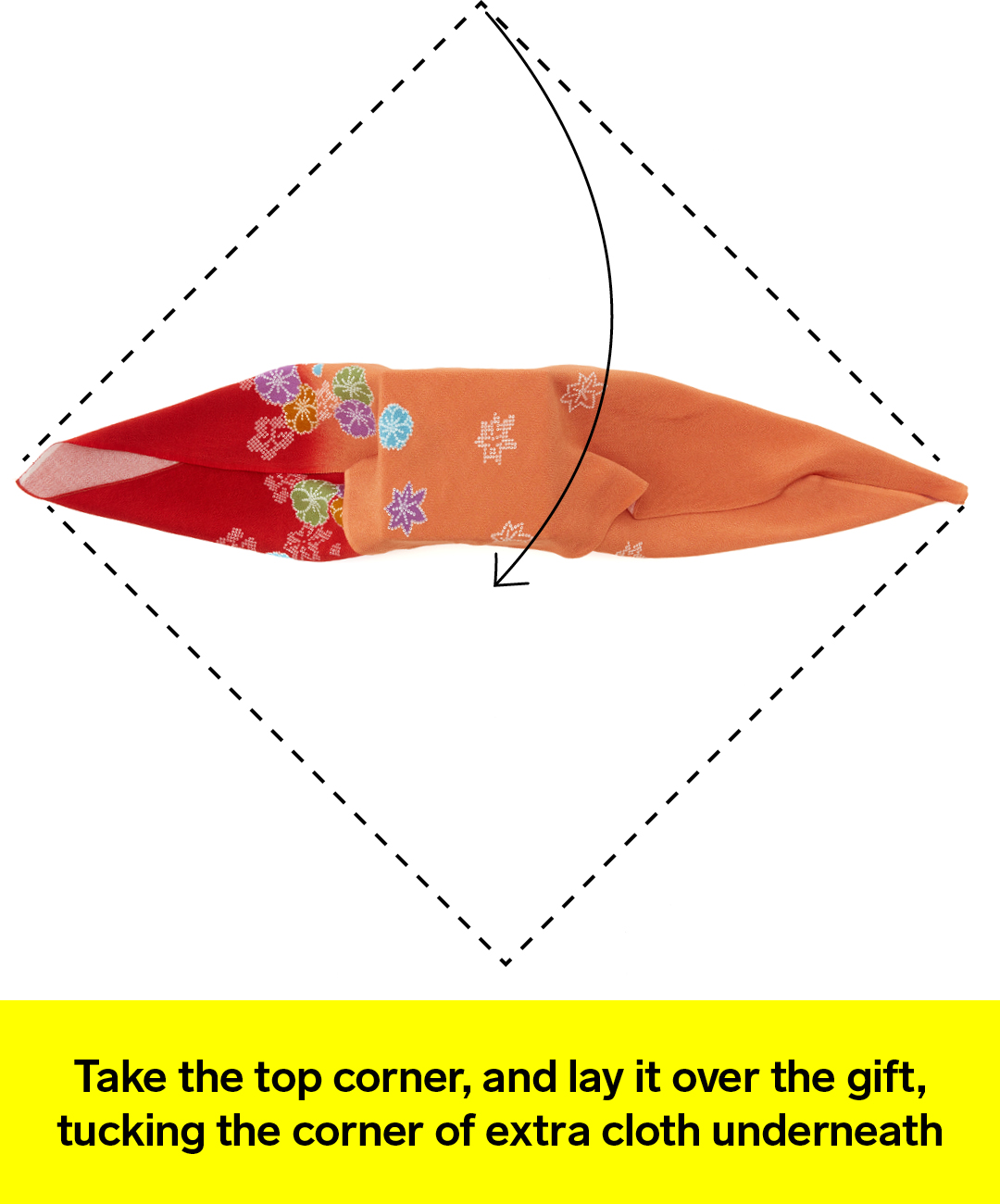 I laid my scarf flat on a large table, diagonally, and positioned the gift in the centre, with the square’s pointed edge facing me. I tried to think of the long ends as handles that will be tied up at the top of the gift. It’s a bit like beginner’s origami, or neatly wrapping a book in paper. I took the corner in front of me, and laid it over the gift, and tucked the corner of extra cloth underneath. Likewise with the opposite lower side. It’s okay if the extra fabric at the corner hangs loose. At first, I was worried about wrapping the gift in the correct, traditional way. But Hasui reassured me that the most important part is “learning how to make a square knot—called ma-musubi in Japanese—because it’s not safe when you carry objects, if it’s tied in a different way.” In other words, the exact folding isn’t as important as making sure the gift is actually secure.

3. Narrow the sides that will be tied up 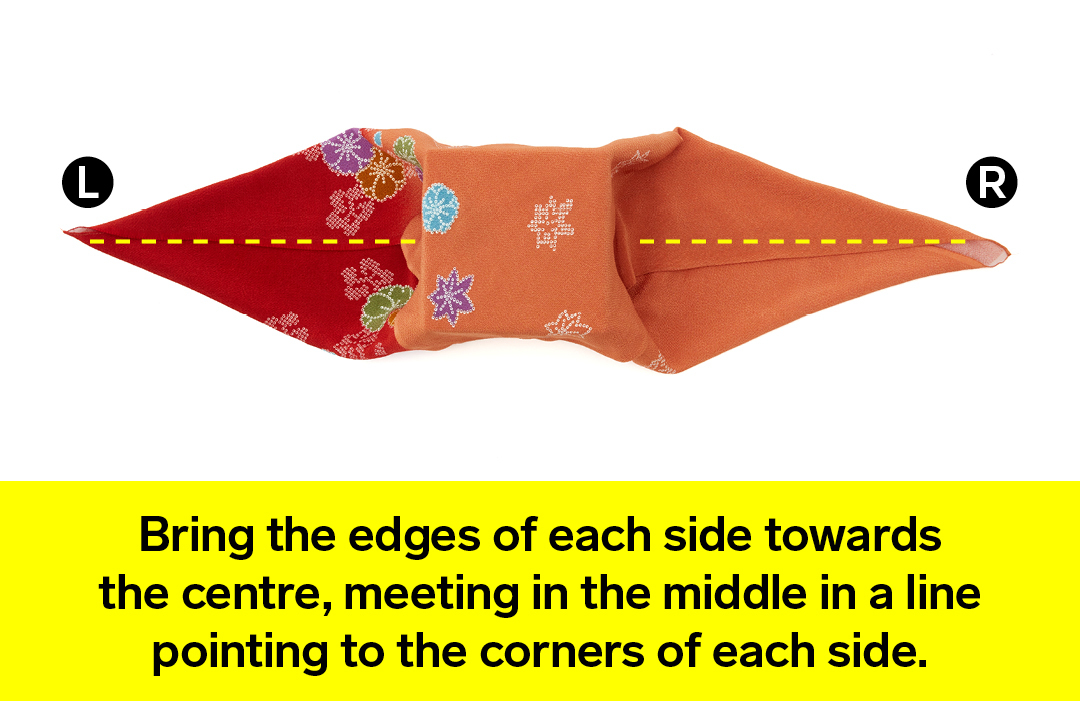 If you’ve ever made a paper airplane, the principle is the same. Bring the edges of each side towards the centre, to make them more like little handles. Ideally the edges of each side will meet in the middle, in a line pointing to the corners of each side. Fabric will move; don’t worry if these shapes won’t stay exactly straight, because you’re about to tie them together.

4. Bring these side handles together and tie them in a square knot at the top 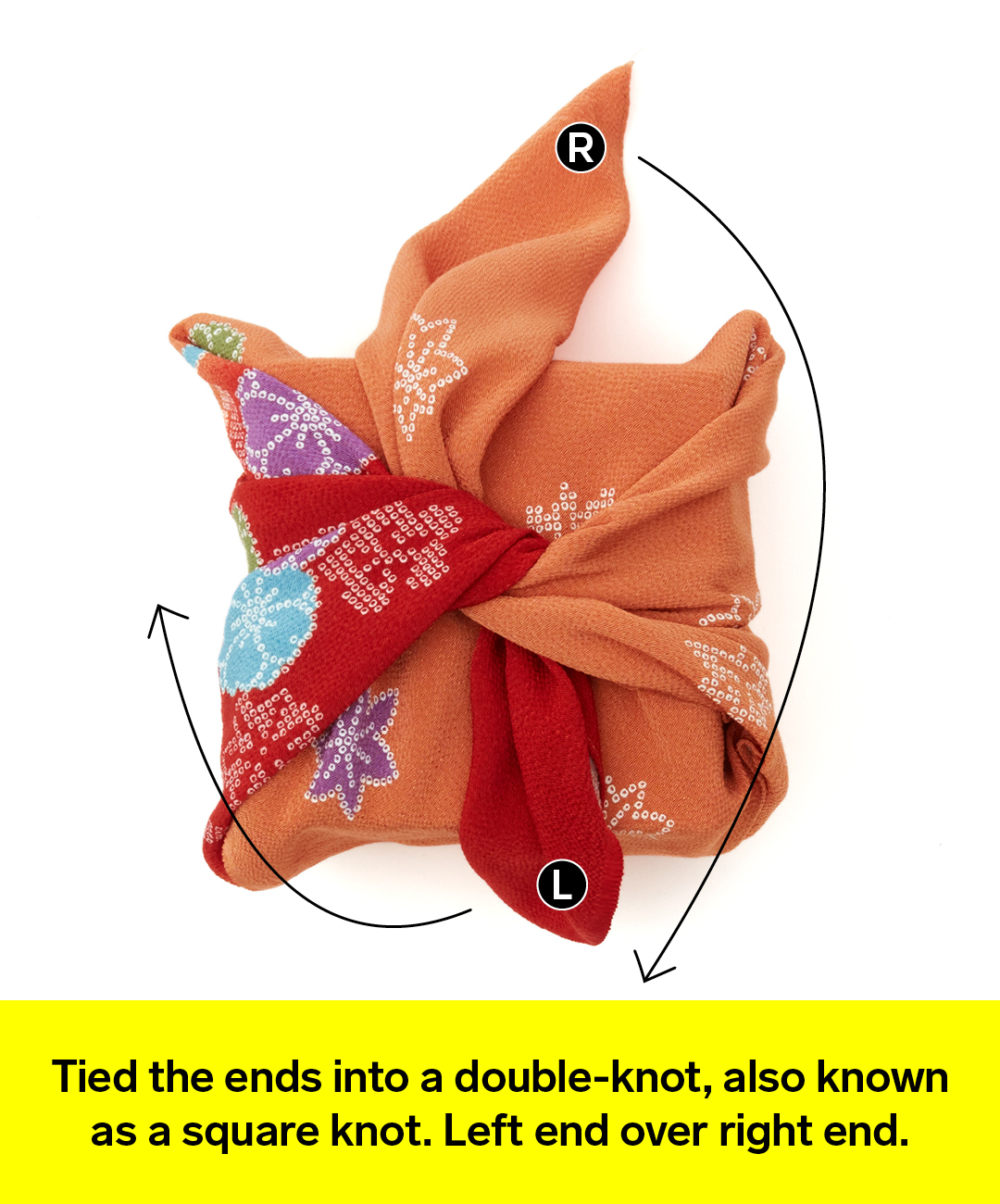 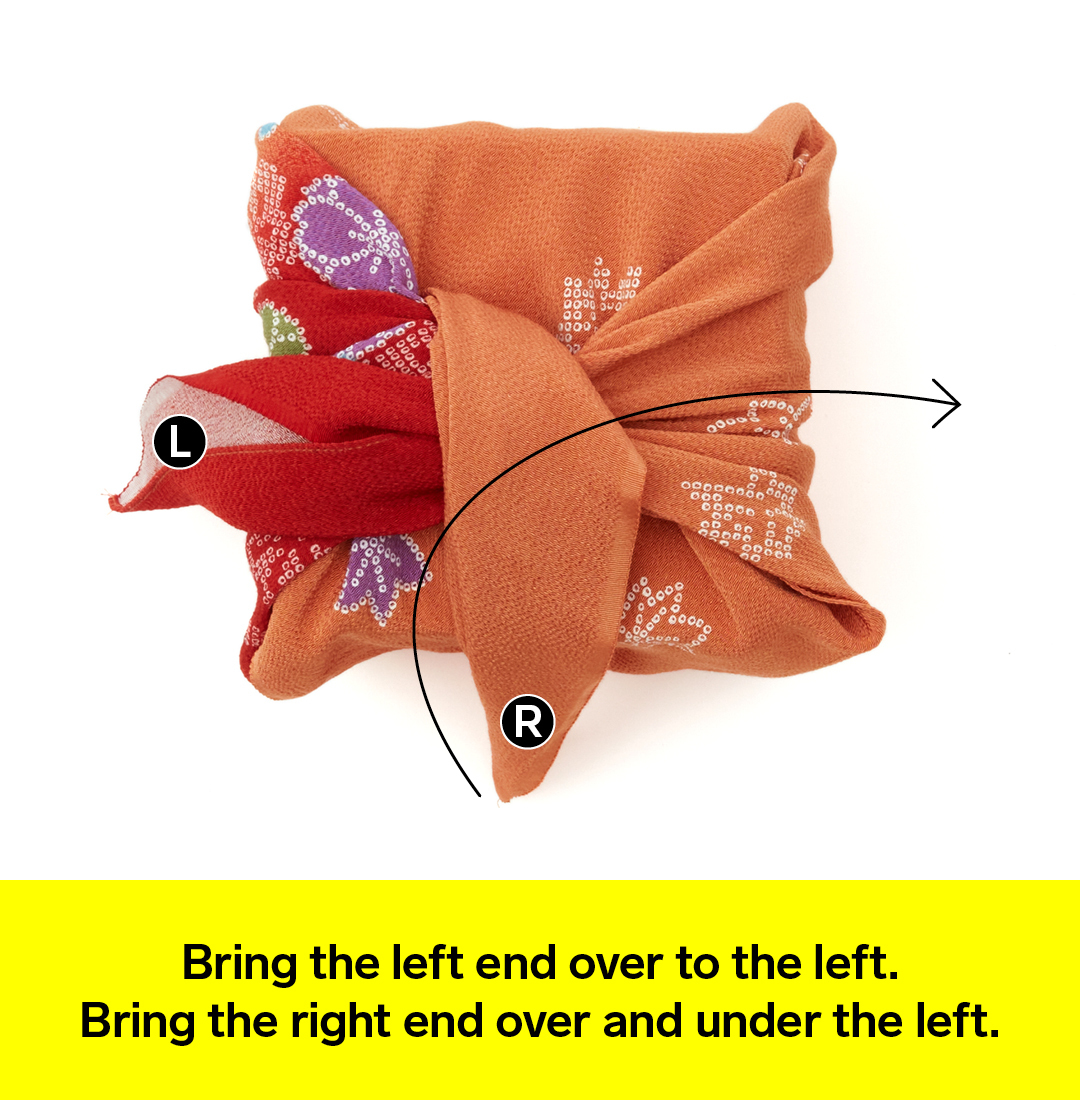 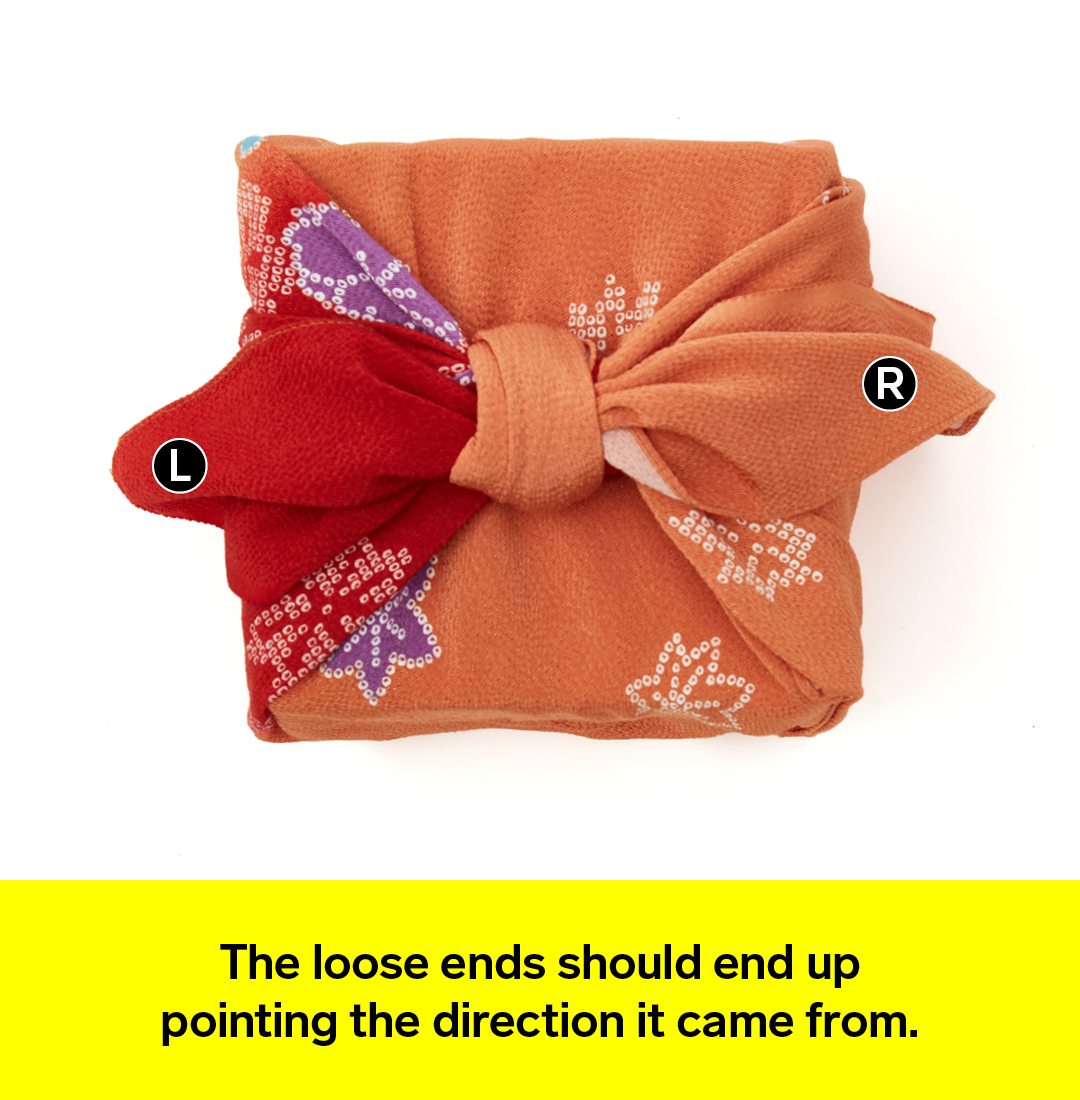 Lastly, I took the left and right side handles, brought them together at the top of the gift, and tied them into a double-knot, also known as a square knot. The ma-musubi, or square knot, is important if you are carrying a wine bottle or a watermelon in your furoshiki. It’s actually the exact same knot that’s taught to scouts and in macramé as a square knot—two loops intersecting, which allows it to bear weight. The trick is to use the same side to tie both knots. The loose ends should end up pointing the direction it came from. For my purposes, this knot didn’t have to be weight-bearing. It was snug, but not too tight to be untied. The extra ends fell over the sides. I was impressed with how cute it turned out, and how quickly the wrapping came together. The result was a little parcel wrapped in a beautiful checked fabric, ready to be presented to my friend.

How to add flair to your wrapping

Some styles of furoshiki only use one cloth: others will use an elastic band or a ribbon, too, to hold together a folded pattern at the top, like patterns that look like flowers. You can also tuck a real flower into the knot at the top, which isn’t traditional, but is fun. There are wrapping styles for different objects and purposes, such as covering a tea setting, carrying a wine bottle, and many others.

Is it easier than using wrapping paper?

The process was much easier than estimating wrapping paper size, cutting it straight, and trying to get more of the scotch tape on the present than on my fingers. In the time remaining before the holidays, I’ll look for square cloths to match gifts I have in mind. Luckily for me, it’s mostly books! I have a few other vintage scarves of a similar size, as well as some extra length of printed cotton. The thrift store near me often sells old linen tablecloths, but any cloth I can cut square will work. Furoshiki or bojagi wrapping—which use very similar wrapping techniques—would be useful for anyone travelling with their holiday gifts. I could do all the wrapping beforehand, without worrying about tearing wrapping paper in transit, or stuffing gifts into bulky, non-recyclable gift bags.

The story behind furoshiki and bojagi 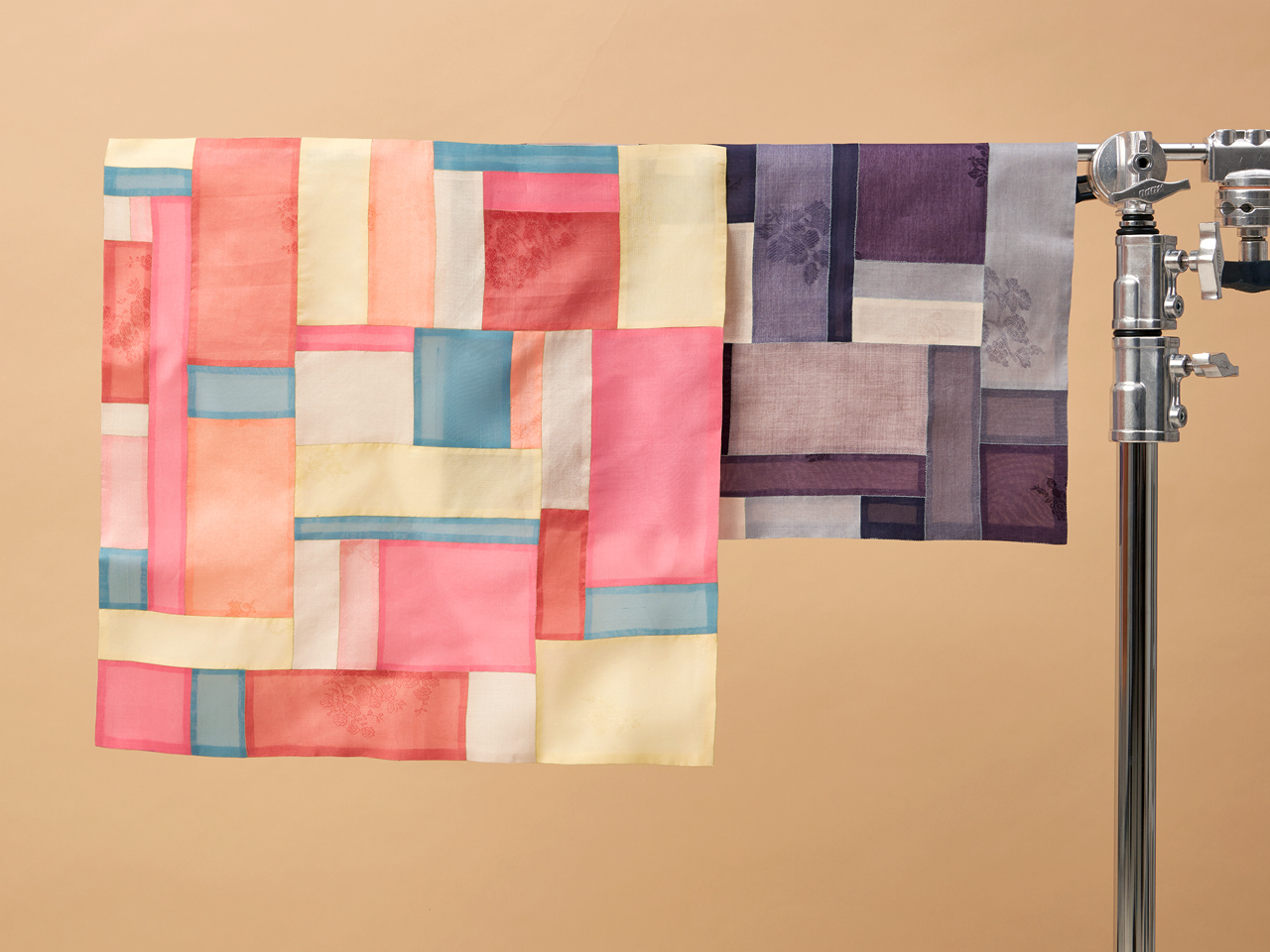 Furoshiki were originally used to carry clothes, towels, and belongings to and from the bathhouse. It allowed you to keep everything wrapped up, clean and separate from others’ belongings. Furoshiki showed off innovative fabric production techniques that were also used in silk kimono, like yuzen dyeing, a technique that allowed for the use of multiple separate colors on the same cloth, in intricate patterns or scenes that appear to be hand-painted. If low cost is not a priority with furoshiki wrapping, there are also very beautiful furoshiki cloths available in Canada, at shops like Chideno, based in Vancouver, Lunchporter, based in Montreal, and Nanao Kimono, based in Calgary.

Furoshiki comes from a time when fabric was highly valued. The fabrics usually used for furoshiki or bojagi are silk, cotton, and ramie (though polyester is completely fine to use today). Back then, the labour of raising the silkworms and the mulberry trees they live in, or growing the ramie plants—which go into a fabric like linen—and processing the fibers, along with the dyeing and weaving of the cloth, would have been done in manual processes demanding a lot of labour and skill. As a result, fabric was expected to be used until it was worn out: first in new clothes, for a special event, or to be worn on the first day of the New Year, and then, in other formats like bojagi and furoshiki.

Furoshiki and bojagi cloths were made with care, often hand-embroidered or quilted with symbolic designs or knots, like the family’s crest in Japan, or a ceremonial marriage knot in Korea. The Korean textile artist and bojagi teacher Youngmin Lee explained that patchwork bojagi would sometimes be made from the scrap fabric from ceremonial dresses and suits, hanbok, which, unlike kimono, used curved lines in their design. As a result, the bojagi would reflect the important events in a family’s life: weddings, births, funerals. Large bojagi could be hung in windows, where the dyed silk would color the sunlight, like a stained glass window, or in a doorway, as a breezy sort of door. Beautiful examples of patchwork bojagi are now found in museums all over the world, like the Met in New York and the Victoria & Albert Museum in London.

Today, the fashion industry is one of the worst polluters, after the oil industry. Since learning about the many traditional uses of cloth wrapping, I’ve noticed other times when I can use cloth instead of plastic, which will end up in a landfill, in oceans, and in animals like us. I can wrap up my morning jar of tea and keep it hot, or wrap up my summer comforter for storage, so the cat sleeping on it won’t mean an annoying round of washing next spring. I like to wrap my lunch boxes to prevent spills inside my bag, a disaster that has occurred dozens of times. As I try new zero-waste substitutions, I appreciate the things I use more. I’m more hesitant about buying things I don’t need or will throw away. My individual choices may not save the planet, but for there to be enough pressure on governments to legislate, and companies to reduce their carbon output, it will take massive cultural change that everyone contributes to.

If you are feeling a little blue about the carnival of wrapping paper discarded over the holidays, or bothered with all the fussiness of paper wrapping, furoshiki gift wrapping is a lovely alternative. You may even find yourself thinking of other furoshiki or bojagi-style uses for cloth around the house, as Canada moves away from single-use plastics. It’s nice when “being good” environmentally is so simple; an ecological alternative can be a joy in itself. And you won’t hear any tape rolls squeaking.

And here’s how to wrap books Furoshiki style: 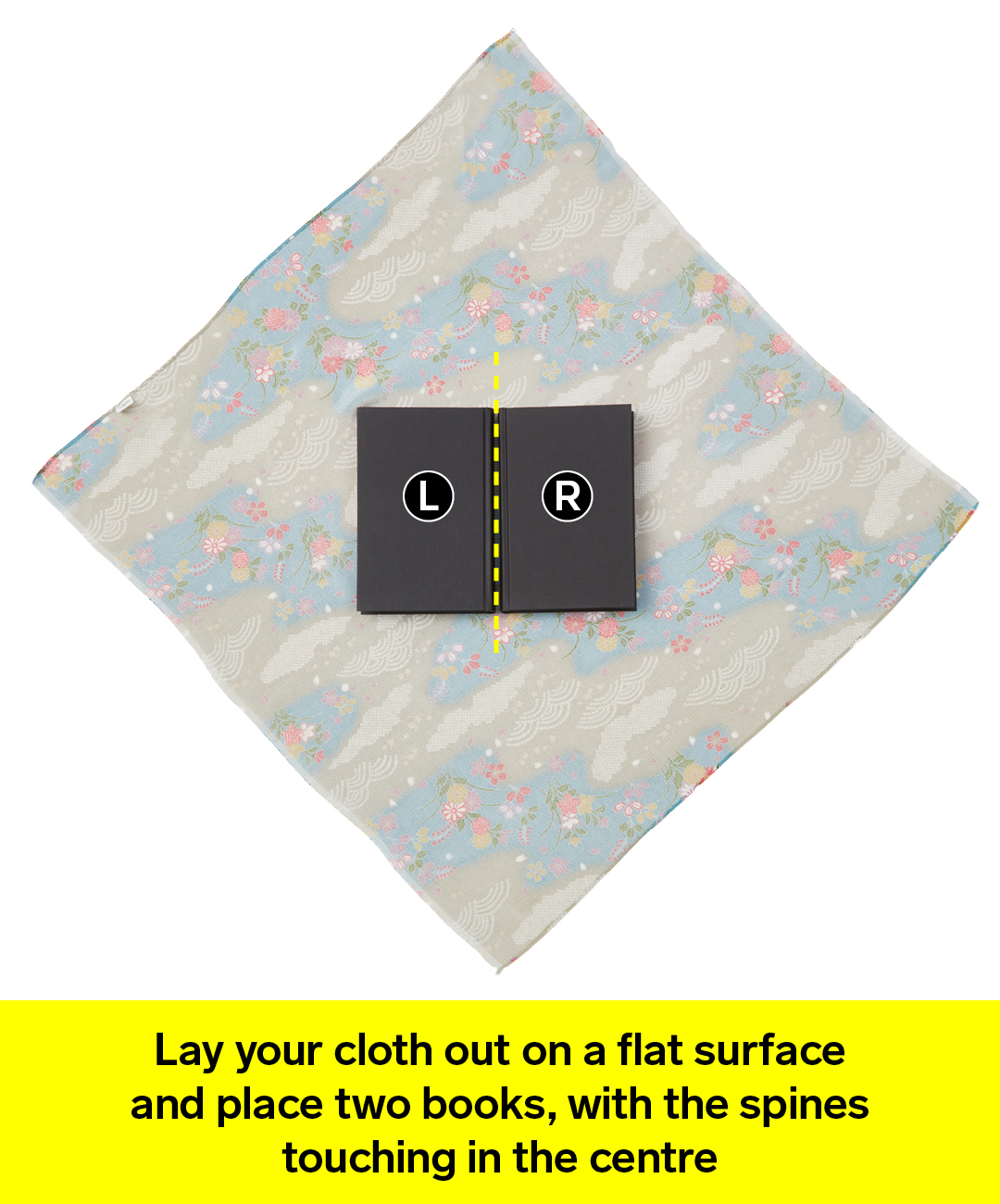 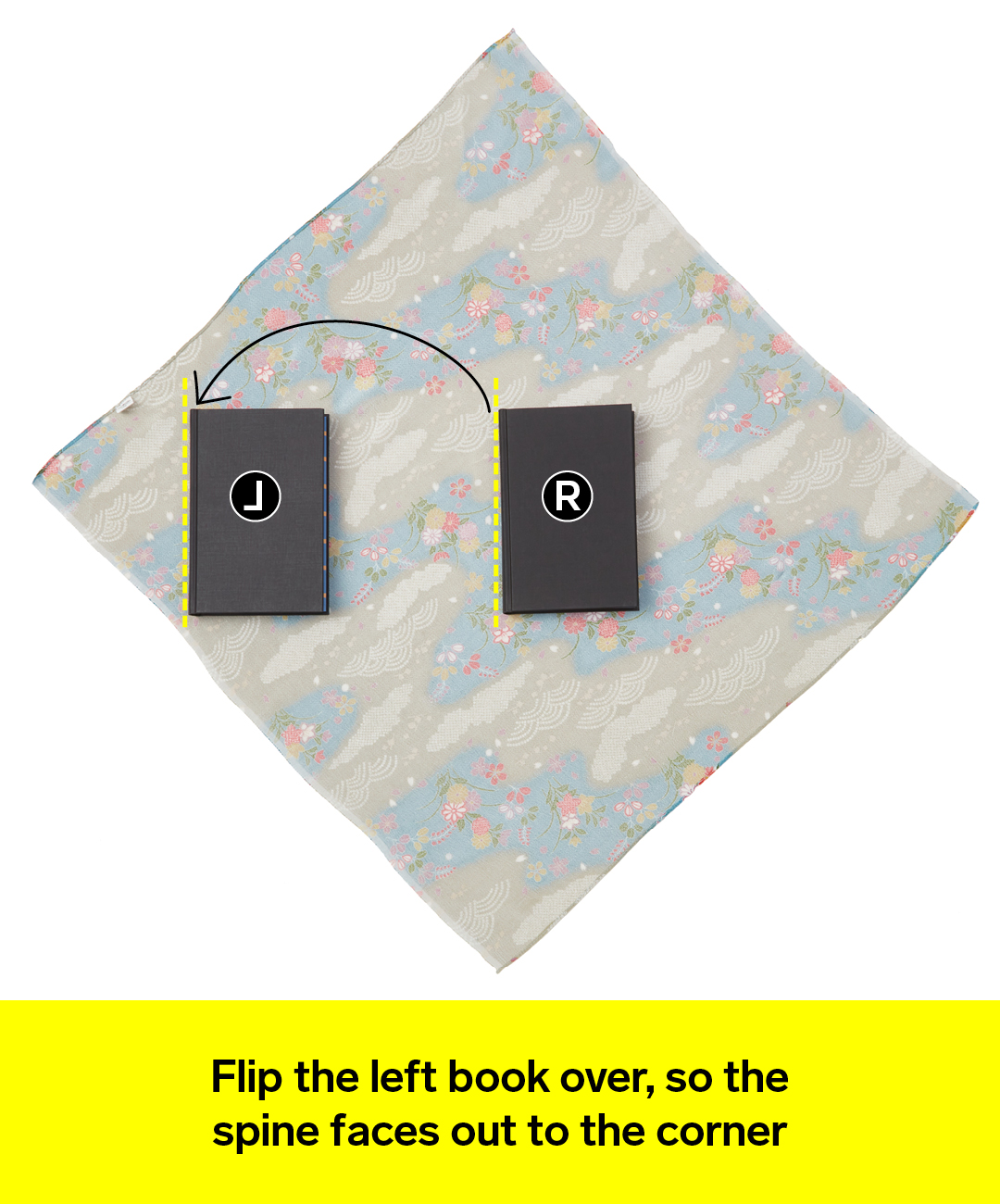 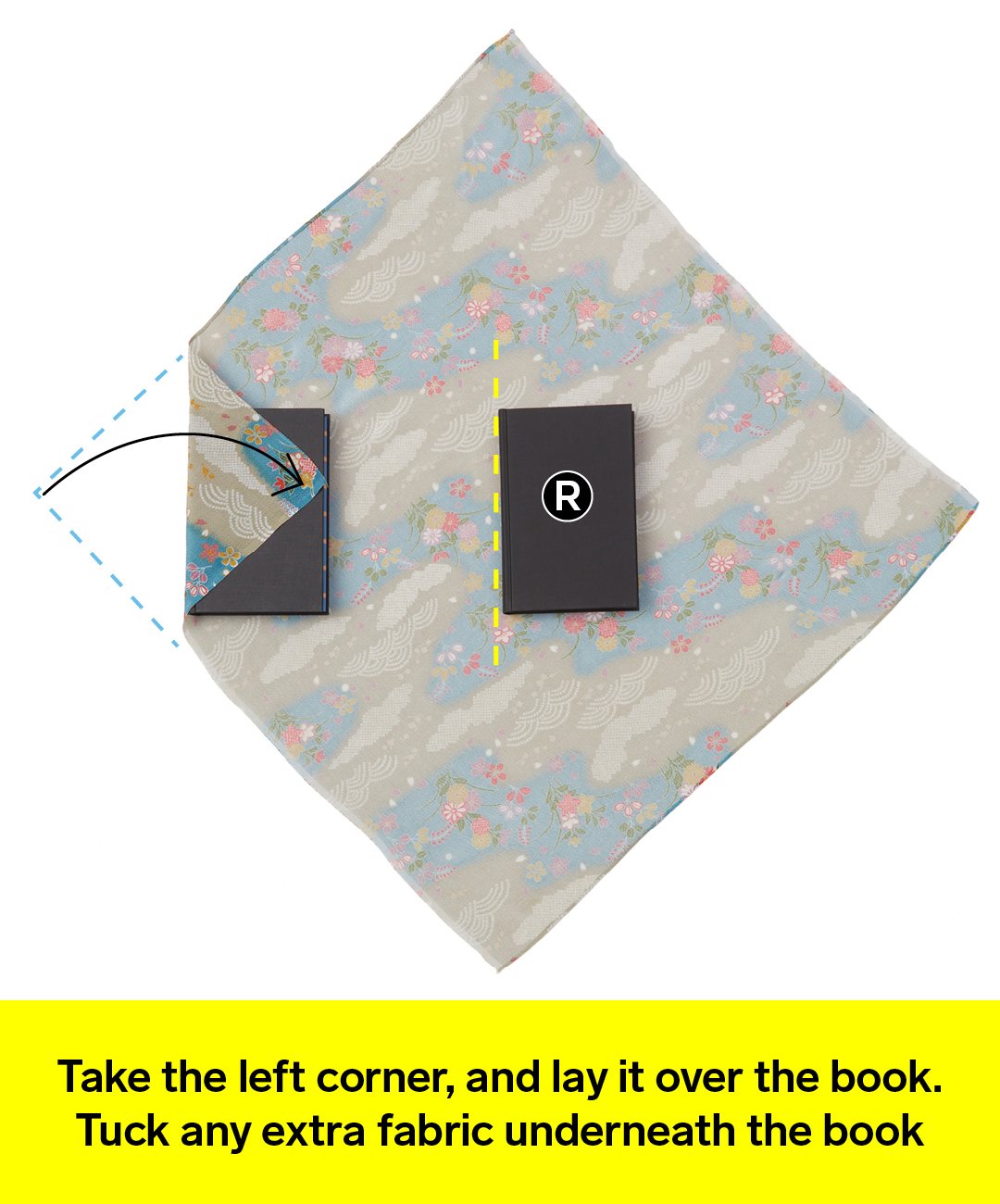 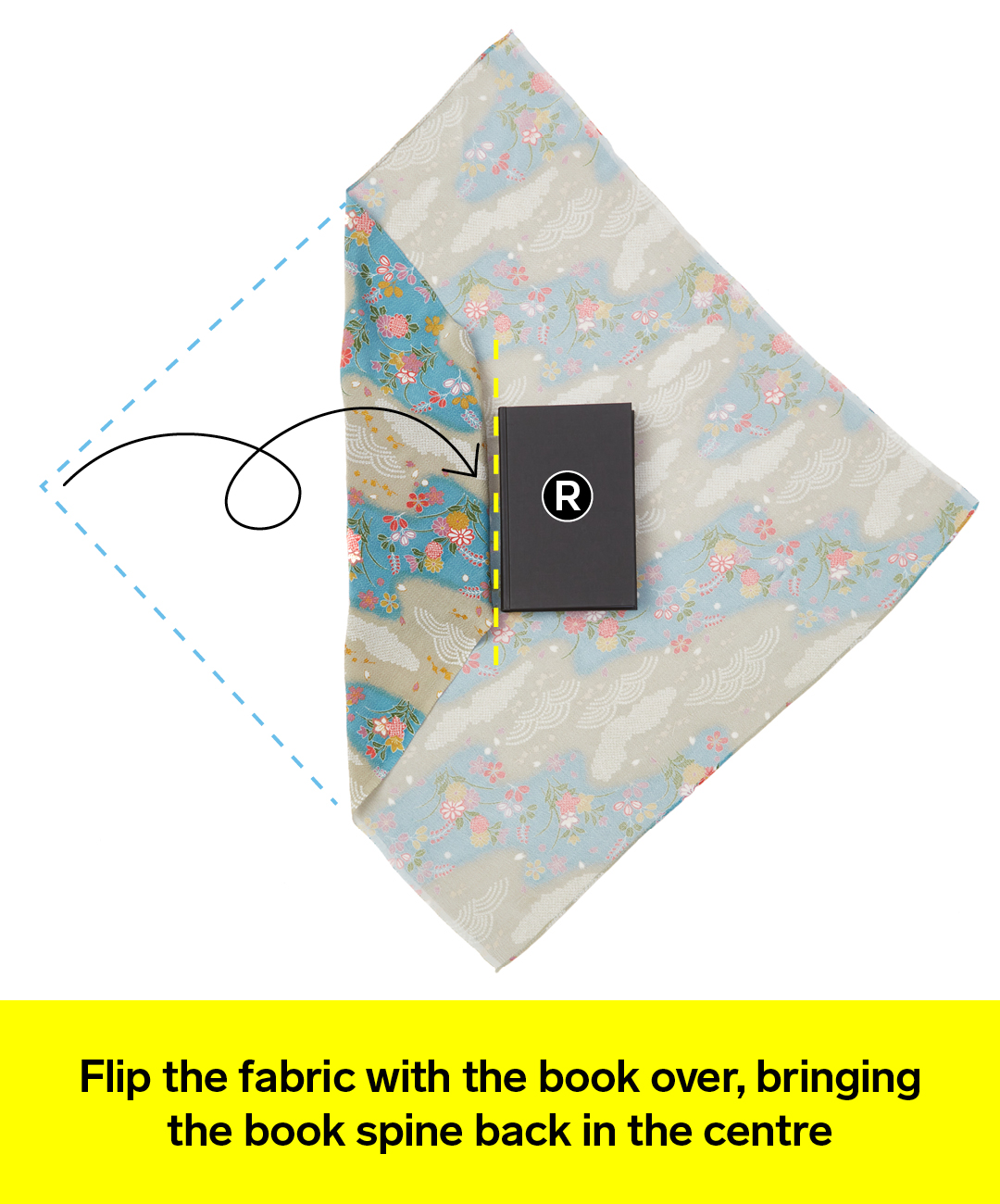 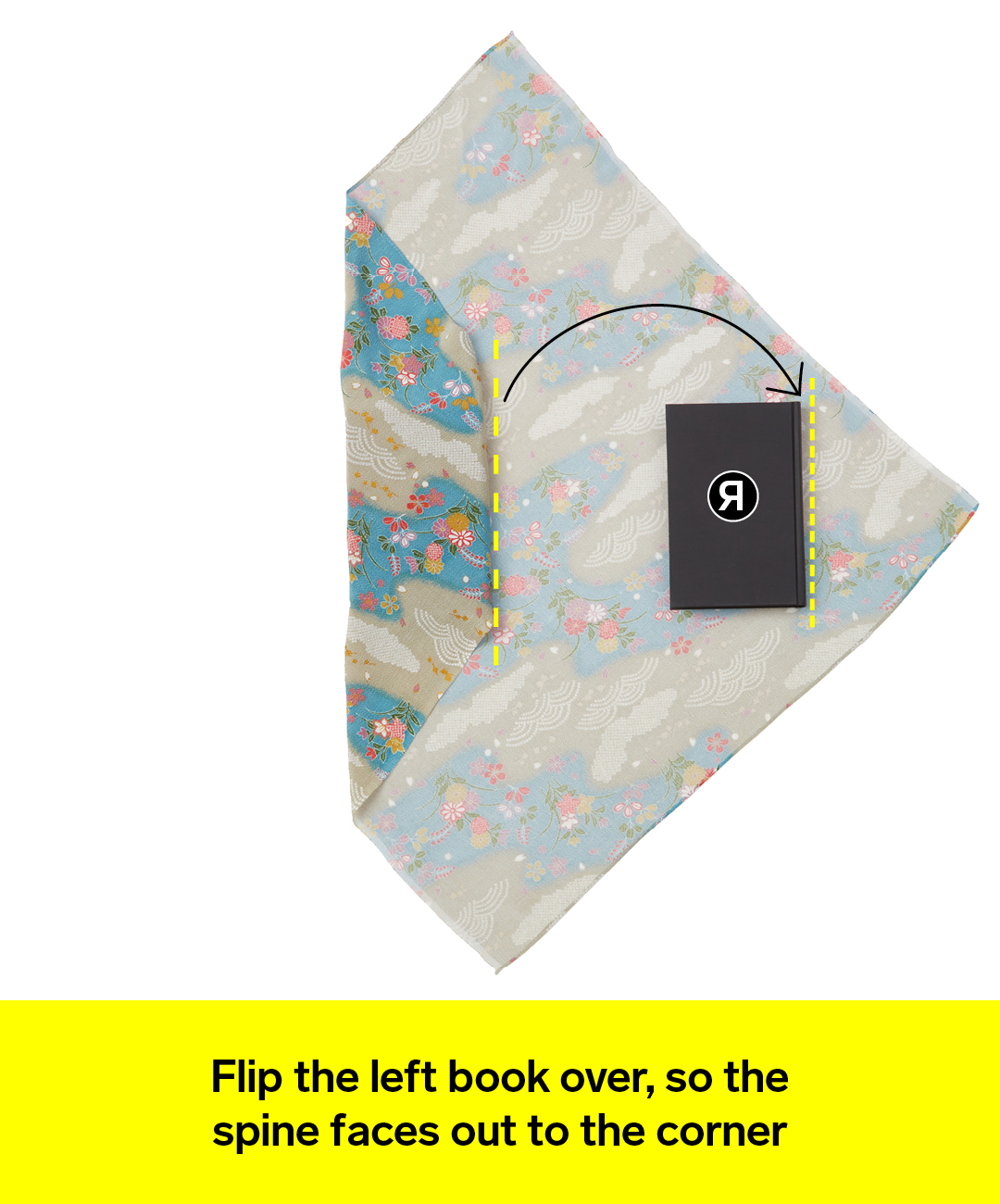 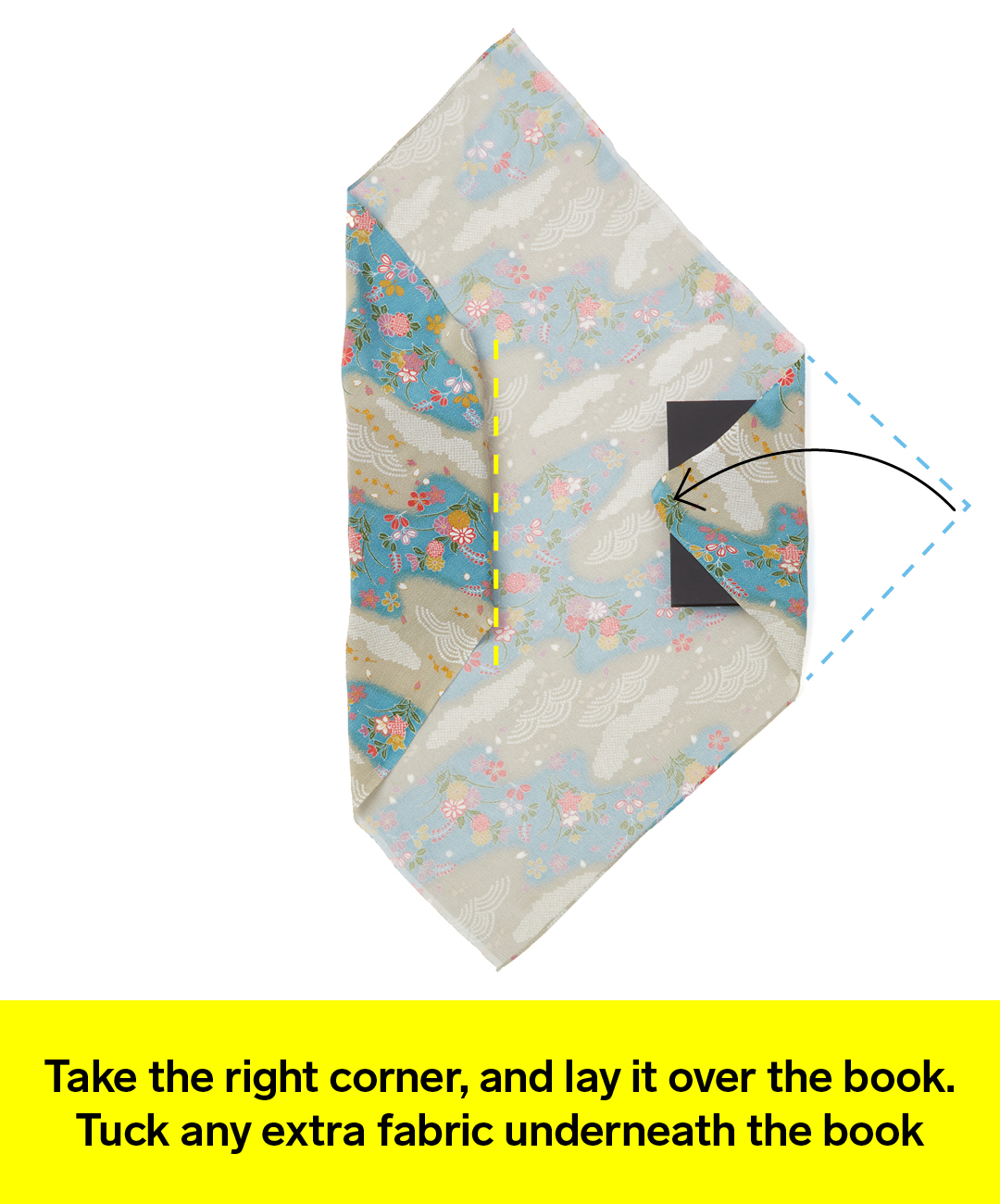 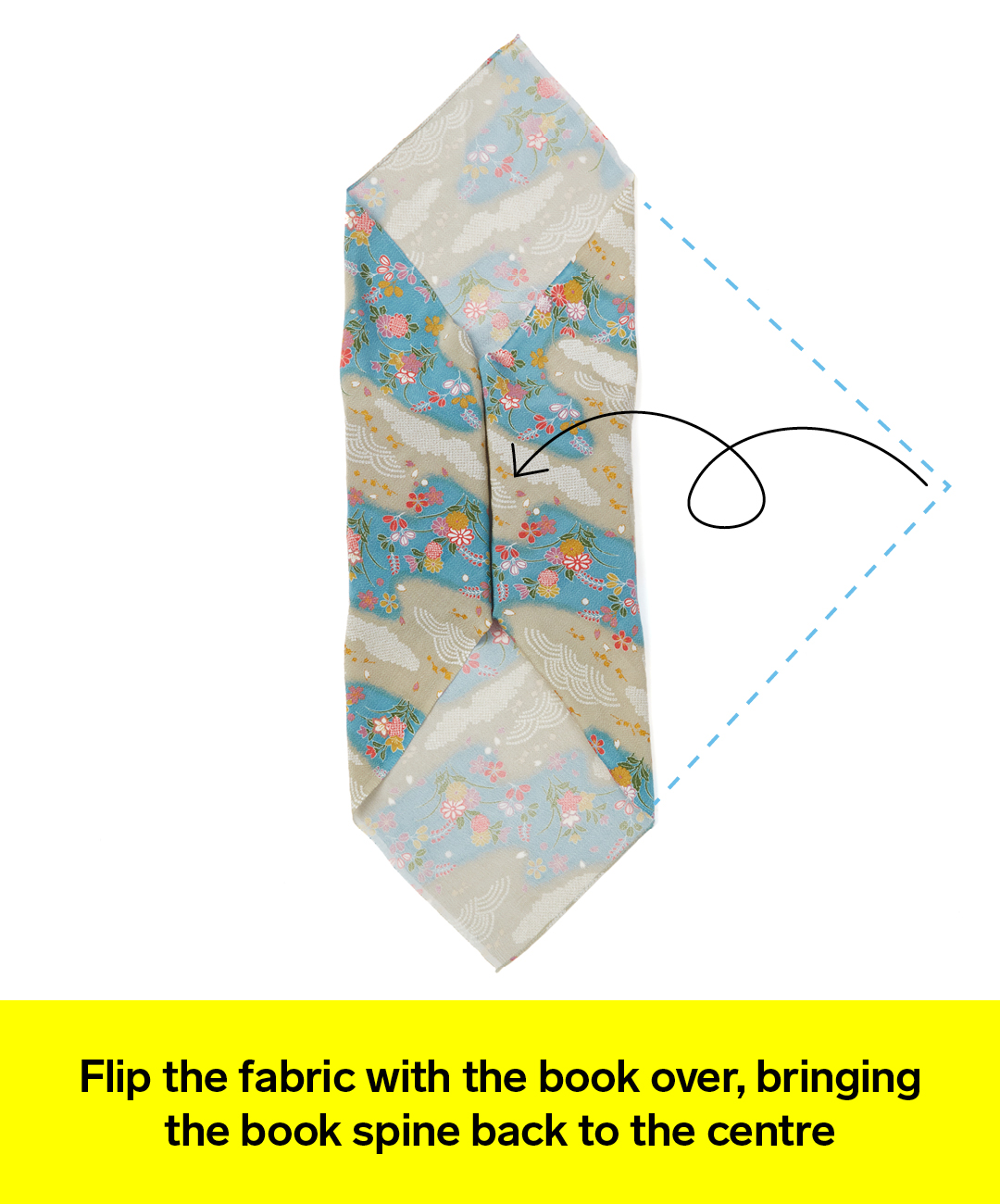 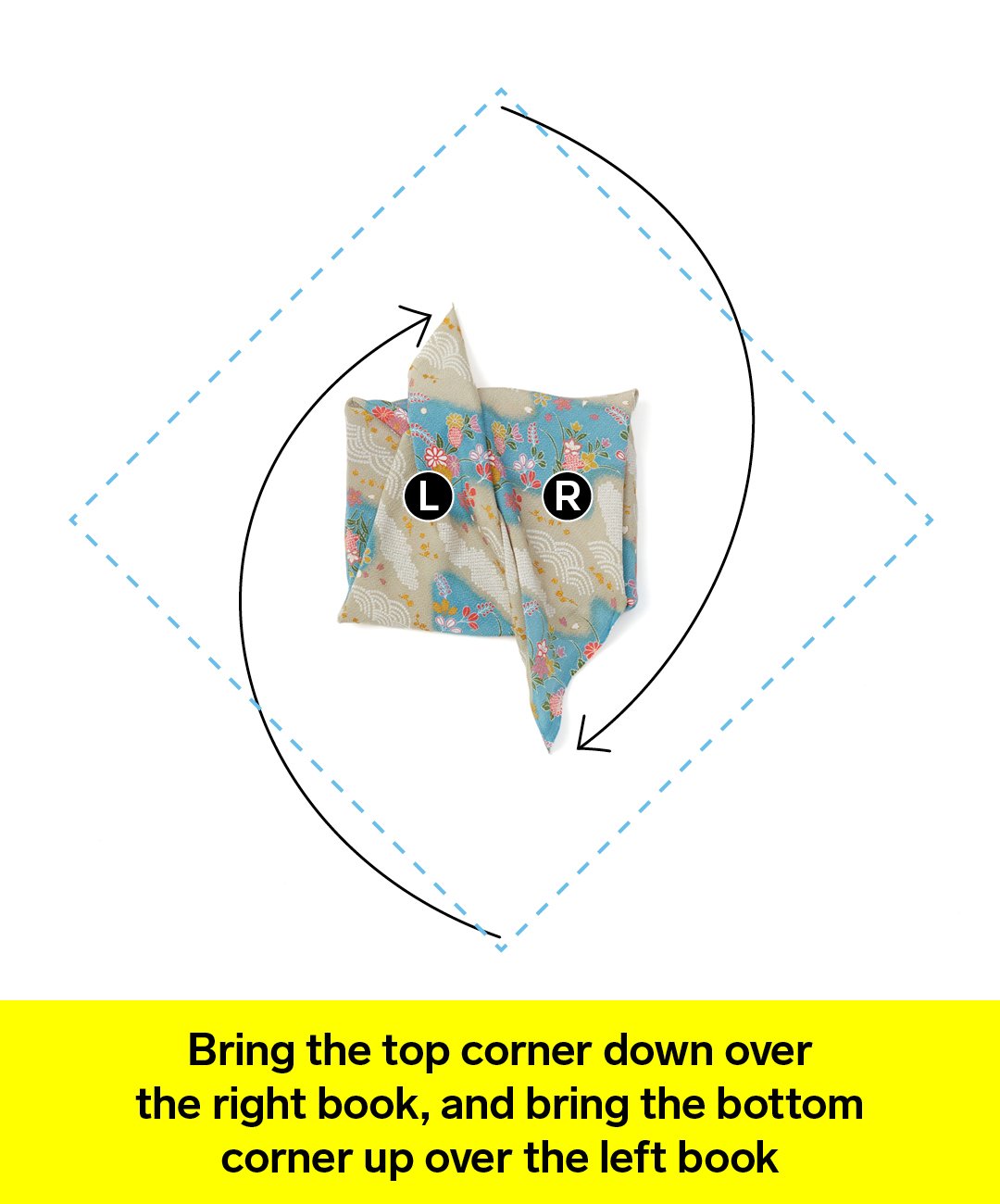 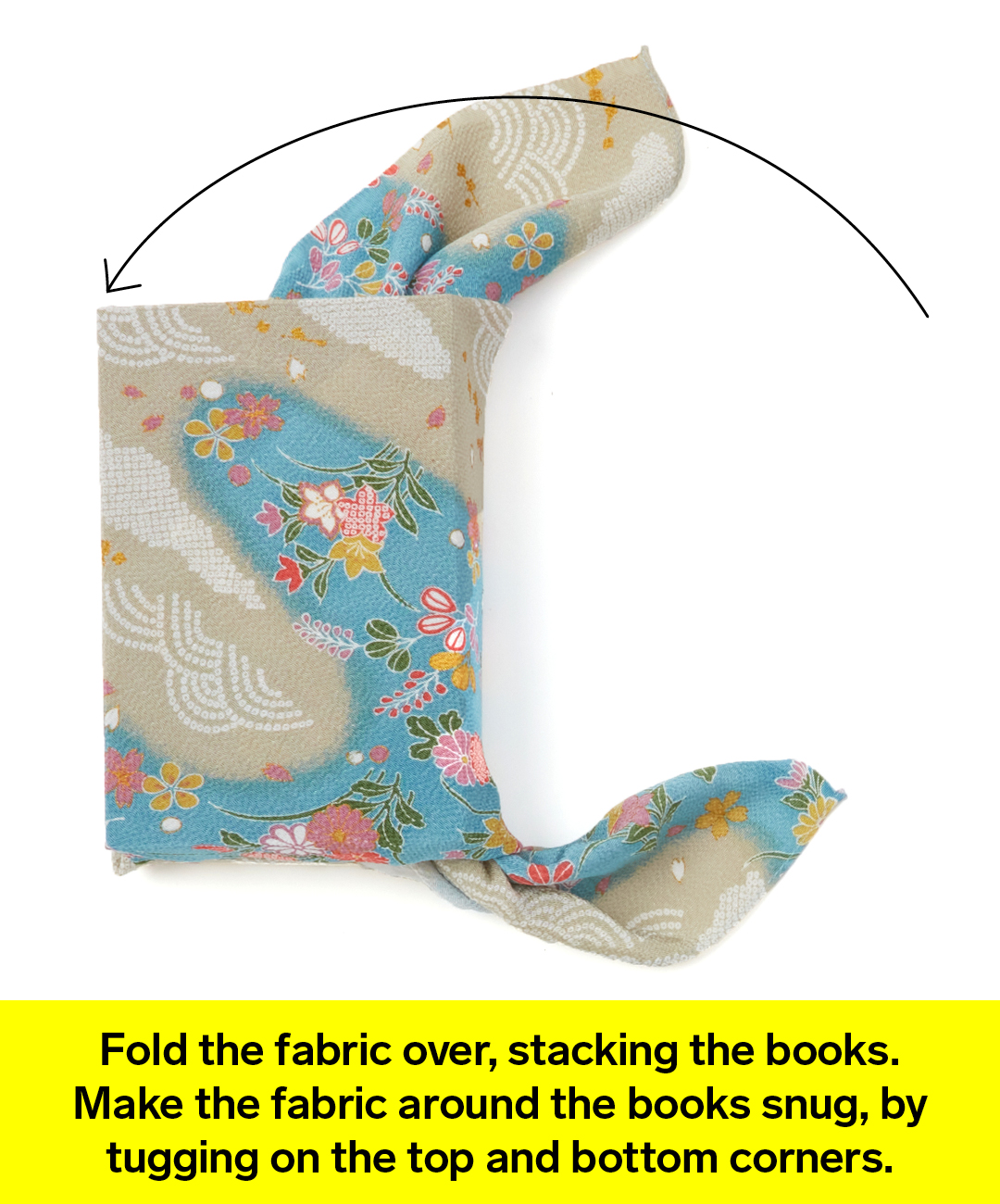 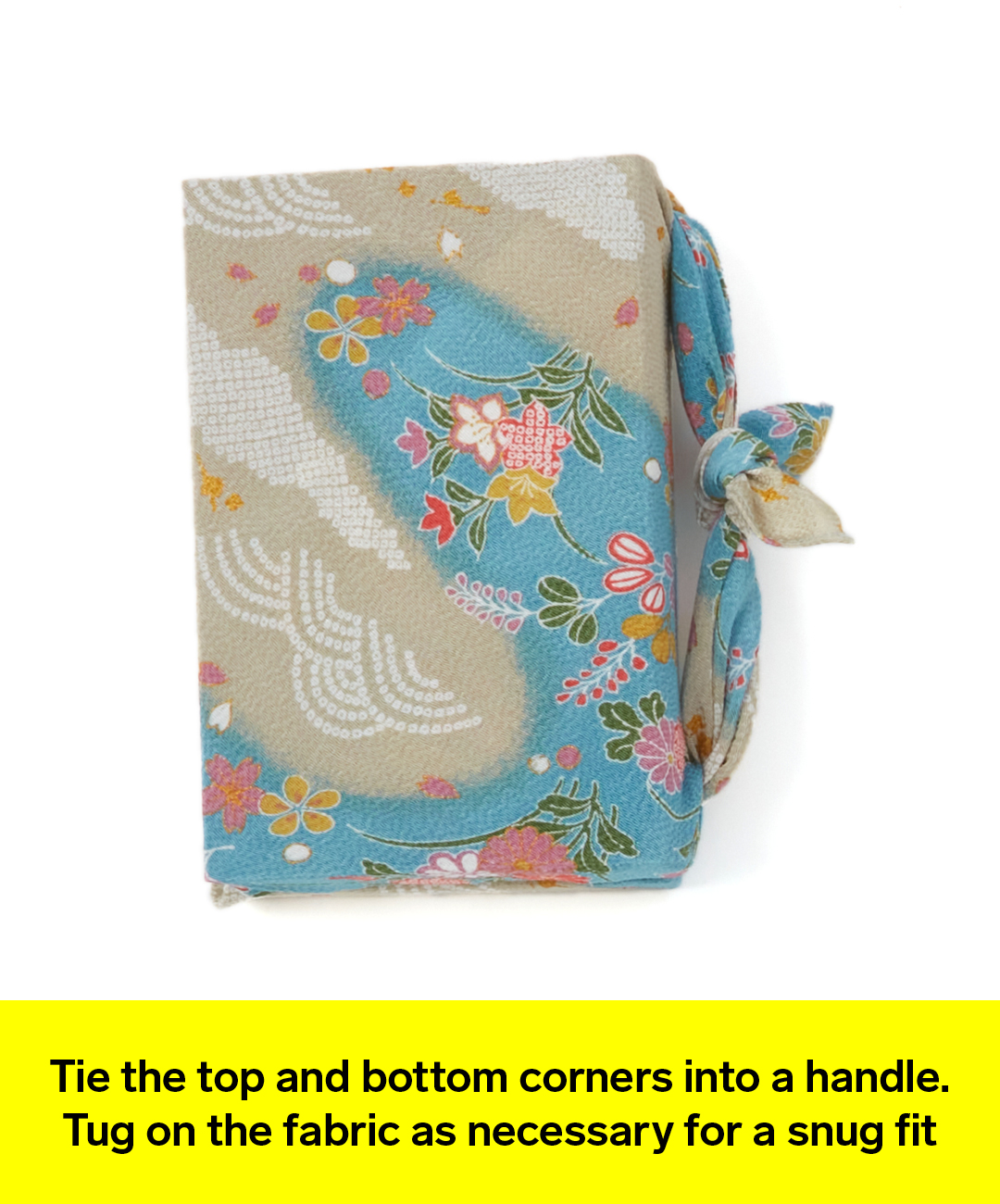 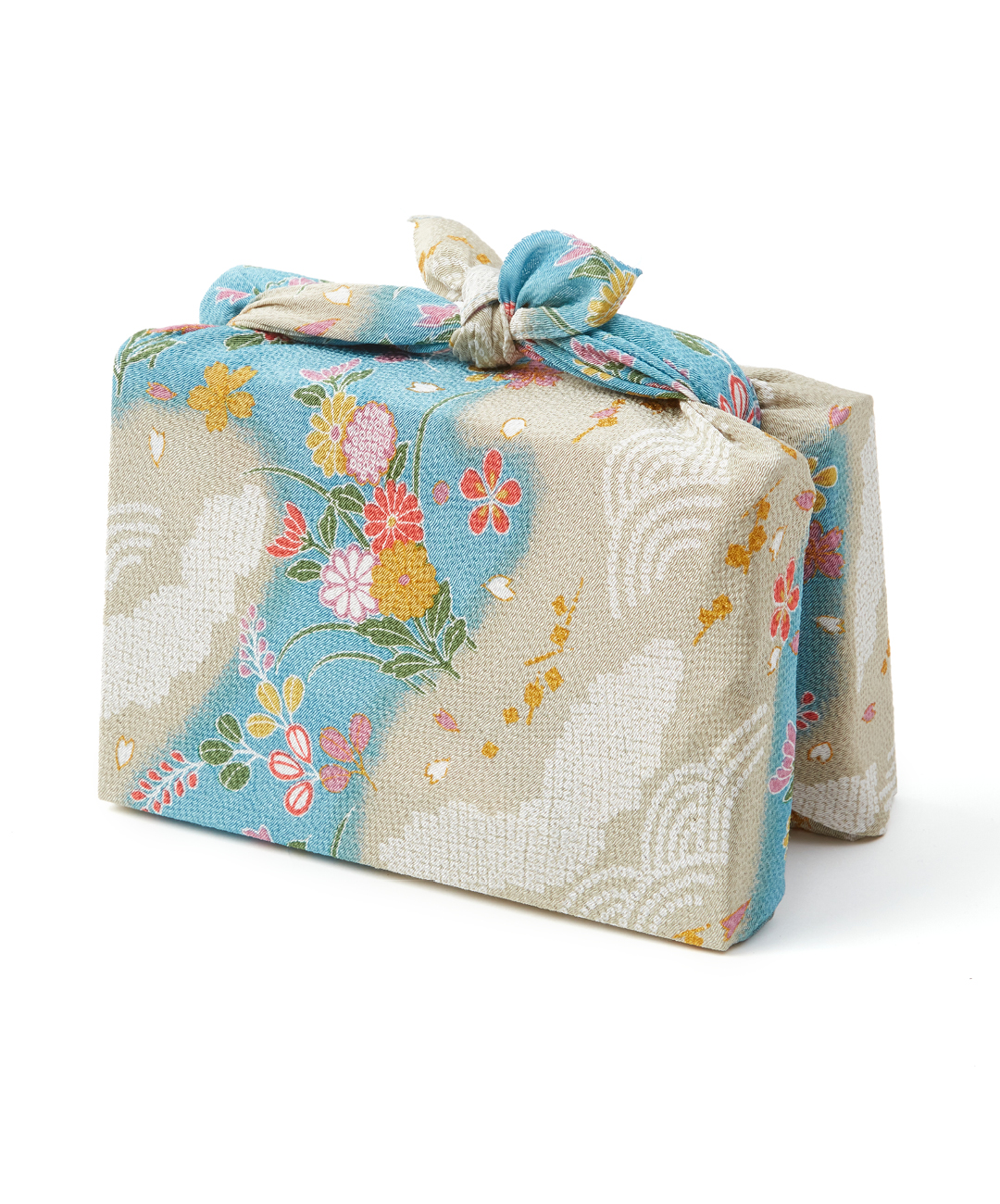 Get more ideas for how to wrap gifts—without using wrapping paper—here.