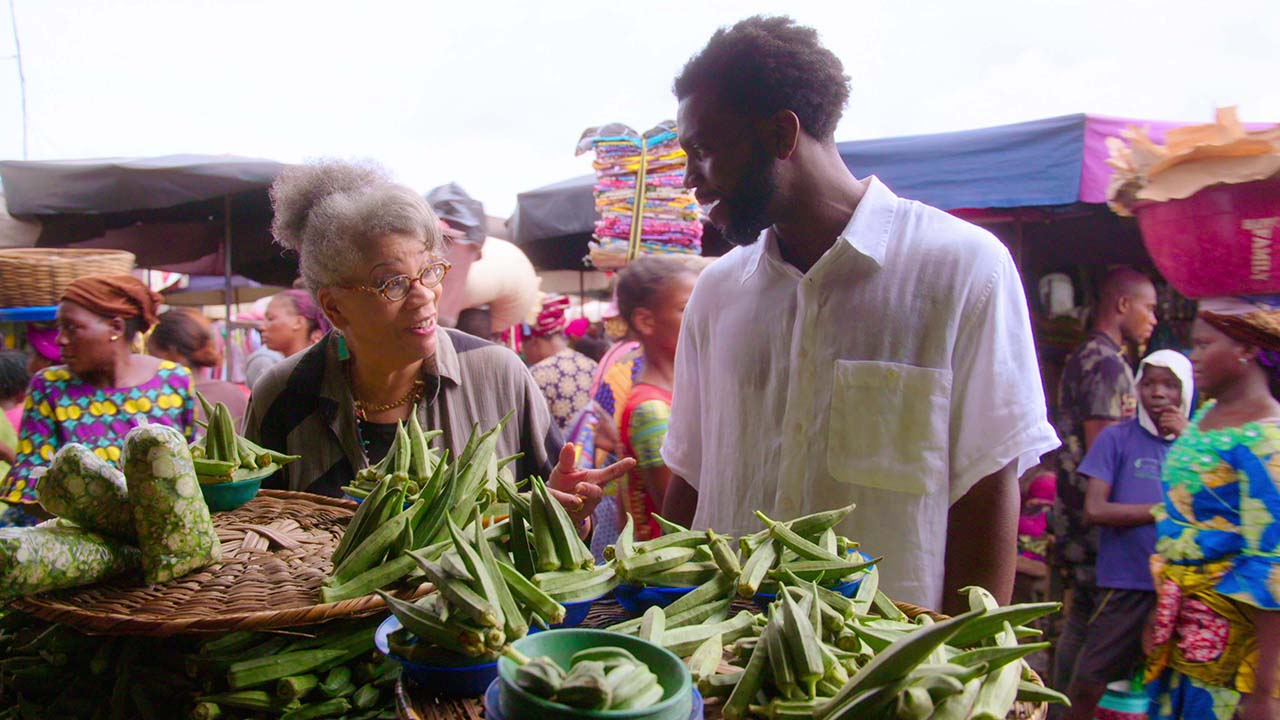 Jessica B. Harris and Stephen Satterfield in Netflix’s High on the Hog. (Photo: Netflix)

Directed by Roger Ross Williams, High on the Hog: How African American Cuisine Transformed America follows the warm and reverent food writer Stephen Satterfield as he traces the origins of African-American cuisine from its roots in the slave trade in West Africa to the United States. The series’ title, an early 20th century phrase meaning to live lavishly, also draws from slavery, where slave owners would take the best parts of a pig and leave the scraps to the slaves, who created an entire cuisine out of it. The show follows a common arc: Black people face disenfranchisement, are consumed and granted a false legitimacy, only to find out that they are still powerless against entrenched, systematic racism. But High on the Hog allows for light at the end of the tunnel, delivering powerful, emotional moments that inspire optimism for the future, rather than dwell on the traumas of the past.

Satterfield starts in Benin, where he’s met by the food historian and author of the book High on the Hog (upon which this series is based), Jessica B. Harris. Together, they explore traditional African cuisines and modern interpretations, tracing their use to before enslavement and identifying specific crops—rice, beans, tomatoes and spices—that have characterized the cuisine. Picking up a yam, or “a hairy elephant foot” as she calls it, Harris dispels a common misunderstanding, the first of many fascinating word origins the series brings to light. She explains that Americans came to call sweet potatoes (the orange-fleshed variety) yams because, historically, yams did not grow in North America, so the latter simply came to be accepted as the next best thing. Maybe it’s the multiple lockdowns, but small discoveries like that are thrilling to watch because they introduce new and profound ways of looking at food as a rich, cultural artifact.

To that end, High on the Hog celebrates Black food, while also honouring its preservation and resilience. We tend to take the automatic archiving of our lives for granted, but one can’t help but be acutely aware that in much of the world, knowledge still lives and dies with people and practice. Rooting that knowledge in food gives them power, which is precisely why uncovering these histories feels so empowering, like a long overdue inheritance.

The significance cannot be understated. In one powerful scene, Satterfield visits The Door of No Return, a memorial to enslaved Africans who were taken from the slave port in Ouidah, Benin to the Americas. Walking the same red clay road the enslaved were led down, he encounters a massive stone arch with carvings of shackled bodies being led away, breaking down into tears upon learning that he is standing on the remains of those who died. There are hardly words.

In later episodes, some revelations—like the fact that enslaved people created America’s agricultural wealth not just in cotton, but in rice—can shift entire worldviews. African slaves brought that knowledge from the continent, where rice is not only abundant but a dietary staple. Others, like the disconnect between Black people and oysters despite a history of working class Black oystermen in Staten Island, are fascinating in their commentary on systemic racism. Especially moving was the story of Gabrielle Eitienne, a modern-day preservationist in Apex, North Carolina keeping Black culinary traditions alive by farming the land and hosting community dinners. Living among multiple generations, her family faces displacement by eminent domain, a tool used by governments to remove residents from their homes for public projects (in this case, a superhighway), but also one of many systemic tools used to separate Black people from their land. Eitienne struggles to hold back tears as she talks about how her uncles, who have been there for decades, were only sold the land because it was considered undesirable and now, it brims with life. The anger and frustration is all too familiar—another case of Black people simply trying to survive.

The final episode, “Freedom,” brings us to Texas, setting the stage for some incredible stories about cakes, cowboys and the Church. Jerrelle Guy, author of Black Girl Baking, reveals a fascinating link between red velvet cake and Juneteenth, while serving some of the most beautiful food of the series, including a rustic apple pie with an almond and wheat flour crust (and a scoop of ice cream, of course). A deep dive into the culinary traditions of America’s first Black cowboys—that is, the noble sport of jumping off a horse to wrangle a young steer by the horns—charts new territory. It’s giving Lemonade, especially in the way music, both spoken and sung, casts a spiritual light on these cultural legacies that have endured for decades. It’s the highlight of the entire series and leaves you hungry to learn more.

All in all, High on the Hog is tremendously moving, beautifully shot and a much-needed corrective to the idea that Black food is simply soul food or fried chicken. You’d be hard pressed not to learn something, or more likely, shed a tear.

High on the Hog begins streaming May 26 on Netflix.