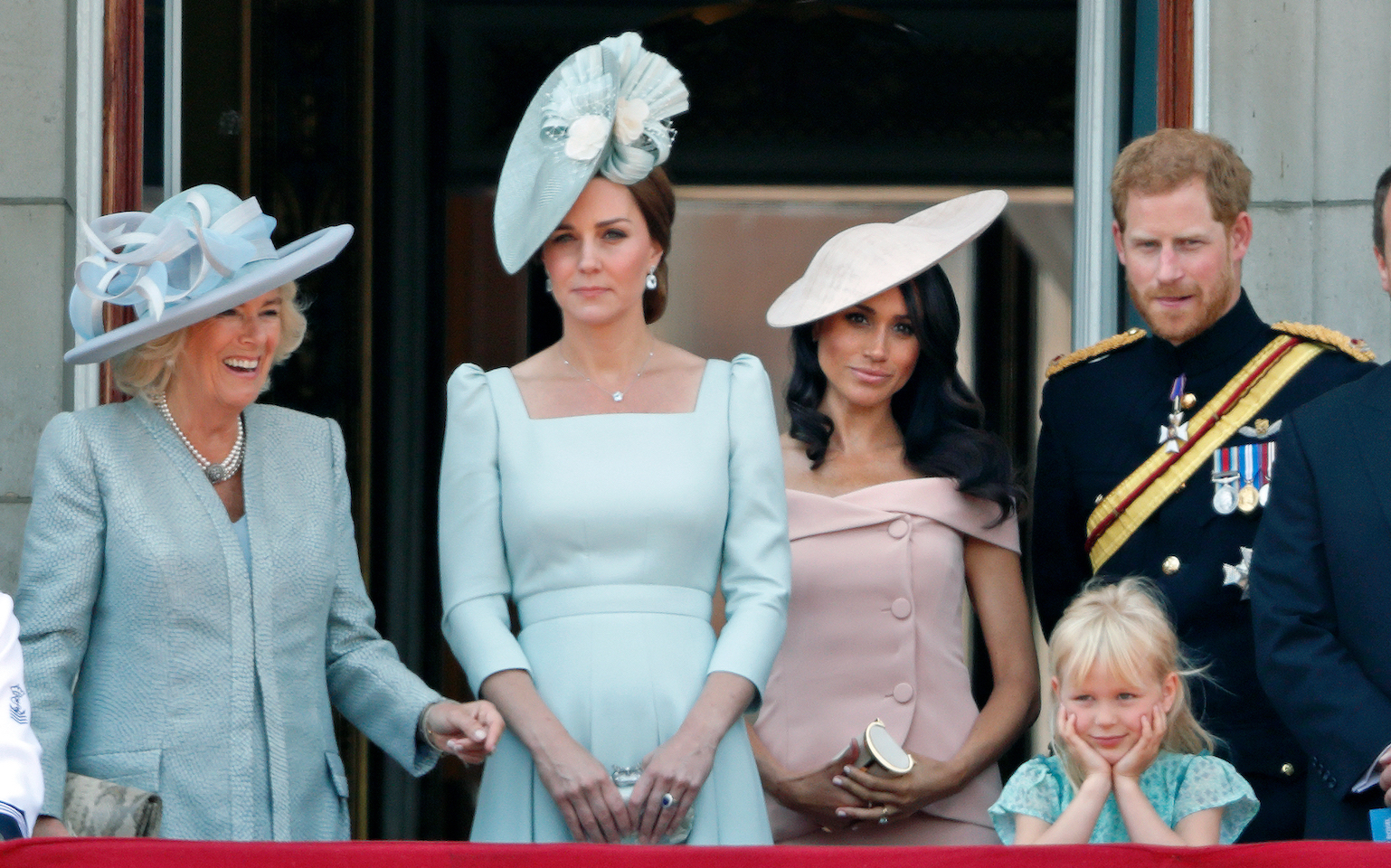 The Duchesses Cambridge and Sussex, a.k.a. Kate Middleton and Meghan Markle, at Trooping the Colour. Photo, Max Mumby/Indigo/Getty Images. 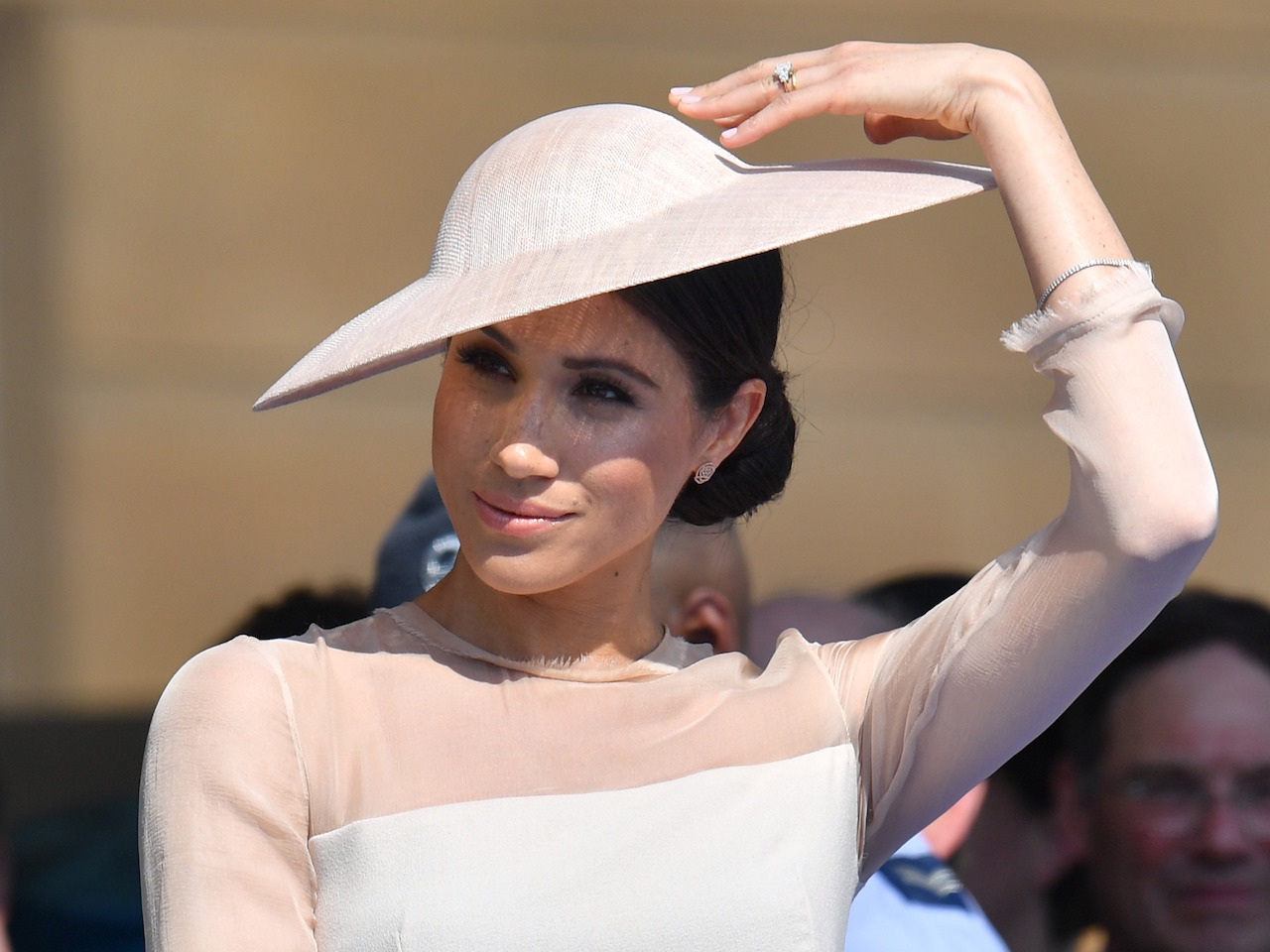 Is The Queen Really Sending Meghan Markle To ‘Duchess School’ For 6 Months? Where you heard it: The Daily Mail
The report: This case of the royal copycat is included in a larger report by established royal journo Richard Kay about Kate visiting the Beaufort Polo Club with her kids. For the relatively informal occasion, the duchess opted for a shoulder-baring summer dress. This, according to Kay, is evidence of, if not exactly a full on fashion rivalry, then at least an example of Kate being inspired to up her style game. The way the Mail piece connects the dots, Kate saw her sister-in-law in a shoulder bearing dress for Sunday morning’s Trooping the Colour (i.e. Meghan’s first royal balcony photo shoot), and then basically ran home to change into something similar for her Beaufort visit.
The smell test: If there is a case of copy catting here it runs both ways, since other pubs have reported Meghan turning to Kate for advice on managing fashion protocol. Also, the two outfits that the Mail is talking about are only similar in that they both include a little clavicle peep show. Otherwise, one (Meghan’s) is a pricey designer frock by Carolina Herrera, while the other (Kate’s) has a casual peasant vibe and is from Zara, which was probably planned day in advance by some sort of royal wardrobe consultant. Finally, if we’re talking about royals baring shoulders, both Duchesses Cambridge and Sussex are clearly of guilty of copying a Princess Diana signature. 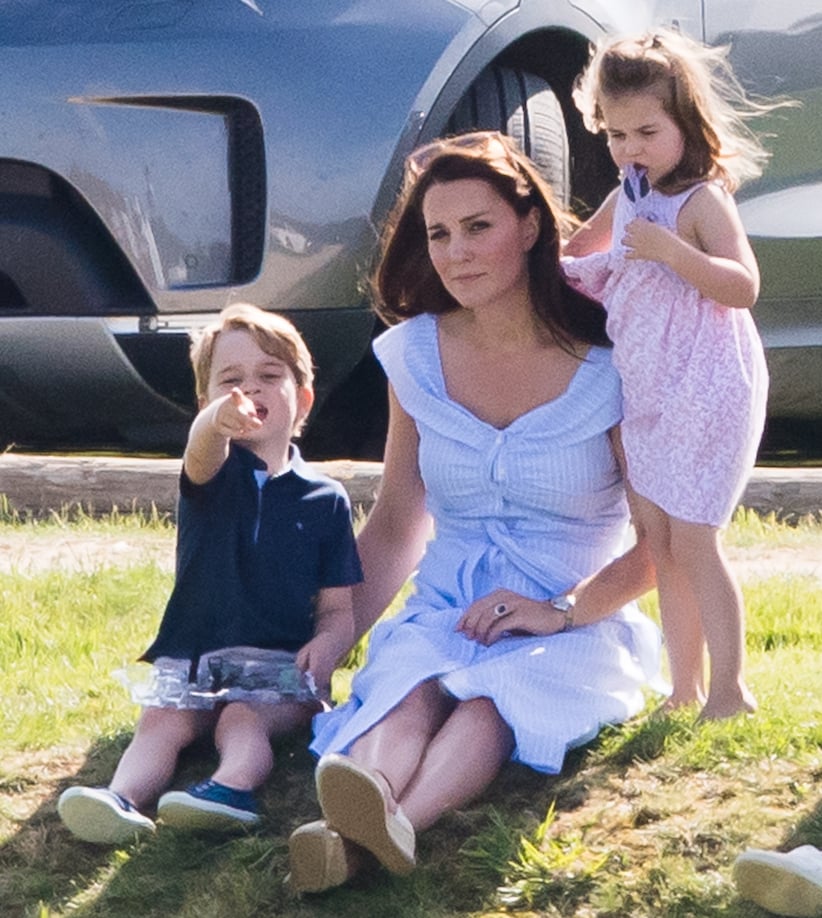 The rumour: Meghan Markle will call the Queen “Mama”

Where you heard it: The Mirror 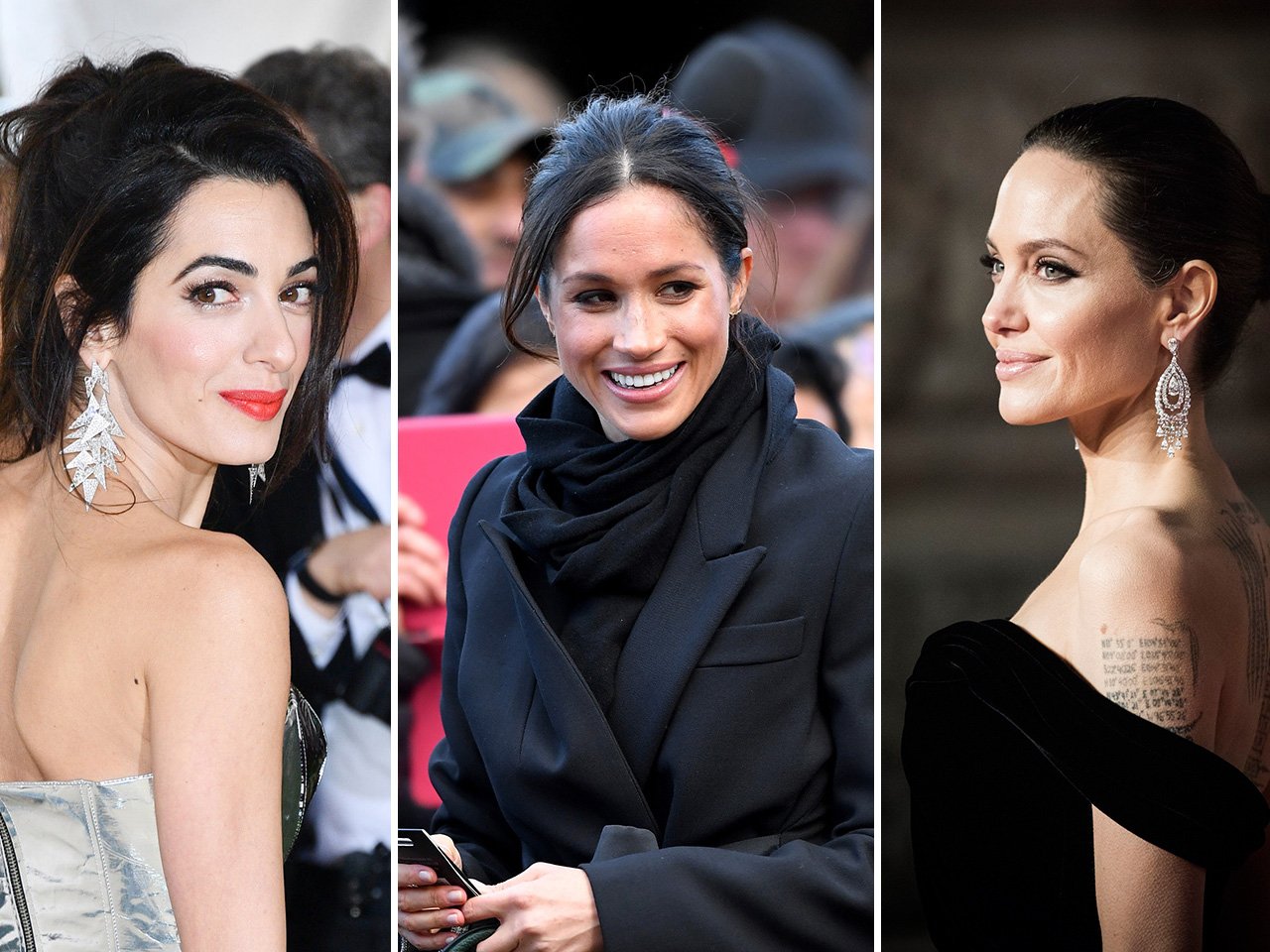 Is Meghan Markle At The Centre Of A Feud Between Amal Clooney And Angelina Jolie?
The report: HRH, QE2, You Majesty, Liz — England’s longest reigning monarch is a woman who goes by many names, and apparently we commoners don’t know the half of it, per this bizarre report. The article explains that Prince Charles refers to his mum as “Sausage” in private, while William sometimes calls her “Gary” (which started when he couldn’t pronounce granny). As for what term of endearment Markle will use, royal expert Ingrid Seward speculates that the Queen’s new granddaughter will eventually refer to her as “Mama” (as Diana and Fergie did). It won’t happen right away, notes Seward, explaining that for now MM will address the Queen as Your Majesty, which will transition to Ma’am and then Mama.
The smell test: Based on the Mirror report and some Google detective work, the part about Di and Fergie referring to Her Majesty as “Mama” is accurate, but what nobody is sniffing out here is that the Queen was actually a mother to both of those women, or rather their mother-in-law. In which case, why would a granddaughter use the same term? Especially when there seem to be several superior options. (Sausage for the win!!!)

The rumour: Meghan Markle is missing her old life

Where you heard it: Radar Online
The report: It hasn’t even been a month since American actress Meghan Markle became the British Duchess of Sussex, but apparently the last few weeks have been enough to have her questioning her decision. This per an “unnamed palace insider” who claims that while MM is “madly in love” with her new hubby, she is less enamoured with all of the “too strict” rules and misses her life and friends in L.A.
The smell test: A few things to hold one’s nose at here, starting with the fact that if Meghan is missing her old life, it’s probably not her L.A. crowd since she spent the last six years in Toronto shooting Suits (woot!). Also, pretty sure that anonymous palace sources aren’t spilling the beans to a trashy U.S. tabloid, which means that this particular report smells as credible as horse dung in the middle of the post-wedding procession route. And yet… a certain amount of post-honeymoon period angst does seem inevitable — it may not have struck already, but it’s probably coming. Because yes, prince charming and all that, but a lifetime of hand-shaking and hat-wearing does seem like it would get old quickly.

The rumour: Prince Harry and and Meghan Markle could become King and Queen of Canada

Where you heard it: The National Post
The report: There’s no question that Canadians are crazy for all things Harkle (she is our adopted daughter, after all), and now a story in the Post suggests that we could actually select the Duke and Duchess of Sussex to be our nation’s monarchs… with a little help from Justin Trudeau. The so-called “King Harry theory” was devised by a Carleton University prof named Philippe Lagasse, who argues that Canada’s constitution gives executive authority to the Queen (and/or King), but does not stipulate that this monarch must be the same as the one reigning in the U.K. Loophole, technicality — whatever you want to call it, Lagasse says swapping Lizzy for her younger decedents would be as easy as a “section 44 constitutional amendment,” which requires a single parliamentary vote.
The smell test: While it’s tempting to imagine a Canada with Meghan Markle’s messy bun on the back of our quarters, there’s a big difference between theoretically possible and whether it’s ever gonna happen, and, in this case, all sings point to there ain’t no way. In the case of an attempted monarchial switch-a-roo, it is almost certain that the Supreme Court of Canada would intervene. Also — a successful swap would require the consent of the new ruler, which means Harry would have to betray his beloved granny (a.k.a. “Sausage”), and it’ll be a warm day in the Irish sea before that ever happens.

Watch: The Royal Family on the balcony at Trooping the Colour