What's Going On With Brad And Jen?

He showed up at her party over the weekend, which is enough fuel to keep the Braniston fires burning. So what does it all mean? And, more importantly, why on earth do we still care? 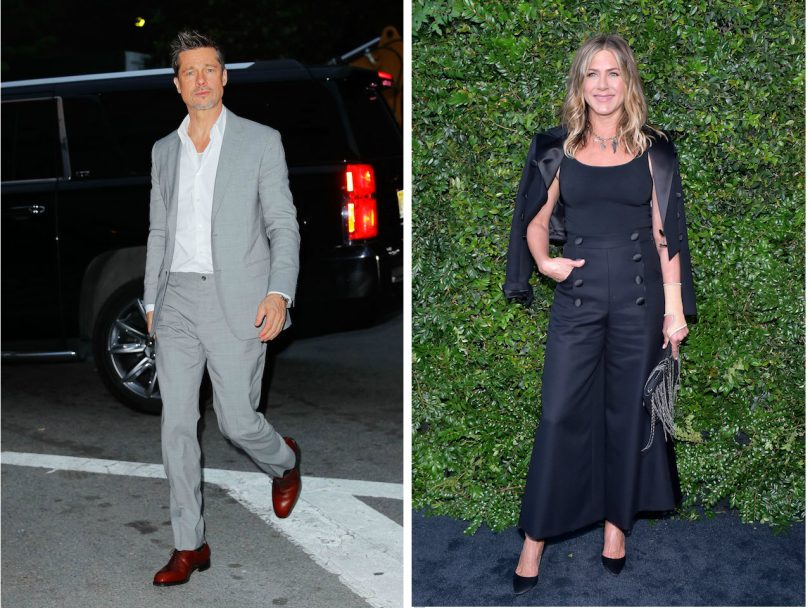 
Not surprisingly, this unanticipated reunion has sent the internet into a tailspin (time to break out that Team Aniston t-shirt!). But what is actually going on here? Might there be a glimmer of hope for hardcore Braniston shippers? And, after nearly 20 years, why do we in the name of banana milkshakes still care?*

(*Oh please, you care. If you got the banana milkshakes joke, you care a lot.)

First off: How do we know Brad was actually at Jen’s party? It’s not like the tabloids aren’t happy to make this stuff up.

It’s true that if you believed everything you read in the tabs, Brad and Jen have been engaging in secret reunions for years now (and are the proud parents of approximately 200 love children). Still, there are a couple of reasons why this story passes the sniff test. For starters, it was published in People magazine, a reliable source on this sort of thing. Secondly, there’s photographic evidence showing Pitt (or what appears to be the back of him), outside the Sunset Towers on Saturday night. A follow up story has a source telling People that inside the party Brad and Jen, “hugged and chatted for a bit.”

Yes and no. According to the same inside source, the b-day girl, “didn’t really pay any special attention to Brad,” since she was busy with the slew of A-list well wishers. Apparently she had debated whether or not to invite him, eventually extending an invite because, “the party was a celebration of Jen’s life,” and Brad had been an important part of it.

Okay, but why would Brad show up?

It does seem a bit off-brand for a guy who is constantly expressing a desire for privacy to do something so blatantly destined to make headlines. If he wanted to wish Jen well, he could have sent a card or arranged a meeting that wasn’t guaranteed to be witnessed by an army of paparazzi. Which is the other puzzling part of all of this. Why would Jen — a woman who owns a party-perfect private oasis in L.A — opt to throw her celebration in such a public place? One theory: she knew Brad was coming and wanted a story where he was the desperate, needy one. Another: this public-facing party was a soft launch for the return of Braniston, and there might actually be something going on here.

Stranger things have happened. Donald Trump, fake tan enthusiast and former host of The Apprentice is the president of the United States, and by that standard a Brad and Jen reunion seems at least semi-plausible. Both are getting older and have seen what else is out there. Brad in particular may find himself longing for the familiar comforts of banana milkshakes after the drama and stress of the last couple of years.

What does Angelina have to say about all this?

The woman blamed for breaking up Camelot hasn’t commented — at least not officially. She was photographed on a mother/daughter outing on Monday with her and Pitt’s daughter Vivienne. The untrained eye may see this as an unrelated incident, but since Angelina does absolutely nothing by accident, another interpretation might view her outing as a silent statement on priorities — i.e., while you’re out chasing your ex at bars, I am focused on taking care of our children.

With respect: why are we so caught up with a relationship that lasted for five years and ended more than a decade ago?

For those of us still following the Brangelaniston love triangle, the fact that it all happened so long ago is part of the appeal — a warm cup of yesteryear, the relationship equivalent of the Reality Bites soundtrack that sends us back to simpler times. But it’s not just nostalgia that explains why this particular coupling are the subject of so much sustained “shipping” fervour. The other part is Jen herself, a gorgeous, world famous, multi-millionaire who somehow became our generation’s everywoman. We are all Jen, which explains why “Team Aniston” t-shirts outsold the “Team Jolie” version 25-1, back in the day and also why we cannot stop rooting for her happiness.

But why does her happiness include getting back together with a guy who dumped her for Angelina Jolie?

For that you can blame outdated but insidious ideals about gender roles and female fulfillment. Stuff Jen herself has spoken out against: “The way I am portrayed by the media is simply a reflection of how we see and portray women in general.” Which is completely true and yet we can’t quite kick the idea that her ultimate happy ending involves a reunion with a human Disney Prince.

But I don’t even know these people. Really — who cares?

Here’s a 2018 story from The Cut that unpacks our ongoing obsession with Canadian Olympic champs Scott and Tessa and “shipping” in general. In it a psychologist explains how we are “not wired to differentiate between real relationships that we have with people and ones that we’re just reading about or hearing stories about.” This inability has only been exacerbated as the internet pumps out an endless stream of celebrity “news,” so that it feels normal to know more about the Kardashians than you do about your actual friends. It doesn’t actually matter if the information we receive is true or not, only that there is a lot of it. Which is creepy and weird and suggests the pending downfall of humanity. But in the meantime, at least we can blame science.