20 New Cheesy Holiday Movies To Look Forward to This Year

It’s almost the most wonderful time of the year—sappy Christmas movie season! Get cozy and grab a few shortbread cookies because we’ve rounded up all the best ones coming out this year.

1. Holiday in the Wild

Start your holiday movie binging with minimal snow and twinkly lights. After her son heads off to college, Kate (Kristin Davis) is ready for her second honeymoon. That is—until her husband announces he wants a divorce. So Kate heads off on a solo trip to Zambia, where she meets hunky pilot Derek, played by a swoon-worthy Rob Lowe. Soon they are rescuing a baby elephant and nursing him back to health. When Kate decides to stay through Christmas she starts to wonder if she ever wants to go home—and it’s not just the beautiful scenery that’s keeping her there.
Release date: November 1, 2019 on Netflix

Do Christmas wishes come true? Corey has always dreamed of becoming a theatre director. Instead, she kept a promise to her late dad to stay in her hometown, a tiny ski village, and put on the annual Christmas pageant. So she runs her mom’s antique shop and organizes the pageant every year—until Ryder shows up. He’s cute and charming and helps her realize she can do more.
Release date: November 2, 2019 on W Network

It’s a Christmas emergency! The Merry & Bright Candy Cane Company isn’t doing well. Gabe arrives in Candy Cane land to help make the company more profitable, but CEO Cate (Jodie Sweetin) mistakes him for another one of her mom’s matchmaking attempts. It’s a merry mixup. While the two definitely don’t get along at first, they soon find a groove. That is until their deal goes south. Cate starts to wonder if she needs a Christmas miracle to save both her love life and her business.
Release date: November 2, 2019 on W Network

A classic part of every Hallmark Christmas movie is a festive contest—a cookie crawl, an obstacle course in the snow or a decor-off. And this year there is a holiday scavenger hunt. Belinda is home for Christmas and of course the town’s annual scavenger hunt. And who is on her team for the main event? Her ex, Dustin. Things just got very complicated, especially if there’s mistletoe involved.
Release date: November 3, 2019 on W Network

Kate (Emilia Clarke) is a very grumpy elf in a year-round Christmas shop. She has a good reason to be grumpy, though. Last year she got very sick and nearly died. Now, her boss calls her Lazy the Elf, she’s drinking a bit too much and she can’t seem to break this string of bad luck. Until she meets Tom (Henry Golding), who she literally keeps running into. His saintly personality is off-putting, but also a wee bit inspiring. Before she knows it, she’s volunteering at a shelter and singing in the streets. Is do-good Tom too good to be true? In the words of George Michael, who inspires the soundtrack, you gotta have faith.
Release date: November 8, 2019 in theatres

Looking for a little teen romance this holiday season? Enter this winter wonderland based on John Green’s bestselling novel of the same name. It’s Christmas Eve and a massive snowstorm has hit, causing slight chaos for a bunch of high school seniors. There’s a stranded pop star, a dance party at the Waffle Town, a mysterious woman covered in tin foil and so much romance brewing.
Release date: November 8, 2019 on Netflix

What if you celebrated Christmas every single day? That’s what Will (aka Mr. 365) does. There’s wrapping paper, gingerbread houses and twinkle lights galore. And that’s all a bit much for reality producer Sophie, who is making a show about Will. But even she can’t resist his Christmas charm. Her boss can, though, and wants Sophie to make a show about how dysfunctional Will is. Can Sophie betray Will and all the good he does?
Release date: November 9, 2019 on W Network

The Christmas season can be tough if you’ve lost a loved one. Dr. Sharon Hayes studies grief but that didn’t prepare her for the death of her grandmother or the fact that a year later she has to go home to deal with her estate. There she meets Sam, her lawyer, who is grieving his late wife. As Sharon struggles with being back home, she focuses her energy on a Christmas ornament—the two turtle doves ornament that according to family legend makes two people fall in love. Will Sharon, Sam and his daughter be able to find the missing ornament? And is the legend real?
Release date: November 9 on W Network

This holiday romance doesn’t start over eggnog or mulled wine, but coffee. Audrey owns a coffee shop in Connecticut and sends bags of coffee overseas to her brother in the military. He shares it with First Sergeant Matt Evans, who writes a thank you letter to Audrey. That starts a year-long exchange of letters. And then Matt gets stationed in Connecticut and walks into Claire’s coffee shop. Someone get the mistletoe!
Release date: November 10 on W Network

There’s a real Scrooge in Emma Sanderson’s life—her boss. She’s landed a temporary job at a magazine and has a great story for the cover. That is, until her boss steals it. Never fear, Emma (Tamera Mowry-Housley) is determined to find a new story, and she has two helpful elves on her side—her son and the very charming staff photographer.
Release date: November 16, 2019 on W Network

11. Christmas Under the Stars

Nick is a hunkier version of the Grinch. He’s a self-centred investment banker, who is very focused on his job. Then he gets fired. So he takes a job at a Christmas tree lot where he meets Julie, an astronomer. Soon selfish Nick starts getting into the giving spirit, especially when he discovers that Julie and the tree lot owner are down on their luck. Now, he’s determined to give everyone a perfect Christmas under the stars.
Release date: November 16, 2019 on W Network

To All The Boys I’ve Loved Before. Jessica finds herself suddenly single and decides to send Christmas cards to five important people in her life—though they’re not all romantic. She sends one to her aunt who raised her, her brother in the military, the music teacher who inspired her, the pop star who she loved and her best friend who she always could count on. The letters inspire all five people to act. And romance is definitely on the way for Jessica.
Release date: November 17 on W Network

13. The Knight Before Christmas 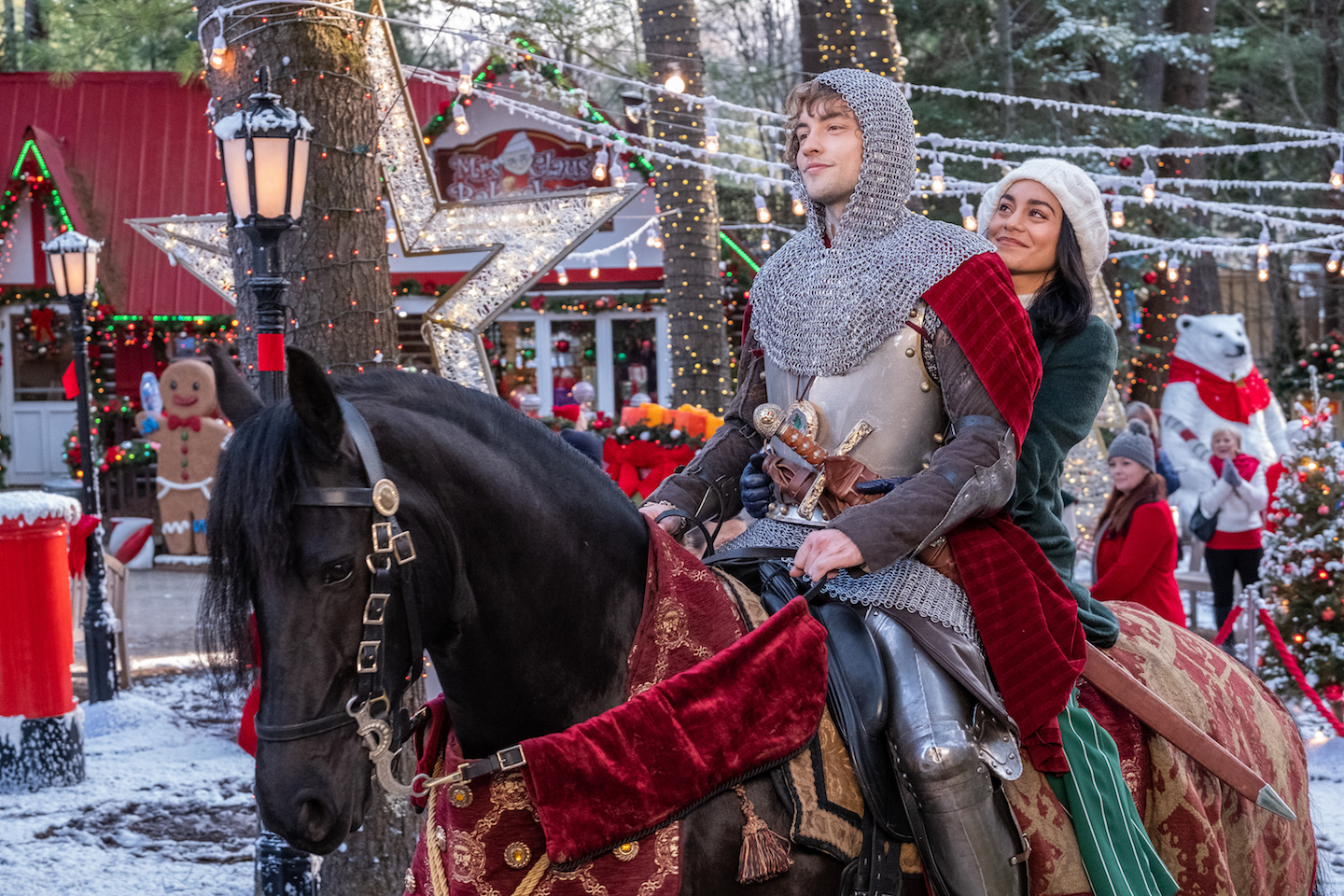 Last Christmas, Vanessa Hudgens brought the holiday feels as a princess and a baker in The Princess Switch, and this year she’s a science teacher in The Knight Before Christmas. Brooke is disillusioned by love until her knight in shining armour shows up—literally. Sir Cole, a medieval knight is transported to modern day Ohio by a magical sorceress. And now Brooke has to help him complete his quest so he can return to his own time. Except Sir Cole is utterly charmed by Brooke (and probably Christmas cookies!) and starts to wonder if he really wants to go back.
Release date: November 21, 2019 on Netflix

14. Christmas at Graceland: Home for the Holidays

You don’t need to be a fan of the King to watch Christmas at Graceland—you just need to enjoy sweet romances and Adrian Grenier. He plays Owen, a wealthy widower in need of a nanny. In swoops Harper who is back in Memphis for the holidays. Harper is spontaneous and Owen loves structure, so things are a bit rocky at first. Soon though, Harper has Owen spending more time with his three kids and he helps her gain more confidence. The more time Harper spends here, the more she starts to wonder if she really wants to leave.
Release date: November 24, 2019 on W Network 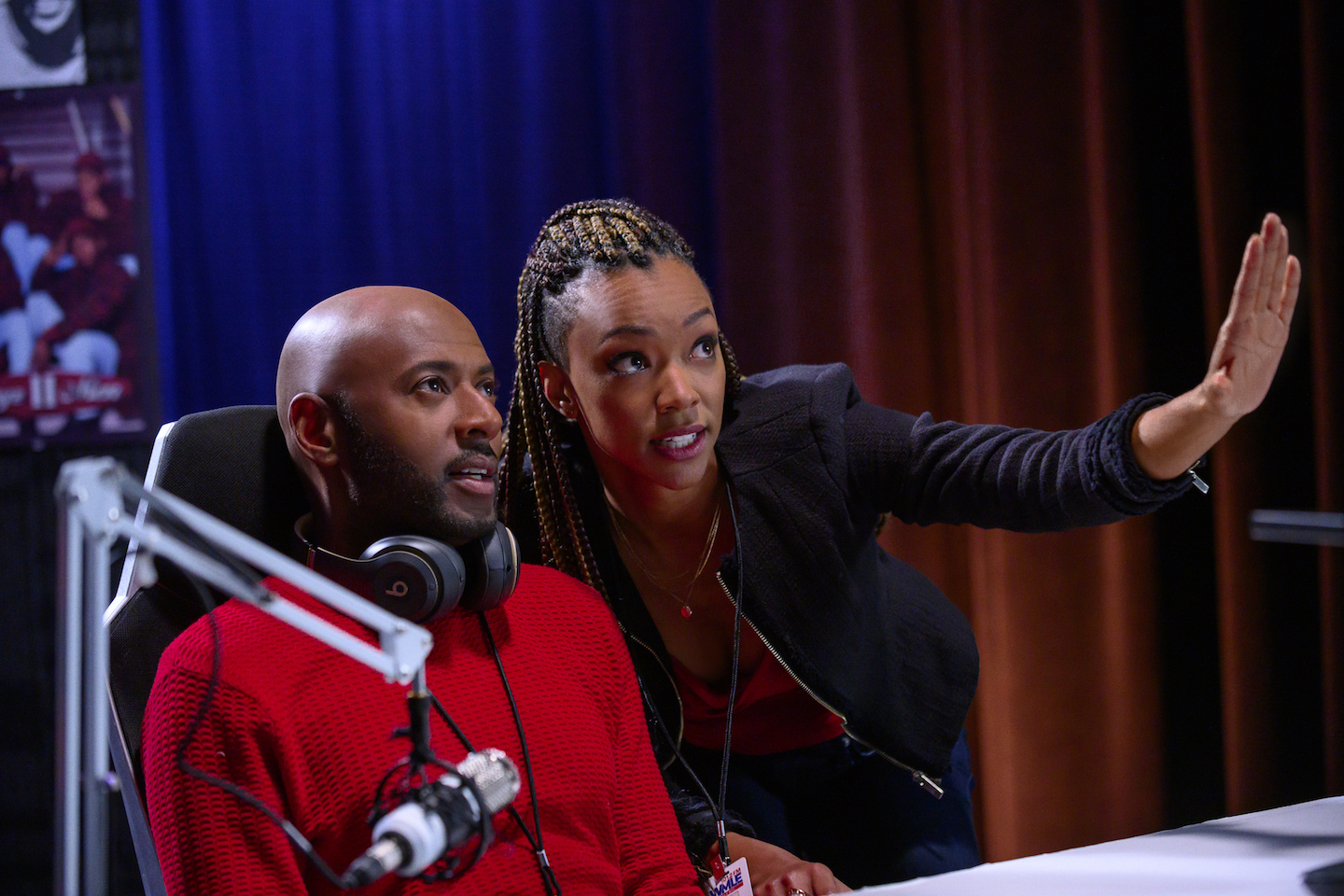 The holidays are all about presents for kids. And DJ Rush Williams has really been spoiling his since his wife passed away. His kids have their wish lists ready—and then Rush loses his job. His producer Roxy and his Aunt Jo help him come up with a plan to buy a new station, except the family has to downsize quickly in order for it to work. This simpler life is a big change for Rush and his kids. With a little Christmas magic though, it might bring them closer and maybe even lead to a Christmas romance.
Release date: November 28, 2019 on Netflix

Get ready to practice your “Fa la la la las” in this cheery film. Averie and Jesse were a singing duo famous for their song “Wouldn’t Be Christmas.” They stopped making music together years ago and went their separate ways—Averie to the cozy lodge she’s opened in Vermont and Jesse to solo touring. Since this a Hallmark movie, it’s years later, the two got stuck together at Averie’s lodge and a little Christmas magic just might bring them back together.
Release date: November 29, 2019 on W Network

17. A Christmas Prince: The Royal Baby 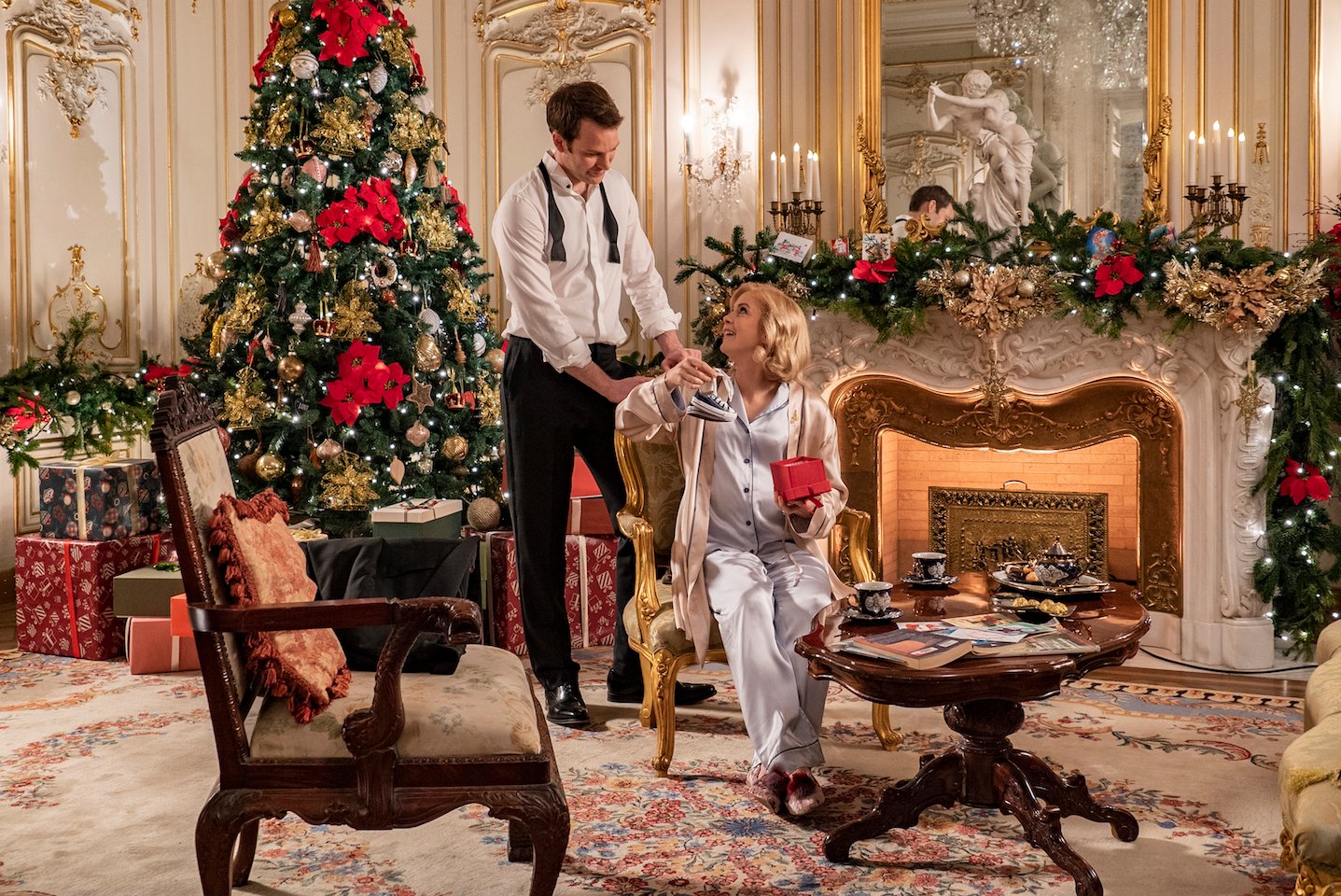 If you’re a fan of Netflix’s A Christmas Prince, then you probably guessed by the end of the second movie that a royal baby was coming. Queen Amber and King Richard are getting ready for their little one’s arrival and some much-needed time off. Before paternity leave can start, they must host King Tai and Queen Ming of Pengila to renew a 600-year-old truce. Major problem though: The treaty has gone missing, the truce hangs in the balance and there’s a curse! The country doesn’t need a Christmas miracle because Amber’s determined to find the treaty thief before Christmas eve—and before she goes into labour.
Release date: December 5, 2019 on Netflix

Last year, there were two Christmas adaptations of Pride and Prejudice (Christmas at Pemberley Manor and Pride, Prejudice, and Mistletoe—both worth a rewatch), and this year Jane Austen fans get a jolly version of Sense and Sensibility. Ella, the fun-loving sister, and Marianne, the responsible one, own a party planning company. They have to plan a fancy soiree for Edward, the serious CEO of Ferris Wheel Toys. Edward likes things polished and doesn’t celebrate Christmas. Can he handle Ella’s holiday-loving ways?
Release date: December 7, 2019 on W Network

Prepare yourself because Dolly Parton is in a Christmas movie! It’s a holly-jolly Dolly. The movie stars Hallmark-favourite Danica McKellar as Rachel, a Broadway producer whose holiday show suddenly goes bankrupt. Luckily, a friend asks her to come produce a Christmas show in, you guessed it, Dollywood. Slight hiccup: Rachel and her producing partner Luke have very different ideas about how the show should look. You know what they say—opposites attract, especially in Dollywood.
Release date: December 8, 2019 on W Network

20. Christmas on My Mind

Lucy’s got a few problems. First, she just woke up and can’t remember anything that happened in the last two years. Second, she has a wedding dress in her hand. She assumes she’s getting married to her boyfriend Zac. Wrong! He’s now her ex and she’s engaged to another man. Someone get Lucy some comforting gingerbread cookies, stat. Thankfully, Zac isn’t going to leave Lucy to fill in the blanks by herself and takes her on a trip down memory lane. But even if Lucy’s memories aren’t coming back, old feelings certainly are.
Release date: December 21, 2019 on W Network